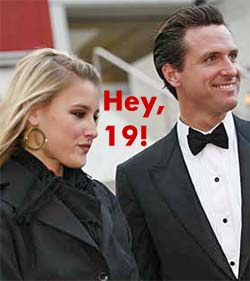 Another political sex scandal for the media to ooze all over. Golden Gate-boy Gavin Newsom has questionable ethics when it comes to his personal life. The affair with his good friend and campaign aid's wife was politically suicidal, but then dating a 19-year-old (when he's 39) is just kind of gross. I mean, ewww. All us voters have always distrusted his helmet hair. Somehow this confirms our worst fears. Sanctioning gay marriage was very cool and rebellious but now heterosexual urges have created a possible glitch in Gavin's plan for world domination. We are all human and we all have failings. But luckily for most of us, they tend to take place out of the public domain.

I'D never kiss and tell, but I have had questionable relationships in my past. Since I can't reveal the gory details, I thought I'd just list a few movies that I saw with my past b-friends and let the movies speak for themselves about the relationships. This all occurred in my weird little brain when I started thinking about first dates, which tend to take place in a movie theater, and whether or not the first film you see with a potential love-mate will somehow end up defining that relationship forever on. I'm not sure if my theory is correct, but here's a list of films to ponder.

Fade to Black - Dennis Christopher's follow-up to the sleeper hit, "Breaking Away." I'm sure this was in the can and ready for drive-in distribution when "Breaking Away" started generating critical acclaim and enough cash to become a respectable hit. "Fade to Black" wasn't going to further Christopher's career and probably set him waaaay back to actor's square one: waiting tables. The tag line: Eric Bindford lives for the movies...Sometimes he kills for them too! The title character dressed up as classic Hollywood horror fiends to do his evil bidding. It should have been a schlock-fest but it was really dark (I mean, muddy-looking), stupid and boring. Oh, was I talking about my love life, or a movie? I'm getting confused.

Jaws 3-D, stars another "Breaking Away" alum, Dennis Quaid, as the guy who has to save Sea World from a great white shark attack. In 3-D. Again, this should have been great but instead it was just really disappointing, stupid and uncomfortable to sit through. I was embarassed to be involved, actually. Oh well, nice try--extra credit for making it 3-dimensional. Sometimes things that should work out, fail spectacularly.

Hey, what was it about "Breaking Away?" By 1993, one of its other stars, Jackie Earle Haley ended up in "Maniac Cop 3: Badge of Silence" before his career as a pizza delivery man was stopped cold by his role as the creep in "Little Children." Good for him. He was so good in "Bad News Bears" and yes, even in "Losin' It." A funny Sinatra fanatic--who knew he had it in him? And I see on the Internet Movie Database that Dennis Christopher eventually got some Deadwood episodes under his belt. Even Dennis Quaid redeemed himself by playing an excellent Doc Holiday to Kevin Costner's dullard, "Wyatt Earp." OK--there's no "Breaking Away" curse. Good to know. There's hope for us all.

Back to the first-date movies:

"Invasion of the Bee Girls" - Seen in an artist's "loft" party in San Francisco in the 80s. Cheap, tawdry, humorless, would-be camp. "They'll love the very life out of your body!" When the bee girls (women, actually) take off their huge designer sunglasses, their eyes are solid black! Not such a turn-on, ultimately.

"Rumble Fish" - It's in black & white, excpet for the fish, which are saturated color. Mickey Rourke mumbles incoherently while Matt Dillon mutters, inarticulate--almost mute. Diane Lane looks pretty and kind of lost. The guy sitting next to me during this movie had seen it at least seven times. An unfathomable mystery, not worth solving.

My husband and I can't agree on the first film we saw together, but the one that sticks in my mind is "All About Eve" at the Castro on my 29th birthday. A film about an aging actress and her devoted husband, riding out the bumpy ride of a life in the arts, and that back-stabbing little tramp, Eve. SPOILER ALERT: In the end, Bette Davis' Margo decides to quit the theater to become a "proper" wife and mother. Hmmmmmm. Not sure how this one will play out but what great dialogue! And Marilyn Monroe even shows up and she's damn funny too. I guess I got pickier about films over the years. I try to spend my time with the good ones now. Either that or we're gay. Or at the very least, very gay-appreciative. It's win-win.
Posted by Miss Lisa at 4:01 PM 2 comments:

Email ThisBlogThis!Share to TwitterShare to FacebookShare to Pinterest
Labels: political muddle, the mooovies 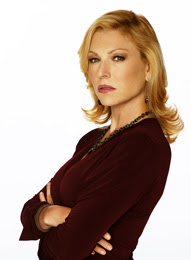 I've kind of gone off the television deep end in order to watch Tatum O'Neal's new telenovela "Wicked, Wicked Games." It's on EVERY night at 9 pm on "My Network TV," which reminds me a lot of George Carlin's old routine about how ladies used to call their soap operas "My stories." As in, "Can't talk now, my Stories are on..."

I manage to catch 12 to 15 minutes of Wicked, Wicked Games (WWG) almost every night. I don't watch the Saturday wrap-ups so I'm not completely lost, but I do enjoy Tatum's portrayal of Blythe Hunter, a real estate magnate who plots ceaselessly to destroy her former lover because he betrayed her 25 years ago by marrying a wealthier woman. How she does this is not important, nor is it plausible or even that interesting. What's interesting is watching Tatum O'Neal grimace, sneer, laugh maniacally, seethe, brood, toss her hair and GRIN. She grins through most of her manipulations and it's downright scary. I'm not sure what dental work she's had over the years, but her teeth are extremely white, even, and LARGE. Carnivorous is the word. I wish I could find a photo of her "acting" in one of these scenes. I'm highly addicted to her insane interpretation.

She also gives the best dirty look of anyone born and raised in Hollywood and put on screen for our entertainment. Just look at that puss! It's what won her the Oscar at age 8 for "Paper Moon." I snuck into a theater with my cool friend Pam (who later became a volley ball champ and lesbian) and we saw "Paper Moon" while we were the same age as Tatum. "Paper Moon" is one of those films that is NOT made for children whatsoever. It's all-adult themed, all the time. And it's hilarious and bizarre. It probably made me what I am today (pretty much). Anyway, thank you Tatum. You deserved that Oscar.

So you see, I'll follow her career to the ends of the earth, apparently. Reading up on WWG, I found out that the show is produced just like a Spanish telenovela and will only run for 13 weeks then never will be seen again on television. That's good, because if she kept acting as Blythe, I'm sure Tatum would have an aneurysm by season 2. It also explains the completely over-the-top nature of the show and the ridiculous story-lines that barely make sense. But who notices all the other actors anyway when there's TATUM grinning and seething and beating Debbe Dunning (that "Tool Time" woman from "Home Improvement") to a pulp in the middle of an expensive bridal shop. According to her show bio, Debbe also starred in "Leprechaun 4: In Space." She's about as good an actress as you can imagine, so thank you Tatum. Your work is top-notch as always.

I do have to mention "Deadwood," which is my new favorite obsession and available on DVD. Season 1 should really be called "Deadpan" since all the best characters have such a high degree of talent in this area. Especially Keith Carradine as Wild Bill Hickok. Here was a man, indeed. HBO is really churning out the quality pay-TV. When I watch "Deadwood" I just start swearing for the rest of the week (in my head, mostly) and it gets me through the hard times. And the clothes are to die for. Even the ripped, dirty ones--still stylish. Like punk rock in the wild west. There are plotlines that definitely remind me of living in Oakland, which is often lawless and randomly violent as well (no gold rush though). But mostly it reminds me of Shakespeare because it's big and historical and human in scope--with plenty of good swearin'.
Posted by Miss Lisa at 10:24 PM 2 comments: