Among 100,000 people in Oakland, I managed to meet up with my friend Joy and my family members from Seattle and San Francisco. Then our phones collectively and figuratively blew up due to mass usage and anyone else we knew, we bumped into the old-fashioned accidental way. That was part of the magic. Never have I been part of such a large protest and never in my long protesting history has a protest been this peaceful and joyous.

There was music, laughter, dancing, sign-waving, adorable babies, people in wheelchairs braving potholed terrain, BART delays, shuffling progress due to walking the streets alongside SO MANY PEOPLE—of all ages, backgrounds and affiliations. It was uplifting to be with one another, walking in sunny Oakland.

This administration is without a doubt our nation's shittiest (and that's saying something), but they are the minority, and they gained their power through subterfuge and gerrymandering. We are the majority and we will prevail. That's not rhetoric. That's a fact. As a wise man (Jerry Springer—surprise!) once said, "Liberals always win (in the end)."

Some dancing in the streets courtesy of the fabulous drumline from SambaFunk!.


Snippets, shot hastily while in a protesting glow.


Some photos of the day. 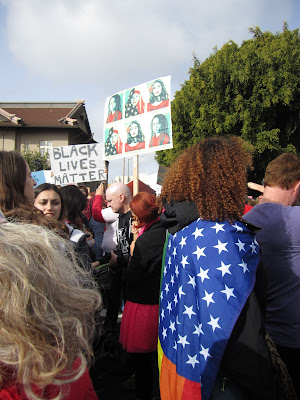 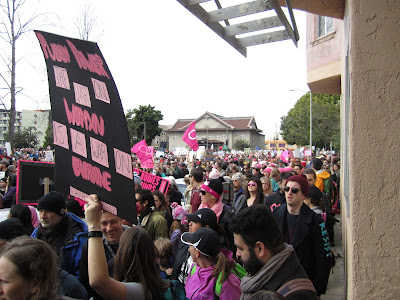 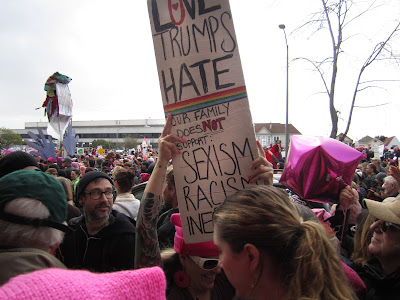 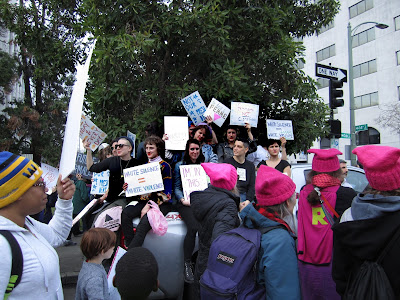 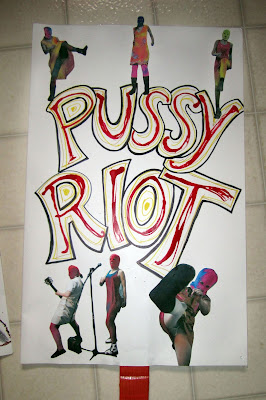 My friend Sherry LaVars, who shoots for the Marin Independent Journal, gave me permission to post some of her personal work here. Thank you, Sher. 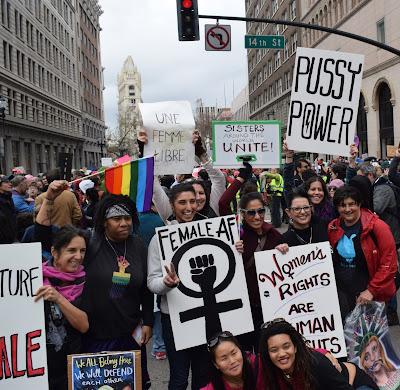 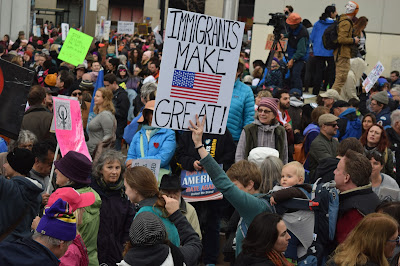 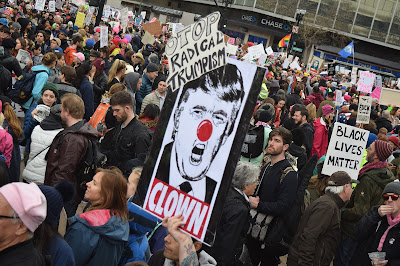 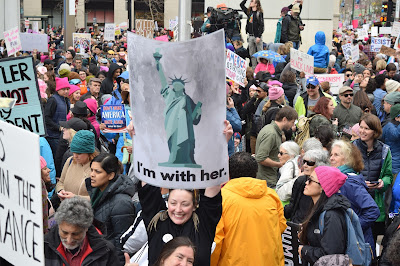 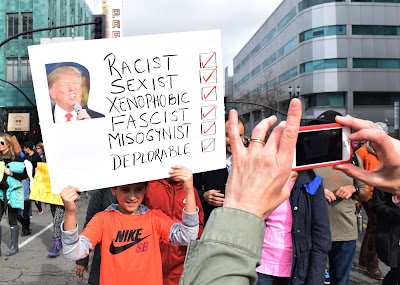 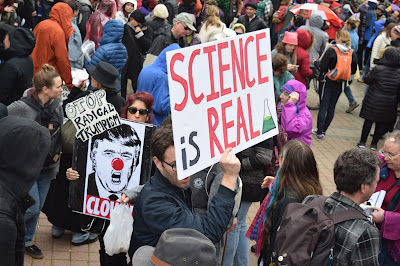 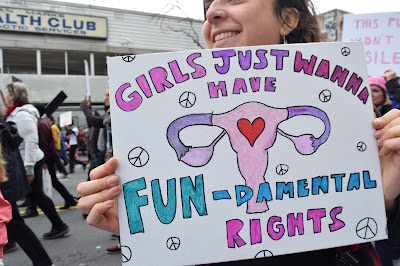 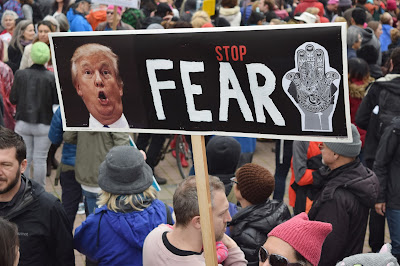 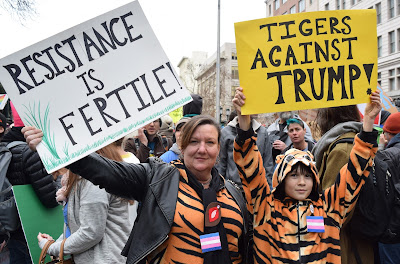 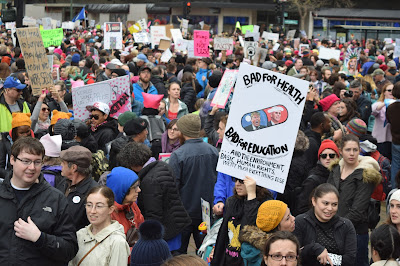 See you at the next march. If you can't make it, there'll be more.
Posted by Miss Lisa at 11:13 PM No comments: 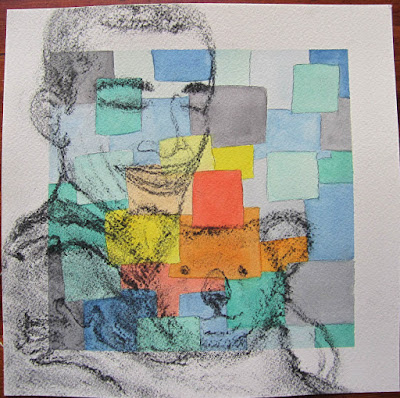 I know he's going to keep working for the greater good because that's in his DNA.
Posted by Miss Lisa at 2:46 PM No comments:

Email ThisBlogThis!Share to TwitterShare to FacebookShare to Pinterest
Labels: art for what ails ya, cool guys, political muddle

Charlie Watts Is Not Into It

Though I deeply appreciate Keith Richards' stellar rhythm-guitar stylings and Mick Jagger's commitment to prancing frontmanism, I believe at heart I'm a Charlie Watts gal. Out of all the Rolling Stones, he's the one who seems the most decent and forthright as a person and a drummer. The way he calmly and competently holds that left stick, like a groovin' jazz cat that's been accidentally time-traveled into a rock band—how does he do it? He's like a MAGICIAN! Plus he's been married to his wife for close to 150 years, he raises horses and he's always had killer style.

Part of that style is his psychological remove from whatever's going on within the Stones, and a lot has gone on within the Stones (read Rich Cohen's The Sun & The Moon & The Rolling Stones for an excellent take on that). Watts' intelligence seems tuned to a wavelength set to "healthy distance," and he's calibrated that distance with wit and reasoning skills in order to survive the ongoing juggernaut that is his band. Richards and Jagger were smart to hang onto Charlie Watts because he's just Not Into It and that's probably saved them all on more than one occasion. Witness his skill-set in these fabulous Charlie Watts clips.

An in-depth 1966 interview with Mr. Watts ends with a whimper when the off-screen questioner wants to know Charlie's take on how sex affects a band's sound and psychological impact. "You could sing about sexual intercourse all night," says Charlie, noting it wouldn't matter to anyone unless you happen to be very attractive. Then he admits that the whole thing is a bit shallow and nauseating. That's because Charlie Watts, even at the dawn of The Rolling Stones, Is Not Into It.

In Jean-Luc Godard's "Sympathy for the Devil" footage from his movie of the same name you see everyone contributing their sonic "Whoo whoos" except for one man. Slightly obscured by the microphone, crossing his arms, with lips resolutely sealed, Charlie Watts stands in solidarity but refuses to sing—resigned while they whoo whoo more than 30 times That's Charlie Watts and He's Not Into It.

When grim-faced, small-handed bassist Bill Wyman married his 18-year-old girlfriend Mandy Smith after dating her for five years (do the math, then immediately shudder), Charlie Watts was asked for a comment at the wedding reception. Whereupon he said honestly, "I don't see it as a good match," before wishing his bandmate happiness and disavowing any knowledge of the entire affair ("I don't know anything about it.") It's clear to me that Charlie Watts Is Not Into It. Stick around for a classic Keith Richards exchange, punctuated by phlegm-filled laughter that says much about the day's events.

Top 10 Charlie Watts Interview Highlights is a clip worth checking out (yes, even if you have to open Facebook to do so). All you need to know about Watts' philosophy of fame and fortune is contained in Interview Highlight #3—Dryyyyyy wit and Not Into It.

Keith Richards and Mick Jagger are rock 'n roll's legendary glimmer-twin frenemy duo. Their on-again off-again partnership was truly off in the early 80s. An excerpt from Keith's audiobook, "Life," tells the story of that time when impeccably dressed Charlie Watts threw his "drummer's punch" at Mick. At five in the morning, Mick had drunkenly demanded, "Where's my drummer?" Charlie Watts Was Not Into It.

Email ThisBlogThis!Share to TwitterShare to FacebookShare to Pinterest
Labels: cool guys, the music is the message

Hi everyone in the USA. It's time to get political. I know modern living is not easy. Wages have not kept up with inflation and cost-of-living expenses, including housing, utilities, food and education. We have a generation of college grads mired in horrible debt. We have a huge population and not enough industry to keep us gainfully employed. Our coastal cities are slowly going underwater as ocean levels rise. And I haven't even mentioned the lunatic that was stupidly and probably illegally voted into office as our leader.

I will get to him in a moment.

Meanwhile, it's time to call your elected officials and tell them how our laws and regulations affect you and your loved ones and communities. I know, it's kind of a pain to squeeze this into your schedule, but it only takes a few moments and it's so satisfying. Sometimes calls can't get through on hot-button issues; voicemail boxes get full, people go out to lunch. Keep trying. Phone calls will be tallied by office staffers and those tallies go directly to our elected officials. They are counted. They do count. Your experiences and opinions will be counted.

Handwritten letters are also tallied. Get out your favorite pen and lovely stationery and write your missive. It's good penmanship practice for when the apocalypse comes and we're living in a dystopia where communications consist of string tied to two tin cans. Emails tend to get lost, but are better than nothing. I also use twitter and Facebook for messages of a personal nature. But phone calls to political offices are golden.

Are you out and about? This Medium article tells you how to use nonpartisan POPVOX's simple phone app to contact your Senators during the Senate confirmation hearings for Trump's proposed cabinet. Hearings started this week, with Sen. Jeff Sessions, Trump's pick for Attorney General. Here is my nonpartisan response to that: *GAG* It's not political—it's just a reflex I'm having.

BBC News - Answers the journalistic questions: Who? What? Where? Why? with nice accents

Al Jazeeza World News - It's not all about us

"19 Activists Who Are Changing America" - from The Huffington Post


Subscribe to these fine news outlets - a free press is a crucial part of oversight and checks and balances. On a budget? Try a digital subscription:

Brady Campaign To Prevent Gun Violence - There are 100,000 victims of gun violence in the U.S. every year - inhumane and unacceptable

Sierra Club - Protect our planet, the only one we have

Médecins Sans Frontières - Doctors Without Borders cares for people in the most desperate need throughout the world; this is holy work

You can do it! Don't bey shy. Use your voice - you're democracy in action!

The majority of American voters do not want Trump as President, spawning the title #NotMyPresident. Some people won't even say his name with the title of "President" attached. What if we call him by his own self-described criteria? Some sample titles, based on his own words: "Pussy Grabber Trump," "Higher IQ Than You Trump," "Potential Shooter Trump," "Groveler Not Mocker Trump."

Any more? Russia, do you want to weigh in on this one?
Posted by Miss Lisa at 12:17 PM No comments: