Suki (co-drummer in She Mob) suggested we make a video of every song on the new album Right in the Head. With our video budget of $0, that's actually a possibility. And it's a fun challenge. This one, of Joy's composition, "Bloodbath," was made from vacation footage at Burney Falls, California and Lassen Volcanic National Park. As I was filming the boiling fumaroles of Lassen's Bumpass Hell hike, I had this song going in my head. Those kinds of videos make themselves. I just aim the camera.

Email ThisBlogThis!Share to TwitterShare to FacebookShare to Pinterest
Labels: California, She Mob, the music is the message, today's video

It's summer! Time for geographical adventure and vacation photos! That aren't boring, I promise/hope. This summer, Keith is working a lot and airline-ticket costs are very prohibitive, so we've been visiting, as Jackson puts it, "The most desolate places of California," via car. Having already traipsed across Death Valley, Bodie, and the Eastern Sierras in the spring, we decided the time had come for Mt. Lassen.

Keith's been talking up Lassen for months now, but we had no idea what we were getting into. Lassen is a National Park that nobody I know has ever visited, nor do they have any idea what's there, other than a former volcano, nor do they know where it's located (southeast of Redding—now you know). I, until recently, was one of those people. The park's motto, Explore the Undiscovered, is apt. [Update: turns out a friend has been to Lassen, twice, but she never told me, so the above paragraph still stands.]

But now I know more than most because we ended up visiting the park twice in two weeks, due to my losing my camera (at Lake Helen, one of many volcanically formed lakes) during the first visit. A kind, honest camper found it and turned it in, anonymously, so to you, whoever you are, THANK YOU. Thank you, thank you, thank you.

I had no idea I was so attached to my little orange Canon PowerShot until I lost it, full of Lassen photos (and videos—this tiny camera also takes decent video), so we appreciate your turning it in to the lost & found. Note: if your lost item ends up in a National Park lost & found, the park will mail it to you—our tax dollars at work. But I felt the need to retrieve my camera, due to its delicate nature. Plus, visiting Lassen again—worth it.

First, a visit to nearby McCloud and Burney Falls. We're waterfall aficionados, having lived by so many of them in SW Washington state, but California is experiencing one of its worst droughts in a century, so we didn't think we'd get much of a waterfall experience any time soon. Wrong! Burney Falls is fed by underwater springs so potent, they never dry up. They form a sort of geological sandwich between layers of Earth's crust. That's right—water counts as a layer, at least around Burney. Look at all this water... 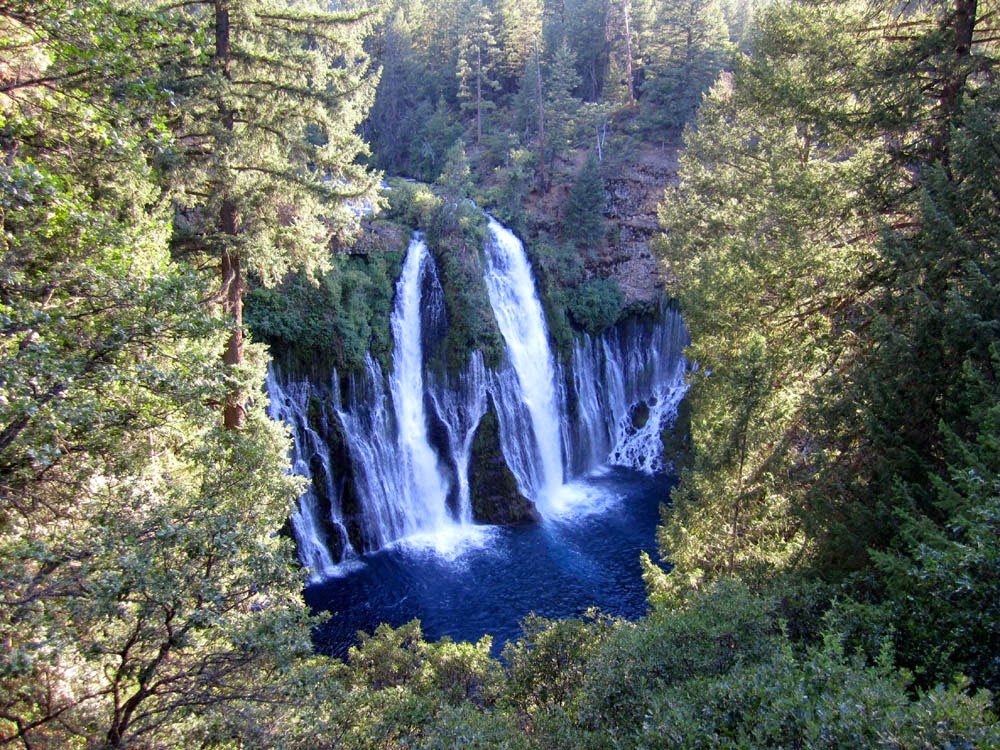 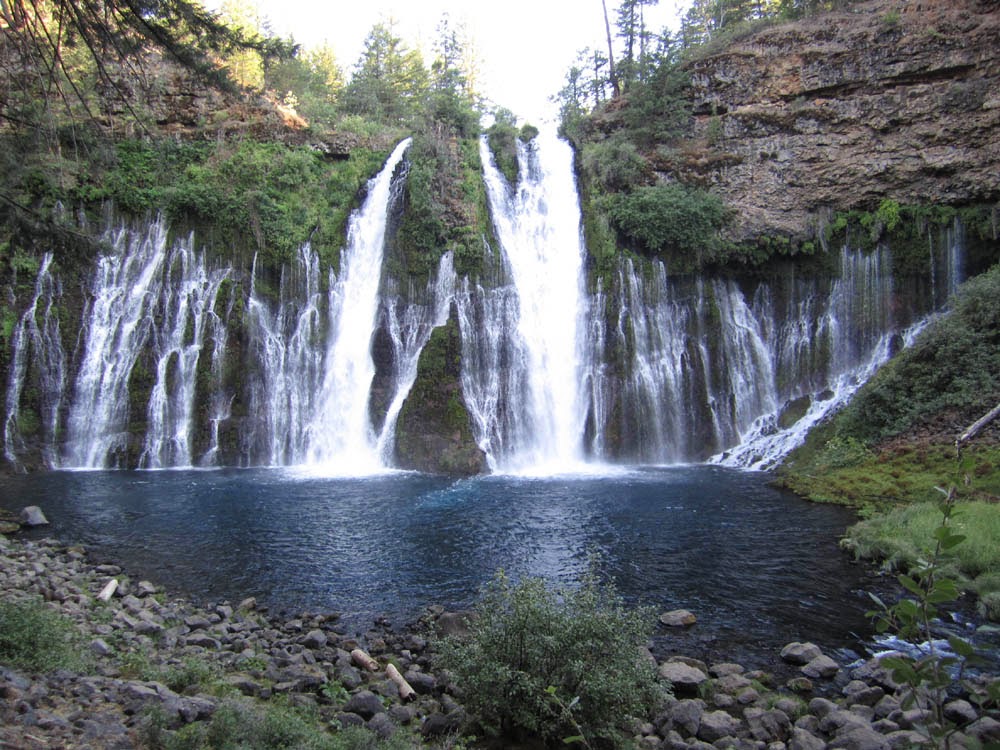 That's a lot of water. Watch out for falling rocks on your way down to the cool, cool pools, bridges and trails below.


McCloud has a three-tier waterfall and you can swim at two of its levels. We chose not to, but plenty of people were taking the McCloud plunge and they looked happy and refreshed. Not as spectacular and mind-blowing as Burney, but worth a stop, especially with little kids, older people, or people with decreased mobility. You can park at one of three lots, or walk the trail up and down. A very convenient waterfall experience.

Our stay in Burney was uneventful, and that's good for a motel by the road. There's also lots of cabins and campsites available throughout the area, but we wanted to crash and shower easily and efficiently after a long day on the road and several hikes.

What's in Lassen? Before you enter the north side, if you crave traveling through a thousands-year-old lava tube, stop by Subway Cave. It's a cave that's very much like a subway tunnel, with former lava chunks dotting your path. It's also really cool in there, temperature-wise—perfect on a hot day. You go in and pop out a third of a mile away. Happy lava travels.


Pack your bathing suits because there's plenty of lakes in the park. Pristine, glass-like, volcanically formed lakes full of various shades of blue-green water. So refreshing.

A three-hour round-trip hike will reward you with three mountain lakes—Terrace, Shadow and Cliff (we didn't get to Cliff due to time constraints and a kid who hates hiking). Why are there three beautiful, swimmable lakes so close together in one mountainous area? Because it's that kind of park.

Then there's Lake Helen, just off the main road. This is where I dropped my camera and we drove off, not realizing it was missing for a few miles. Oh, the anxiety! This is another, park-and-swim lake. Just lakes everywhere you go, as if we were in Minnesota or something.


Devastated Area Interpretive Trail has plenty of volcanic background story and gigantic tossed rocks from the last huge volcanic explosion of 1915. Anyone can do this walk. It's flat, short and paved. 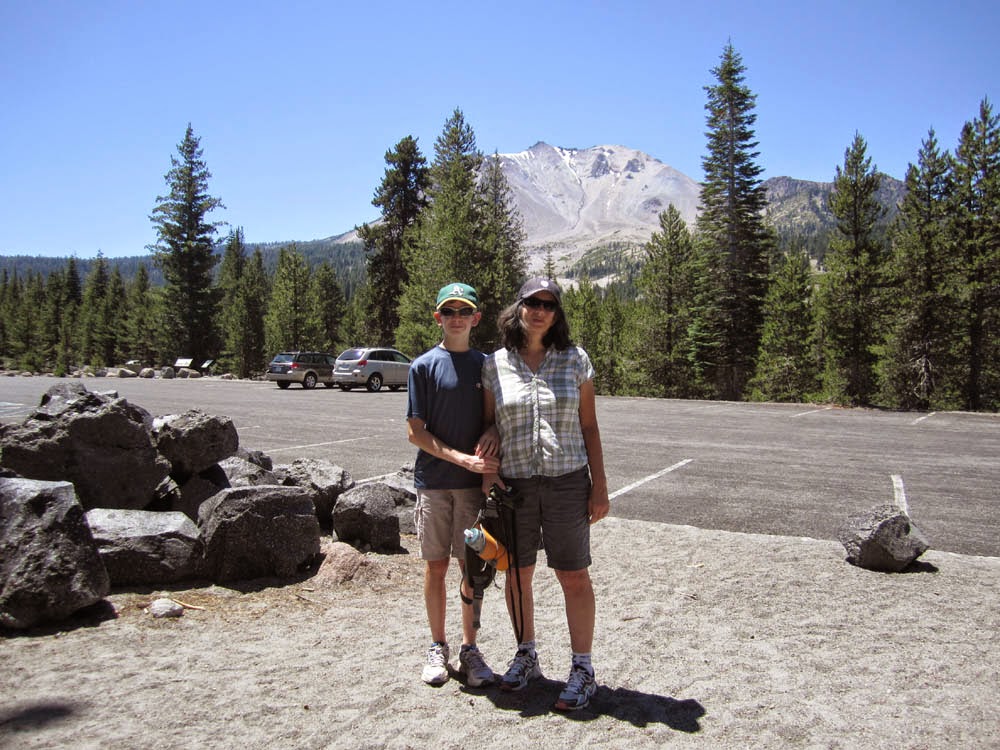 Plenty of mountain peaks throughout your journey. Plus July is the month for wildflowers. We had no idea. We just stumbled upon all these flowers, especially on the hike to Kings Creek Falls, which starts on a hillside before heading toward multiple meadows with the creek flowing throughout the trail before you get to the falls. 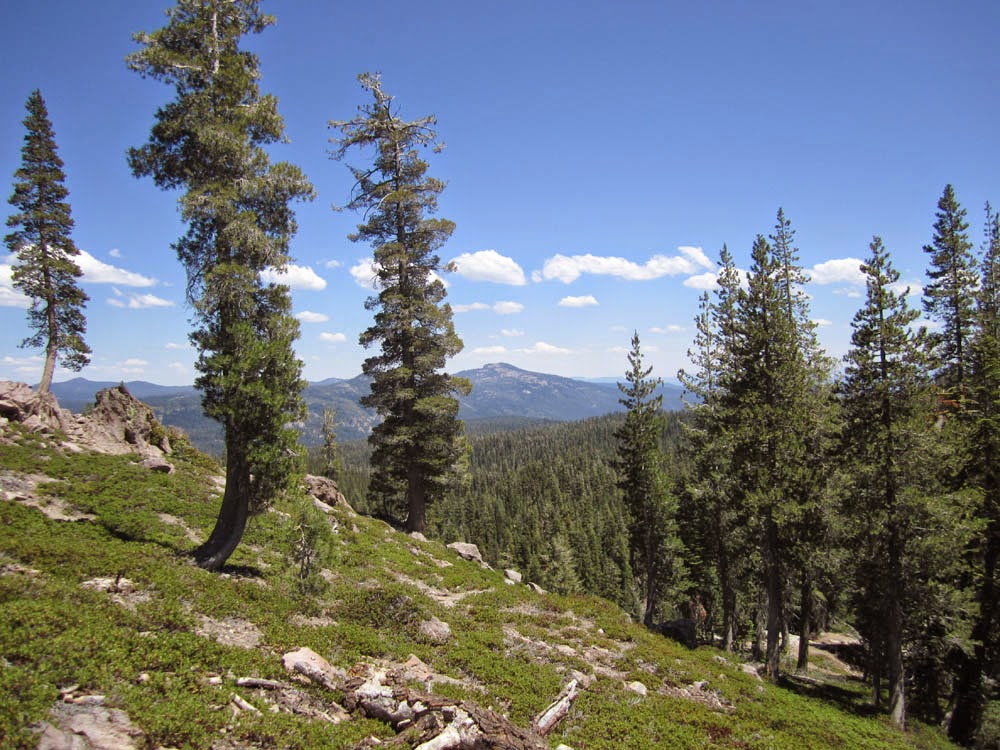 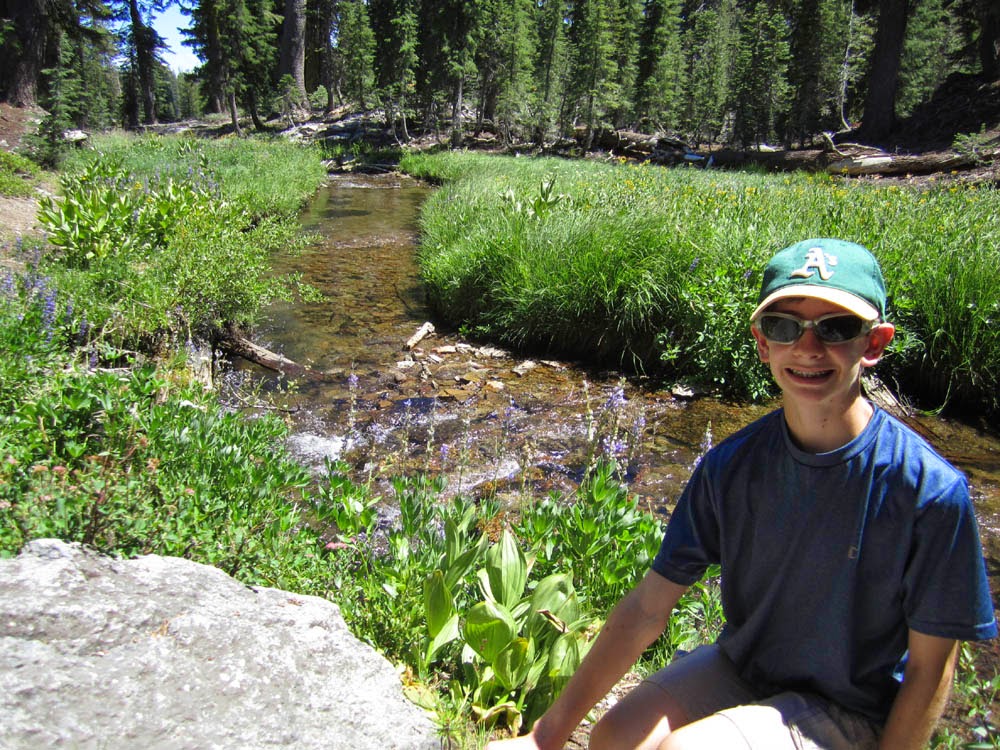 For something completely different and inarguably weird, head down to Bumpass Hell. Named after a guy named Bumpass, who had dreams of sulphur-mining glory before falling into the boiling hot streams running throughout the area and getting his leg amputated as a result, Bumpass Hell is not a typical hiking destination. We did it at the end of a busy day and we were TIRED. The elevation of the park had something to do with our energy levels. We were walking over rocky, steep terrain at around 8,000 feet, so plan for that.

Still, I'm very glad we got to Bumpass because, just look at it. It smells like rotten eggs. That's what you want at the end of your day. There's boardwalks throughout the area so you won't hurt, maim or kill yourself once you get to the smoking fumaroles, which hiss and shoosh loudly as you approach, adding to your Dante's Inferno-like experience. Plus there's boiling mud. BOILING MUD, I tell you! 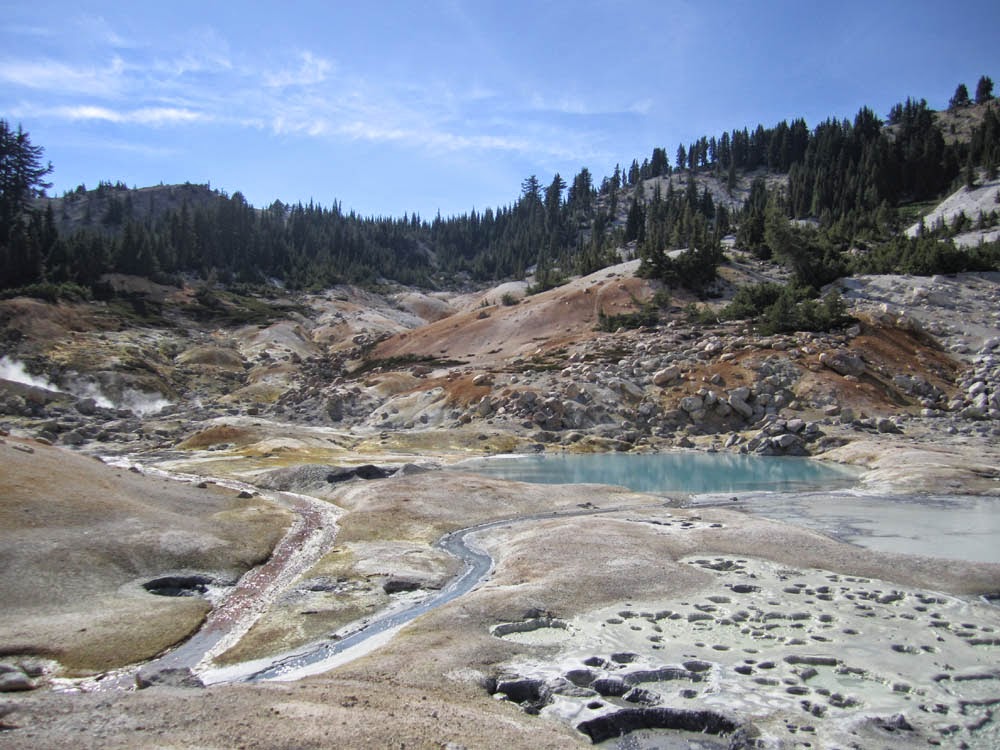 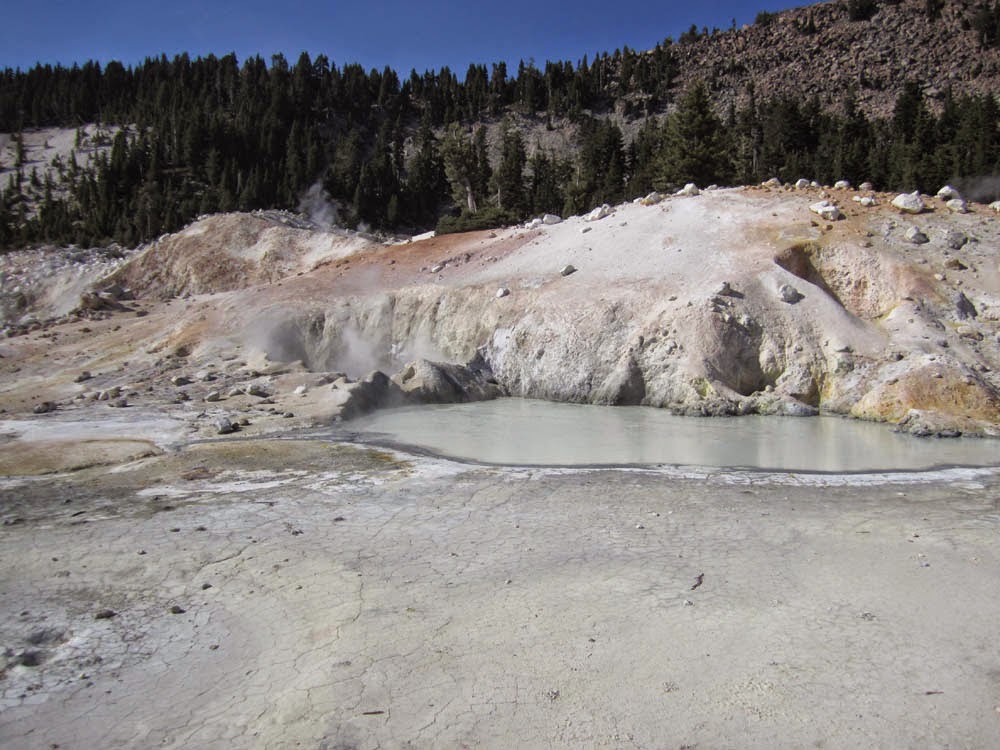 Sometimes you just can't do a hike but you want to see some boiling mud and hydrothermal activity. You can drive right up to the Sulphur Works near the south entrance to the park and walk along the sidewalk for crazy otherworldly sights. 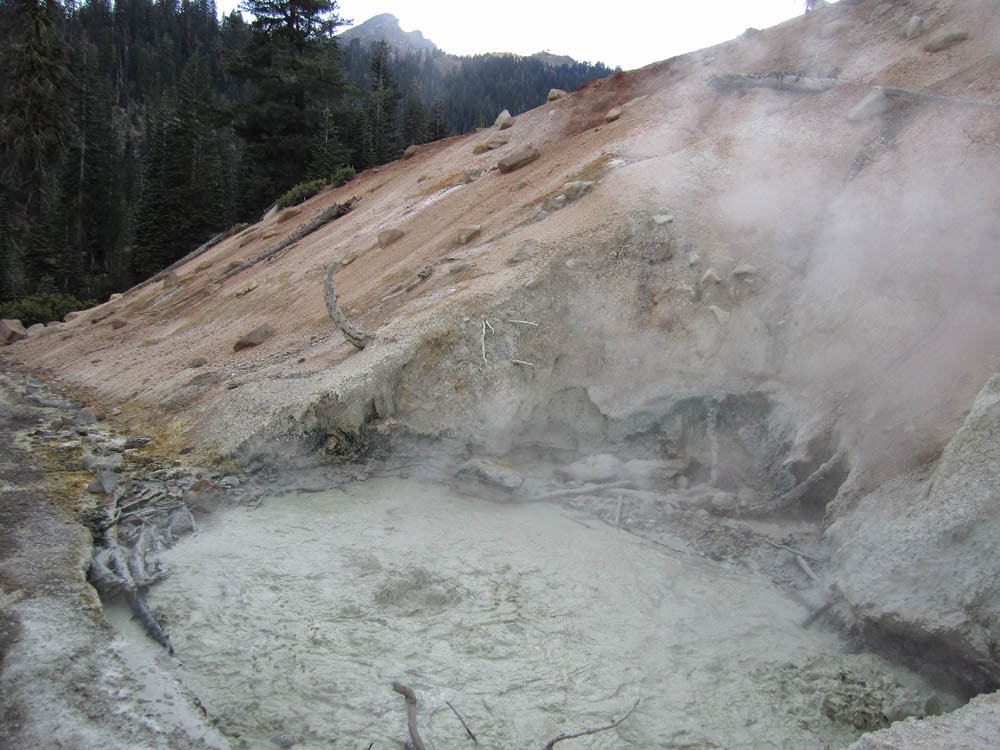 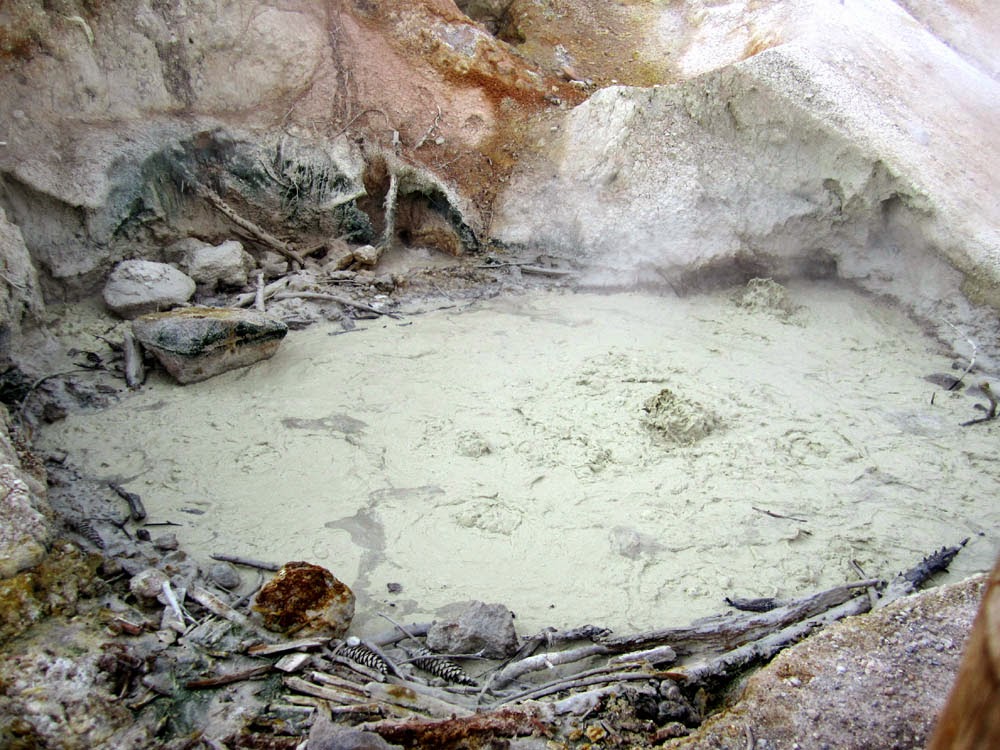 I found this interesting (besides the fact that I was staring at a large pool of rapidly boiling mud by the side of the road)—this branch in the mud had weird hieroglyphic-like markings from being boiled. At least I saw imagery in it. Do you? 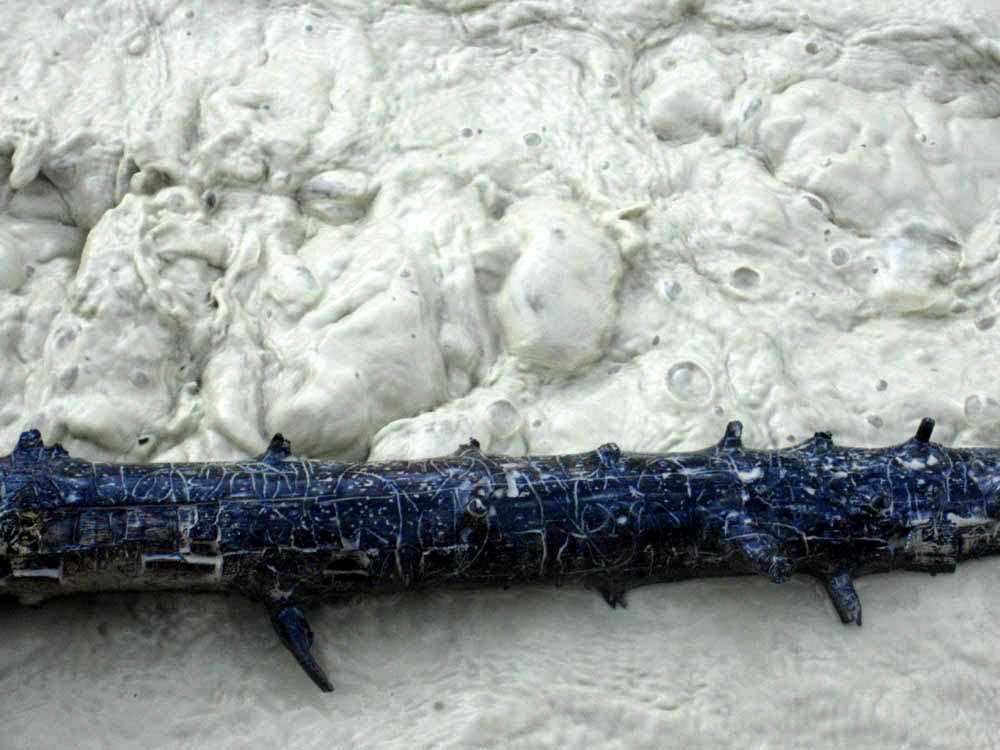 On the other side of the road is a deep valley with a stream (of course) and lots of steam coming up through the ground. It was too late in the day for a decent photo, but perhaps this will give you an idea.


Be sure to stay at the Mill Creek Resort, little cabins in the woods, south of the park. No TV, wifi, or traffic. That's pretty nice.

If you miss the resort's dinner hour (kitchen closes at 6:30), the nearby Mineral Lodge has one cafe to meet your needs.


Come the dawn, there might be a deer or two on the porch, or perhaps a wood chipmunk in your kitchen trash can. "We get that a lot around here," laughed the owner when I told him about that visitor. Also, he called them "critters," which I liked.

Be sure to have breakfast out on the Mill Creek Resort deck, so you can watch dozens of hummingbirds battle one another for multiple-feeder territorial rights. Hummingbirds are fierce. The pancakes and French Toast are really good too. The Harley Davidson riders having a hearty breakfast at the next table were good. Everything was good. 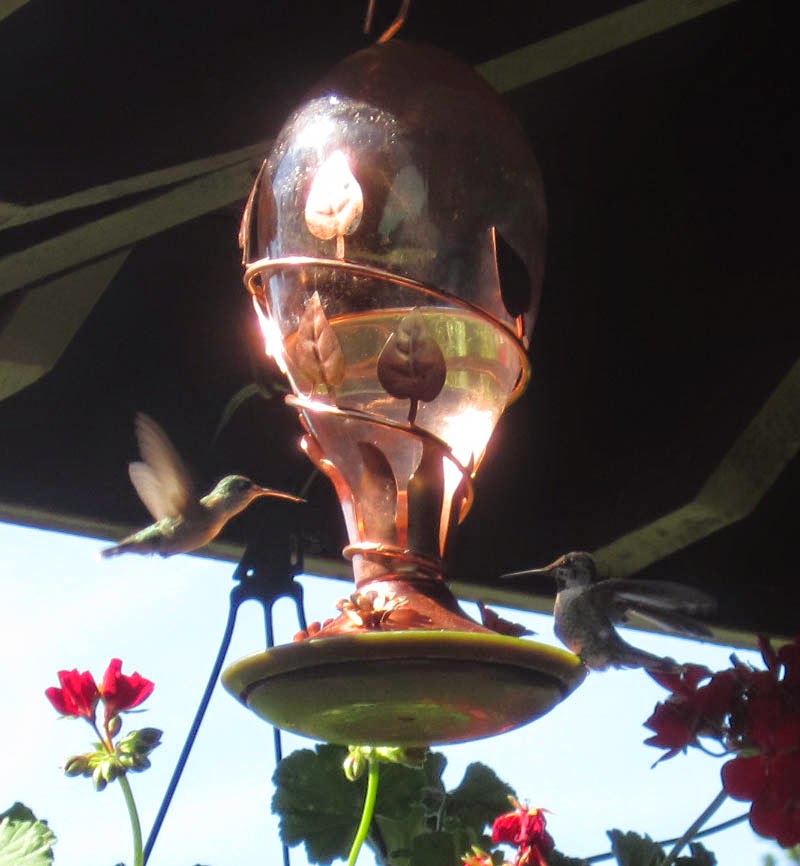 Do you like skulls? How about art? Do you like skulls as represented by artists from multiple disciplines across time and space? Then, make your way to delightful Walnut Creek, California where the Bedford Gallery is curating the skull show to end all skull shows. What could be more universally relevant than a skull? We've all got one, that's for sure. Celebrate your skull from June 12th to August 31st. Contemplate the artful possibilities of the cranium, while reflecting on our impending mortal plane. It's refreshing, morbid and terrifying all at once.

A sampling of skulls, most of which are for sale, but not at bargain-rate prices. Skulls are precious and don't come cheap, ya know. Here's a few skulls that caught my eye. The exhibit itself is really extensive (90 artists) and afterwards you'll feel like you just toured a freaky psychedelic mausoleum. You'll contemplate some deep issues, is my guess, and then you'll laugh it off and get yourself a chocolate milkshake or something to celebrate life. But the show will linger in your consciousness, won't it. Yes, it will.

Here's a detail from Enrique Chagoya's My Tattoos (2012). What I found interesting about this was that I have this particular tattoo myself, or at least a similar one. Chagoya added the skull in the dragon's mouth and played with the original image, which I found many years ago in A Coloring Book of Incas, Aztecs & Mayas and Other Precolumbian Peoples, published by Bellerophon Books in 1988. 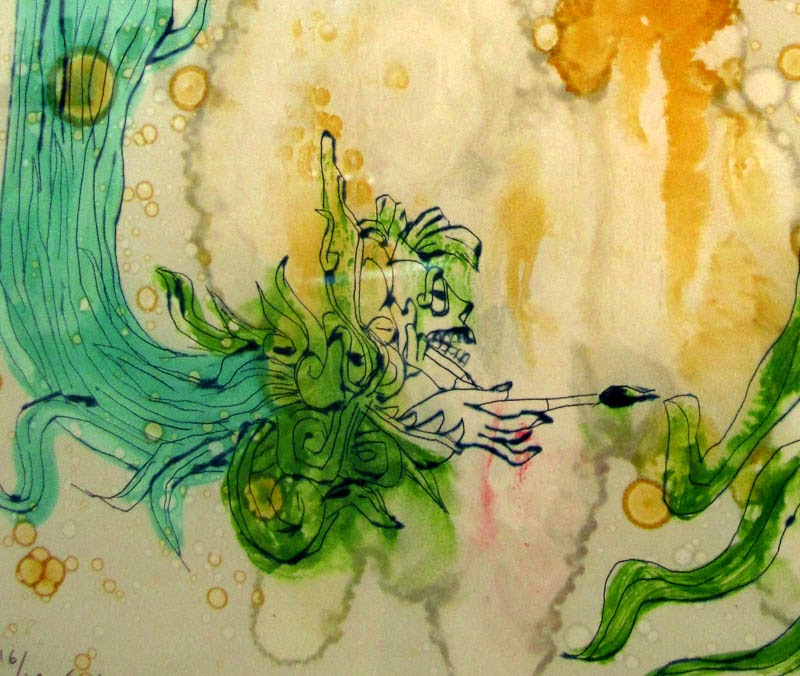 Here's my tattoo, from the early 90s, when all us girls were starting to get them. I got mine at Lyle Tuttle's shop in San Francisco. The artist, whose name escapes me, had plenty of Precolumbian artwork going up his arm, including a very fine Olmec head. This convinced me to hire him. The image is a mystery to me because out of all the illustrations in my coloring book, it's the only one that's unlabeled. It's also tiny-sized, printed in the corner of a page of Mayan ball players, as if an after-thought. Where did it come from? Does anyone out there know? Enrique Chagoya and I want answers. 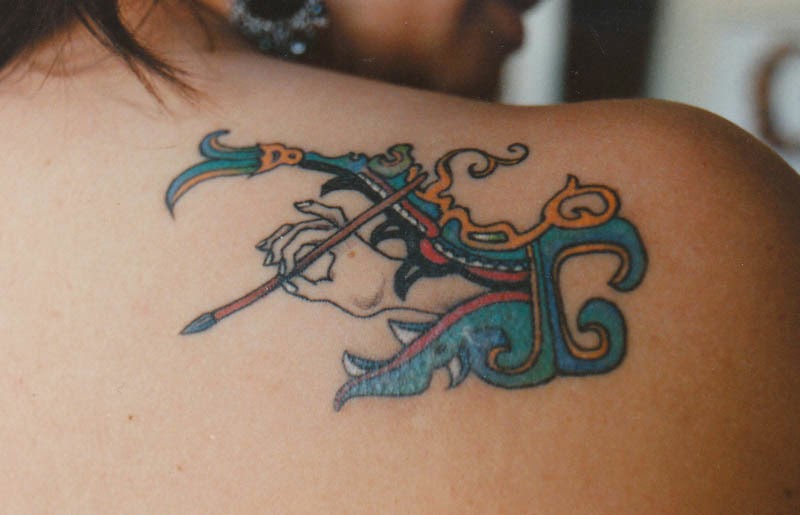 Chagoya's My Tattoos monotype in full: 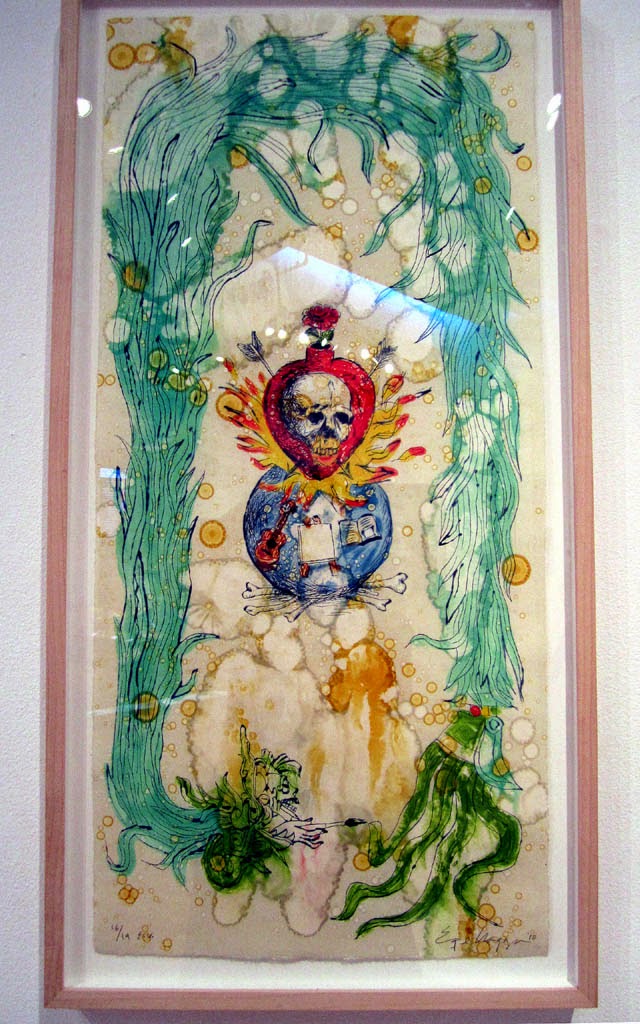 A final skull in this post.  Joshua Harker's Crania Geodesica skull installation with light-projection mapping. It really belongs in the dark at a dance party with techno music. But I put some She Mob music over it, because the song is live, it's called Party, and I think it's appropriate. Maybe this will get its proper environment during the Bedford's Arts & Craft Beer event on July 31st, 6 - 8 pm. 'Til then...

Email ThisBlogThis!Share to TwitterShare to FacebookShare to Pinterest
Labels: art for what ails ya, Walnut Creek, What the
Newer Posts Older Posts Home
Subscribe to: Posts (Atom)