In 2014, a major milestone in music and art history was reached when a music student named Amelia Hamrick attending Oklahoma Christian University took precious time out of her study schedule to transcribe the musical notation written across the butt of one of Hieronymus Bosch's hell-dwellers in his Medieval triptych and master work, "The Garden of Earthly Delights." Hamrick plinked out the tune on piano—written in a book in the painting and finishing across the posterior of the sinner in question in a section of the painting that historians call "The Musicians' Hell"—and posted to her Tumblr, for all the world to celebrate.

Here's a section of the painting known as Musicians' Hell that Bosch enjoyed putting together (do you see the bunny?) 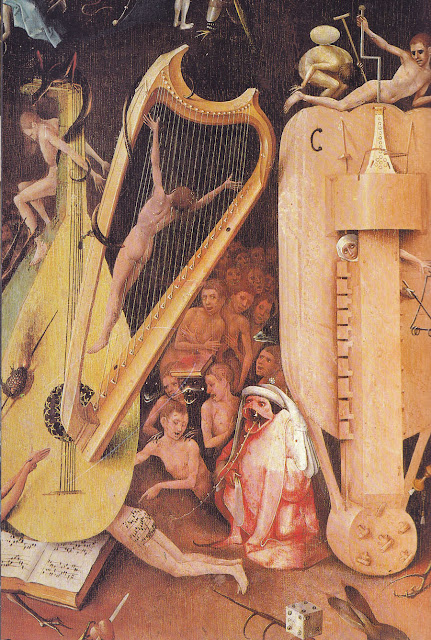 This guy's having an okay time in Club Hell with his jazz hands. 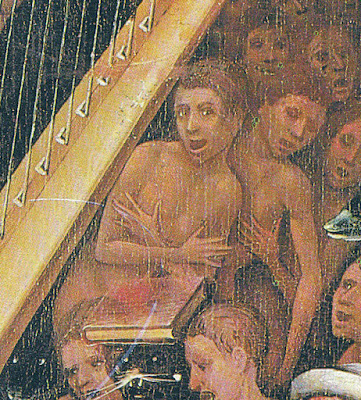 But not so much this guy, his butt exposed, a demon writing notation with its weirdly dotted tongue across this sufferer's cheeks. 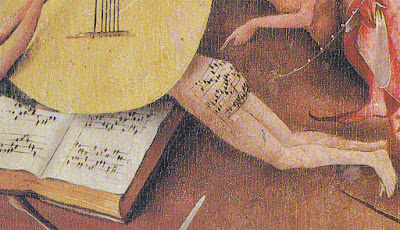 Now we can all listen to this 500-year-old butt song from hell, as featured on Anderson Cooper 360. Enjoy!

Hamrick's review is that it's a "really bad" Gregorian chant. But that didn't dissuade Will Ascenzo from posting his chant version on his Tumblr.


But hold the phone! We're not done yet because Jim Spalink has posted his version of "Hieronymus Bosch Butt Music" on lute, harp, and hurdy-gurdy. Let's listen:

These butt-music composers are legion, but not to be outdone, guitarist Buckethead has recorded and animated his take on Bosch, "Spokes for the Wheel of Torment." If ever there was a band in hell, this is it.

Email ThisBlogThis!Share to TwitterShare to FacebookShare to Pinterest
Labels: art for what ails ya, mind-f, our weird world, the music is the message, What the

Heavy Metal Moments - Congratulations to Danica Roem on Your Win

Congratulations to Danica Roem, journalist and first openly transgender candidate to be elected as a state official in Virginia, U.S. of A. She beat Robert Marshall, a 26-year incumbent who once referred to himself as the "Homophobe in Chief" and who introduced a bathroom bill that would have forced people to use the bathroom based on the gender listed on their birth certificate. What poetic justice! And she sings in the heavy metal band Cab Ride Home. An epic win.

Danica's acceptance speech, November 7, 2017: "I believe in building up our infrastructure instead of tearing down each other ... discrimination is a disqualifier ... No matter what you look like, where you come from, how you worship, who you love, how you identify, and yeah, how you rock, that if you have good public policy ideas, if you're well-qualified for office, bring those ideas to the table because this is your America too ... We are stronger together."

You rock, Danica.
Posted by Miss Lisa at 8:55 AM No comments: