After a white-supremacy rally at Crissy Field was called off for August 26th, San Francisco went ahead and held numerous counter-rallies as scheduled. This included the stylish Come Together rally of LGBTQ-rights activists in the Castro who were met up by a group of equally stylish dancing activists from the LovedUp Mobile Dance Party at Dolores Park. Together, we all electric-slid down Market Street to the Peace, Love and Understanding music party at Civic Center. 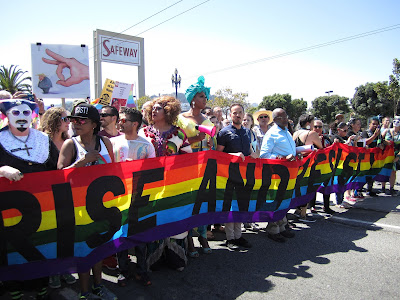 We danced and chanted and sang, thousands strong. 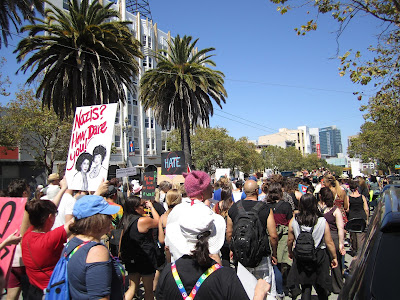 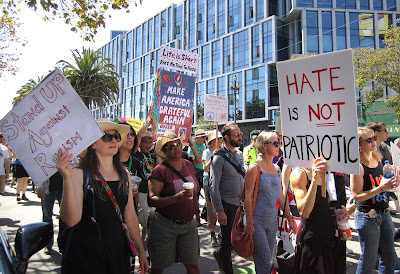 I haven't seen an official count in the media since Saturday, but it was thousands. My guess would be at least twenty thousand, if not more. I parked myself on the side of the street a few times and people just kept coming, and coming, and coming. 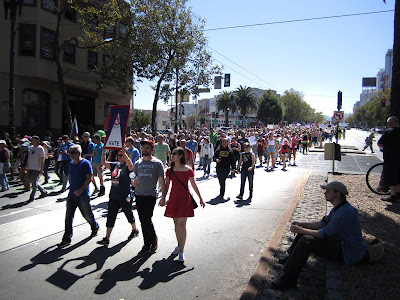 This sign won cinematic signage reference of the day. This sign has been approved by The Craft fan-favorite Fairuza Balk. An excellent job in cult-film signage. 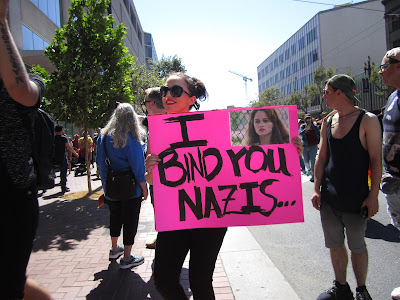 This is my kind of super-hero. 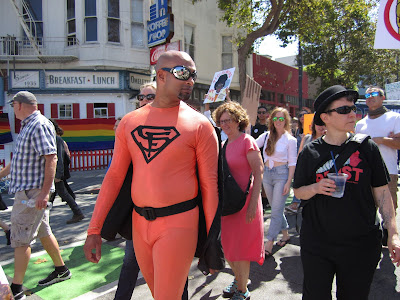 To the two ladies riding unicorns down the street while playing satirical ditties on ukuleles: I love you. 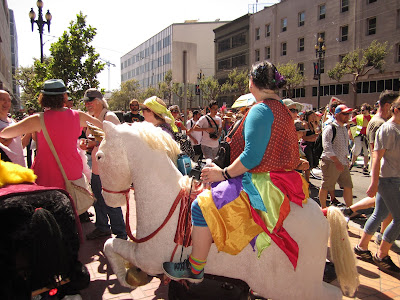 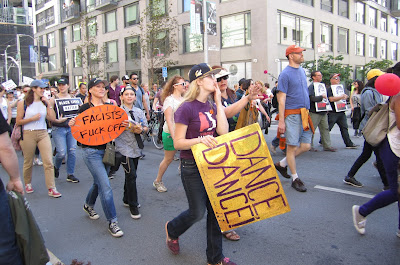 Activist Honey Mahogany commands attention with her regal radiance. I see she's co-starred in Peaches Christ's production of The Craft. This moment in photographs, brought to you by The Craft. The Sisters of Perpetual Indulgence have been stepping up for human rights and helping me cope with my Catholic upbringing in a healthy manner since 1979. Hail to you, Sisters! 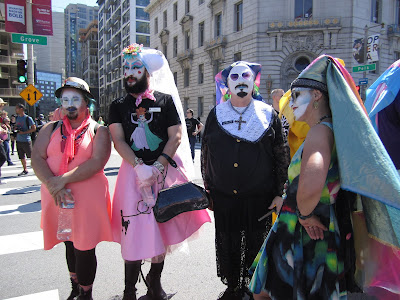 As the Sisters posed for this photo, I heard one of them say to the little girl, "I love your wig!" 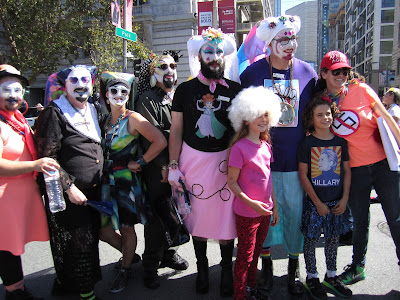 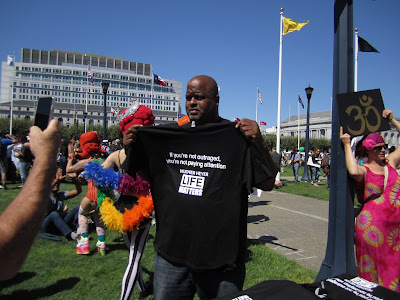 Dancers from a Dance Planet - who are these wondrous dance pixies? If anyone knows, tell me because they deserve all the accolades. 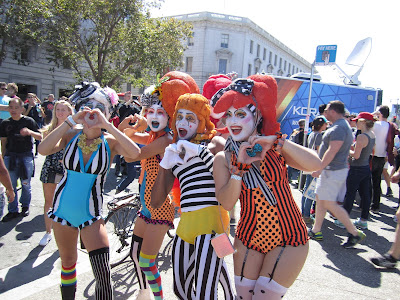 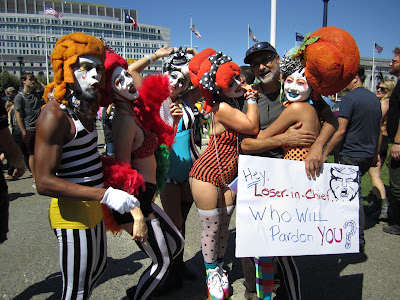 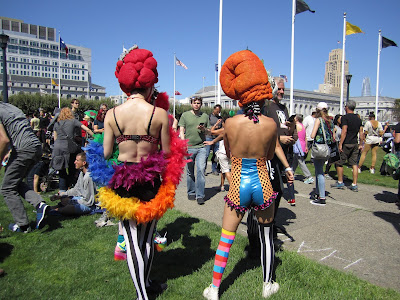 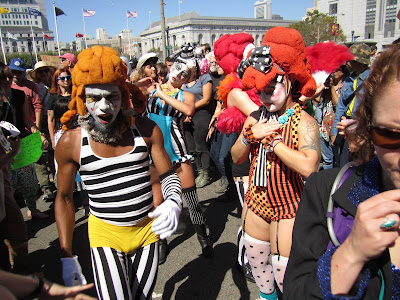 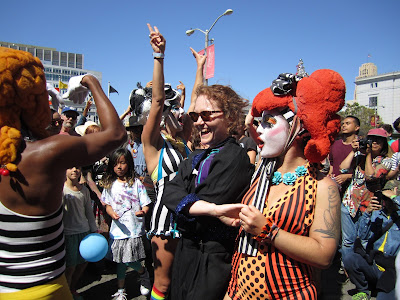 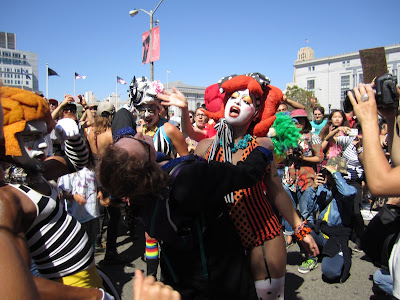 Sending love around the world.
Posted by Miss Lisa at 8:23 PM No comments:

Anti-Nazi Protesters: Say it with Sousaphones

Are you pro-humanity and for civil rights? Tired of KKK/Nazi sympathizers marching down the streets of the United States, home of the free? Get your message across the humorous, nonviolent musical way — with a sousaphone. If you don't have a sousaphone on hand, a tuba will do. Remember, practice makes perfect, so be sure not to practice too much for that raw, galumphing, nonsensical sound. The perfect soundtrack for any Nazi-rally occasion.

Need inspiration? The Internet has you covered.

This rendition by Sousaphonist Matt Buck appears to be a mix of Laurel and Hardy's "The Dance of the Cuckoos" theme with Wagner's "Ride of the Valkyries," accompanying a KKK march in Columbia, South Carolina. Buck started the trend that's sweeping the nation and the world. Kudos.

This Sousaphone player took his musical message to the 2016 Republican National Convention to satirically accompany the rants of far-right homophobic religious zealots.

British talk show The Last Leg sent their in-house tuba player (or perhaps he's a contract worker—the way of most employment in the modern age) to follow then-presidential candidate and white-supremacist Donald Trump around Scotland in his ubiquitous golf cart. Bravo.

Tuba in the shop? No worries, gather your best clown friends and head on down to the nearest white supremacist hate-speech rally and clown the hell out of it. This brings up the question of who appears the most ridiculous—the cheerful red-nosed jokesters, or the bitter guys in pointy hats espousing racial superiority.

Sadly it's beyond simple satire now that 31-year-old Heather Heyer was murdered while standing up to neo-Nazis in Charlottesville, Virginia. My deepest condolences to her family and friends. She was brave and she deserved better, as did the injured and recovering counter-protesters who fought hate in Charlottesville. Nazis and fascists: you are not wanted here. If you show up spewing vitriol based on skin color, cultural affiliation, gender, or sexual orientation, you deserve to be mocked until you turn tail and slink away. Equality and justice for all.
Posted by Miss Lisa at 2:05 PM No comments: