In the pantheon of movies that satirize the conceptual-art world, Jonathan Parker's (Untitled) stands above all the rest. This is partially because I can't think of any other films that satirize conceptual art to this extent—that is, as the goal of the film. So heavy is the satire that (Untitled)'s characters are merely players in a New York City contemporary art-based economic system, and that's how it should be, because as anyone who's worked in a gallery knows, that's how it is.

Glowering Adam Goldberg is experimental-music composer Adrian Jacobs, who lives by his hardcore artistic principles, no matter how economically unfeasible. When not performing his laughably unmusical works to minuscule audiences (which include his parents, who walk out of the first prelude because "his father needed to use the restroom,") he's barely putting up with his equally pretentious but more insecure brother, Josh (Eion Bailey), who paints banal abstract works that are all the rage on the commercial-art circuit. Everything sound-related is tortuous to Adrian, including his paid work as a lounge pianist, accompanied by a  babble of cell-phone abuse by upscale bar patrons who are oblivious to their mass technological cacophony—a sort of unknowing sound piece they create during his work hours.

I can't give much more away here without spoiling the delightful visual humor of the film. Parker has a good sense of when to use a close-up as a substitute for studying a work of art, before pulling back to reveal how art is a commodity (or not). These shots are punctuated with meanings that may be somewhat lost on anyone who hasn't sat through a performance of John Cage classics, but if you're an artist, gallery patron, innovative musician, or aficionado of any of these mediums, this is for you. And recommend it to your frustrated-artist friends and family members too. They'll thank you.


Into Adrian's world steps (or squeaks—cartoonish sounds emit from her synthetic-fabric wardrobe) Madeleine Gray (Marley Shelton), who seems to have poured her entire trust fund into a small storefront gallery full of nightmarish contemporary art. Madeleine's eyes light up behind her designer eyeglass frames every time an artist outlines an analytical treatise of why he creates aesthetic horrors. We're unclear if she truly believes in these works, or simply wants to profit from them. Probably a bit of both.


Madeleine takes a shine to Adrian's work (and Adrian) and convinces novice tech-billionaire art collector Monroe (Ptolemy Slocum) to commission a new sound piece. Monroe's apartment is a bravura art-collector joke throughout his awkward dinner date with Adrian's clarinetist (Lucy Punch) who moves throughout gallery spaces with honest expressions of confusion. Although she's the earthiest cast member and a close cohort of Adrian, she doesn't get a name, known only as "The Clarinet." There's not a lot of breathing room here for earthiness.


Adrian's hapless ensemble attempts to rehearse  his dense directives, which include chain thrashing, bucket kicking and impromptu complaining from a Russian singer (Svetlana Efremova) who's clearly not enamored with his convoluted vision.

And there's always a new artist coming down the pipeline, spouting an idea that has yet to be commodified. Madeleine is there to nurture and wholesale whatever action plan should present itself, with a back room full of unheralded commercial art to bankroll the deal. Tensions ensue between brothers, artists, patrons and curators. There will be consequences.

Into this world we enter—its rules and regulations seemingly from the brink of insanity yet deadly serious business for all. The best comedy comes from deadly seriousness. Adrian's boundless despair stems from knowing he'll never be recognized for his work during his lifetime. A quibble—this art-dipped and dunked group of patrons and dealers would be familiar with John Cage's 4'33" and therefore there's one instance of a joke falling flat during a climactic performance. Otherwise, the satire is deadly and the gallery world obtuse, grasping, or simply a con. But the desire to create something new and meaningful is honored without condescension—an impressive juggling act.
Posted by Miss Lisa at 4:09 PM No comments:

Email ThisBlogThis!Share to TwitterShare to FacebookShare to Pinterest
Labels: art for what ails ya, movie reviews you can use, the mooovies

What if "they" made a remake of the 1953 grade-Z sci-fi contender for worst-movie-ever-made Robot Monster and it starred Donald Trump as Robot Monster? Well, guess what, "they" have and we're all co-stars in this mad endeavor. It's like a reality show, starring us! With Donald Trump as Ro-Man, the monster with his intergalactic bubble-machine death ray.

Don't remember Robot Monster? Let me jog your memory. The IMDB tagline reads: "The monstrous Ro-Man attempts to annihilate the last family alive on Earth, but finds himself falling for their beautiful daughter." Full movie is here (do you dare?).

Here's some shots of Trump in the role he was born to play: monster from outer space. This role was first inhabited by George Barrows who got the role when budget-minded director Phil Tucker found out he owned his own gorilla suit. Tucker slapped a diving helmet on that sucker, and behold! An icon to inanity was born.

See Robot Monster daily on most news networks and across all Internet platforms—unfolding before our very eyes whether we want it to or not. Trump Monster dialogue included. 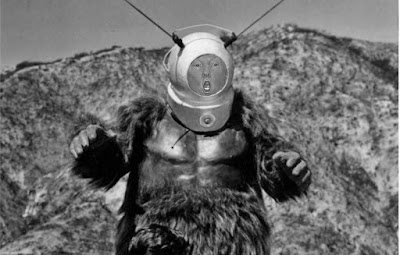 "The point is, you can never be too greedy." 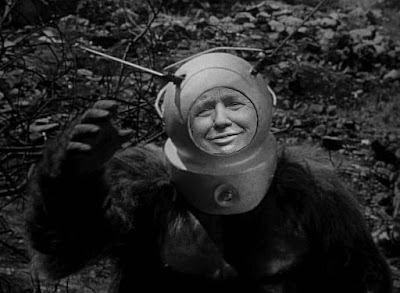 “My fingers are long and beautiful, as, it has been well documented, are various other parts of my body.” 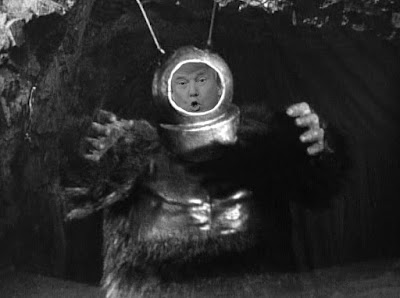 “I could stand in the middle of 5th Avenue and shoot somebody and I wouldn't lose voters.” 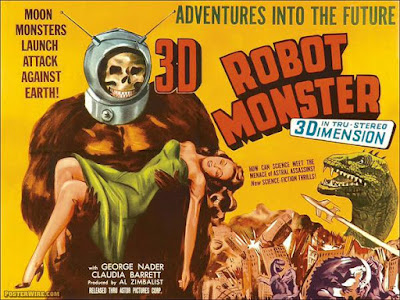