I'll explain: thanks to the "campus carry" gun policy backed and enforced by Texas governor Greg Abbott, it's legal to bring a licensed gun onto any Texas campus and right into the classroom. Yet the University of Texas at Austin's student handbook bans the "distributing" and "brandishing" sex toys.

Anyway, the .Mic news site made a great little video about the photo-op-rich rally and I commented to the UT activists a positive little message of support, because you can imagine the backlash they're getting from gun-toters who find sex toys "obscene." I got some brush-back for my effort. And I'm amused. So I saved it here, because let's face it, campus carry laws are not the best policy, and also Facebook is so rarely amusing.

See for yourself. My original comment, "Hilarious and insightful. Keep up the good work," is at the top, followed by the following exchange: 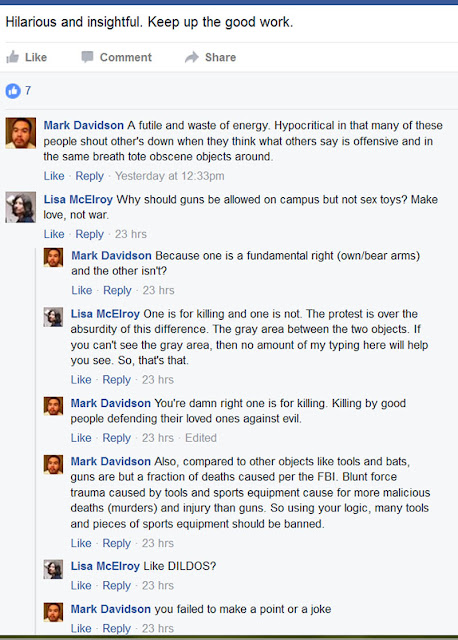 Mark Davidson thinks that if he writes "you failed to make a point or a joke," it is so, when the reality is very different. His deep denial aside, he set the pointed joke up with his own argument and it is PERFECTION.

Here's a screen shot of some of the video points from the .Mic video. The original is here.

Now these activists have made their point and it's funny and true. Keep up the good work, ladies.
Posted by Miss Lisa at 9:46 PM No comments:

Email ThisBlogThis!Share to TwitterShare to FacebookShare to Pinterest
Labels: blog-arrific, comedy jokes, our weird world, political muddle, What the

The 70s! A special time for rockin'. If you don't believe me, you haven't seen "The Midnight Special." The pilot aired on August 19, 1972, which I missed because I was eight years old and my bedtime was at eight as well. But in subsequent years, I managed to stay up late, nabbing television-watching real estate in one of our suburban-home watching stations after the parents had gone to bed.

Here was a world of live music, onstage, decked in man-made finery the likes the world had never witnessed before. I'm talking about shiny plastic-like fabrics combined with crocheted granny-squares (with acrylic yarn, of course), as if pioneers on the Oregon Trail had ingested some seriously psychedelic mushrooms en route to the promised land. People dressed like pioneers in the 70s, complete with sun bonnets and hand-woven fabrics made from petroleum-derived chemicals. It was a serious mish-mash.

And it shows. Just look at these images I borrowed from "The Midnight Special" DVD documentary-extra, "Star-Studded Stage Fashion." I appreciate that my local library carries several of these DVDs, particularly disc 1, featuring Argent, Linda Ronstadt, Joan Baez and Hall & Oates (don't give me that look—they all rule in their own way, okay?). It is 70s-studded to the extreme. I'm going to title everything I do "________-Studded" from now on.

As a child, I was open and accepting of all stage fashion. I didn't have a frame-of-reference for such things, so this all seemed completely normal to me. You play in a band or sing? Oh, then you wear these kinds of clothes during performance. No judgment. That was the best way to be during the 70s and accounts for my survival. It's a theory anyway.

We begin with Helen Reddy, singing "I Am Woman" in a pink crocheted halter top. There are interviews with many of the former performers of "Midnight Special" and they're good sports to look back at their younger selves and comment. Reddy seems somewhat baffled about her fashion choices, which she implies were "one of several options" to choose from (paraphrasing). So I imagine there was some wardrobe person on hand with a trunk full of garments and the performers reached in there and perhaps stoned, drunk or sleep-deprived, this was the result...?


Hot Chocolate! I love these guys. I just heard "Every 1's a Winner" yesterday while shopping at Grocery Outlet Bargain Market, and indeed I felt like a winner while finding good deals on granola bars.


Kool & the Gang! Yes, this is stylish. I miss the masterful R&B horn sections of yore. Playing tightly composed dance tunes while wearing a three-piece suit is not for the faint of heart. It gets hot under those stage lights. Kudos, Kool & the Gang. 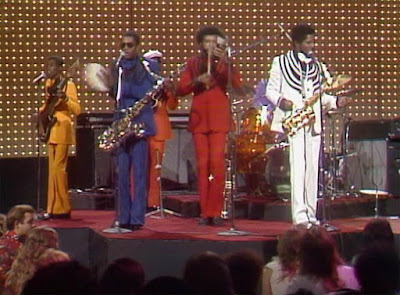 Check out Aerosmith's pants. That's gotta affect your ability to stay on pitch.


I can't believe Lindsey Buckingham could play with these ginormous sleeves flapping about, but he is a guitar master


Just who the hell is this anyway? Disc 1 doesn't credit everyone in this documentary, assuming you have the entire set at home at your perusal. These pants are even tighter than Aerosmith's attire. Jesus, ouch with these trousers.

The Emotions, suited up in white and silver menswear. I love a lady in menswear. I just love menswear—it's comfortable and wears well. 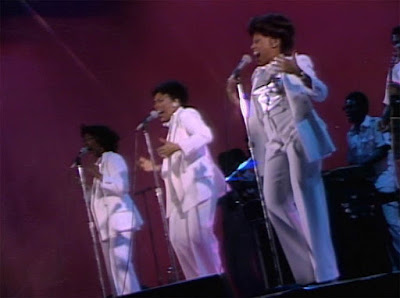 White suits were a thing. 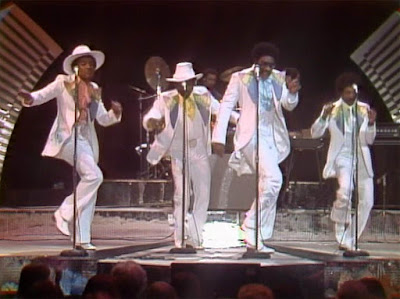 And what was once called leisurewear, although ABBA is taking it too far, as usual. 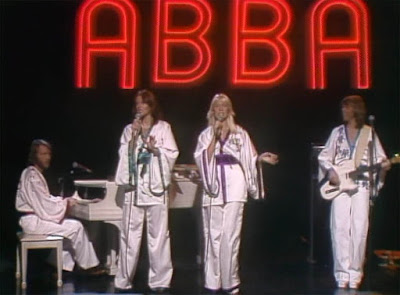 There was nothing leisurely about the late Barry White. He meant business. He was large and in charge, with the 40-piece Love Unlimited Orchestra to back him up. FORTY-PIECE ORCHESTRA—the 70s were kind of amazing. 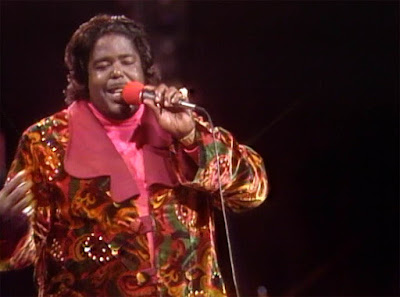 Freddy Mercury. We were so dense, we didn't understand that he was out by naming his band Queen. Jumpsuits were big and hard to deal with in public restrooms. 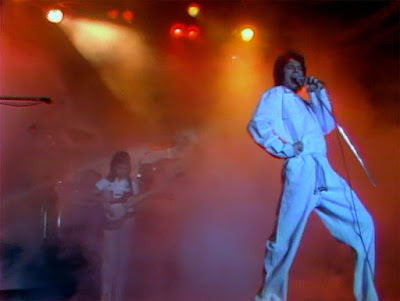 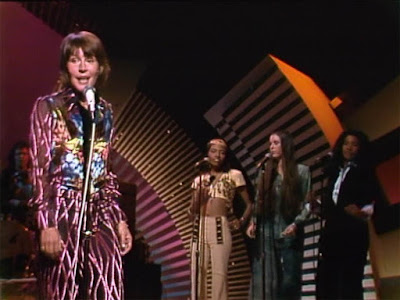 LaBelle! "Lady Marmalade" was a radio hit that taught us kids how to speak French while singing along to a song about a business man who has mind-blowing sex with a New Orleans prostitute.

The O'Jays - unified elegance. Top-40 radio of the 70s was like a blender full of musical genres—a genre smoothie if you will. It made for an interesting time for early-80s bands that were made up of kids who had grown up listening to a lot of different musical styles. 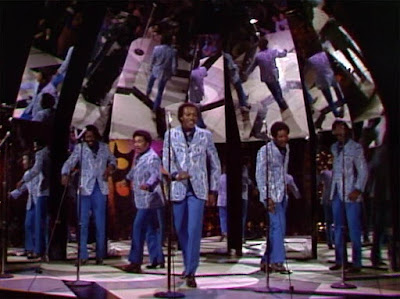 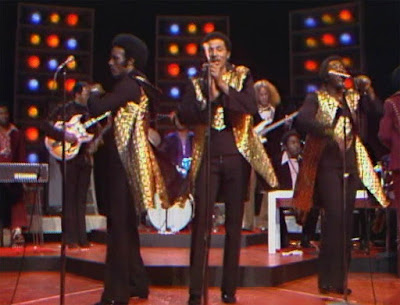 So O'Jays segueing into Peter Frampton was not weird for us. We adjusted our inner-ear tune-forks accordingly. Out of all the interviewees for this segment, Frampton appears to be the most embarrassed by his bare-chest look, excusing himself slightly by mentioning that Robert Plant pioneered the style and who was he to question it? It's okay, you're still a total cutie, Peter. 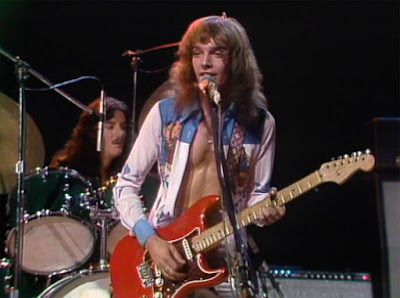 Redbone! They were the awesomest. I remember seeing this performance and thinking, these guys look like people in my family. Redbone and Santana—we were glad to see and hear them in our household. 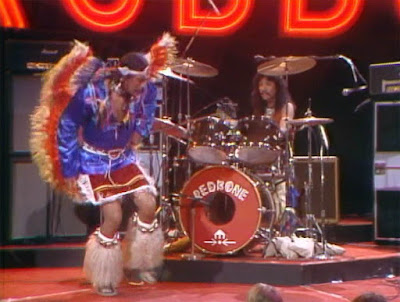 I'm including Kevin Cronin from 1980-era REO Speedwagon only because I had a blazer just like this. It was oversized and evoked a weird blend of dressy combined with circus-clown that made up much of early-80s style. 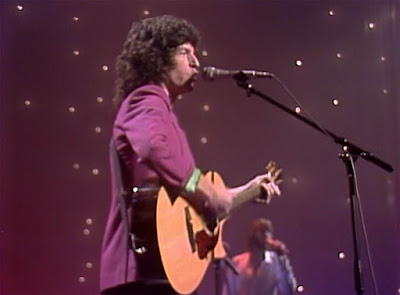 Sly and the Family Stone. They had it all. They rule the Earth. Forever and ever. Peace and love, Sly. 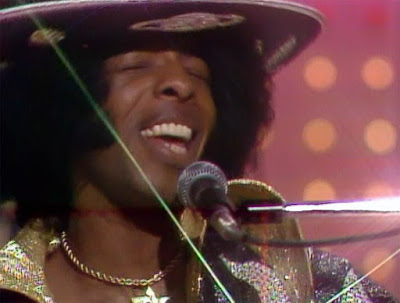 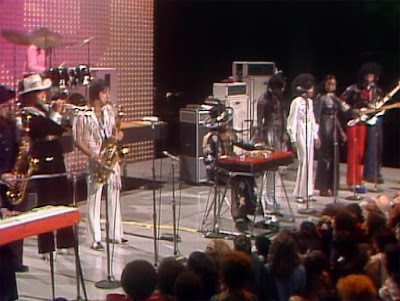 Check out Tina Turner and the Ikettes. They're still cooler than anyone else to this day. 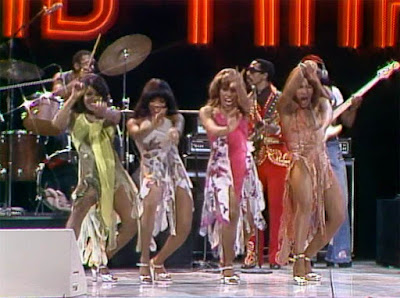 I don't know what was going on with Todd Rundgren and I'm sure he doesn't either. And that's okay. No judgment. 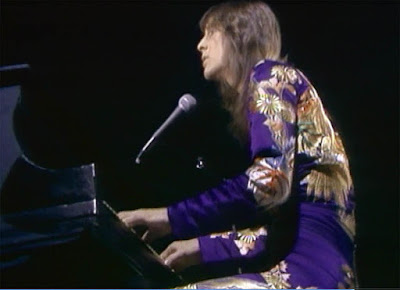 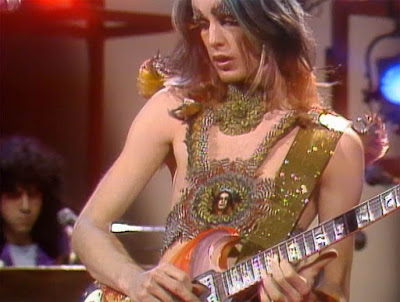 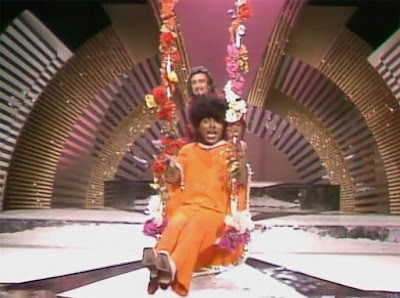