So I'm a grown woman, watching this Brady Bunch "Getting Davy Jones" episode from 1971. None of this makes sense. But hear me out: I've never seen this episode. Me, a Brady Bunch freak. I've seen every episode of this show at least three to four times. Perhaps even more. I was a child during its initial run and it's been syndicated ever since, so do the math.

Anyway, I missed this episode when it first debuted and of course it was THE TALK OF THE PLAYGROUND the next day, only I, who had loved (truly loved) Davy Jones since age eight, had no idea what anyone was talking about. Davy Jones + Brady Bunch = Mystical Convergence to my young mind. And I missed it.

Oh well, I thought, I'll just see it when they rerun it over the summer. Summertime was Brady rerun time, back in the 70s. Except I kept missing it. Over and over again. Forever. It would become a mythical episode for me—the one guest-starring my favorite Monkee (next to Mike Nesmith)—did I dream the entire scenario?

Flash forward 44 years later and I finally decided to see this damn episode. For my own piece of mind, so I could move on. Finally.

I put it in my Netflix queue and waited. Won't be long now, I thought. It's going to be me, the Bradys and Davy Jones, my childhood crush. Except Netflix wouldn't send it. A notification appeared on my account: VERY LONG WAIT for this DVD. WHAT?! I thought. VERY LONG WAIT? How about 44 years, Netflix?! How about that?!

I waited some more. Weeks, months went by. It was kind of good in a way because Netflix, feeling bad that I had such a long wait, kept sending me extra DVDs to compensate for my inconvenience. For the last several months I've had four DVDs at a time in my home, when I'm only paying for two. I figured, well, at this point, I'm making out okay, and if I never get to see this episode, at least I'm getting all these free movies out of it. We can't get everything we want. We're not all Marcia Brady, after all.

But then, one day, it arrived. And at long last, here it is. The Davy Jones episode. I live-blogged it, but I'm going to embellish, not because it's a great episode (it's pretty tossed off, I'd say), but because this is my CHILDHOOD I'm talking about here, as experienced through the warped prism of inexpensive television production values, child-actor labor, and a pop star who had experienced enough career weirdness in three years to last a lifetime. RIP, Davy Jones, consummate showman.

Marcia and her Fillmore Junior High entertainment committee (seems like a lot of responsibility for junior-high girls) need to get a guest star for their prom (that is not believable but I'll just go with it). 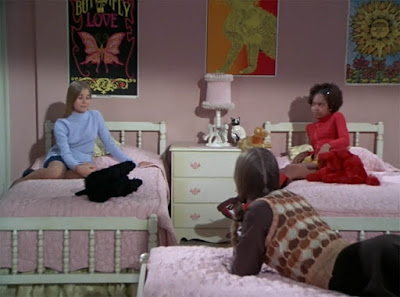 Jan interrupts to say Davy Jones is here! He's here! He's here! My reaction would have been: WHAT?! ?!?! But Marcia is nonplussed, saying, Jan, don't interrupt, we're having a very important meeting. THAT'S NOT VERY RESPECTFUL, MARCIA. Then she absorbs what's happening and reacts properly, shouting DAVY JONES!? He's HERE, in THE HOUSE? Even for entitled Princess Marcia, that seems like asking too much. And it is. Jan, voice of reason, says, no, he's in a hotel. 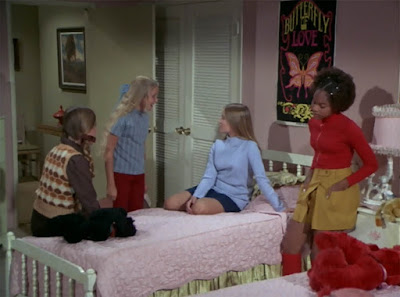 Marcia pulls a framed handwritten note from Davy out from under her pillow. That's not weird at all. She hands it over to her way-cooler cohort, Doreen, to prove that he promised her a favor if he's ever in town since she was president of his fan club. Doreen is like, "Yeah, right. It's just a publicity letter, Marcia." Also, Doreen has a great manicure, so I'm apt to side with her on this one. 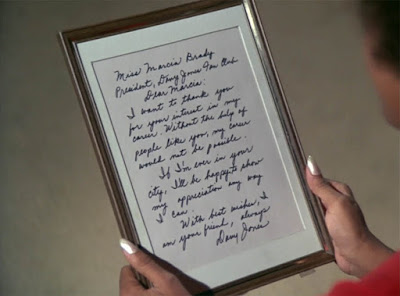 Peter and Bobby are not impressed by Davy Jones. Jan and Cindy say they're jealous of Davy Jones and his 2,000 fan clubs. How many fan clubs does Peter Have? Peter says he hasn't counted them in a while and Jan says it shouldn't take him much time to count to zero. Good one, Jan.

Bobby pretends he's Davy Jones by being a complete spaz, yelling, "All he does is bang on a guitar, singing Ooh, baby! Yeah Yeah! Oooh!" Peter says, "Don't break your gee-tar." Which doesn't make any sense. Everyone knows the proper way to make fun of Davy Jones is to bang upon a giant tambourine with aplomb while crooning, THE SHAVING RAZOR'S COLD AND IT STINGS! ... CHEER UP SLEEPY JEAN! 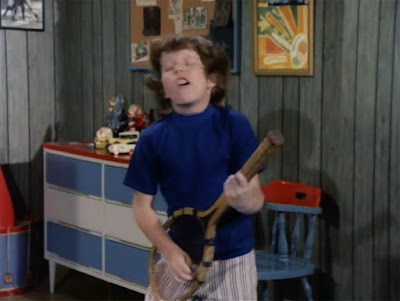 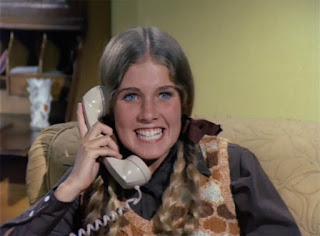 In all the excitement, several Fillmore Junior High girls are inexplicably styled as if they were auditioning for a theater production of "Heidi." 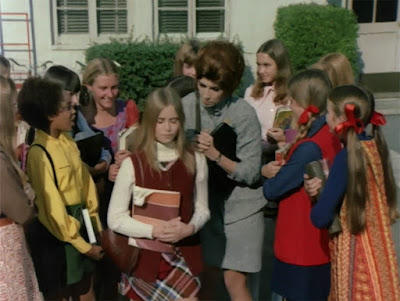 There's already a banner announcing Davy Jones at school, as if everyone was under a mass delusion at this point. The Brady Bunch was sort of a mass delusion of a show, with heartwarming epiphanies. OH MY GOD, MARCIA WALLACE!!!?!?! I didn't know Marcia Wallace was in this episode. She's Marcia's delusional teacher Miss Robbins here, but you may remember her from another classic episode, "Jan Buys an Ugly Wig," in which she shone as "Saleswoman." I'm so glad they hired her for this episode. I love her almost as much as Davy Jones. Nothing in this episode seems normal because they managed to get Davy Jones in a stunt-casting coup. It's like the Partridge Family episode where Bobby Sherman was hiding out in their garage. I don't remember why he was lurking on their property, but Laurie Partridge was pretty thrilled. The Bradys have the opposite problem—they'd like to lurk in Davy Jones' vicinity but the universe conspires against them.

Here's Greg, trying too hard to compete with the idea of Davy Jones by wearing this overly groovy purple shirt. Everybody's flipping out a little in this episode. I would be too. 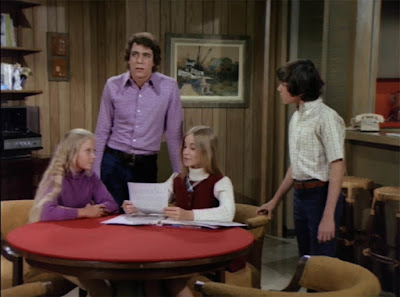 Marcia tries writing a telegram to Jones' hotel to NO AVAIL. Mike imparts his parental wisdom: don't promise something you can't deliver. Like Davy Jones at your prom. Of course, this is Marcia, so she'll get her way. She always gets her way.

The prom is a week away. FUCK.

Mike tries to get a golf networking connection going. No dice. I like Marcia's pullover sweater--very flattering. But WHAT is Carol Brady wearing here? Good God.


Marcia has a cow over the upcoming loss of all her school-chums after this debacle.

Peter tries calling the hotel under the guise of being an old music buddy of Davy Jones. Jan, Bobby and Cindy pretend to be in his band, singing four different public-domain songs at once, and off-key as well. The hotel operator sees right through that ruse and hangs up on them. That was dumb, kids.

Sam, Alice's boyfriend, who is working class, knows the guy who sells the meat to Davy Jones' hotel. Greg and Marcia dress up as busboys and Marcia uses a deep voice because in the Brady universe, no girl could ever bus anything, ever. And also, maybe they think busboys don't stalk pop stars. But I bet they do. Some of them, anyway.


Davy Jones' manager looks like a perv in a Beatles wig in this sad facsimile of a luxury hotel. 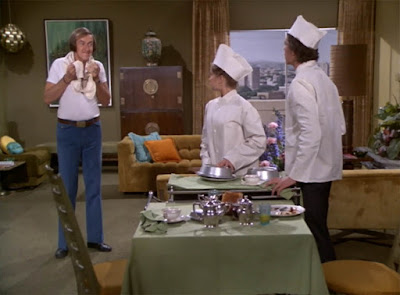 Finally—Davy Jones! He's singing "Girl." It's a promotional tie-in for his first post-Monkees solo album. Those are some big headphones. He's so sincere. This isn't my favorite song. Even when I was a kid it kind of embarrassed me. I've never been into love ballads. He's bobbing like the born showman that he is. I wonder if he missed The Monkees at this point. Probably not. That show was fun to watch but probably a huge cluster-fuck for all involved. Oh now his voice fades out while he's still singing. I hate when shows do that. That's not how it works. You sing multiple choruses and the fade-out is engineered later. The Partridge Family always faded out while they played "live" on stage. That was insulting to our intelligence. 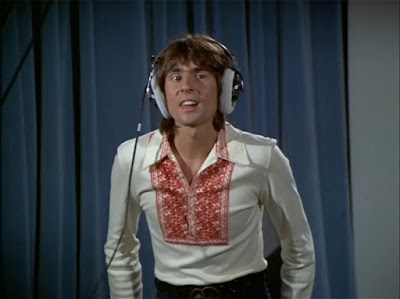 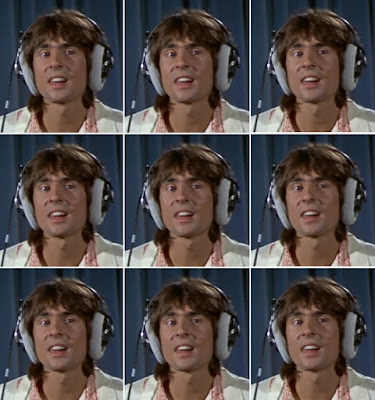 Anyway, Marcia barges into the studio wearing a mustard-colored acrylic turtle-neck poncho. She's making her case to the perv manager who wants nothing to do with her, tossing her out on her can with an air of genuine disgust. Davy's listening to their exchange in the studio, thinking: that girl's got chutzpah. And she's the president of my fan club... Hmmmm... 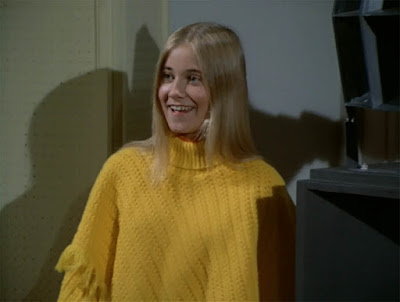 Marcia throws in the towel. But DING-DONG—someone's at the door. Who could it be? 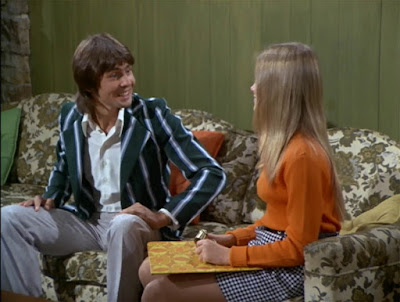 Davy Jones is shorter than Florence Henderson. That's so cute. They have similar haircuts too. Ew, Davy Jones is asking Marcia to be his prom date. That's not right. Well, it was the 70s. No one thought that was weird at all.

Do we get to see the prom? The Brady kids are singing "Girl" now. What a nightmare. Mike thinks so too. He yells, "SHUDDAP YOU DOPES!" (my interpretation). Wait, is that the end? 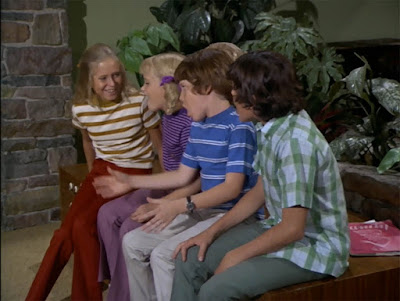 That's IT?! We don't get to see Davy Jones perform? How was the prom? Did he sing "Girl" to all the Heidi girls and Doreen and Marcia Wallace? What the hell?

We would all have to wait until 1995 for The Brady Bunch Movie to finally get our Davy Jones prom scene. Was it worth the wait? I'd say yes. No Doreen though, sadly.

And that's that. A somewhat bitter disappointment. Still, I'm glad I saw it at long last. Cross it off the bucket list. Marcia Wallace was so under-utilized in this.
Posted by Miss Lisa at 10:37 PM 4 comments:

Email ThisBlogThis!Share to TwitterShare to FacebookShare to Pinterest
Labels: Brady Bunch much?, the music is the message, time travel, TV party tonight

Here they are, just in case you need them.

Watch Trump slide away, his face squished down like a tossed-aside sock puppet, his little claw-like hands dithering across the desk for all of eternity. It is proper. It is right. Thank you Time Magazine, for releasing this video and thank you bald eagle for trying to annihilate the nasty orange rat man. 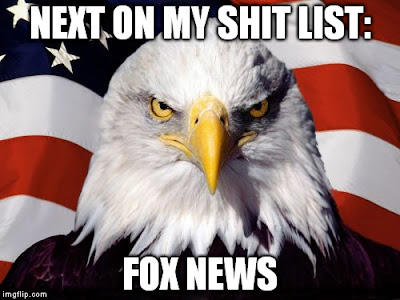 Hey, I found a copy of Swellsville in my 'zine vault (a moving box full of zines, stored in the stairwell). This old blog Teenage Gluesniffer wrote up a fine piece on Jack Thompson's labor of musical love from Seattle. I think I got slightly involved with this through my friend Richie, who's been writing about music since around the dawn of time and now, besides publishing fine rock history books, lectures and teaches in the Bay Area.

Anyhoo, who's interested in musical thoughts of the 1980s? True, the bands mostly disintegrated but our thoughts and relationships with them never fully faded away. Partially because we were all "coming-of-age" and this was our youthful soundtrack and blah blah blah and so on and so forth, but most importantly because this was truly an underground scene for us and we didn't know that was not going to last. So it's like a dream from the subconscious that if you don't write it down, you'll forget about it in the morning. We were all compulsive writers.

"Punk No Dead" was my thoughts from a three-month stay in Mexico where I was based in Guadalajara, attending school to learn Spanish (which I still need to learn, thanks to my mom's family buying into 1950s' assimilation ideals that encouraged them not to speak the language around their kids, and also I'm a lazy language-learner), but traveled throughout the southern regions of the country as well. My friend Rosanna and I were underground-music chicas who had to forgo underground music for the most part during our stay in Mexico. Until that faithful night in San Cristóbal de las Casas...

And I included a coloring page, which Thompson was so nice to print full-page for this 1989/90 issue. Thanks, Jack. I hope you're still writing. 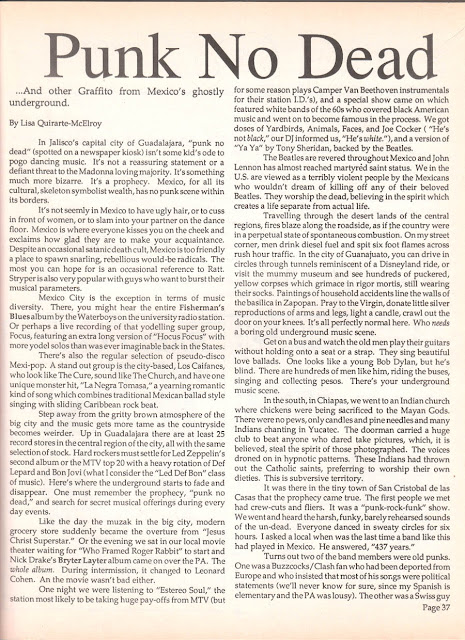 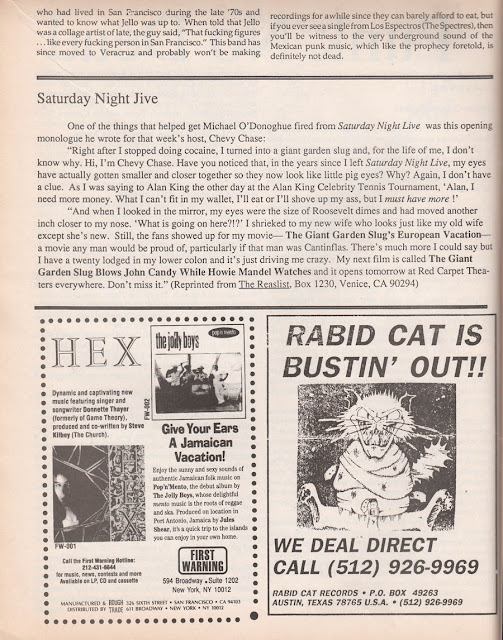 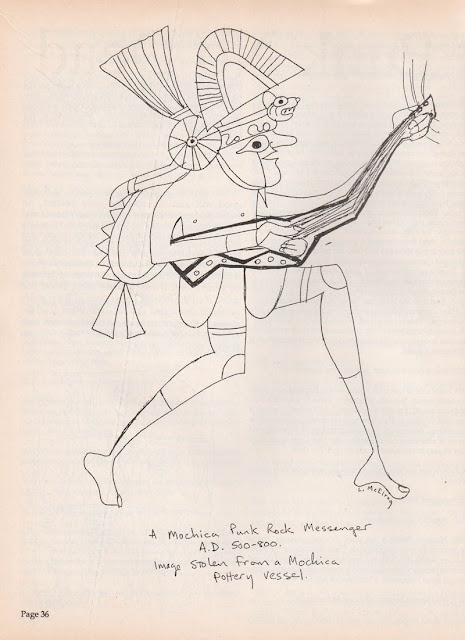 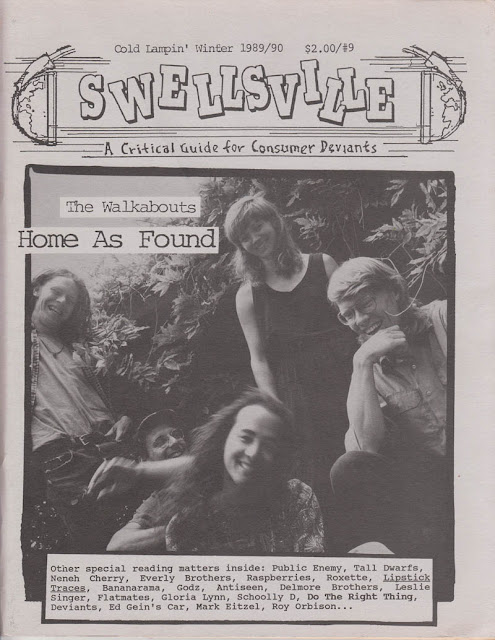