Some people have big dream-goals. Others aim low. I'm not the most ambitious person, but there is something I've been meaning to accomplish. I talked myself out of it so many times. No, I said—it's too much—don't overreach, you're bound to fail! And I like to think I hold myself to some standard of decency (in general). But decency be damned! I'm talking about, of course, posting every Tom Cruise crotch shot from the Ridley Scott's 1985 fantasy bomb, Legend.

I was going to my grave without ever stooping this low. But that was before I read Lawrence Wright's scathing exposé, "Going Clear: Scientology, Hollywood, and the Prison of Belief" (the HBO documentary is very much worth a view too—a brief summary of the most shocking facts is at Rolling Stone, here). Besides uncovering one of the most insidious cults of modern times, Wright points fingers at the people on top of the Scientology pyramid who benefit the most from their draconian rule. One of those people is Tom Cruise—the seemingly benevolent, if manic, movie star and winner of Scientology's Freedom Medal of Valor. Cruise, from what I've read over the years, is a nice enough guy on set, but his Scientology ways are dark indeed. He's benefited from his pampered role of Scientology ombudsman by decree of his buddy, pocket-edition tyrant and self-proclaimed cult leader, David Miscavige.

According to Wright, accolades of the church's elite Sea Org order sign away their lives to billion-year contracts of service. The hapless worker-drones then give the church not only their worldly goods, but their precious time to appease the sailor-suit wearing Scientology top brass. Cruise has reportedly had Sea Org workers over at his manse on several occasions for renovations, luxury-vehicle provision and maintenance, and other manner of skilled labor—free of charge. The workers are said to be making something in the realm of 40 cents an hour for this work, making Tom Cruise, essentially, their lord and master. And he's not just willfully exploiting those who are threatened with ostracization from family and friends, he's seriously touched by upper-management madness as well.

So what of Legend? Ridley Scott is one of cinema's most accomplished and prolific producer/directors. He's celebrated as the visionary behind Alien, Blade Runner, Thelma and Louise, and that 1984 Apple Macintosh commercial where a stylish lady in red running shorts hurls a mallet through a propagandist's vision, saving us all from a dystopian future of wearing gray pajamas while suffering massive hair loss. In any case, Legend is not one of his greater works.

Set in a claustrophobic forest (an obvious set) with enough sparkly glitter to supply a legion of preschool art projects, Legend could have been a miniaturized children's fable. But someone got the producers to throw a lot of money at it and cast a bunch of people who were more creepy than fanciful. And then that person decided Tom Cruise's crotch was going to be a major player in almost every scene. That person is Ridley Scott. Perhaps he had a crush on young Cruise and wanted to show the world his new-found love interest. Or he had it in for Cruise and damned him to a role known for its crotch shots for all time. We'll probably never know Scott's thinking process.

All I know is that when I saw this movie in 1985, I was gravely disappointed in everything but the last twenty minutes when Tim Curry finally steps on set as Darkness. Gliding through the best personification of the Devil in film history, Curry's makeup by Rob Bottin, according to Wikipedia, was so heavy and claustrophobic that Curry once tried to rip it off without soaking his prosthetics first, thus taking off some of his own skin in the process. That's some dark movie lore right there.

My only other takeaway from Legend was this: Why so many crotch shots? It was not a subtle director's choice. I vowed, thirty years ago, even though the Internet did not exist, that I would one day pontificate on these crotch shots and so here we are.

And now—until Tom Cruise comes clean about the evils of Scientology—the crotch shots of Legend.

For my important research, I was only able to get a Netflix DVD of the extended director's cut of Legend. Let me say this: twenty-five extra minutes of Legend is definitely twenty-five too many. The slug-like pace, inane dialogue (the goblin Blix talks in bad helium-voiced rhyme) and murky inaction will inspire you to multitask like never before. I got a lot of social-media posting done during the first 40 minutes or so. But I always kept my eyes open for the all-important crotch-shots, and I didn't have to wait long.

Here's our introduction to Tom Cruise's Jack—a "child of the forest," who apparently never learned how to sit on his bottom, performing in this squatting crouch in nearly all his scenes. Was Scott channeling monkeys or possums or some other squatty creature when he directed Cruise? The issue is not so much the squatting (although it looks painful and I'm sure Cruise's thighs were sore after each shooting day), but why did Scott choose to place the camera directly in line with his crotch over and over again?


With his luxurious hair and jagged-toothed smile (I like Cruise's pre-fixed teeth better—just an aside), Cruise looks the part of would-be fantasy hero. But he has a doubtful look in his eye—the look of: "Is this going to ruin my career before it barely got started?" Such a mind-state is deadly to fantasy, which requires complete earnestness while giving up all logic and reason. Still, he's game to try, however miscast.

Mia Sara, in her first role as Princess Lili, whose kingdom is apparently somewhere else off-screen, is mainly required to look nice while running through the forest in flowing garments, her arms placed at her sides, just so. Like many of the cast, she ends up uncomfortably underdressed. There's a lot of skin for such a would-be children's fable.


The flimsy plot of Legend is a sorry thing. Some latex-faced squeeky-voiced goblins are sent by the lord of Darkness to kill two unicorns (wearing plunger-like horns that wobble when they run), to rid the world of light. Lili touches a unicorn, which is forbidden. Some fairies, led by the underdressed David Bennent as Gump, wearing huge pointy ears, surround Jack in the now-dark and snowy (and glittery) forest and make him answer a riddle and then promise to save a unicorn whose horn got cut off and bring sunlight back to the world. Darkness tries to make Lili his (underdressed Goth) bride and so on and so forth.

Ridley Scott to Tom Cruise: "Can you crouch even lower, Tom? The camera's on the small tripod, you know!" Tom to Ridley: "Uh, sure!" (thinking: jeez, any lower and my balls'll freeze off)

One note: Gump is played by the fellow from The Tin Drum, and he's okay and everything, kind of resembling a Caravaggio Bacchus, but his voice was overdubbed by Alice Playten, who also played the goblin, Blix. Her hissy, whispery, very obviously womanly voice is so perplexing coming from of a male-child wearing a loin cloth in the snow.

Also, wherever Gump goes, a fairy light named Oona follows him (along with a couple of apparent leprechauns on a bender), and she somehow emits these soap bubbles (and face glitter) with her very presence. That's right—BUBBLES. Ridley Scott signed off on some bubble wrangler for this film and we just don't know why. My guess is, his heart wasn't really in this. His heart was too distracted by Tom Cruise's crotch.


And lest you have any doubts, here's an elf played by Billy Barty, kissing Tom Cruise's leg, which even in a fantasy kingdom, is pretty weird.

Ridley to Tom: "Please hold the sword at CROTCH-level!"

And here's his crotch in jail. I wonder if this is anything like the brig David Miscavige throws rebellious Sea Org members into, never to be heard from again.

And because I want to be thorough (this is for posterity after all), here's some really under-lit crotches.

Close-up—no other leading man has ever crouched this much in a major motion picture! 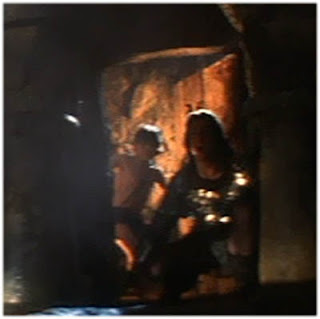 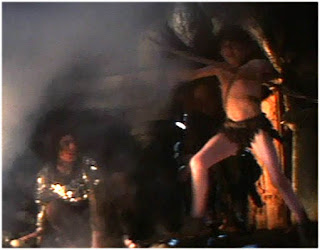 One of the unspoken rules of fantasy is that your secondary characters should be fairly endearing, even if they're kind of weird or awkward. Legend didn't bother to follow this rule. Everyone in this film (save Tim Curry, who's excellent, but even he is required to laugh at least once like this: Mwah ha ha ha ha ha haaaaah!) is expendable. It's sad because the makeup, cinematography and set design are lovely. It's as if Scott just couldn't be bothered with plot or character once he started shooting. He was lucky to cast Tim Curry. Pity he only exists in the film's final minutes.


Here's some fighting crotch action shots (I think this was the point in 1985 when I'd definitely reached my limit).

This is it: the last crotch—the money shot. Properly lit and presented for maximum crotch overdrive. It's no Tim Curry as the Devil, but I think you'll agree, it delivers.


There's a romantic kiss where even then, Jack's squatting, but his crotch is off-screen. At this point, you must use your imagination!

And here's Cruise's romantic love-sick grin of happily-ever-after. Perhaps this is what he looks like now when he orders his Sea Org minions around his palatial estate whilst counting his stacks of gold coins after each Mission Impossible release.


But wait—there's more! On the director's cut DVD, two lost scenes are included—one so lost it's pieced together with stills, sketches and a found soundtrack. And what do they reveal? More crotches. I present them here, free of charge—BONUS CROTCHES. 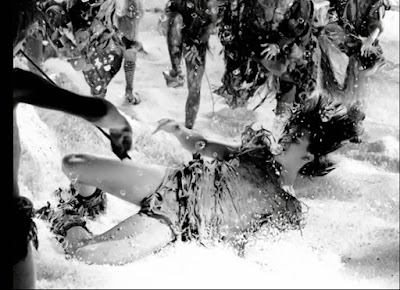 Billy Eichner explains Scientology much better than I in this modern classic "Escape from Scientology!!!" obstacle course from my all-time favorite game show "Billy on the Street."

Email ThisBlogThis!Share to TwitterShare to FacebookShare to Pinterest
Labels: mind-f, movie reviews you can use, the mooovies, uncool guys, What the

You are very funny. That was class.

Thank you. I am glad you enjoyed.