Jason Mercier has a way with celebrity junk

Celebrity collage artist, Jason Mercier, has a new show, "Celebrity Junk Drawer," at 5 Claude Lane in San Francisco. After asking for and receiving two boxes of junk from Phyllis Diller (she's the coolest), he sent letters to several other celebrities, asking for their crapola. He then worked his tacky-glue magic and the result is more than ten portraits for your viewing pleasure. 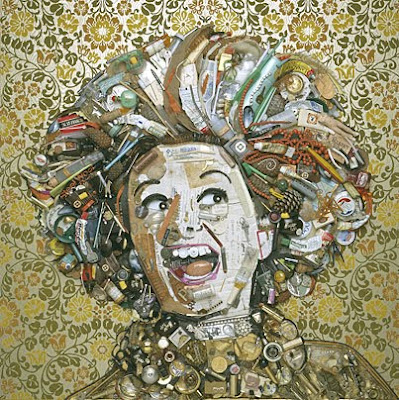 Jason used to be in the pop-culture junk band, Enrique, and they went all out, making elaborate 70s-era-like costumes, wearing scratchy, acrylic wigs, and playing in small clubs around San Francisco ALL THE TIME. So it's nice to see him become such a established fixture on the outsider art scene. He used to work strictly with macaroni and beans--branching out!

There's still some question as to whether this is art or not. Oh, get over it, naysayers. Let's see you make an accurate portrait of Kathy Najimi using brown-and-serve sausages.


Early work made from food.


One view off Jaina A. Davis' Victorian stairwell, covered entirely with tens of thousands of pencils, erasers, various office supplies and one lone pen. She commissioned Jason to make it and it took five years to complete. They were both in Enrique together. That band spawned a lot of weird art. Any questions? There's a FAQ. 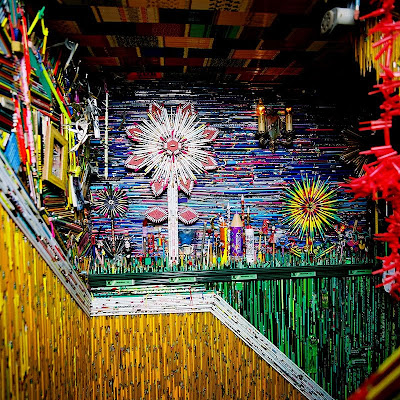 Clean out your house and help Jason by sending him your unneeded junk-drawer items. He explains how. I would love to see his workshop.
Posted by Miss Lisa at 10:59 AM

Email ThisBlogThis!Share to TwitterShare to FacebookShare to Pinterest
Labels: art for what ails ya, our weird world, San Francisco, What the

Just found your blog, really like it. Discovered it looking for Brick, for my wife's 50th dance party.
"And it features a killer flute solo, which is a sentence I've never been able to write before."
You've written many good sentences, over the months, as I now see, but that one is truly my favorite. We laughed out loud.

Also, glad you found some answers re: your son. I'm a special procedures/GI nurse.

And lastly, you might be my neighbor, having lived in Oakland, Berkeley, El Cerrito, etc. over the years. LOVE Fairlyland, used to go there in the '60s with my Grandma.

Thank you for the kind words. We're doing a lot better around here, thanks to modern medicine and a team of dedicated medical professionals. And ample amounts of frozen mac & cheese--never unestimate the power of comfort foods.

Hmm, I should do a post about Fairyland--a worthy place to ponder. Did you know Walt Disney was inspired to create Disneyland after visiting Fairyland? Oakland has much hidden greatness.

Glad you featured Brick's
"Dazz" at your wife's party. That song remains funky cool, decades later. I also love Parliament's "Flashlight," which tends to separate the funky from the non-funky almost immediately. http://www.youtube.com/watch?v=s3flYZ6LOsw

"underestimate." Although "unestimate" works as a Bushism, I suppose.