I'm so glad I got to see Tina just before her big 80s comeback. She performed in the tiny, non-atmospheric Barbary Coast in the hideous, concrete bunker that is the student union at San Francisco State University. It was me working the show, alongside a small but awe-struck crowd of fans, gay and straight.

Bill Graham Presents had some deal with the city that SFSU couldn't advertise their live shows because their low ticket prices were contingent on state funds, giving SFSU the "advantage" at pulling audiences from the Bill Graham conglomerate of clubs that dotted the city. Therefore, shows at SFSU were consistently under-attended. It worked to an audience-member's advantage, because you could practically sit onstage with McCoy Tyner, The Dead Kennedys, or the amazing Tina Turner. But look out! Because she and her backup singers tend to do some major dance moves, so don't get too close.

Ann-Margret cheerfully tries to keep up with La Tina. My friend Sherry sent me this because she's a cool chica.

I was out of town but now I'm back and more unfocused than ever. But all that's gonna change because school starts tomorrow and except for the fact that I have to get up at the ungodly hour of...I don't even want to get into that here—I'll be home alone for a few hours every day, just me and my thoughts. Alone, here with no one to share space with. Only the slowly moving molecules of the Indian Summer, flowing steadily alongside my inert form as I blog away.

On vacation, I thought of writing about how I had reached an epiphany and would no longer be online in order to get in touch with the real world in a meditative and contemplative fashion. But then I would write: JUST KIDDING! I'll blog to the death! And then you, the mysterious and perhaps nonexistent reader would chuckle and off we'd go into some YouTube world of 1976, featuring young Elvis Costello singing "Watching The Detectives" in the Granada TV documentary "The Way They Were - Punk & The New Wave" featuring Tony Wilson, everyone's favorite new-music pioneering promoter/producer, back in the Manchester day.

Oh, speaking of which: my former pen-pal-of-the-80s-now-Facebook-friend, David Nichols, steered me toward this Dangerous Minds' remembrance of Tony Wilson and this fine documentary of the British music scene, pre-80s. There's so much goodness here. Check out Tony's picks of the day:

You'll no doubt want to check out the interview and performance of Iggy Pop starting at 13:20, Blondie's first TV performance at 32:00, and that very fine rendition of Watching the Detectives by a very youthful Elvis Costello and The Attractions at 45:55. But it's all good; it's all evocative—the scene and the capturing of it on television and now online. NEVER FORGET. What was I talking about? Here you go.

Email ThisBlogThis!Share to TwitterShare to FacebookShare to Pinterest
Labels: the music is the message, time travel, TV party tonight

We're on a romance-comics roll around here. Today's tawdry entry is "The Kiss I Can't Forget," from Teen-Age Love, 1970. What a difference a few years make in the teen romance comic. Most of my collection comes from the mid-60s when girls were starry-eyed, a little naive, a little needy (okay, kind of insane at times), but basically of good heart and pure emotional yearning. Men were square-jawed, interchangeable lunkheads with nice cars, impressively furrowed eyebrows and a steady income. But we've entered the 70s and this story bypasses the summer of love for the summer of jerks. Big jerks. Obvious jerks. And Donna—the girl who can't get enough of them.

The teary-eyed girl in the foreground says it all—there will be few happy endings (ahem). 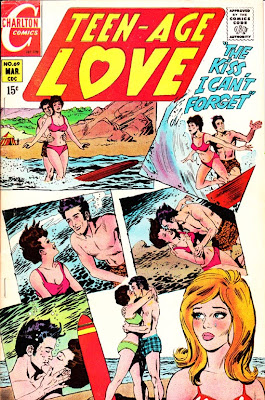 So Donna's making out with Vic on the beach of sexual possibilities while polka-dot-bikini gal looks on and then...polka-dot leaves with Vic...? Vic promises to be back the next day—alone this time. Donna thinks that's swell. RED FLAG, DONNA! RED FLAG! 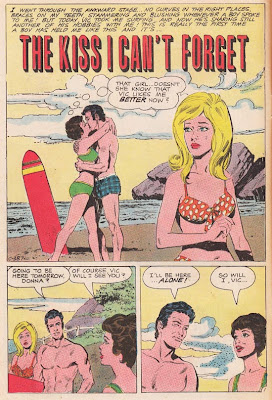 Donna remembers with sadness her first and last boyfriend, Jimmy, who treated her like the "kid sister he couldn't stand!" He wouldn't even go to the Discko Deck with her after the dance, and encouraged her to cover up on the beach due to her hideously deformed body, which looks perfectly okay here. Good thing she lost this creep. 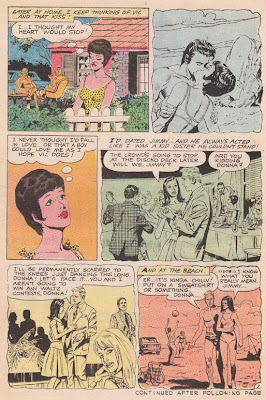 Anyway, strange and wonderful things have happened in the past year. Braces were removed, knees stopped being knobby and skinniness is a thing of the past. This is indeed groovy! 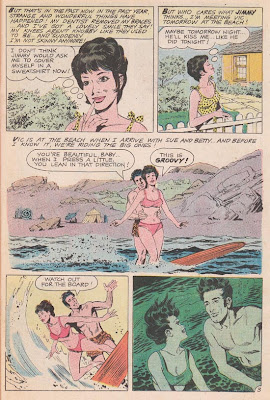 Wahoo! Kissing underwater while emitting air bubbles is an excellent way to get to know someone. Especially a someone who emerges from the surf, exclaiming, "I'm starved chick! Let's go over to the Devil's Pit and chow down! Rats! I left my green stuff home! I was thinking about you, Donna, and..."

That's right: it's all Donna's fault Vic forgot the green stuff. But she's a real sport and offers to pay anyway. Vic immediately is compared to a gigolo in a happy sort of way. 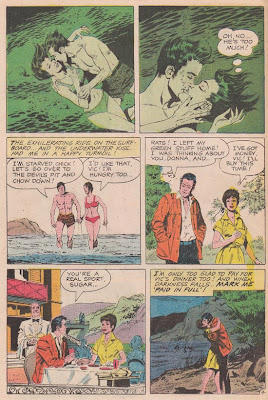 But hold the phone—it's Jimmy, out taking a stroll with Wilma Fath. He warns Donna that Vic is bad news when it comes to girls. Donna hopes he's just jealous—the putz! 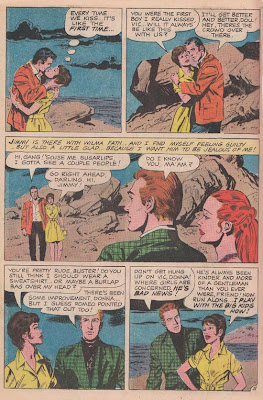 Meanwhile, Vic gets cozy with Trudi, an old buddy. He kicks Donna to the curb so he can "fix Trudi's car for awhile," warning Donna not to get "sickening" over it. Donna calls him hateful and he threatens to smack her one, to the delight of Trudi, who looks on with a bemused expression. Man, this comic is rough. Jimmy steps in and threatens to break Vic's jaw, telling Vic to paddle down the nearest sewer. 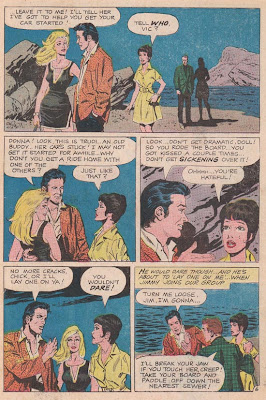 Which he does, Trudi in tow. Jimmy offers to give Donna a ride home. Her knight in shining armor!—who says things like "I dated you all the time you were homely enough to break mirrors!" What a dreamboat!

"You're a terrific chick now, Donna," explains Jimmy. "Every creep in town will be trying to take you places! You've got to be careful" Not with Jimmy though, see? Because Jimmy loves Donna. And Donna, oh, poor Donna realizes she has to be doubly careful around Jimmy, but she doesn't care because this is the first kiss of love, not those other bubbly ones with Vic. This is the real deal. The real crud deal. 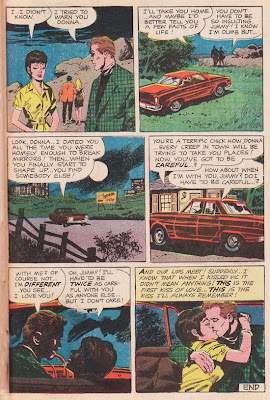 But what I wanna know is—what the hell happened to Wilma Fath?!?!

Hopefully our next foray into Teen-Age Love will be a more uplifting tale. But don't count on it in "Jonnie Love - No Hope For Tomorrow." 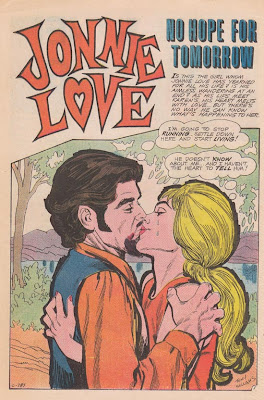 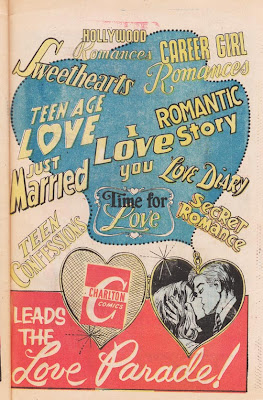 Email ThisBlogThis!Share to TwitterShare to FacebookShare to Pinterest
Labels: art for what ails ya, comix, mind-f, reading is free, romance comics, time travel

Email ThisBlogThis!Share to TwitterShare to FacebookShare to Pinterest
Labels: mind-f, the music is the message, What the
Newer Posts Older Posts Home
Subscribe to: Posts (Atom)