Here's to you, Turtle Boy

Fame is fleeting but this suburban Portland boy was destined for momentary greatness. During the Great Depression, Hollywood soothed the masses with glamorous Busby Berkeley extravaganzas. In World War II, the entertainment industry kept the home-fires burning with patriotic film and song, assuring us that in the end, we would prevail. The Vietnam War era fostered an independent and angry cinema with few happy endings.

Today it doesn't take much to placate us during war time. At least until the next 17-second YouTube phenomena is posted. After two million hits and numerous parodies, perhaps it's time we all moved on. Or not. Thanks Turtle Boy--you're a surreal little zombie and there's nothing wrong with that.

Email ThisBlogThis!Share to TwitterShare to FacebookShare to Pinterest
Labels: What the

Halloween is for Losers

OK, not really. I love Halloween. But I stopped dressing up and taking acid some time in my 20s. I'm keeping it for the kids and since my kid wants to be a garbage truck (again), all my costume-making energy goes into making his fantasy come true. He'll be a side loader this time around. It's getting tough to store all these garbage trucks around here. His dream is to one day own a home with a large enough garage to park his real garbage truck, which he will take on his morning route to pick me up so I can help out with the day's load-in. He will let me compact the garbage and his dad can ride along too if he wants. That's what Halloween is all about: fulfilling your fantasy life and getting way too much candy in the process.

I guess the Castro isn't even throwing a party this time around due to all the violence for the past few years. It's sad but there's always been a dark side to Halloween and I don't mean ghosts and witches. I mean people getting way too fucked up and beating up other people and waving guns around and forgetting where they parked their car and having to spend the night in your living room (and dressing like sexy Red Riding Hood--ew).

A lot of costumes are really lame for sure. Are you in a committed relationship? Demo that for the world to see on Halloween. Here's some great couple costumes for the next gathering of your peers. 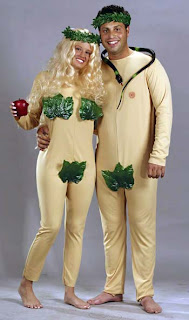 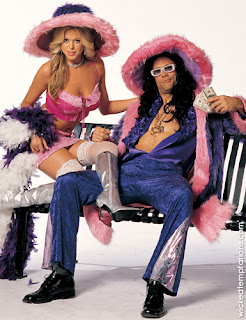 Looking good Adam and Eve and Pimp and Ho.

Are you single and loving it? No? Girls, these costumes will catch you a man in no time. Maybe even a guy dressed as a pimp (see above). He will be happy to add you to his stable in these fine ensembles. 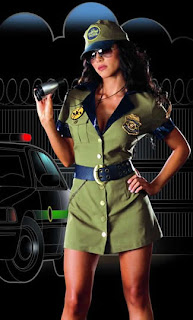 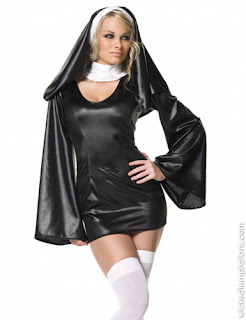 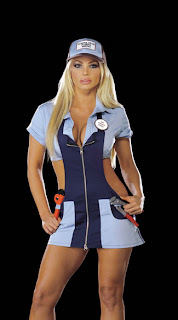 Hey, border patrol officers are sexy! Unless you're trying to cross a desert by foot after giving your life's savings to a sociopathic con artist who swore he'd get you to the U.S. in one piece so you could pound nails all day on a construction site if you're lucky. Then I doubt that authority figure will be featured too prominately in your sexual fantasies. Nuns are sexy, if you weren't raised Catholic, I suppose. I think if you were raised Catholic, nuns are the absolute opposite of sexy and will always remain simply scary, like a cop. Some people think cops are sexy, but not in a nun-like way. Oh, it's hard to explain. I just go round and round! Lady plumbers are really sexy until they hand you the bill; da-da-dum! Thank you--I'll be here all week. No, really, this lady plumber outfit is fi-i-ine. She's holding a pipe wrench. If you are not turned on by this there is something seriously WRONG with you. Seriously wrong.

RetroCrush features the worst Halloween costumes of all time; all 70s/80s; all store-bought. I was going to feature the Joanie Loves Chachi costume until I saw this: 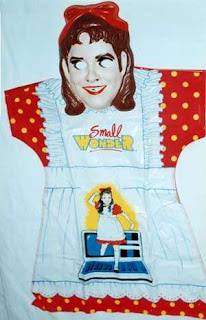 If you never saw "Small Wonder" featuring V.I.C.I., monotone-speaking girl robot, considered by many critics as "the worst television show of all time" (and costume), then YOU'RE the loser--not me.

Anyway, happy halloween. I'll be maintaining my son's garbage truck costume and its hydraulic lifting system, standing by with a roll of masking tape and a camera. I hope you stay out of trouble and gets lots of candy.

Ever seen Logan's Run? I was just thinking of renting it because it's been a while (1976--happy Bicentenial, America; enjoy the sci-fi gloom and doom). Michael York and a bunch of young attractive utopians live in a environmentally sealed dome where their every need and pleasure are provided by the government until they reach age 30. Then it's off to the floaty machine where they float, float, float to uh, Sanctuary.

There's a fine book (the only one that I know of) about matte painting by my former boss and friend Craig Barron. Really great stills of movies from the silent era to today. It tells the secret history of matte painters and their camera crews. So many films relied on these great landscapes and architectural wonders, painted on glass (created with actual paint and brushes!). Alfred Hitchcock was a aficionado of matte painting and counted heavily on these artistic tech-heads for many of the most famous scenes of his Hollywood films (that hopeful sunrise at the end of "The Birds"--matte painting; That cool spy-lair in "North by Northwest"--matte painting).

It's all done on computers now and not quite so magical a process (ever watch someone sit at a computer for several weeks at a time?--that's what it looks like). Check out Matte Painting: The Invisible Art.

Ever wonder what to do with all those tiny plastic liners in your coke bottle caps? Sure you do. Why not hot glue them into a bowl? That's what this resourceful crafter did and as you can see, the results are awesome. 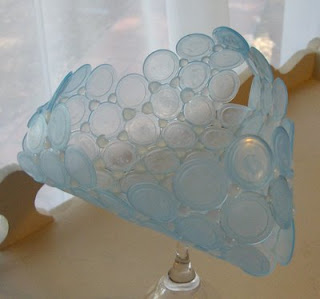 There's some kind of crazy craft resurgence going on. I used to make a lot of crafts with my mom in the 70s. She was very much into decoupage, the fancy French term for gluing paper onto objects, and she had all the special implements to do so, including Modge Podge (my collage glue of choice these days).

I remember a particular illustration of Don Quixote and Sancho Panzo on their steeds as tall, thin shadow figures posed against a dark mustard background. My mom filed down the edges of a big piece of wood to give it some indents all around, then stained it really dark brown, almost black. Then, once the giant image was glued on straight (a tension-filled process) she had herself some home-made Spanish Colonial wall decor to add to our Spanish Colonial living room. We were the only house in Concord, Calif. to have one of those (that I know of). At least it seemed that way because whenever people came over they always looked around and said, "Whoa, what's going on here?"

The couch was nearly 7 feet long and its fabric was covered in bright red and rust-red roses, giving it a cozy blood-cell feel. There were two wooden chairs that would have fit in at the Alhambra de Granada. The coffee tables were that almost-black stained wood with black wrought iron trim (still available in the garage, if I want them). Rembrandt's "Man with Golden Helmet" (a fake!) stared down at us while we sat on the couch. His daunting portrait was surrounded by bejeweled swords and giant gilt keys mounted on goldenrod velvet-upholstered plaques, studded all around with decorative tacks.

I'm not mocking my old living room. I LOVED that room. I fully expected the Spanish Inquisition to arrive at any moment and start chasing us down the hallway, yelling, "Heretics! Give us names and we may let you live!" The Spanish Inquisition had a torture policy very similar to our current government. Not to make light of the Spanish Inquisition, who were responsible for god-knows-how-many horrifying deaths, but my childhood fantasy world went something like this Monty Python sketch, as described in Wikipedia: 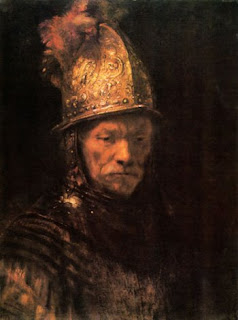