Get thee over to Bedazzled for some vintage James Brown video (and other nice stuff; unfortunately no "Hot Pants" but you can't get everything for free on the Web--yet).

Cityrag has the round-up of important celebrity dirt of the year.

And everything's still cute at Cute Overload.
Posted by Miss Lisa at 11:16 AM No comments:

Email ThisBlogThis!Share to TwitterShare to FacebookShare to Pinterest
Labels: link-tastic

A Toast to XMas

What Christmas means to me:

1.) Very tight shoulders: shopping, wrapping, writing Christmas cards 'til my hand cramps. Fretting over who to buy stuff for--what stuff to buy them. Paying for the stuff.

2.) Health concerns: one of us is always very ill during the week leading up to Christmas. This would be OK if we could shift Christmas day around. Like celebrate it a day later or so, until the sick person feels up to it. But my mom won't do that. Somehow the day must always be the 25th, even if you have the next day off from work. I don't understand this mentality. It's not even Baby Jesus' real birthday, and Christmas historically, was actually a mostly-Northern European invention to celebrate winter solstice and get through the darkest days of the season with sanity intact (i.e., slaughter all the cattle you couldn't feed throughout the winter, eat the meat and drink all the fermented beverages that were ready for consumption). It's a swell pagan holiday that the Christians co-opted, like so many other celebrations, and now it's just a big muddle of iconic images plastered across the landscape amid endless carols that are piped in any available public place you happen to exist in (gas-station bathrooms: do I hear "Hark the Herald Angels Sing" overhead? Yes.).

3.) Iconic images: Last week I was in big Longs Drugstore. Everyone in Oakland calls it Big Longs because it's just gigantic. It's like a funky Wal-Mart but no one protests its existance--it's an accepted part of the urban landscape. There's five or six Christmas aisles at Big Longs. And I noticed that one of the boxed ornament gift sets there consisted entirely of gambling devices: dice, slot machine, poker chips; all done in shiny, colorful glass in multiple colors. "When I think of Christmas, I think of gambling," I said out loud to no one (I'm getting crotchety, obviously). Several people tittered. The following week, I was hanging out in Reno, for fun, and I saw no images of gambling and Christmas, other than the festive decorations in the hotel lobbies and casinos. I don't know what this means, except that Oakland has its priorities screwed up and Reno is really downplaying the gambling of late.

4.) Family: My immediate family is really a great one. I lucked out in that department. I enjoy seeing them, talking to them and just thinking about them. My extended family has become another matter over the years. We all grew up together, aunts, uncles, cousins and even cousins' friends and other cousins. We were about as close as an extended family could be, but I guess there's a bit of a sociopathic gene running through this particular extended family. Therefore, as everyone grew, their temperments came to the forefront and slowly, the family "unit" began to decay. All it takes is a few people waving some guns around, threatening their spouses and children to put a damper on family celebrations. Then there's back-biting, stealing, paranoia, lying and passive-agressive manipulation to contend with. To a lesser degree, hoarding and overall anxiety. What a psychic stew! It really makes holidays a drag, to say the least. One by one, I've dropped my extended family connections. There's still a few good ones out there, but they live far away and I only get to see them once a year if I'm lucky. So Christmas is a real mixed bag for me, like for most people. It enforces this ideal of "family" and "friends" which may not be much of an ideal from year to year. It's propaganda of the cheery sort.

Sometimes Christmas reminds me of these two roommates I had. One became increasingly agoraphobic and wouldn't leave her pig-sty of a room for days. The other was really happy all the time and didn't see any problems about anything at all. Once, when I was feeling down about something, she told me that if I just smiled more, I would feel better because studies have shown that it takes less muscles to smile than frown. Every time I smile I think of these studies. Trouble is, I was born with a birth defect that actually makes it really hard for me to smile. It probably takes more muscles for me to smile than frown, and if that makes me kind of grumpy about life, too bad! I was born that way! Merry Christmas.
Posted by Miss Lisa at 10:52 PM 2 comments:

Death by Stork Rises Once More 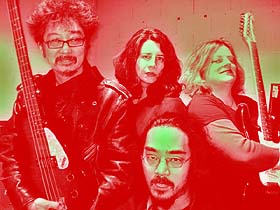 Yet another Death by Stork show this Thursday night, December 14th at the Stork Club (Telegraph at 23rd Street, Oakland). Show starts at 9 p.m. and it's $5--a holiday deal!

Here's the exciting line-up, sure to get you in a winter solstice mood:

She Mob - Suki, Sue, Alan and Lisa make a startling reformation in order to play three AND ONLY THREE rockin' pop songs and then record them a week later.

The Bleu Canadians - Live!!! from Canada!!!! explosive all new garage/psychadelic set. Free Canadian citizenship for everyone who attends. Also, free membership to the Edmonton Curling Club for the first 20 paid admissions. Also, come join us for our wild afterparty where we will race Zambonis. This is a benefit for The Canadian Temperature Fund.

Death By Stork - Searing songs of love, death, poop, and belly button lint. You just may have to get drunk and dance, folks. We will be joined by Lucio on bass--filling in for Tony, who's tromping around the Phillipinnes.

Fuzzy Cousins - Jenya Chernoff and Matt Lebowsky are a pair of primates that defy taxonomy. Highly evolved, their vast experience from mingling with other nomadic tribes (including Mumble & Peg, Three Piece Combo, Mark Growden's Electric Pinata, Species Being, and most recently with Faun Fables as characters and music makers in the touring production of The Transit Rider) is revealed in their music: even and odd, smooth and sharp, sweet and shattering. 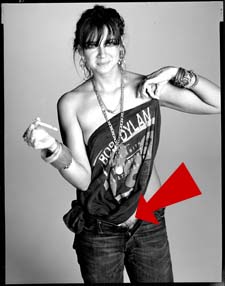 It's almost the new year. I just got used to seeing "2006" in all my correspondence. Now I have to bump it up to '07. When you've spent all your life writing 19_ whatever, it's very weird to to write 2000+. It feels like a work of fiction every time you date a check. But it's true--it really is the 21st century. Do you think when it's 2525, anyone will remember that bummer of a song from 1969 by Zager and Evans? Maybe--if man is still alive, and woman can survive, they may find...

Can I be the first to proclaim 2006 as the year of the vagina? The year the vagina made itself known in all its once-hidden glory? Don't be squeamish. Vaginas have been around a long, long time. If they're finally getting a day in the sun, I say, "Welcome--welcome internal genitalia and birth canal."

Back in 2004, Richard Avedon clicked a shot of Chan Marhsall's (a.k.a. Cat Power) pubic area peeking out of her jeans. The snowball trend started barreling down our consciousness hill and we're now in full-on vagina mode.

From Madonna's disco-enriched camel toe, to the Hollywood "It" girl crotch-shot trio (Paris, Lindsay, Britney), the vagina is making itself known, loud and clear. And if you're a bit modest and you don't want to acknowledge the new out-and-about photo op--too bad! The vagina is here to stay!