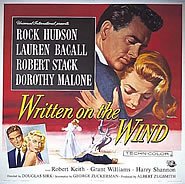 The year: 1956. The film: "Written on the Wind," directed by melodramatist extraordinaire, Douglas Sirk. The premise: Mitch Wayne and Kyle Hadley have been best friends since childhood--Mitch (the ever-manly Rock Hudson) is the steady, dirt-poor salt-of-the-earth guy. Kyle (grand scenery-chewer Robert Stack) is the alcoholic playboy, set to inherit millions from his oil tycoon father. When Kyle steals classy Lucy (stiff-as-an-emory-board Lauren Bacall) from Mitch, their friendship is put to the...oh, screw it, let's just get to Dorothy Malone. She's the best part of the film.

Dorothy played Kyle's sister Marylee, and although no one comes right and says the actual word (unless you count, "Your daughter's a TRAMP, mister."), she's Hollywood's ultimate nymphomaniac. The reasons to like Dorothy's portrayal of Marylee are many-fold: 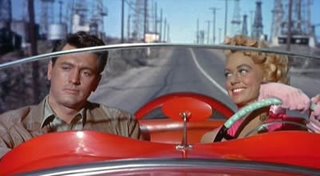 1.) She drives a terrific little red convertible--some kind of European sportscar in the middle of Sirk's idea of a butthole Texas town. There appears to be an oil derrick every ten feet, some dirt, and a local dive to pick up low-lifes in her spare time. At one point Lucy emerges from her doctor's office and there's an oil derrick in the back alley where Mitch has parked his car to wait for her. I'm surprised there isn't a big pumping oil derrick in the foyer of the Hadley mansion, but perhaps Sirk didn't want to take the idea too far. That said... 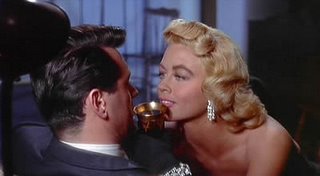 2.) ...Marylee is after Mitch--she's wanted him since their idyllic childhood romps in the ol' town swimmin' hole and she's not about to give up now, even if he loves another. "I'll have you Mitch Wayne," she commands while driving him around in her car, "Marriage. Or NO Marriage." You gotta give a low whistle of appreciation for her delivery of that line. 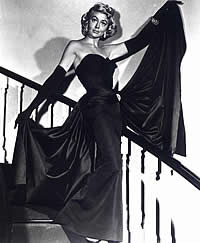 3.) Dorothy Malone's bizarro performance won her a supporting Oscar and she deserved it! You can't take her eyes off her and that's because she never stops moving her face around on the big wide-screen. It's like Sirk told her to act every scene like she had just snorted a big line of crystal meth. Or maybe she did snort a bunch of crystal meth, or popped some of those 50s-era joy pills that were such a staple in the studio-system acting style. But she is wiggle-ley. At one point she dances a rumba that apparently gives her father a heart attack in the next room. She's just too much. In this era of botox'd mannequin starlets, Dorothy Malone is a welcome bit of nervous tickery. 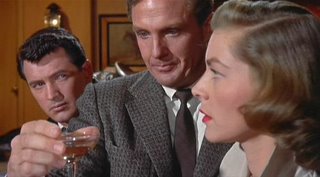 4.) She makes Lauren Bacall look even MORE wooden than she actually is. It hardly seems possible to do so, but there's more expression in your soup spoon than in Bacall's entire performance. Except for the crying scenes where she buries her head against Rock Hudson's formidable chest. She does appear to be crying in these scenes, but she's no match for Dorothy's sly, cunning, conniving, treacherous, lecherous, plotting, teasing, cackling face. And that's just during one dinner scene. 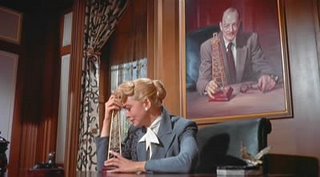 5.) SPOILER ALERT: Marylee ends the movie by fondling a scale-model of an oil derrick sitting atop her dead father's desk as Mitch and Lucy drive off into the dirt-filled sunset together. And she really fondles it. Not even subtle--Sirk was such a crazy madman. How it got past the censors... Anyway, it's one of the funniest film endings I've ever seen. Plus she's crying and wearing a conservative gray suit while doing it. 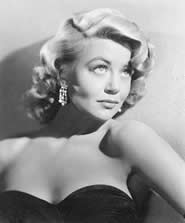 To conclude: I love Dorothy Malone and if you rent "Written on the Wind," you will too.
Posted by Miss Lisa at 9:48 PM 1 comment: