She Mob video - Was Ist Das?

Hey, it's another She Mob video. This one's from our second album, "Turn to Chocolate," released way back in 2001. I haven't made any videos from this album—UNTIL NOW. So enjoy this exclusive outing into the quagmire that is my musical mind.

Was Ist Das? is the story of a love affair going sour. Maybe. It could go either way, but it's probably not going so good. You know the feeling. And it may be referring to writer David Talbot, although it's pronounced "Daveed" in the song. And it's not autobiographical. And that's all I'm going to say.

Except to mention Myles Boisen's awesome special-guest guitar solo, and Alan Korn on lovely pedal steel. Joy (Sue) Hutchinson's playing rhythm guitar and singing excellent background vocals in German alongside Diane Wallis, who's fiddling so nicely. I'm singing lead and tippy-tapping on the drums. This is one of the few She Mob songs that contains a bridge—something we're proud of.

Now, the film—I hope it doesn't hurt your eyes, but this footage, shot in the late 60s and found in a basement of a closing-down business in Rochester, New York (coincidentally around the time the song was released), is naturally deteriorated. No art students have had a hand in the chemically distressed nature of this look backwards at amusement-park fun. It's available for viewing in its entirety under the title, "Decomposed Carnival," on the Home Movies collection of the Internet Archive.

Email ThisBlogThis!Share to TwitterShare to FacebookShare to Pinterest
Labels: She Mob, the music is the message, time travel, today's video

My friend Sher rates this as "creepy." My work here is done. From the fourth She Mob album, "Right in the Head," available at CDBaby, along with other fine She Mob musical products. Footage from the always appreciated Prelinger Archive.

Email ThisBlogThis!Share to TwitterShare to FacebookShare to Pinterest
Labels: She Mob, the music is the message, today's video

Thank you to to Vacant Moon for uploading this live Faith Healers regrouping from a small Brooklyn club in 2006. It's a little lazy of me to just embed and run here, but I enjoyed this so much, I wanted to share. The recorded output of Th' Faith Healers was a bit spotty. Their main superpower, as this demonstrates so well, was the live show.

An indie band from Hampstead with a cult following, Th' Faith Healers are pretty mysterious to most. Tom Cullinan's effects-box guitar playing is like three band members in one. Singer Roxanne Stephen's voice softens Cullinan's hard edges while fully embracing the aural madness. Bassist Ben Hopkin and drummer Joe Dilworth are mighty powerful rhythm masters, grounding the sound waves before they fling themselves into the stratosphere of total chaos.

Th' Faith Healers emit a psychedelic drone, free-form madness and angst, while providing experiments in compositional control. A jam band—one of the finest. As for their musical influences, note the cover of Can's Mother Sky at the one-hour (second encore) mark. You're gonna plotz.


More! The People from the "The Imaginary Friend" album - a slow build to rhythmic-drone intensity.


Don't Jones Me from the Too Pure label's 1994 compilation, "Pop (Do We Not Like That?)." Th' Faith Healers would break up soon thereafter. This is their second version of the song, slightly different from the one on their 1993 debut album, "Lido." It was recorded and released for U.S. college radio distribution, and it shreds.

Email ThisBlogThis!Share to TwitterShare to FacebookShare to Pinterest
Labels: cool girls, cool guys, the music is the message, time travel

Movies You May Have Missed - Only Lovers Left Alive (2013)

I didn't know Jim Jarmusch had released a vampire film in the last couple years—I was completely in the dark about Only Lovers Left Alive, so to speak. Its marketing budget must have been quite under-funded. Jarmusch is an interesting director who's content to make films about people talking, walking and driving. He's not overly concerned with the concept of story arc. He's an idea guy, a visual guy, and he plays in the band Squrl. He's an artist.

His earlier films, Stranger Than Paradise, Down by Law, Mystery Train, and I'm going to throw in Dead Man, felt fresh and playful, no matter how decayed the vista, or lost the protagonist. Beyond that, I kind of let go of Jarmusch. I was so annoyed by the miscasting of Winona Ryder as a grease-monkey cabbie in Night on Earth, that I just shut my Jarmusch door. It was unfair of me—but Ryder had been cast in so many films at that time, even in roles that she couldn't possibly fulfill. I couldn't take it anymore.

So of all things, why would I recommend a Jarmusch VAMPIRE movie? I like a good classic vampire story, but modern vampires are done, especially romantic vampire sagas. Jarmusch tried to make this film nearly a decade ago but couldn't get the funding together. So it stewed and brewed in his consciousness and oh, the resulting visual richness! I am such a sucker for decay and artistry of the past. If you are too, this could be your sleeper DVD rental. Plus Netflix recommended it for me, and they're never wrong. But it's a sad state in the distribution industry when I can't even remember how I discovered this, from a well-known independent film director no less.

What does the Jarmusch treatment add to the overworked genre? The idea of immortality weighs on the narrative, specifically for vampire Adam (Tom Hiddleston), who resides in an abandoned mansion in Detroit. His centuries-old wife, Eve (Tilda Swinton), finding delight in speed-reading books in multiple languages within her bohemian lair in Tangier, seems more at ease with her agelessness. Her pal, Christopher Marlowe (John Hurt), can get her the "good stuff." Blood as a drug is a recurring motif, and Eve, swathed in brocaded silk, silently walking the back-alleys of Northern Africa like an urban spirit, finds joy in nature, dancing and love.

But Adam finds modern life depressing. He especially decries the lack of care of the environment and in people. We have let ourselves go to the point that our blood is potentially poisonous for a modern night-stalker. These vampires have to find untainted blood through underground sources. Getting a daily blood fix requires a highly specialized dealer.

This is ultimately a love story and a believable one. If you don't mind a quiet, contemplative look at endless night-bound existence, you'll appreciate this Jarmusch-created world that looks familiar but feels like an ongoing dream. And now: 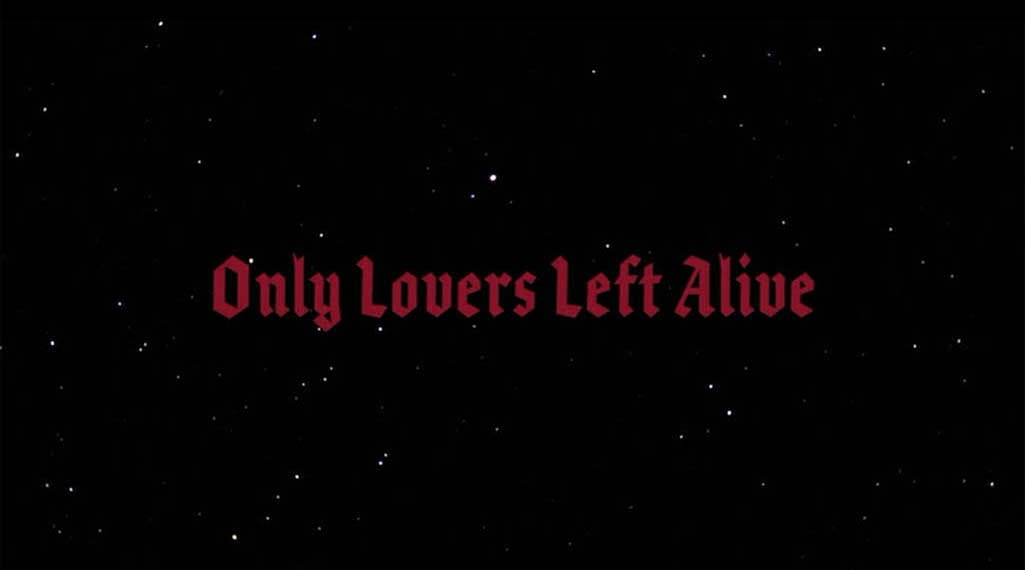 This film can be taken as a celebration or a satire of hipster culture. If you find that unappealing (it's a wry look at centuries-old creatures who can't help but look backward all the time), then just enjoy the sumptuous visual ecstasy of old-technology form and function. 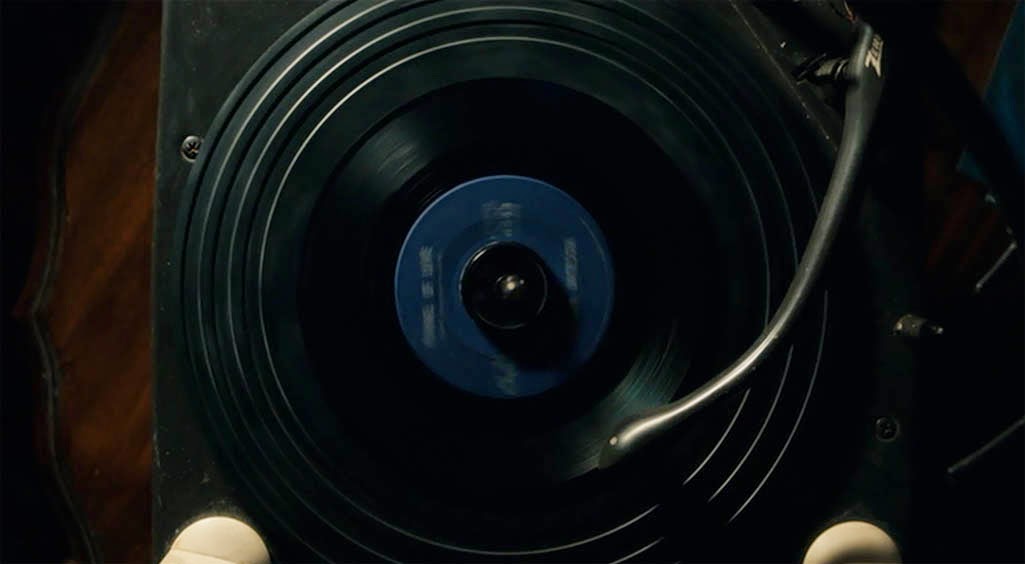 A dirge-like cover of Wanda Jackson's "Funnel of Love" spins us down into the psychic connection between Adam and Eve. 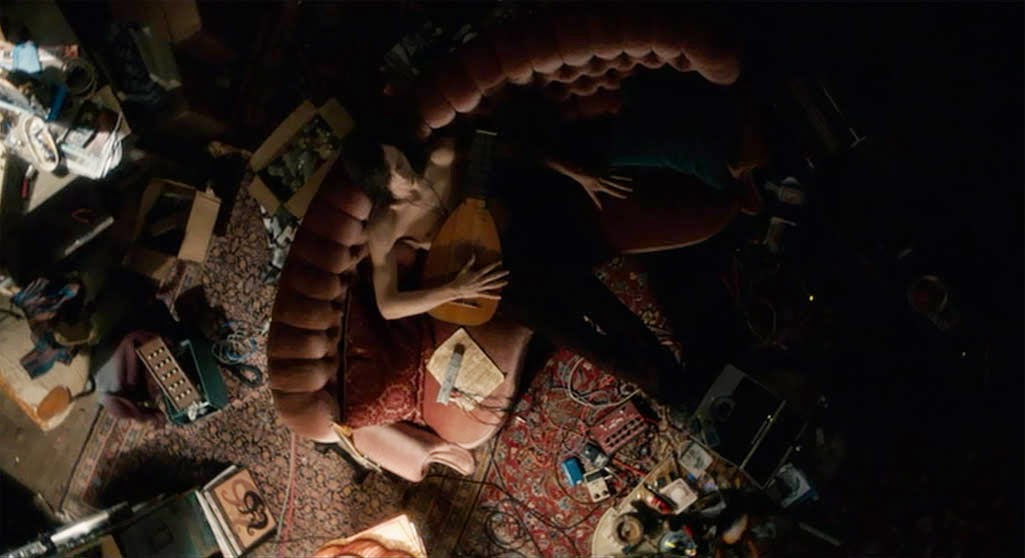 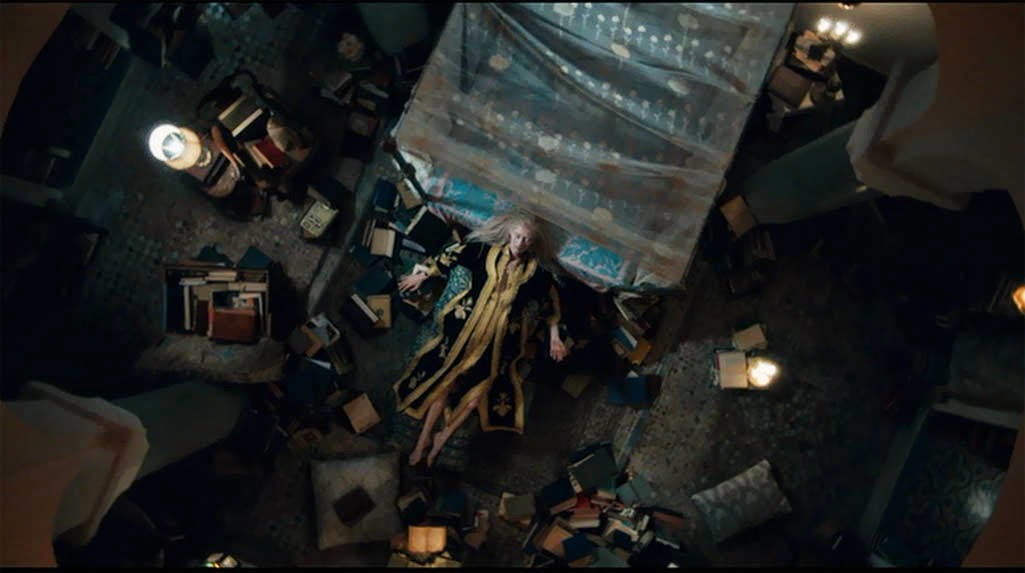 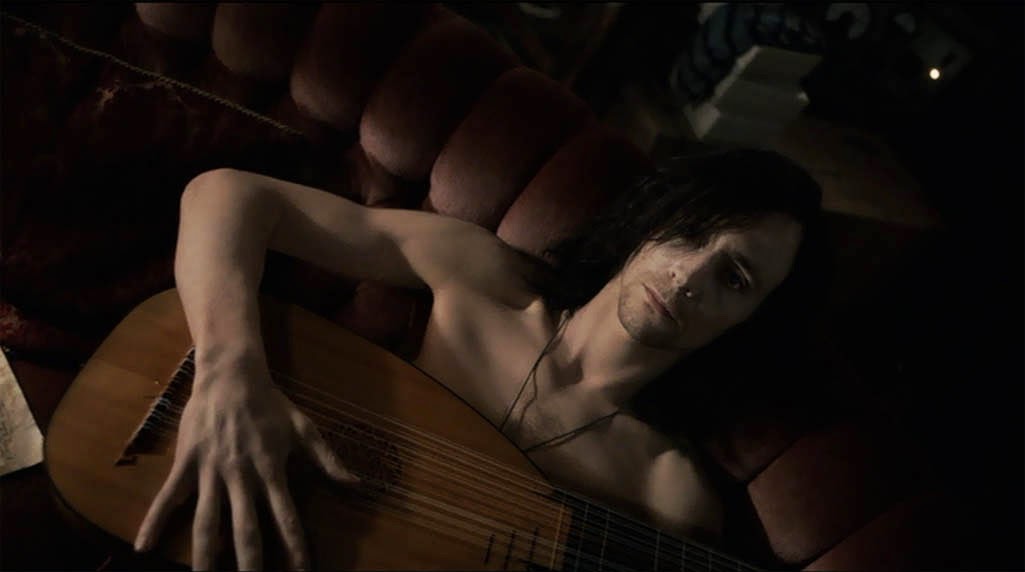 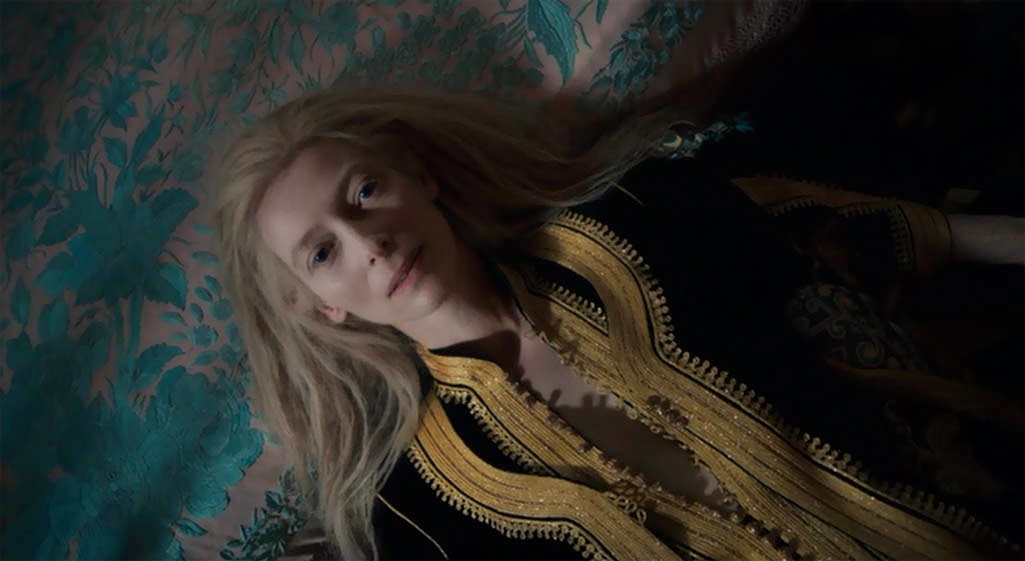 Adam is a musical gearhead cult star, layering drones and feedback on reel-to-reel tape in his cobbled-together home studio. By personal philosophy or vampiric necessity Adam has come to loathe the concept of fame, glorifying art for art's sake. His connection to the outside world, Ian (the perfectly cast Anton Yelchin), sells him vintage guitars of incomparable beauty and excellence. Ian may also be leaking Adam's music and whereabouts to the outside world but this narrative goes unexplored in order to focus our rapturous attention upon fine, beautifully crafted musical instruments. 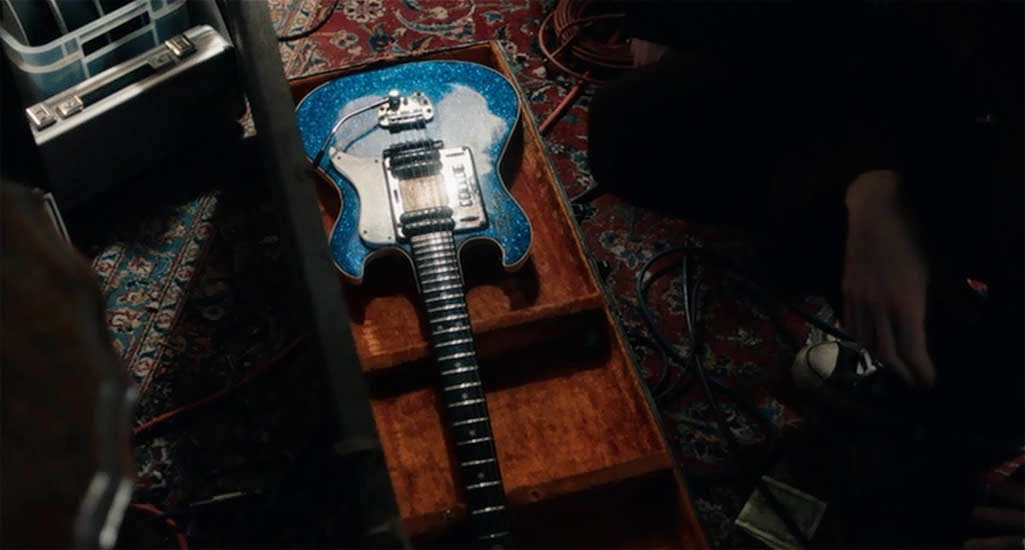 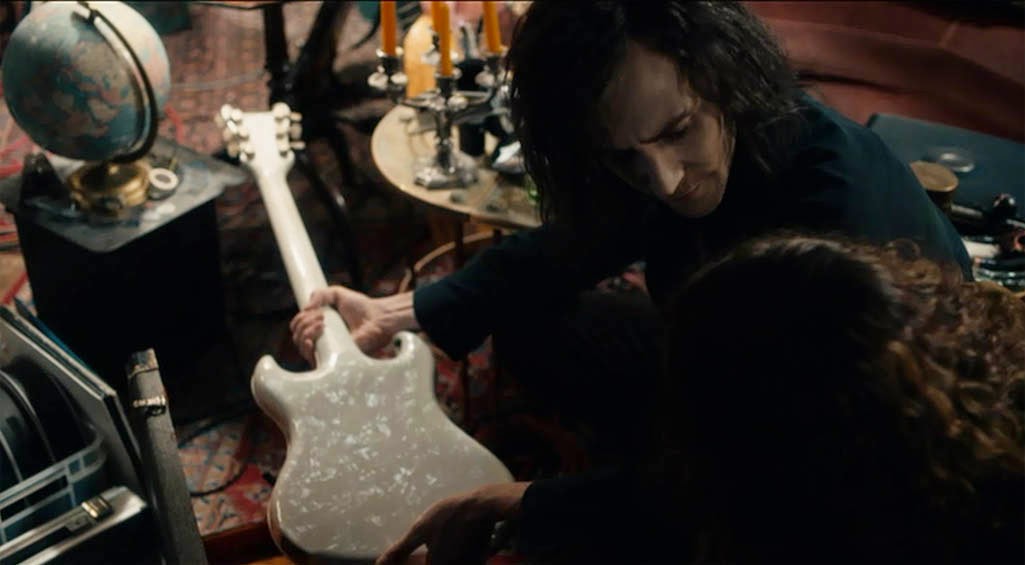 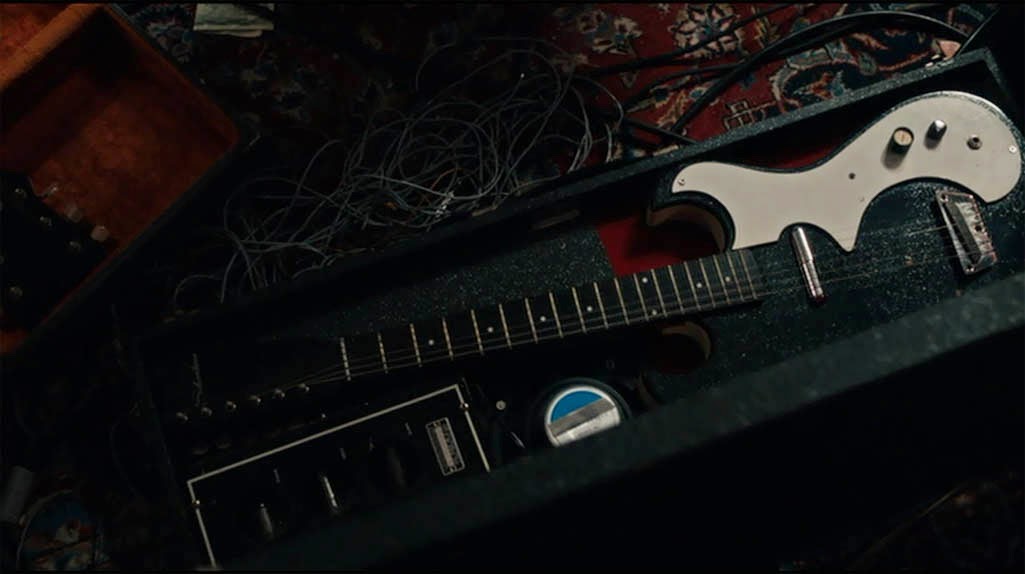 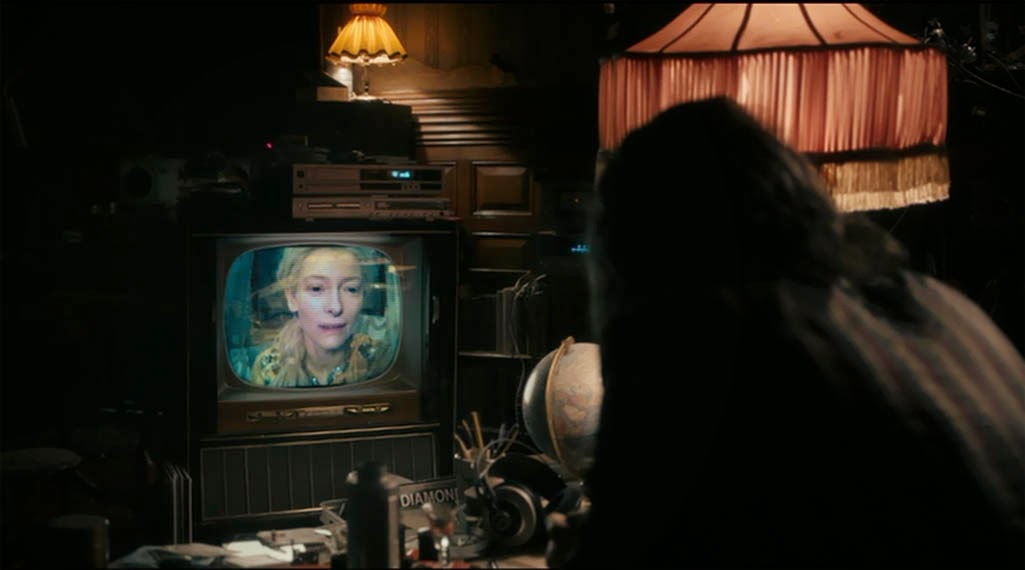 Eve surrounded by literature. My kind of vampire queen. 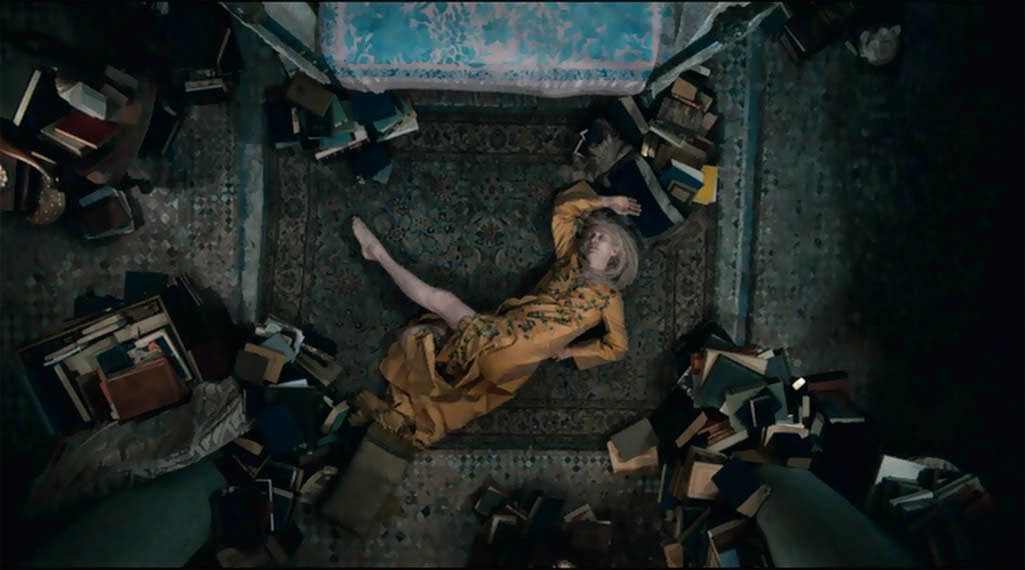 I've been in houses like this—ideal for creativity to thrive but dust-coated and not recommended for asthmatics. 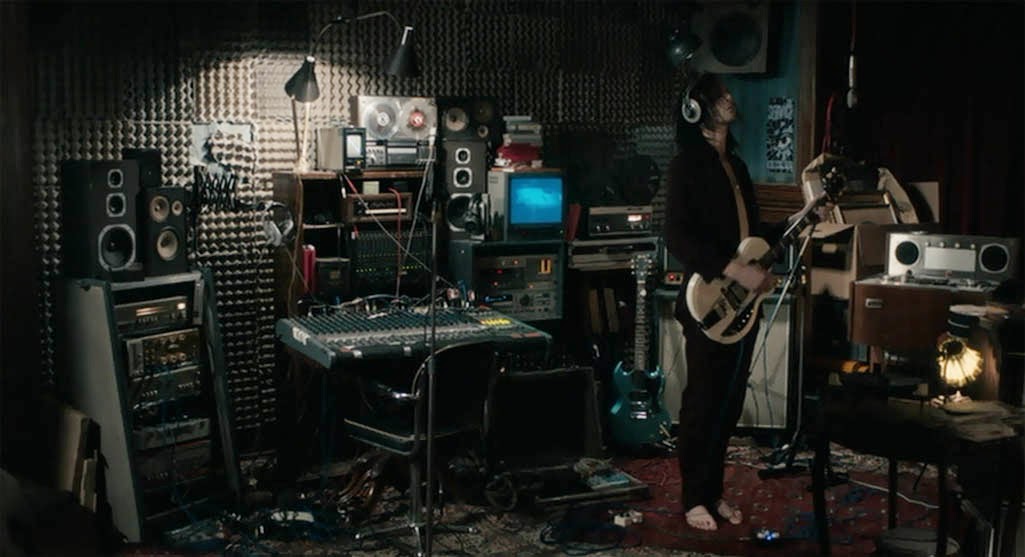 More objects. Have collections of old stuff ever been more lovingly lit and filmed? When I realized  Jarmusch was more in love with his set design than his characters that's when I actually started liking this film a lot. Film as visual medium still entices. In their isolation, these two have an intense connection with aesthetics. They're artists and artists can be annoying and self-involved. But we need them to make sense of our chaotic existence. Hail, art. 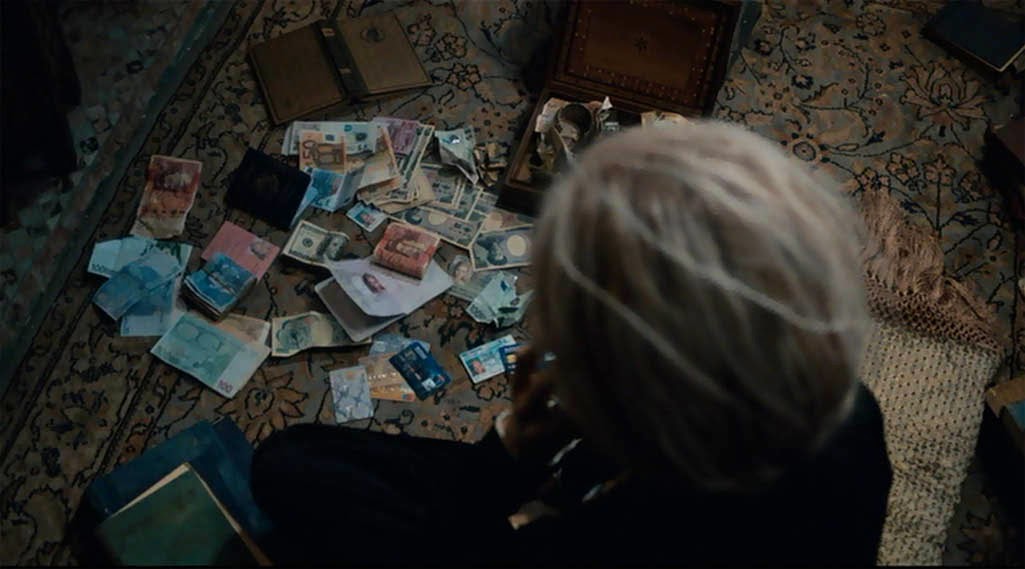 Detroit figures into this as well. On Adam and Eve's night drives, Detroit's former greatness and current decay is a character unto itself. 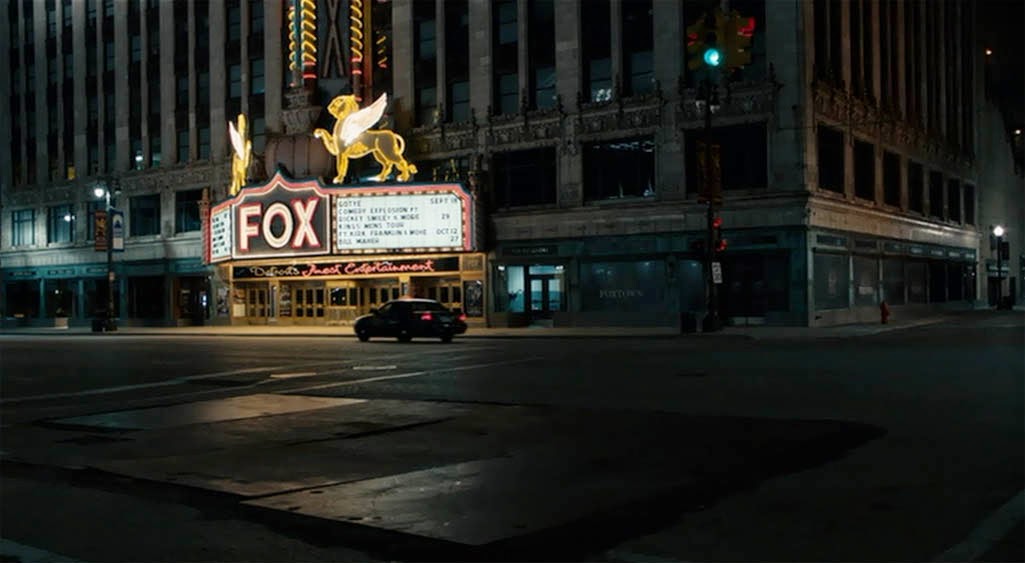 ALL THE WORLD'S BOOKS. And all the time to read them. 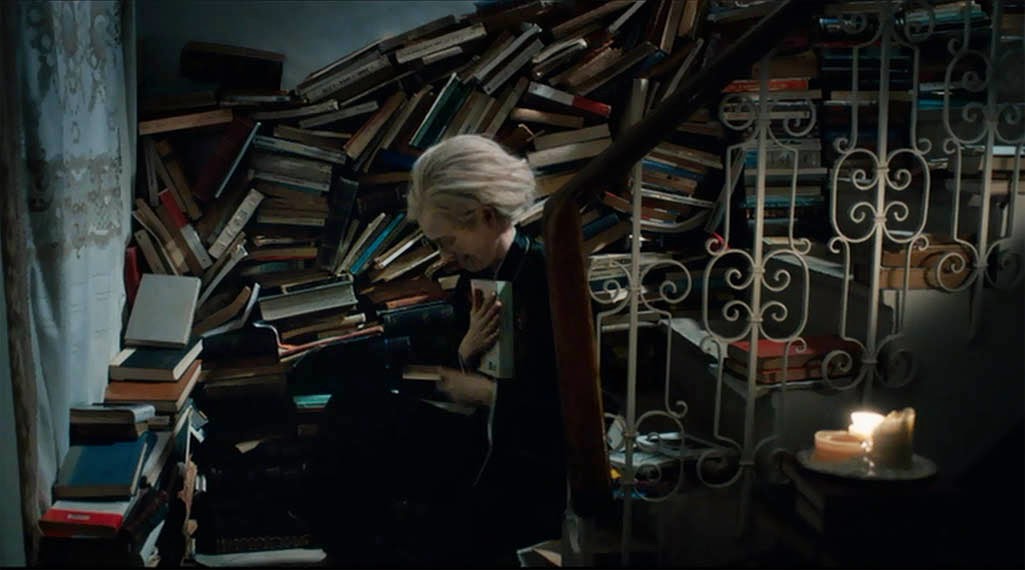 Adam's manse. We're not told how Adam can afford his lifestyle. He pays for everything with wads of cash. Perhaps he invested wisely over the years...? 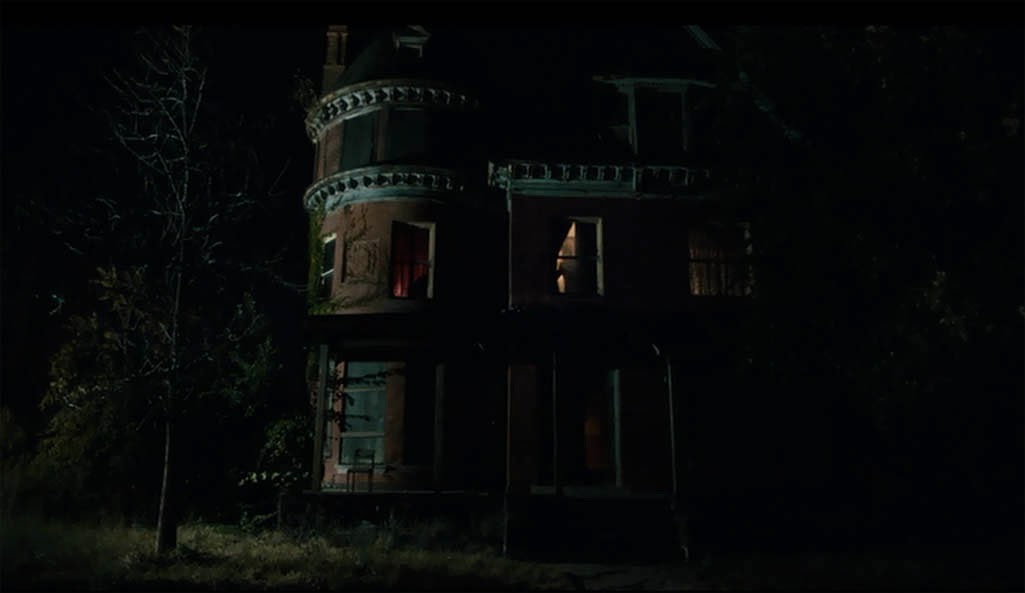 We also never know why they choose to live separate lives when they get along so well together. Maybe you just get sick of your partner after a few centuries and need a break. 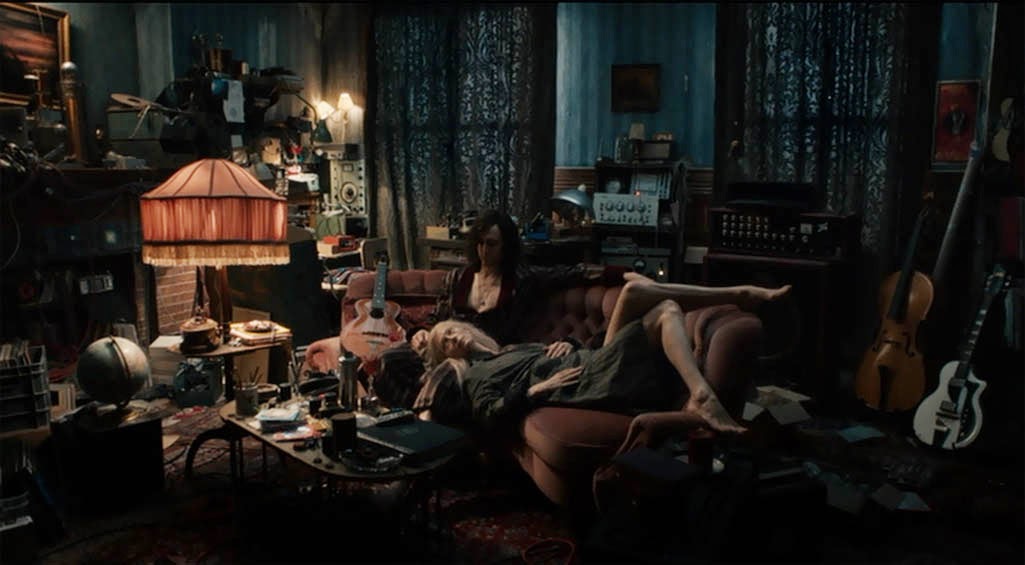 More Detroit. The cinematography, like a threadbare velvet painting. 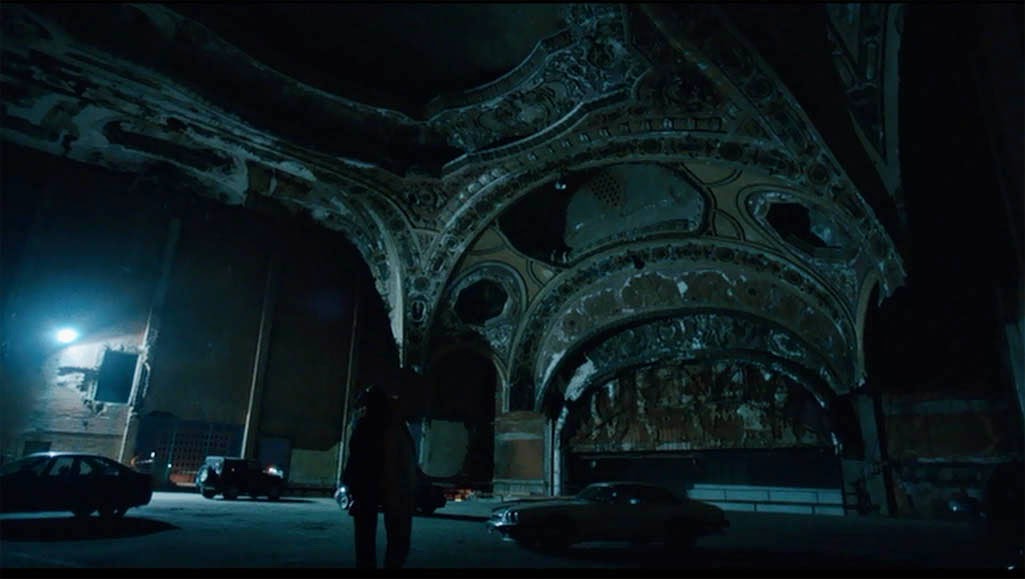 Adam in the light. 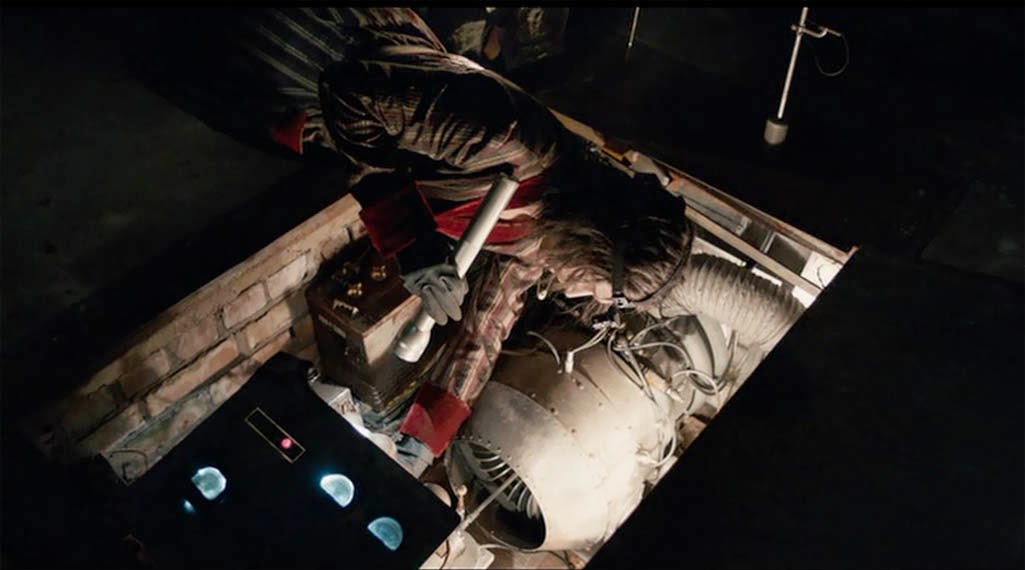 More objects in the dark. 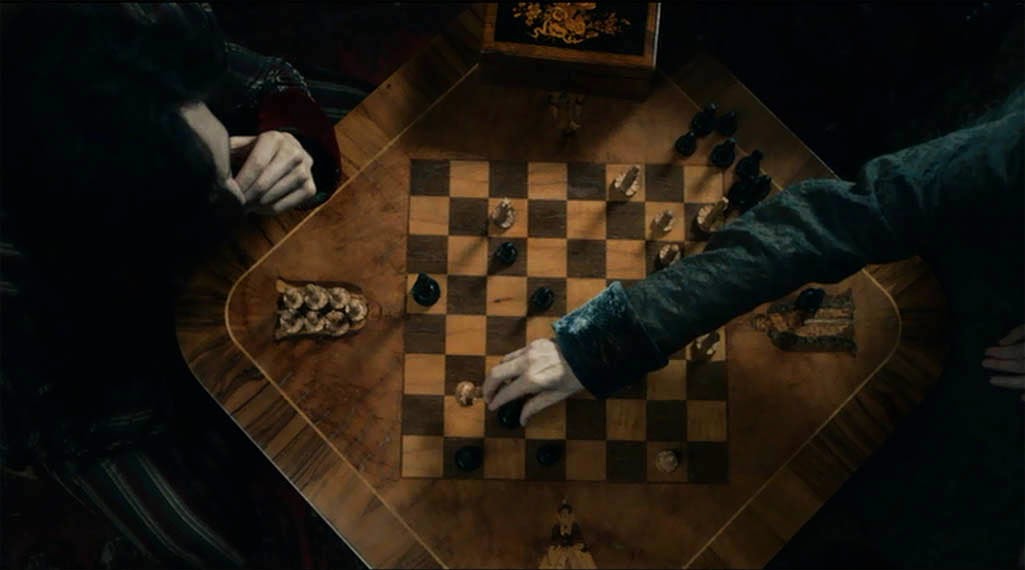 A visit from Eve's sister Ava (Mia Wasikowska), is described in the film's summary as a "disruption." She's trouble all right. But dread and horror are secondary concepts in this story. Eternal survival of body and mind is of more interest in Jarmusch's thoughtful approach. As I face the back-half of my lifespan, that's interesting to me.

Only Lovers Left Alive isn't for everyone, but as a meditation on time, art, and eternal love, it works.

Email ThisBlogThis!Share to TwitterShare to FacebookShare to Pinterest
Labels: art for what ails ya, movie reviews you can use, the mooovies
Newer Posts Older Posts Home
Subscribe to: Posts (Atom)