The Christmas-light Displays of Concord, CA

Forty miles east of San Francisco, at the base of Mt. Diablo, sprawls Concord, California. Literally once a cow (and orchard) town, it now has endless housing developments, shopping centers and even Cal State East Bay Extension (or something to that effect) among its over-grazed hills. Also: Christmas-display lights. Many of them. A small sampling from this Christmas Eve. 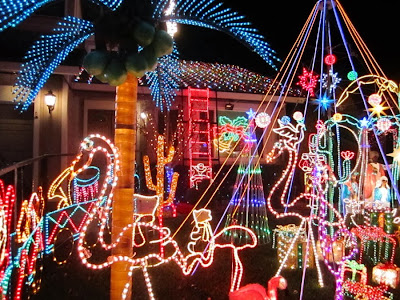 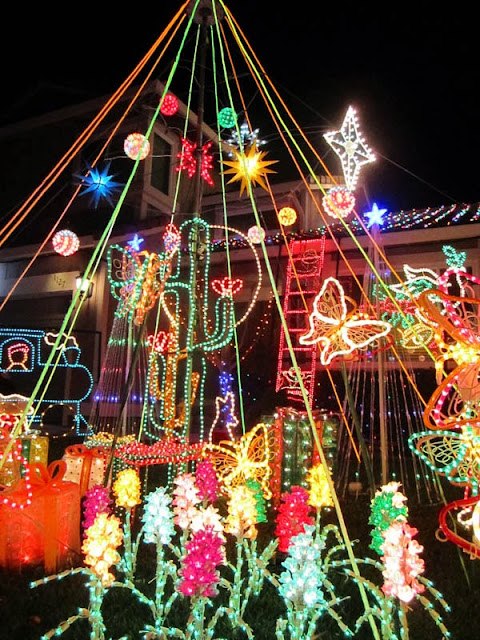 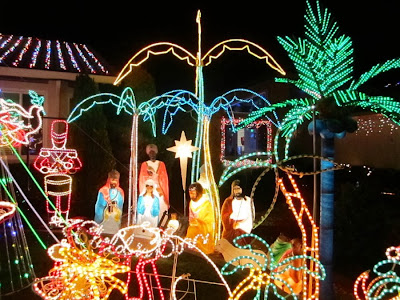 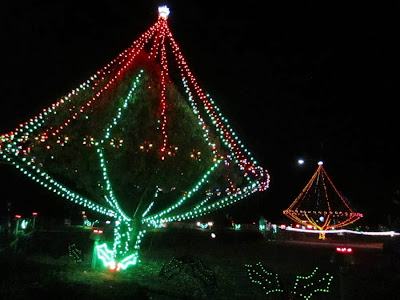 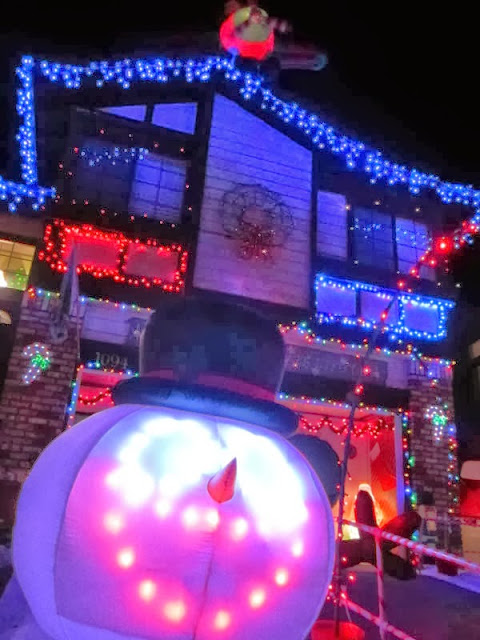 Email ThisBlogThis!Share to TwitterShare to FacebookShare to Pinterest
Labels: holiday angst, our weird world, photos, today's video, What the

Have Yourself a Little Music at Christmas

I'm wrapping presents and tying bows
Haven't got time for regular life
But here's to you with a HO HO HO!
It's not easy being a Christmas wife

Have a jolly time.


John Coltrane, with Elvin Jones, Jimmy Garrison and McCoy Tyner - What Child is This? (Greensleeves)

Email ThisBlogThis!Share to TwitterShare to FacebookShare to Pinterest
Labels: holiday angst, the music is the message, time travel

It's time for another edition of Tiny Totz Comix, which is great, because I only have two editions to choose from, and that makes for easy-street posting. This comic was never published so it's in the public eye for the first time, 17 years after I drew it. Their other adventure, "Puberty Shmewberty!" made it into Action Girl Comics, but editor Sarah Dyer rejected this one due to its Satanic theme. Action Girl was after all, for girls, not for smartass adults, like me. I like these Tiny Totz and perhaps I will continue their adventures. They've got moxie!

One thing I realize, all these years later, is that I drew these on standard 8 1/2"x11" paper—all 12 panels of it. That's a little insane. We're talking wee little tiny drawings here—not a lot of space for detail. But surely that was purposeful since I'm not very detail-oriented when it comes to my comics. And the tiny squares helped me develop the story best. I mean, these girls had adventures.  And I wanted them to fit on one page so I would have a better chance to be published (in plenty of non-paying publications, of course).

I drew comics throughout the '90s, but these were some of my last. I had the burn-out. It has to be your main passion, comics, because as simple as they are, they're a lot of work. Still—what joy—like a tiny movie, but more old-fashioned. People have been drawing comics since the dawn of time, that's for sure. 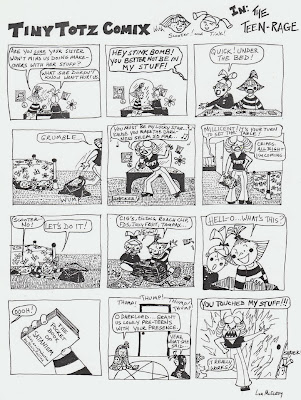 Break it down: based on real teenagers I had known while growing up in the suburbs. They all had big purses, tight jeans, and really great hair. They were not known for their diplomatic ways with the younger crowd. My best friend's oldest sister had a book of etchings based on Dante's Inferno, full of horrifying visions of writhing, naked sinners, burning in lakes of fire, beheaded and/or stuck through with pitchforks. We assumed she was studying to be a witch, but perhaps she just liked extreme art history. I don't know—she lived by herself in the family pool-house, so you never can tell about that...

Email ThisBlogThis!Share to TwitterShare to FacebookShare to Pinterest
Labels: art for what ails ya, comix

I cleaned out my garage this weekend and look what I found - the golden age of my comics career (such as it was). Throughout the 80s and 90s, I submitted comics to various fanzines throughout the nation. Sometimes I got published, and then I'd receive loads of submission copies to send to all my friends. It was a golden age, I tell ya! "Tiny Totz" was to be a series, but I only completed two of them. I have more scripts (I found my old journals too—my garage is chock full), so I might just take these up again.

The pals in Tiny Totz, Scooter Pye Mullman and Tinker Belle Vandermeier, were completely based on friendships I had growing up in the suburban 70s during the hands-off parenting era. We were the last of the baby boom and it was like The Island of the Wild Children in our rural cul-de-sac world. But the attitudes portrayed are all 90s-smartass, obviously. A cultural stew!

This episode, "Puberty Shmewberty!" appeared in the comic compilation, Action Girl #11, published by Sarah Dyer, probably in 1996. It was printed on paper because paper was still happening, and it looked like this. 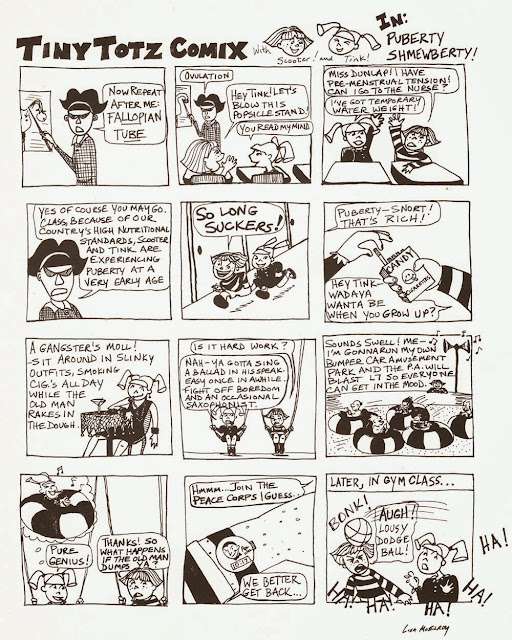 But I'm going to break it down because this is the Internet, dammit. Click for bigsies.

Email ThisBlogThis!Share to TwitterShare to FacebookShare to Pinterest
Labels: art for what ails ya, comix, time travel

More Mail Art While I Figure Out My Next Move

Mail art! That's what's happening. Also, sitting on my butt, writing a lot, lately. Which is good. But when there's a lot of writing, there's not as much art. Here's what I managed to send by post in 2013. 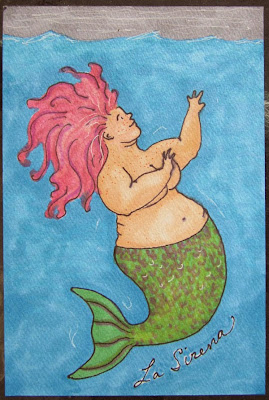 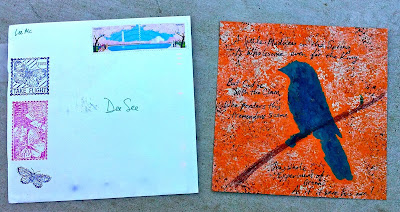 This is a hostile-garden scene, based on a creative writing project my friend Dee See and I are collaborating on. 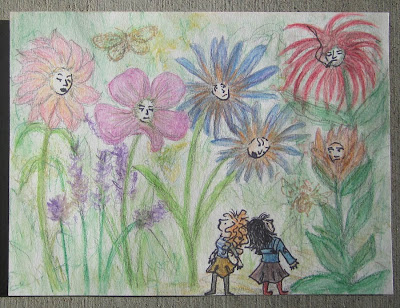 I honestly don't know what this is. I get a lot of kitschy little calendars in the mail from nonprofits looking for funds. This calendar celebrated 12 months worth of saturated photos of the Cascade Mountains. I like to paint or collage on them at will (they make great gifts for New Year's). This is a sort of mountain-spirit project. 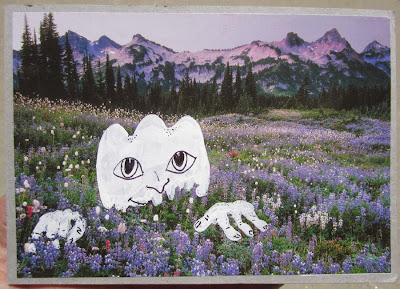 I made more. There's a lot of Cascades. This is the unfinished cover of an unfinished book of poetry and illustration from a re-purposed cardboard baby book. 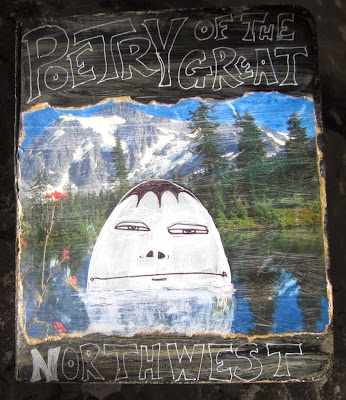 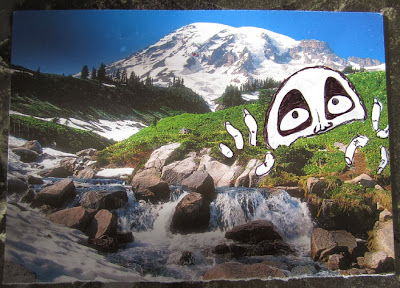 Mt. St. Helens' spirit looks pretty shaken up still. We used to live 40 miles away from this mountain and could see it on the way to the gym. I must have been beautiful before it blew its top. 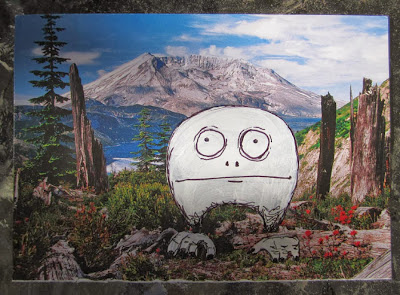 This Narwhal was made from the inner workings of a broken self-inflating whoopee cushion. Those things never last. 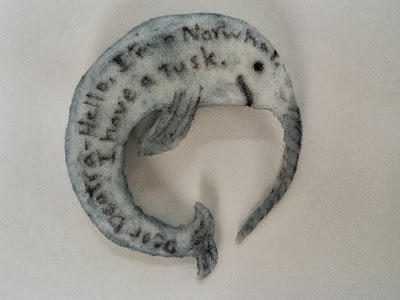 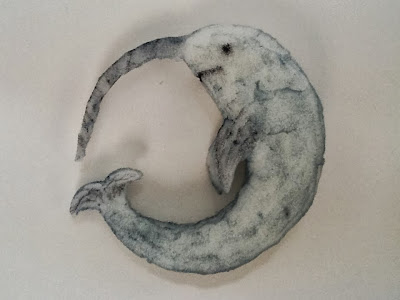 He is ready to jump into his envelope and swim through the U.S. postal system. 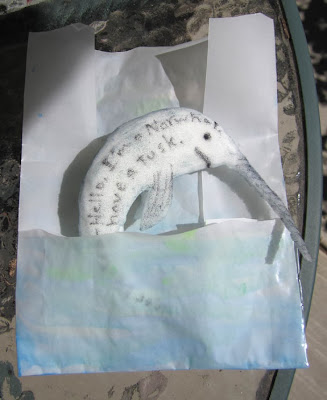 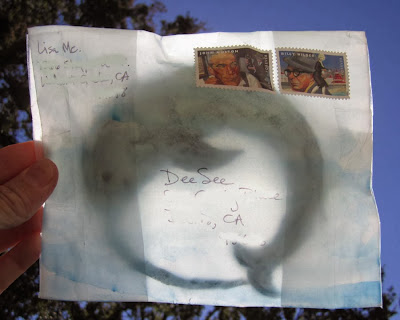 Origami—it was wrapped in clear plastic, so when opened, it would somewhat "burst forth." 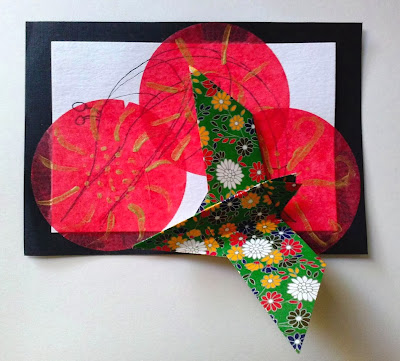 These are some paper dolls that Dee See kindly cut out and dressed once received. Characters based on our creative-writing project. 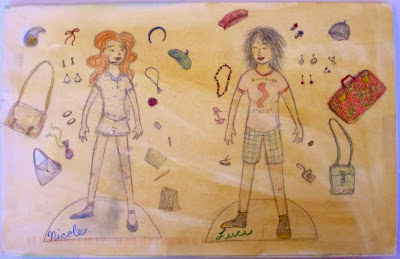 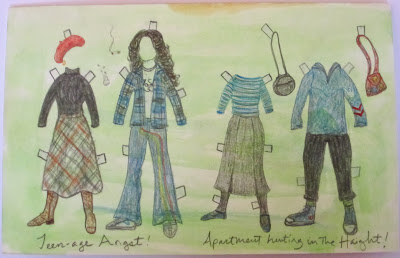 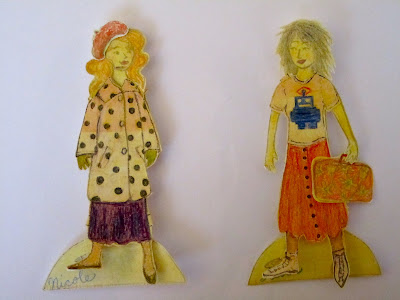 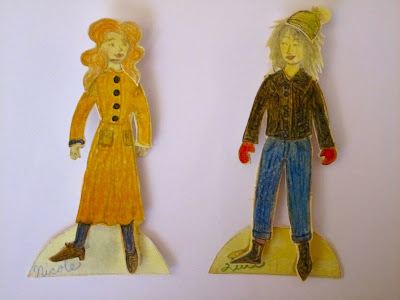 Some sun prints with old eyeglasses and jewelry. Character-based. I could do these all day.

Thanks to Dee See for the inspiration, steady flow of fabulous mail art, and photography of my work. I don't always remember to record what I make because I'm so excited to mail it off. There's something about art that has a destination...
Posted by Miss Lisa at 9:37 PM No comments:

Email ThisBlogThis!Share to TwitterShare to FacebookShare to Pinterest
Labels: art for what ails ya