Greetings from my new home in Vancouver, WA. Up until two months ago, I didn't know Vancouver, WA even existed and now I'm sitting in my new office/guest room here, finally updating the blog. It's a heady experience (sitting here, not the updating). I've been to Vancouver, B.C. many times so I know this copy-cat city name is confusing (personally, I think the state of Washington should have considered naming the town Columbia, since it's on the Columbia River and "Columbia" has a poetic ring to it, does it not?).

So we've gone and relocated and it's sad to leave the wonders (and friends and family) of Oakland, Calif. but it's damn nice here, if a bit more suburban than I've been used to in the past 20 years. Without going into incredible detail (because I'm tired of moving and just plain tired), I find this place very reminicent of my childhood suburb of Concord, CA. Not the Concord of today, but the Concord of almost 40 years ago. This town is now becoming way over-developed but it's still very beautiful in many places; it really is along a river and Portland is a short bridge away. That's right: tax-free shopping right across the water. And as many know, Portland is a unique and wondrous place.

So we're close to the ocean, the mountains, the rivers and waterfalls, and micro-breweries, parks, playgrounds and an awesome school district. I'm sure I'll find something to grumble about but for now, enjoy this pictorial array from the City of Vancouver website and The Columbian newspaper. I'll be taking some photos of all the run-down decrepit stuff that I've discovered, because that's my personal aesthetic. Until then, enjoy the friendly, laid-back, majestic sights of Vancouver (U.S.A.). 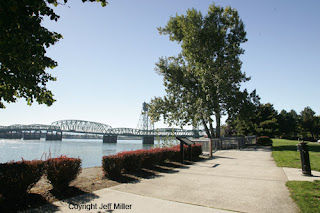 Our tour begins along the Columbia River. That's the I-5 drawbridge to Portland. 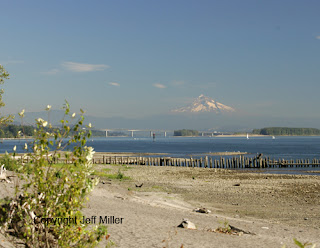 Here's a beach along the river with Mt. Hood, ever-present in the background. 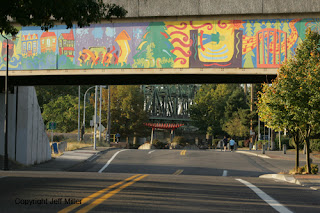 Nice mural on the railroad bridge. Vancouver sports many planes, trains and automobiles (and recreational boats). 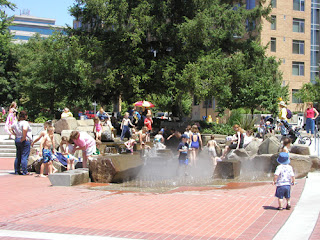 The fountain at downtown Esther Short Park. There are kids here like you wouldn't believe. We've gone to three parks in one week and they're crawling with kids. Today a couple of kids rang our doorbell and played with Jackson all afternoon until their worried-sick mother came looking for them. They had forgotten to tell her where they would be. That's kid-like! 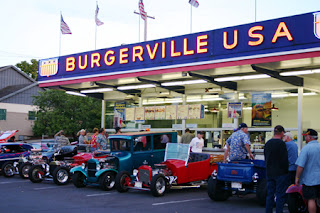 Hungry? How about some grain-fed beef burgers from Burgerville? Enjoy the seasonal milkshakes; this summer it's Oregon blackberry. Fall will feature pumpkin. We still haven't gone to to Burgerville but they're giving away 2,000 free cheese-burgers tomorrow at Esther Short Park for Vancouver's 150th birthday celebration, so maybe we'll wait in line. Scheduled to perform: Squish--a local all-kid rock band. 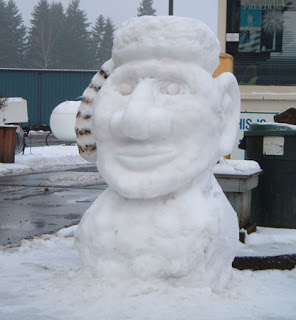 It does snow here a little bit. I own a hat with ear-flaps, so I'm looking forward to wearing that without getting laughed at, like I did in Oakland. 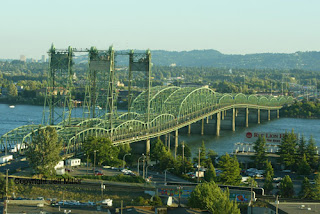 Oh hell, I'm going to Portland for some tax-free shopping, Powell's Books, micro-brew and an overwhelming population of indie-rock bands, the likes I haven't seen since 1983 in San Francisco. If I can just stay awake past 11 p.m....cannot manage it...night-night.
Posted by Miss Lisa at 11:18 PM 2 comments:

Come move with me!

Moving is a blast--don't ever let anyone tell you differently. Here's a journal entry I made a few nights ago. Note my organizational skills and grace under pressure:

After missing my exit, trying to get Keith to the airport on time, after packing everything we own over the course of three weeks and after nearly running out of gas on the freeway by the airport and after finding a discount gas station in the middle of nowhere-Oakland 980/880 hinterlands and after getting aggressively panhandled at said gas station and after getting home and realizing I'd lost my house key and couldn't find it anywhere in the rental car or in my purse, and after getting a call from Keith, whose flight was delayed and after he listened to near-panic-and-emotional-wreck Jackson and me tell him about the lost key; Keith suggested we search our 3-cubic-yard-long-and-wide garbage pile in the front yard because I had completely forgotten that I had taken a pan out there to dump before we had left for the airport. Maybe the key had fallen out of my hand there.

And there were my house keys, sitting on top of a pile of garbage, right in front of our house.

Finally, as Jackson was settled in bed and asking me what if we hadn't found them there, and I said, "I'm not going to worry about that. I'm just happy it's all right now."

Then Jackson smiled and said, "I think we had kind of a confused night!"

Then we both cracked up until we were teary eyed.

Epilogue: I was very careful with my keys from then on (until next time). Waste Management negotiated an end to the 3-week-long garbage lock-out and picked up our entire pile of garbage. The movers were able to enter the house the next morning and get all our stuff. Jackson now sees me as more human, and less of a god (that was going to happen soon anyway). And Keith continues to be a genius.
Posted by Miss Lisa at 9:56 AM No comments:

I've been thinking about housing lately, mainly because we went and bought a house (more on that later). I read Winifred Gallagher's House Thinking and really enjoyed her room-by-room history and meditation on shelter; its beginnings and ongoing role in our lives. Heady! Here's some Web sites she lists in the back of the book.

Greatest Buildings of the 20th Century (one woman's opinion)

Sea Ranch (known for its successful blending into the geography)

Levittown (the house as American Dream)

Atlas of Sacred Sites Around the World

We're leaving Oakland for other greenery. It's sad and difficult to leave friends and family but it's also a good time to start over. Oakland has so much potential for greatness but it's also a very difficult place to live. There was a garbage lock-out this month, resulting in much...garbage. A journalist was just gunned down in the street yesterday and seven Black Muslims were arrested in connection to the crime. I can't walk by the art center near my old neighborhood and not think about the woman who was nearly burned to death there one night. I wonder how she's doing. There are well over a hundred liquor stores in Oakland and not enough police and a lot of good will but not a lot of solutions. Great weather though. We'll miss the weather. We'll miss all the people but we'll come visit. One thing Oakland doesn't lack and that's character. I'll always remember the mix of cultures, the food and the music. These are what make Oakland special and great. I'm getting all sappy. Thinking about home does that to me.
Posted by Miss Lisa at 11:01 PM 2 comments: