In times of political and social strife, spread the word with Dadaist memes. What is Dada? A movement born of furious absurdity. And what better way to describe our current federal government? Lurking on Facebook the other day, I saw a political discussion between two friends on opposite ends of the political spectrum. The rude right-wing asshat (not that I'm biased) told his worried buddy that, "It's Trump's time," and therefore, we snowflakes should just shut up and deal.

I was struck by the poetic absurdity of the concept of "Trump's Time." Is it? Trump's time, that is. What does that mean? Because right now really sucks for so many people for so many reasons, all having to do with Trump and his awful cronies. If it's Trump's time, then we need some memes to officially point that out. We need some absurd visuals. Where to find them...hmmm...where indeed. 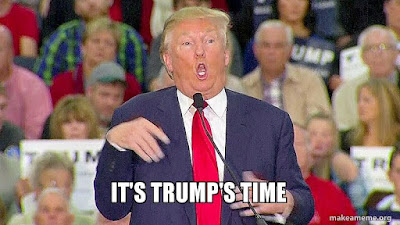 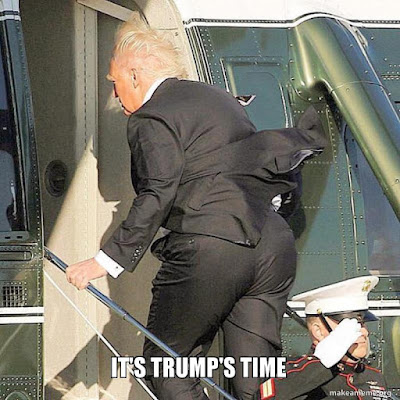 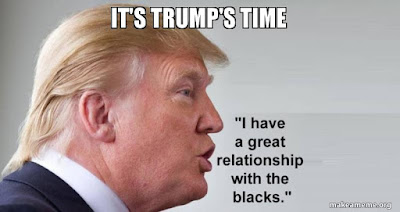 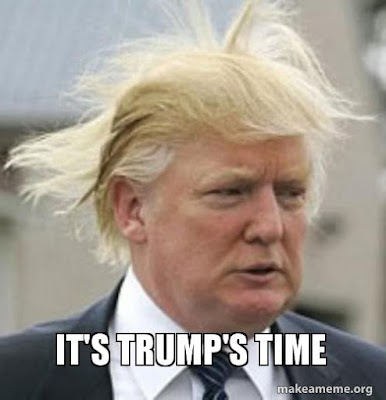 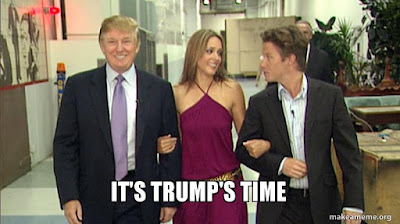 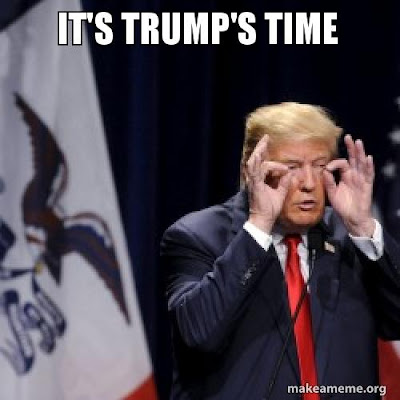 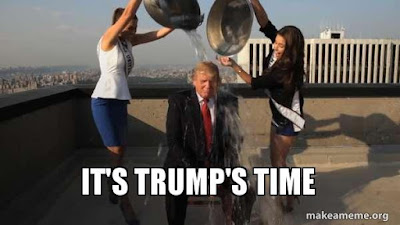 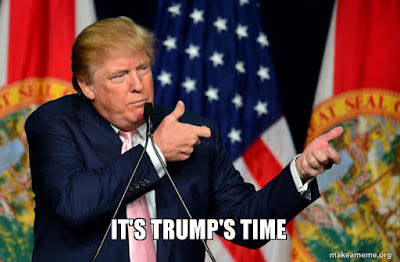 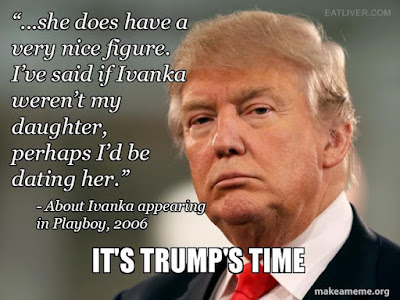 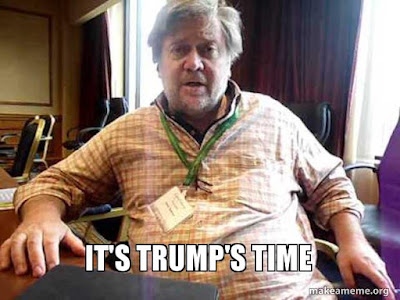 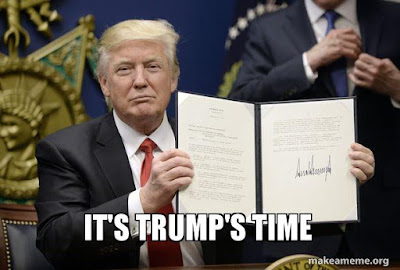 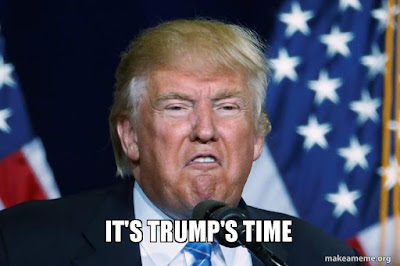 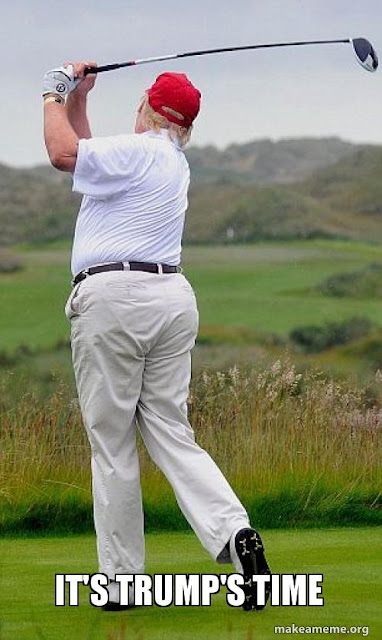 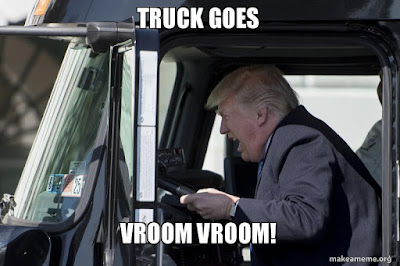 Yecch (as they say at Mad Magazine). That was an unhealthy use of my time. But now it's done and we can move on to more furious mockery and artistic acumen. Soundtrack: "Da Da Da" by Trio.

The Royal Family, oooops, I mean the First Family has been gallivanting around the White House (and Florida) for a month now. And you know what that means: makeover time! Something classy, to match the family in question. I thought the timeless billionaire-look-from-the-80s is long overdue for a comeback. As a patriotic American, I offer my style tips, gratis. Remember: we get the leaders we deserve, but also—they get the citizens they deserve, so keep those calls, cards and letters coming to your elected officials. We're all in this together. 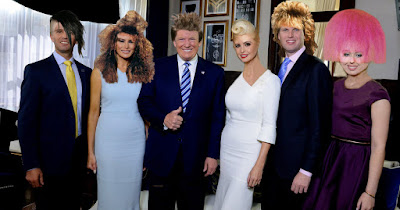 Songs with spelling in the chorus

With ubiquitous spell-check options, tiny keyboards, communication doled out by our bulky thumbs, and a public-educational system in constant flux, I'm concerned that our ability to spell is falling by the wayside. Case in point: I just had to look up how to spell "ubiquitous." I hope next time to get it right the first time.

Will songs that spell out their choruses help? I don't know—couldn't hurt. Let's celebrate spelling in song, spelling the lyrics out the R-E-S-P-E-C-T-take-care-of-TCB way.


Bo Diddley - "I'm a Man." Who is the man? Bo Diddley is the man. He spells it out succinctly right here. The originator of seriously rhythmic rhythm guitar, he influenced an untold legion of rock n rollers, especially mop-topped 60s-era British fellows who needed a healthy outlet for their pent-up class angst. The Rolling Stones revere him, as should we all.

Bay City Rollers - "S-A-T-U-R-D-A-Y NIGHT!" I'm sorry but no one gets out of here without some bubble-gum rock by Bay City Rollers. Partly because this was a huge hit that hugely featured spelling in its chorus. But also because when I was ten and taking piano lessons from our opera-fan neighbor, Mr. Nicholson, I went out and bought the sheet music to this song and made Mr. Nicholson listen to my solo-piano efforts with it. He was very patient with me but we soon parted ways after I followed up with Sweet's "Fox on the Run." That was pushing it with Mr. Nicholson.

Tammy Wynette - "D-I-V-O-R-C-E." To protect the kids from the emotional onslaught of a marital split-up, Wynette spells out the word. A very sad use of spelling.

Patti Smith - "Gloria." I'm featuring Smith's version here because she builds a mighty momentum before unleashing her spelling power. It isn't just about Gloria; it's about the spelling of her name, as part of some goddess ritual of pagan dimensions. At least that's how I see it. Them's "Gloria" is great in the earthy sense, as in "Hey, did ya hear? Van Morrison's got an awesome girlfriend and her name is Gloria."

The Cure - "Fire in Cairo." Young prodigy Robert Smith had the urge to spell and it works in great new-wave literary cheerleader fashion. The best musical geniuses mash all their influences and elements together and with careful editing and taste, create something new. I love his nervous, catchy guitar-work here too.

Cameo - "Word Up." The 80s were the golden age of pop-music spelling. Technically this is more like spelling out the bridge of the song, and it's a late-arriving bridge but a crucial one. Just when Cameo runs out of praises for the phrase, "Word Up," the chorus saves the day, chanting "W-O-R-D Up!" A good time is had by all.

Pixies - "Velouria." My theory of Pixies has altered over time. Studying their early releases, the art, the sound, the liner notes, I concluded that they were a band fronted by a genius guy who called himself Black Francis, with Kim Deal adding nuanced, fresh vocals and bass lines that resulted in elevating his songs to a higher level. That would make her the assistant genius. Over time and many listens to her discography, and after reading various biographies and interviews with Deal, I've come to realize that she was the innovative musical prodigy and genius, and Frank Black was therefore Pixies' assistant genius, who grabbed that genius mantle for himself, early on and often (my emphasis). And this led to tensions within the band, as you can imagine.

I will not post my findings here, but all you have to do is listen to every Pixies album in their release order to notice how Deal's haunting, melodic voice is, over time, shoved into the deep, deep background before disappearing completely in the mix, leaving us with some undistinguished Frank Black material. I'm not down on Frank Black material per se and perhaps Deal stepped aside at some point and wasn't always present for rehearsals and recording sessions. But if you accidentally find yourself in a newly formed band and the bass player alongside you turns out to be a musical genius, here's what I recommend: you step aside and let her do her thing. You contribute too, of course, but she's the innovator in the pure sense. Recognize and abide by that. You'll save your band and our ears.

Also, being in a band is hard—like a marriage but with multiple partners and little-to-no makeup sex to make the arguments go away. Anyway, she spells out the chorus here, and shortly thereafter, they broke up.

Take a break from our excessively distressing news cycle by taking a ride through the Transbay Tube with these fine BART dancers. There will be turfing and bone breaking and other fine self-taught choreographed moves. I shot this footage while on the way to the massive SFO immigration-ban protest, so I had my "good" camera. Jackson put it up on his transit channel. And here we go.


Hoping to see some lady dancers someday soon. Hoping I have my camera ready.
Posted by Miss Lisa at 1:42 PM No comments:

I marched on down (BART'd on down, actually) to San Francisco International Airport on Sunday the 29th, for the second day of protesting of our big-baby bossman's insane, gutless, confusing and Constitutionally illegal immigration ban. I had my video- and still-cameras in tow and I went alone with no signage or motive other than to capture the day's events. I'm so glad I did. It was a wondrous occurrence, completely organic and happening in the moment.

I filmed my journey throughout the long, cavernous International Terminal, filled to capacity with demonstrators, musicians, dancers, sign-makers and impromptu free-snack-bar volunteers (with donated snacks, sandwiches and water). My heart filled with gratitude and wonder at the kindness, passion and focus on display.

Since then, I've been recommending these videos to my friends who are fatigued and fighting despair on a daily basis since Trump started signing his ridiculous and dangerous dictatorial edicts. Currently it looks like a coup is taking place within our Federal government. I'm hoping the Democrats will rise to the occasion but they've been noble and polite (and in many cases complicit and lazy) for so long. Is it too little too late? This has happened before across the world. Are we equipped to deal with amoral sociopaths who use loopholes to get their way throughout their careers?

I cite our shameful history when the Federal and State governments were complicit in incarcerating thousands of legal citizens of Japanese ancestry to bleak internment camps in the California deserts during World War II, at a moment when we should have, as a nation, stood up and protested.

This is no different. This is a religious ban that goes directly against the First Amendment and will not lead to our safety. This is an arbitrary list drafted to appease the far right, that doesn't include a single Muslim-majority country that's housed a terrorist who's targeted our country. It's also a list of seven countries that the corrupt fear-monger in office has no financial ties with, unlike Saudi Arabia, where he has business interests—Saudi Arabia is not on the list.

I hope these images and sounds will raise your spirits.


Anyone involved with this marvelous band, please get in touch with me so I can credit them. They were fabulous musically and riveting to watch. The "extended-cut" version follows the length of the concourse from the BART entrance to the end and back again. Two marching-band performances, lots of chanting, Sufi dancer, lovely humanity. Rated: very uplifting.


Some images from the day. It's surreal and amazing to protest in a huge international airport while police stand gamely by, cordoning off the domestic terminal and letting the people have their say. SFO airport personnel were polite. They smiled as they answered my questions about the day's events. According to The East Bay Times, five travelers entering the U.S. had been detained this weekend and the last one was released from the airport on Sunday afternoon.

The presidential order was signed on Friday and TSA officials weren't clear on how to enforce this hastily drafted shock-tactic document. We need to get it together and fast. Our standing as, "Land of the free, home of the brave," is quickly heading toward, "Land of chaos, home of the corrupt." 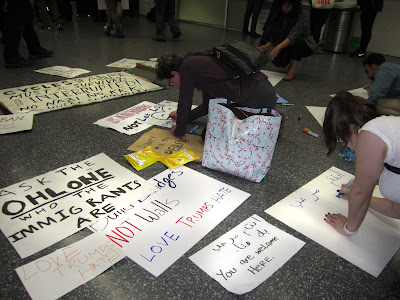 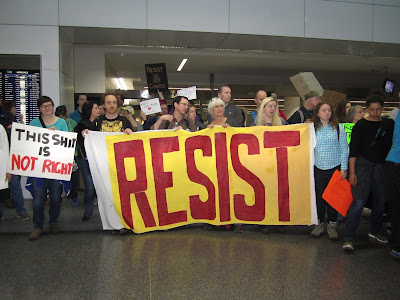 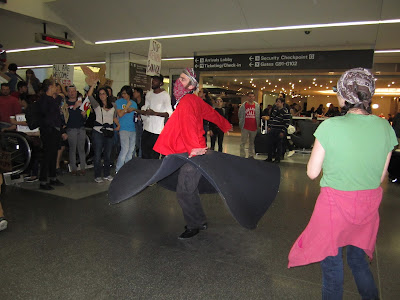 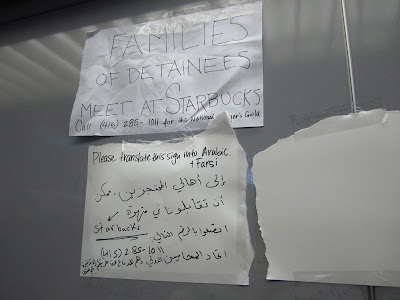 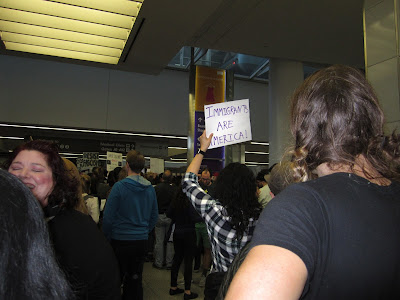 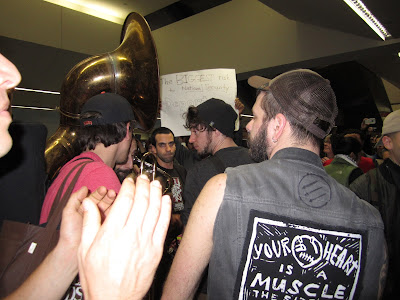 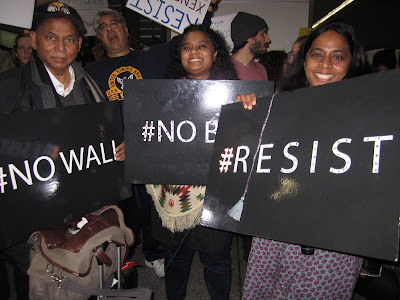 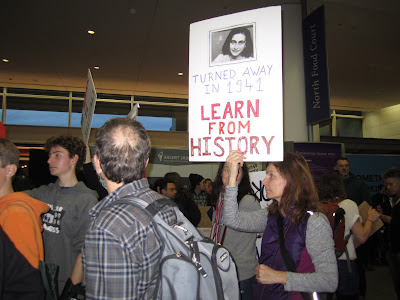 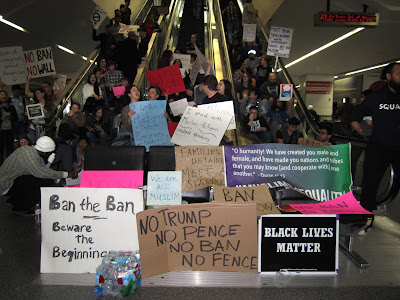 
"In a 19-page complaint, Ferguson alleged Trump’s executive order violates constitutional guarantees of religious freedom and equal protection. The state of Minnesota has joined as a plaintiff, while attorneys general in several other states have also taken legal action against the controversial ban.

Ferguson’s lawsuit includes quotes by Trump during his presidential campaign, including his original pledge for “a total and complete shutdown of Muslims entering the United States.” The lawsuit alleges are evidence that the order was “motivated by animus and a desire to harm a particular group.” - (Jim Brunner, Jessica Lee and David Gutman)


In a unanimous, 29-page opinion, three judges on the U.S. Court of Appeals for the 9th Circuit flatly rejected Trump’s claim that his travel ban should be resumed immediately because of national security -- and that a president’s decisions about national security cannot be reviewed by the courts.

Trump’s almost immediate response was to tweet: “SEE YOU IN COURT, THE SECURITY OF OUR NATION IS AT STAKE!”

As usual, it’s not clear whether Trump is a knave or a fool.

2. Trump doesn’t seem to understand the appeals court decision. It wasn’t that Trump isn’t allowed to keep the nation secure. Of course he is. The Constitution gives a president that power as commander-in-chief. It’s that he can’t do it immediately, without a thorough judicial review of whether he’s also trampling on other constitutional rights – such as the First Amendment’s ban on establishing a religion or prohibiting its free exercise.

I include this meme, which might come in handy over the next few years. Use it freely.