Musical Instruments Made From Weapons by Pedro Reyes

Artist Pedro Reyes turned revolvers, shotguns and automatic weapons into instruments and then the weapon orchestra played a concert. Suck on this, NRA.

A gallery of weapon instruments and more videos are on the designboom site, via Music for Maniacs!!
Posted by Miss Lisa at 3:20 PM No comments:

Email ThisBlogThis!Share to TwitterShare to FacebookShare to Pinterest
Labels: art for what ails ya, cool guys, link-tastic, the music is the message

"We think it is poor form for a politician or a special interest group to try to push a legislative agenda on the back of any tragedy."
-- NRA, after 2008 Northern Illinois shootings

"Now is not the time to debate politics or discuss policy."
-- NRA, after 2009 Binghampton massacre

"At this time, anything other than prayers for the victims and their families would be inappropriate."
-- NRA, after 2011 shooting spree that wounded Gabrielle Giffords

"There will be an appropriate time down the road to engage in political and policy discussions."
-- NRA, after 2012 Aurora massacre

Update from the December 21 press conference:

“Nobody has addressed the most important pressing and immediate question we face: How do we protect our children right now, starting today, in a way that we know works? The only way to answer that question is to face the truth: Politicians passed laws for gun free school zones, they issued press releases bragging about them, they posted signs advertising them. And in doing so they tell every insane killer in America that schools are the safest place to inflict maximum mayhem with minimum risk. How have our nation’s priorities gotten so out of order?” - Wayne LaPierre, NRA CEO


LaPierre must own a few guns. How chilling an image is that?
Posted by Miss Lisa at 9:38 AM No comments:


I Walk Like Jayne Mansfield/I'm Blue (The Gong Gong Song)

Email ThisBlogThis!Share to TwitterShare to FacebookShare to Pinterest
Labels: cool girls, haiku, the mooovies, the music is the message

Get this Gollum off our back 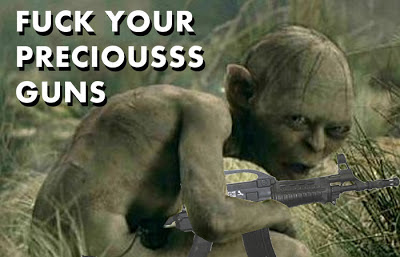 You can wear all the skinny jeans you want, grow facial hair down the front of your neck and pose away, chain smoking your lung cells into tar-encrusted oblivion, but you CAN'T STOP CHRISTMAS. It arrives every year and there's no avoiding its sentimental, consumer frenzy of a religious traditional parade-route Santa Claus and birth of Jesus celebration. It's bigger than all of us put together and all the irony, detachment and smug self-destructive behavior won't save you from its red-mittened grasp.

But don't worry. I'm here to help. I was once young and detached too. How can you make Christmas more bearable, more relatable, more cool? You can't. But you can fortify yourself with supplies. Hip supplies that cost money that make you seem cool at Christmas. And isn't impressing your peer group with the right material goods what it's all about? Of course it is!

After you've watched Bad Santa for the umpteenth time, it's time to go Christmas shopping! Yes, if you grew up in a Christian household, you can't avoid it. Sorry! Purchasing gifts is the unavoidable Christmas spirit, but have it YOUR WAY.

Your niece likes dolls but dolls are so 19th century! Well, just go with it and buy her a Monster High Robecca Steam (Punk) Doll

. Start her on the road to expensive in-group hobbyism early.


Someone you know just had a baby. The birth of a baby is the beginning of the end of cool detachment. Nothing says "involved" like diapers and spit-up. Just get the baby this garbage truck plushy (on clearance!) and be glad someone else is willing to carry on the human experiment.


What about Mom and Dad? They made you a lot of meals over the years and maybe even pay your rent now. You owe them. How about a Jesus toaster, in keeping with the season.

Now that shopping's out of the way, it's time to decorate! Better grab that overpriced Hammacher Schlemmer aluminum tree before they're all sold out. The vintage dealers' trees are long gone by now. You gotta be in it to win it when it comes to mid-century holiday design.


It's time to hang your gambling, alcohol, and smoking ornaments. That's the spirit(s)! 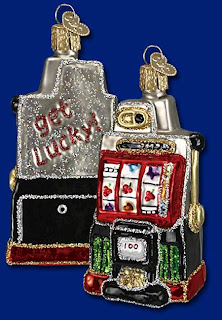 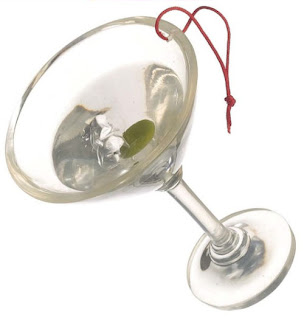 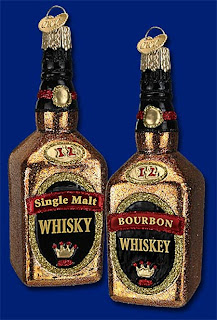 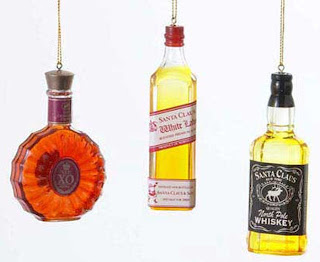 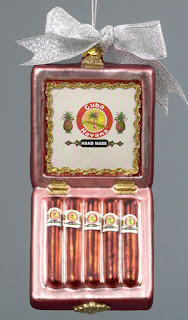 Speaking of spirits, why not imbibe in a traditional Christmas beverage? The problem is they're so frothy, sweet and soul-warming. Blech! You can try to update eggnog by making it a smoothie, but it smacks of too much effort.


Just give in and drink your Christmas beverage out of an obnoxious mug. Here's a few to get you started. Nothing balances out the sweetness of a creamy cup of hot peppermint cocoa like a butt mug 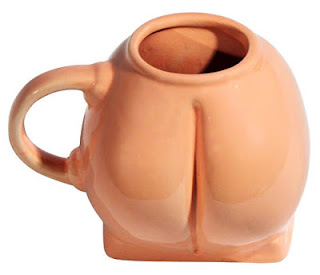 Or sip your nutmeg-topped nog out of this toilet mug

. Makes an excellent potpourri dish as well for year-round enjoyment! 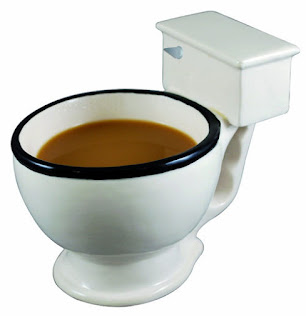 . Show you care about the environment while you get your socially acceptable buzz on. 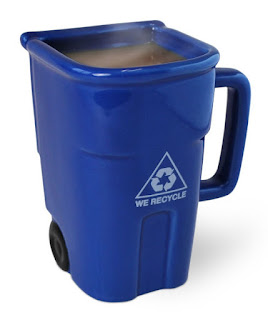 Thanks to Continental Wig Boutique's window display in downtown San Rafael, I don't have to put together an elaborate Christmas card this year. I've got my cards done, right here, right now. Why stage a family photo at a picturesque location with the wind and the sun in your eyes? The squabbling siblings! Having to ask a stranger to take your photo, hoping it comes out, then the printing costs. Only so that Aunt Edna in Des Moines can toss your visage aside in order to work on her fifth buttered rum for the night!

Nope, I'm going in a different direction this year and that direction is wig displays. Happy holidays! Buy some wigs! 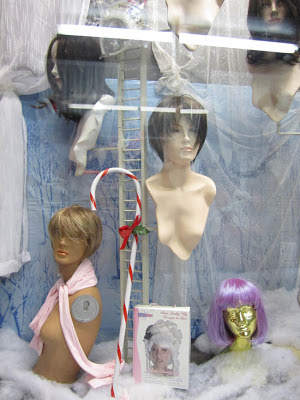 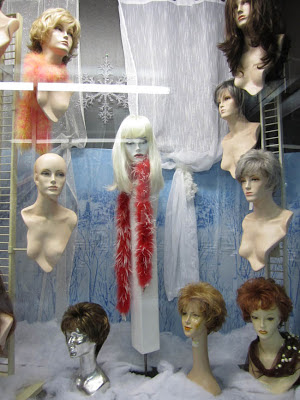 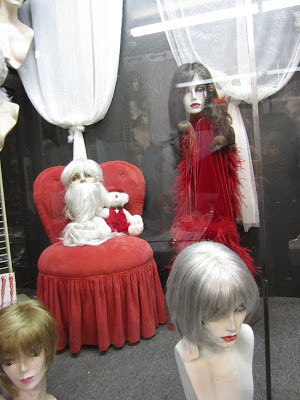 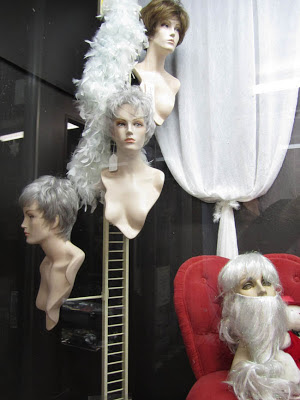 There's a new 15-minute documentary on Bruce Mertz—Concord, California's Mr. Christmas. Every year for decades, Mertz has designed an electrical Christmas wonderland at his home on Olive Drive. Concord happens to be my home town and I admit, I've never seen Mr. Mertz' creative output before. Now that he's in a movie, I better high-tail it over there before he's swamped with paparazzi.

You can buy the film on director Nick Palmer's Mr. Christmas site, or go directly to the Mertz household at 5208 Olive Drive to purchase the movie. At ten bucks a DVD, I say: excellent stocking stuffer! This is the inspiration I need to hang our four strands of lights across the garage and entryway. It won't compare to the 50,000+ lights at the Mertz household, but I'm just doing my part. Every bit helps in the War on Christmas.


Update: Mr. Christmas is now on Vimeo as a staff pick. Sweet movie.
Posted by Miss Lisa at 11:32 AM No comments:

Over the years I've inadvertently collected (a total of three) tiny adorable monochromatic creatures. Each has a story to tell. Let's tell those stories through portraiture. I'm unemployed. You can tell.

The tiny creatures on a pencil to get a sense of scale. 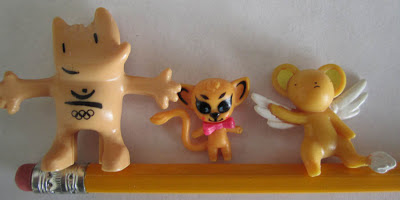 Their colors remind me of the Crayola crayon that used to be called "flesh." The flesh-colored crayon was retired when enough people informed Crayola that the world is not made of one flesh tone. Crayola, to their credit, did agree with this assessment and now that crayon is no more. Or it's called caucasian or light beige or something. Crayola now makes a box of skin-tones called Multicultural Crayons (which also come in the awkwardly titled "Washable Multicultural") and so hooray for that. But these little creatures are of general tone and that tone is light beige.

Having a collection of light beige creatures is odd enough, but to have one consisting entirely of tiny beige creatures, one that was collected by accident—well, I don't know how that happened at all. All I know is they're super-cute and deserve some portraiture because the one unifying factor on the Internet is that cute things rule.

It could be argued that Cobi, the 1992 Olympic mascot from the Barcelona Games, is not all that cute. But compared to most Olympic mascots, he's positively squeezable in adorableness. He's supposed to be a Picasso-inspired Catalan sheepdog—definitely the first animal you think of when you comes to exceptional athletic ability. Or close. With his pudgy tummy, "love me" stance and asymmetrical features, he is a vision all right.

I got this Cobi (on purpose) in Spain in a package with a whistle pop (a lollipop that could also be used as a whistle) that was supposed to launch a plastic disc when blown The package ad type commanded you to "Lanza el disco con Cobi!" Doesn't that sound fun? Unfortunately, I kept everything in the package, hung on my kitchen wall, to the delight of my roommates I'm sure, and eventually a troupe of ants came and attacked the whistle pop with gusto. Everything had to be tossed except for Cobi himself. He's a survivor.

I chose to pose him with an dancing pack of cigarettes because I think he comes from a smoker's household. Also, he's definitely a presenter at heart. 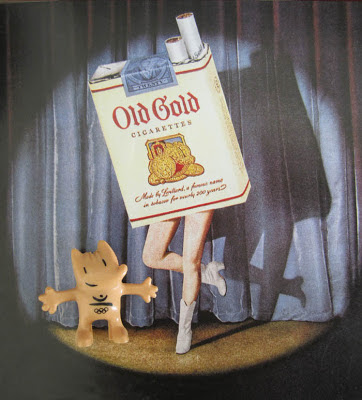 Let's move in for his close-up.


Next is a teeny-tiny circus lion that I've had since I was teeny tiny. Part of the Liddle Kiddles Zoolery Doll line, I think I got this when I was six or seven. It comes with a purple train car cage and tiny pink bow tie. I'm too lazy to go upstairs and get the cage, but be assured it has pink wheels that really roll. The little kitty is just too, too adorable with his or her oversized head and removable bow tie. That's right—removable. Plastic toys used to have details until they were all deemed a choking hazard and now resemble ostrich eggs.

Tiny kitty would definitely be fond of pineapple juice.

Are you ready for this? Close-up!

Most mysterious of the tiny creatures is this little manga mascot that came with a school-girl doll, given to me by my friend Joy several years ago. The doll is really cute too but she's in a box somewhere. This little creature has wings and something lumpy stuck to his or her foot. This creature appears to be some kind of marmot or baby-bear guardian, or who knows? All I know is—IT'S CUTE.

Close-up (it's cute round head barely fit under the microscope camera):

But what is that thing on its foot? Help me out, Internet. 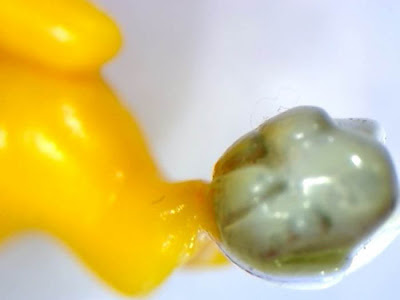 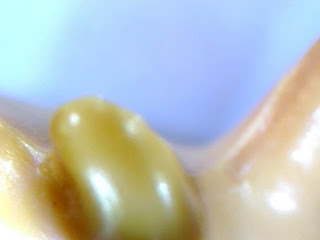 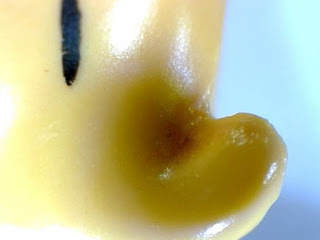