I Am Thankful For... 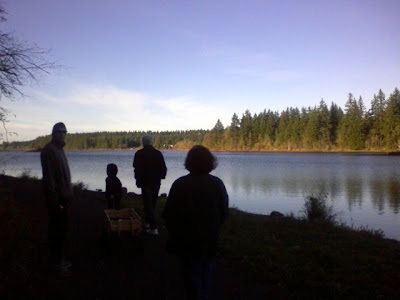 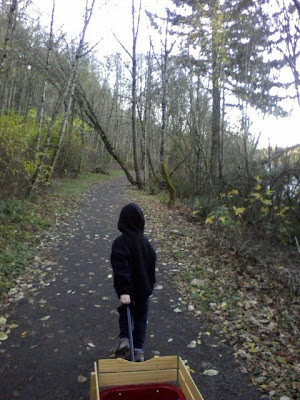 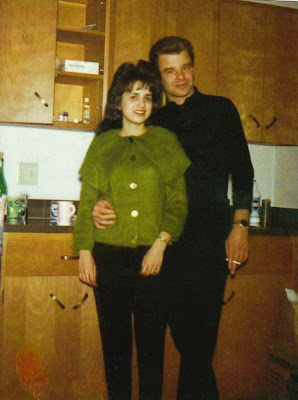 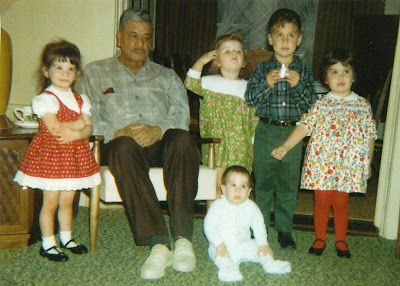 ...that survived the 70s, mostly intact. 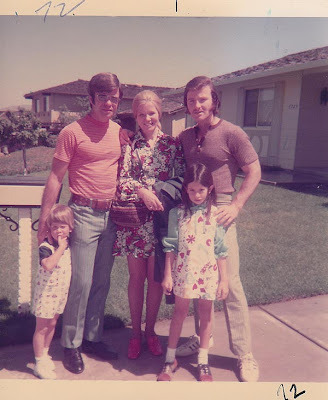 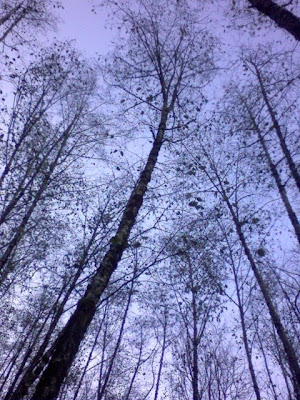 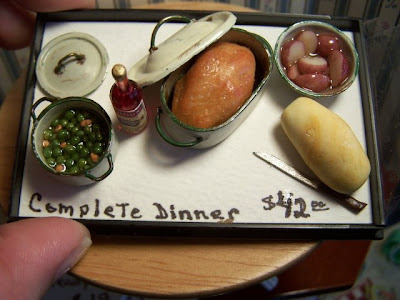 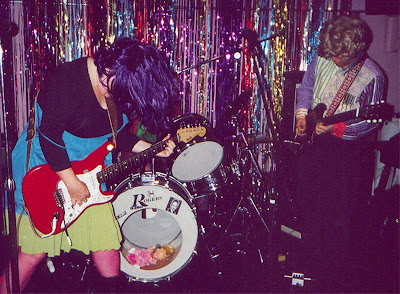 ...our new First Family. Thank you for being intelligent, pragmatic and thoughtful! 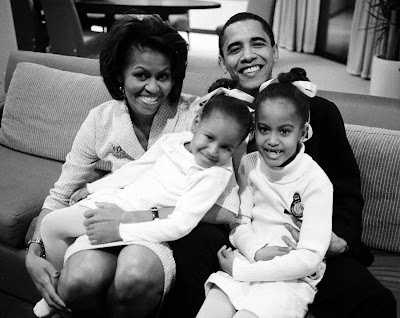 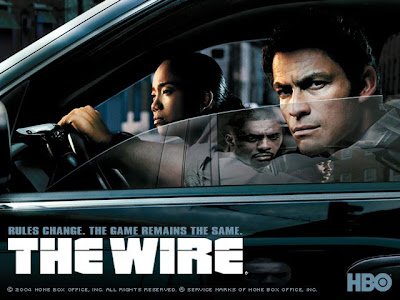 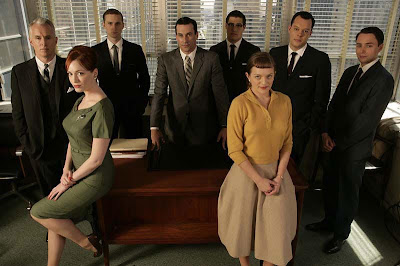 This week, Betty James, the co-founder of Slinky, died at age 90. She and her husband, Richard, started James Industries, which eventually created the beloved toy that walks down stairs, alone or in pairs, and makes a slinkety sound. Richard would leave his wife and six children to join a cult in Boliva, but Betty carried on; a single mother, running a company that would eventually sell, according to her obituary, hundreds of millions of Slinkys. Hail, Betty James and the Slinky--a spring, a spring, a marvelous thing.

Slinky, 1960s - The classic that made you want a two-story house so you could walk your Slinky down the stairs.


source: SFGate
Posted by Miss Lisa at 7:00 AM No comments:

People are still so enamored by the classic Guns N' Roses sound, that Mr. Brownstone, a GNR cover band made up of members of Clap Your Hands Say Yeah, Boss Tweed, and Takka Takka, appeared on David Letterman last week. Sure, why not?


And in related news, Axl Rose's 13-year project, "Chinese Democracy" was released yesterday (but only on MySpace and at Best Buy, its only distributor). The band on the CD is listed as Guns N' Roses, but accept no imposters. There's only one Guns N' Roses (see cover band above).

-PopDose reviewed "Chinese Democracy." Big thumb's down.
-The Seattle Times review: Not worth it.
-Rolling Stone claims, "It rocks!"
-Chuck Klosterman says that Axl did a good thing here.

This heavy-metal moment was originally sourced from the Urban Outfitters Blog.
Posted by Miss Lisa at 7:00 AM No comments:

I managed to snag two issues of "Bust" from my local library this week. They're ALWAYS checked out. June/July '08 with Amy Sedaris on the cover had a very informative and timely article by Callie Watts on female hip-hop acts. The last time I listened to women rappers was about 4,000 years ago (not counting M.I.A., recently). Here are three lady MCs from the article. To read more, check out the magazine section of your library and hope for the best.

DJ Blaqstarr & Rye Rye - Shake it to the Ground. Out of Baltimore comes 17-year-old Rye Rye (unless she's had a birthday since last summer). Much more uplifting than the fourth season of Baltimore-based "The Wire," which I just finished watching last night (sob). Rye Rye is a dancer--you can tell. She just toured with M.I.A. which makes her the coolest teen-ager in recent pop history.


Kid Sister - Pro Nails, featuring Kanye West. OMG--this is the best idea for a music video ever. I could look at custom nails all day. From Chicago it comes.


Yo Majesty - Club Action. Christian lesbians from Tampa, Florida. This is badass with lots of swear words and techno beats interspersed throughout. Not your typical Christian music.


Bust blog
Posted by Miss Lisa at 7:00 AM No comments:

Email ThisBlogThis!Share to TwitterShare to FacebookShare to Pinterest
Labels: cool girls, dance little sister dance, the music is the message

"Spaced" for the easily amused

Being unemployed isn't all bad. I've had time to think about my life's direction, where I'm going, what I want to do with my time on Earth. And watch "Spaced," British' television's finest sitcom (along with "The Office").

I can't embed, but you can click and watch. Think of it as fulfilling your commitment to quality entertainment. Starring Simon Pegg and Jessica Stevenson as a acquaintances who pretend to be a married couple in order to meet the rental requirements of an affordable London flat. This is from season one, "Art." My favorite so far. 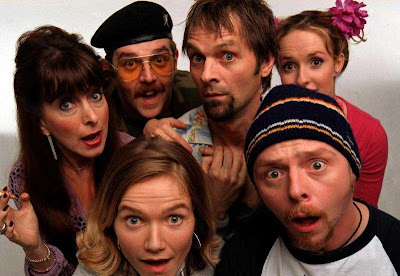 For playing the slacker so often, Simon Pegg is anything but unemployed.
Posted by Miss Lisa at 6:36 PM No comments:

Model Train at the Conservatory of Flowers - how much charm can we take?

Golden Gate Park visitors: head over to the Conservatory of Flowers to see a G-scale model train wind its way through the plant-life, passing by miniatures of San Francisco landmarks made entirely out of recycled materials. I'm not making this up! Photographic proof: 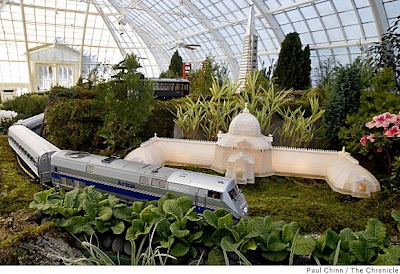 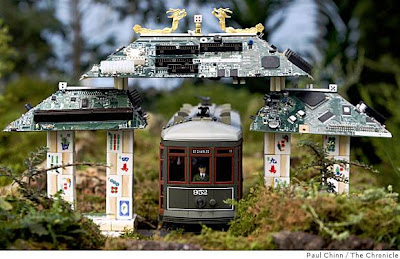 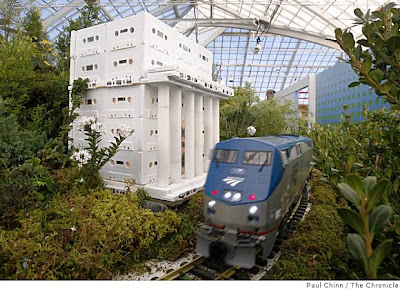 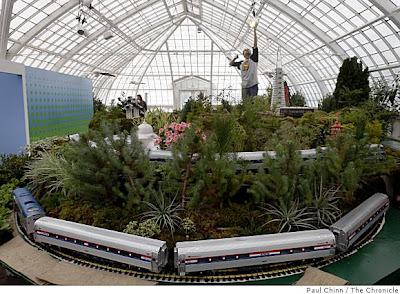 It's hard not to picture George Costanza's father yelling his famous mantra, "Serenity NOW!" when contemplating Joss Whedon's epic space adventure. And by epic, I mean the journey it took from being a prematurely cancelled television show that didn't last a season, to big-budget movie screendom (well, $40 mil.--not very big these days--you definitely see every penny on the screen).

And who was responsible for this amazing, unheard-of journey? Certainly tenacious visionary, Joss Whedon, and his financial backers, but also the fans. The fans rallied on the Internet and got Universal to sit up and take notice. Imagine a movie exec. slumped in his chair, suddenly bolting upright and saying, "HUH? Wha-?," then signing a big check made out to "Joss Whedon's Sci-fi Production."

The amazing journey: Buffy, Angel, Firefly (did you watch it on Fox? I always forgot when it was on, then it wasn't anymore), and finally the Firefly movie, "Serenity." I was a big Buffy/Angel fan. I'm a proud owner of an Angel action figure even with its disappointingly fragile and breakable sword. I'm not saying "Firefly" didn't deserve to be a successful series. There was obviously a fan base ready to commit to the concept of "Outer Space Western," but despite the support, the movie tanked in theaters, making just over half of its money back. It apparently did well when the DVD came out, but with an ensemble cast of (good-looking) unknowns, and a Han Solo-ish premise (outer space renegades, living on the fringes of a totalitarian planetary society), it wasn't able to draw the big crowds.

Ideally, monetary gross is not an indicator of quality. I had to think about whether or not I liked "Serenity" for a few days. I didn't mind its potentially confusing flashbacks and back-stories, and the cast plays a well-rounded group of archetypes with deadpan, smart-alecky Whedon dialogue throughout. But it's DARK. And violent. And INTENSE. This was a bit off-putting. What's with the impalement? Whedon has a thing for this that I never want to experience again. I don't like seeing psychotic cannibalism and impalement in the same movie. It's too much for me. I'm not a delicate flower, but there's some things I don't want to see (or hear) in the name of entertainment.

Otherwise, this is a sort of thinking-fan's sci-fi action film, with some weird, amusing old-timey dialogue (Whedon was obsessed with the Civil War when he created the series), and a main guy, Mal, who's a rebel and a loner. There's strong women characters, and some very balletic ultra-violence by willowy Summer Glau, who plays the psychic teen, River. A tiny, fighting-mad woman with special powers, impalement, endless imagination, scrappiness against all odds--you got your major Whedon themes and it's all happening in OUTER SPACE. What's not to like? And now:

Using my latent artistic abilities, I vowed to save this so-called dying art form by making and sending postcards, and here's what I managed to produce. I made two of these tonight because I was ashamed at my meager output, but that's OK. I'm on a production roll. Join me in my fight to save postcards. But you've gotta actually write something on them and send them out there in the world. Written communication is the life-blood of the postcard.

This one's chock-full of animal sex facts I got from "Discover" Magazine, the best science mag out there. I sent it to Tuckers, who was partaking in a project of his own called "dating."

This one was for my childhood puppet teacher, Bruce Chessé. The funny thing about postcards is you don't usually get a reply. I hope he liked it. 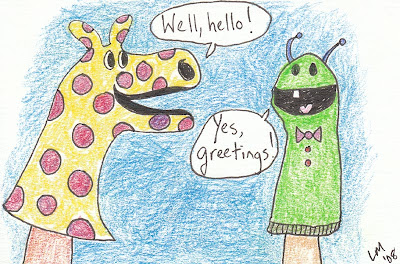 This one did get a reply. It was to my friend Susan in Minneapolis. She sent me a summer-vacation postcard right away, with a guy in the ocean with some little random texts all around him. It pays to send postcards to your artist friends. 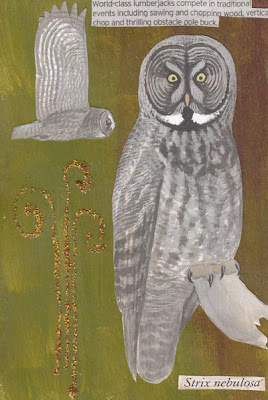 Do you have a friend going to grad school? That's a big deal! Celebrate the occasion with a timely note. 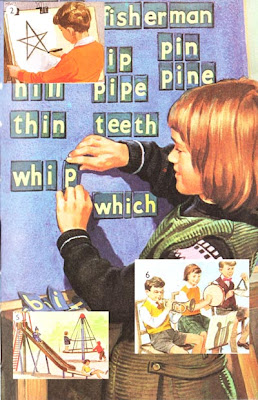 I made this one tonight. I might send it to my East-coast relatives, who watched in awe as my son sat on their front lawn for several hours, waiting for their garbage trucks to arrive. He got his cousins involved, and several neighbors as well. It was like a garbage-day parade. He drew this truck for a thank you note to our friend Francis, so this one did double-duty. That's recycling in action. 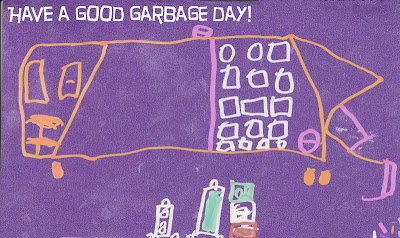 This one will go to Morningside May, who gave me the most delightful Tupperware cake-taker, and a lunch container for Jackson. We're passionate about food storage. 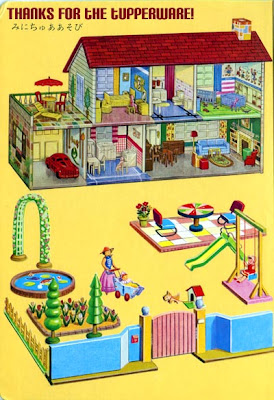 Doesn't Tyra Banks resemble the Eye of Sauron from Lord of the Rings? Do you see it? 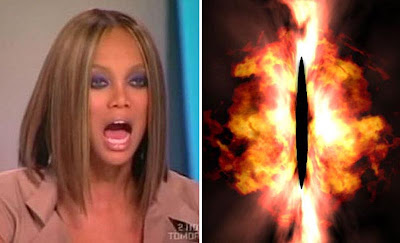 How about this angle? I emailed these to Rich at FourFour for his "America's Next Top Model" recap, but he didn't use them. They make lovely postcards though. Do you have friends who watch ANTM? Show them you care with a Tyra/Lord of Mordor comparison that's sure to please! 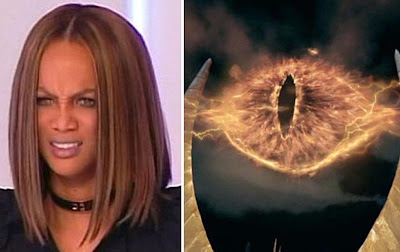 Segment from "How to Draw a Bunny" - a documentary about the late collage artist Ray Johnson, considered to be the founding father of mail art.

Email ThisBlogThis!Share to TwitterShare to FacebookShare to Pinterest
Labels: art for what ails ya

Last spring, artists Robin Hewlett and Ben Kinsley collaborated with the Google Maps Street View documentation car and dozens of city-wide volunteers to stage several entertaining tableaus along Pittsburgh's Sampsonia Way. So as of this month, when you go to Google Maps Street View along this particular Northside neighborhood, you might notice several scenarios: a parade, a garage-band rehearsal, someone escaping from an second-story window with knotted sheets, a seventeenth-century sword fight, a walking ham, or just people checking you out as you check out their street.

Here's the Google Street View camera car, heading down the street. The great thing about this set-up is that the confetti is permanently part of the street scene now. I've included links here to these select scenes [Update: Google has since, of course, gone through this neighborhood numerous times since this originally posted, so now you can compare and contrast these scenes with the current look of the street at the links. Sobering to see how the lack of artifice can affect a neighborhood]. 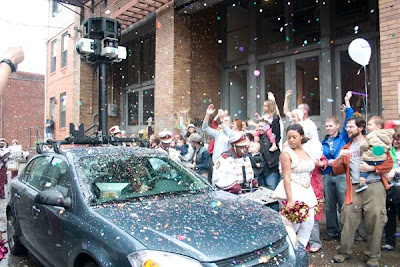 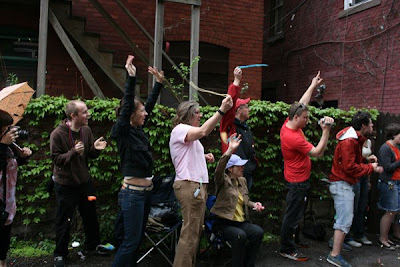 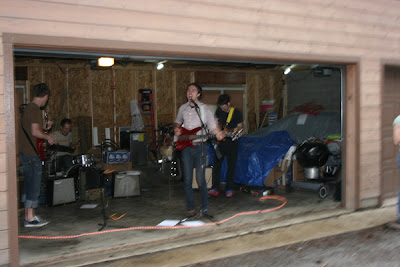 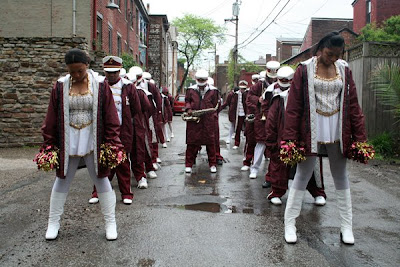 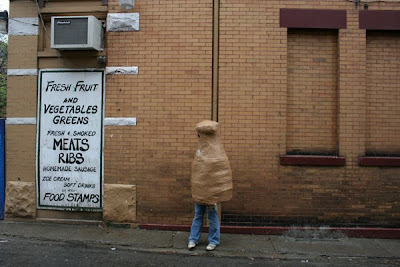 Email ThisBlogThis!Share to TwitterShare to FacebookShare to Pinterest
Labels: art for what ails ya, link-tastic, What the 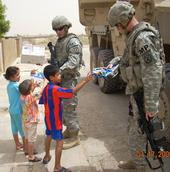 I didn't have anything lined up to blog about today but Blogger suggested I check out The One Minute Writer, so I did and I like it. Every day has a writing prompt and there's a timer in the upper right-hand corner so you can write for your minute. Gimmicky but sometimes gimmicks really help you get "unblocked." Do you like to write but never make the time? Write for one minute. Write for five minutes. Don't let your hands cramp up. Take a tea break. OK--back to writing.

Tuesday's prompt was Veteran: write about a war veteran you have known of, or known personally.

I'm going to start the timer and then write... (Timers make me nervous. OK--it's just an experiment.)

I've been thinking a lot about my little cousin Joe, Jr., who's stationed in Iraq. He's already served in Afghanistan. He came home, then he got sent to Iraq. I believe he's been there nearly a year, or even longer. I'm in touch with his mom, who's my cousin's ex-wife. I really hope he gets to come home soon. He's only 20.

Well, there's my one-minute timed writing. I guess expansion and then editing would be the next step. I just sent him an email. Expanding...
Posted by Miss Lisa at 9:10 PM No comments: