Celebrate the end of cold & flu season with me 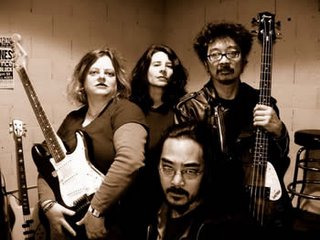 I was supposed to play a show with my new band Death by Stork last Saturday but a bout of flu turned pneumonia did me in for the week. If you’ve ever wondered what you can accomplish while getting over pneumonia the answer is, not much, Jack. Anyway the band found a substitute drummer for me and the show went on--way to go, guys and gal. I hope to play the next gig which may take place in San Francisco and will post the details when they’re available so that all my Bay Area friends can come and rock out thoroughly. Because that’s what Death by Stork does: rocks out thoroughly (and satisfactorily).

I didn’t accomplish much this week it’s true. Had to have someone fill in for me at my new job and paid for several subs at my son’s cooperative preschool where I teach once a week. If I managed to brush my teeth and get dressed, that was a good day. But I did watch a few movies, always a fun time-filler, and one of those was "Mommie Dearest," the 1981 child-abuse-fest with the completely over-the-top Faye Dunaway giving it her all as a mad, demon-possessed narcissist with the cinematic borderline personality disorder. I can 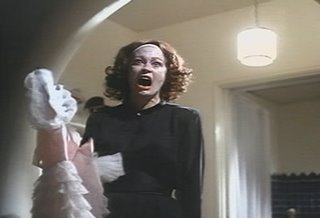 ’t say revisiting this wreck of a film was “fun.” But it has its compelling moments. Like I hadn’t noticed before how many of Dunaway’s outfits matched her home décor, and it was very strange how Christina Crawford, as a child, remained the same age while her brother, Christopher went from what looked about 1 to 5 years old. It leant the film an almost Grimm’s fairytale quality. And why was Christopher strapped to his bed? No one bothers to explain the insanity that permeates. You will also thrill to the terrible aging make-up of Joan’s fictional henchman (henchwoman?) Carol-Ann as she begins the film at around 30 years old and ends up somewhere at 125, outliving her wicked employer. I always wanted a t-shirt with ancient Carol-Ann on it that said, “Poor Carol-Ann.” Maybe it’s not too late for that.

Mommie Dearest is really claustrophobic and unpleasant throughout but if you can keep focusing on Dunaway’s incredible Groucho Marx eyebrows during the violent scenes, you’ll come out all right, with a smug smirk on your face. Much like Cristina’s smug, mocking tone that drove Joan so mad, you too will feel superior to this piece-of-crap in the name of entertainment. 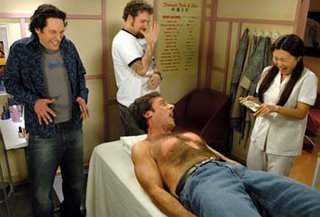 Somewhat more sane, but not by much is “The 40 Year Old Virgin” which starts out profane and turns more sweet as it winds down (a sex comedy that’s over 2 hours takes a long time to wind down). I’m a Steve Carell fan after seeing him play obnoxious on the “The Office” every week, and then dork out in this film so charmingly. Part of the genius of getting the audience to relate to a 40-year-old-virgin is to set him up in sequences featuring the most out-of-control insane people. Andy Stitzer spends the majority of the film scared: of sex, of women, of relationships, of being laughed at by his peers, of moving forward and maturing. Scared of everything but his little action-man figures that he lovingly talks to. No wonder his co-workers think he’s a serial killer. And you can’t blame him for being scared as he tries to hook up in the most godawful drunken environments. I think most people can relate. If you like Judd Apatow-direction, check out his critically acclaimed but cancelled TV shows: "Freaks and Geeks," and "Undeclared." They’re all on DVD now and well worth seeing. I just found out via the Internet that the chest-hair waxing scene was real and had to be shot in one take--no special effects at the insistence of Steve Carell who didn’t think it would be funny otherwise. That’s twisted genius.

Death by Stork is Sue Hutchinson, me, Tony Remington and Andrew Sano.
Posted by Miss Lisa at 10:26 AM 1 comment: