Movies You May Have Missed - Clockwatchers (1997)

I don't know why it took me more than 20 years to see Jill Sprecher's Clockwatchers in full, but life is full of mysteries and this is only one of many. Sprecher, working from a spare and quietly lacerating screenplay co-written with her sister Karen, created the temporary-employee office-noir two years before the much more lauded white-collar satire Office Space. Her stylish study on the de-humanization of the American workforce deserves more accolades, particularly because it stars a stellar cast of four women (Toni Collette, Parker Posey, Lisa Kudrow, Alanna Ubach) as office temps in corporate purgatory. Written and directed and starring women about womens' work experiences within the male-dominated capitalist system—I cannot for the life of me fathom why this cult film isn't more celebrated. What could possibly factor into that I wonder. 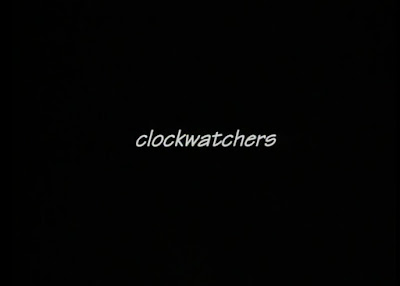 Shy, unassuming Iris (Collette) is a new temp within the insular putty-colored world of Global Credit. It's an environment ruled by the clock, to the point that Iris is completely ignored by the receptionist until 9 A.M. rolls around, wherein she's instructed to sit on a chair to await further instructions. Two hours of muzak-laden negligence later, she's reprimanded by the office scold (née manager) Barbara (Debra Jo Rupp) for following directions.

Anyone who's ever temped before will recognize this barely exaggerated scenario as base truth within the world of middle-management. And guess who's temped for years on end in countless office environments? That's right, me. So consider me your expert on the subject. Aren't you lucky I'm here to vouch for what appears surreal and heightened but is in actuality true in scope? 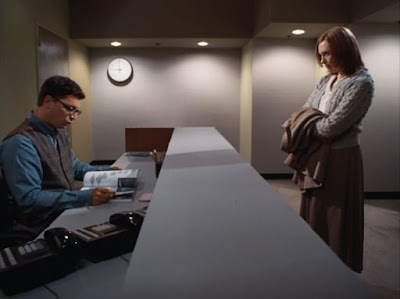 In the sterile confines of her new job in a town with no name, muzak is pumped overhead throughout the day to "boost productivity," barely concealing the buzz of fluorescent lighting and quiet desperation masquerading under polite social norms. Margaret (Posey, sharp and brilliant), a temp who's been around long enough to know all the slacker tricks to get through an eight-hour day, takes Iris on the dreaded "office tour." During which she meets all the office types who would also be parodied by Mike Judge in Office Space: the snitching rule-follower, the grinning golden boy, the patriarchal senior executive, the bossy fuss-budget, the vindictive phony, and the anal-retentive supply clerk (Stanley DeSantis as "Art," close cousin to Office Space's cult figure Milton, played by Stephen Root with similar mumbling weirdness). Is it possible Judge never saw Clockwatchers before making Office Space?–maaaaybe... U.S. office culture trends toward the universal. Still, Art and Milton are practically twins in schlub-brotherhood. 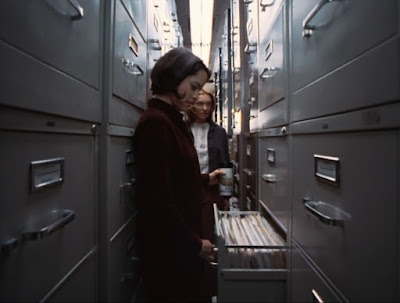 Margaret, who despite her grasping desire to be hired permanently, is styled slightly "off" for office culture, in keeping with her rebellious spirit: skirts a bit too short, shoes too casual and comfy. Decked in warm shades of red, her patterns and florals among the navy-blue power suits read like warning flags, signals about how not to get ahead in this stifling mono-culture. 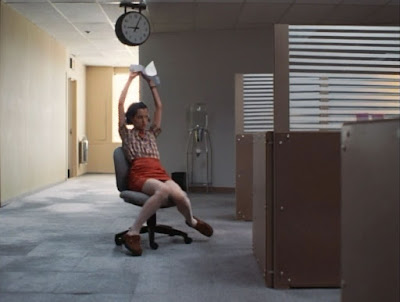 Margaret recognizes the futility of identifying with your job when you're basically a file clerk. Still, she has a terrible work ethic and sucks up to power (gloriously) to get what she wants. She's a scammer par excellence and reminds me of many of the people I was attracted to in my 20s, in and outside of work. 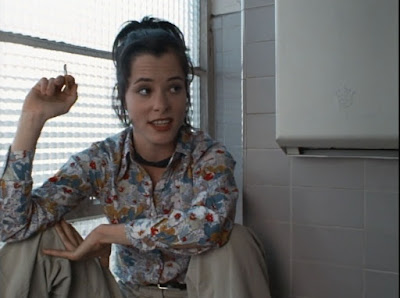 Iris, among her new office pals, begins to bloom within the radiance of Margaret's sass. Soon-to-be-married perfectionist Jane (Ubach, with her huge eyes, a living anime in Chanel suits) and would-be man killer/actress wannabe Paula (Kudrow, flipping hair and attitude way back in '97) are exactly the kind of friends you make while temping—you have nothing in common but the dead-end job, but sometimes for the moment that's enough. 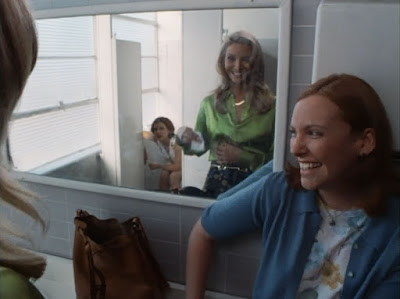 When small personal items go missing throughout the office, things take a dark, existentialist turn. Not that the entire enterprise wasn't dark or existentialist to begin with, but now the four temps, always on the peripheral of job status with their lack of benefits, paid days off, or ability to advance unless offered the coveted permanent position, become the number-one suspects.

Margaret suspects the new permanent hire, prematurely shriveled Cleo (Helen FitzGerald), lurking about, copying Iris' newly acquired beaded and floral styles, to be the thief. Margaret's fury at being passed over for permanent status, her belittling family and ongoing petty scams, along with the office's new security cameras, lack of privacy and suspicion of anyone outside the credit "family" begin to erode the tenuous social glue that holds the little group together. 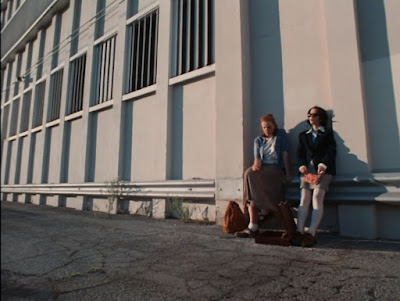 A coup-in-the-making is plotted. The male executives continue to yelp orders or smile condescendingly, never learning the names of the young women who do their shit work for low pay. Although I always appreciated that temp work existed, allowing me to attend school and live in San Francisco among my fellow freaks, I'm here to tell you that this film is eerily accurate. I direct no blame to my former co-workers and managers, the majority of whom were working moms who needed a decent income to live in the Bay Area and raise their children. But office culture still frowns on individuality and free-thinking. This is a purgatory of stultifying boredom for an enforced eight-hour-day (most every job I temped could be done in less than three, but everyone was in denial). 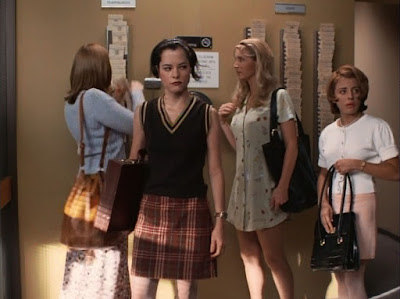 A strident Margaret wants to burn the whole thing to the ground and start over. Who will join in? The film, a wise character-study as well as surreal satire, doesn't make that much of a suspenseful plot point on workers' rights. We can already see the group dynamic disintegrate in small, painful and emotional ways. 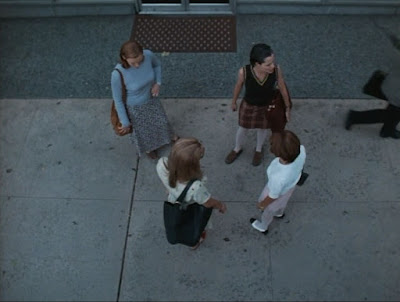 When you need a myriad of emotions from your lead actress, hire Toni Collette. We have to wait a while for Iris to take her stand, but it's worth it. A rare film about women's work and women's relationships and how they affect one another. Add it to your cult-film roster. 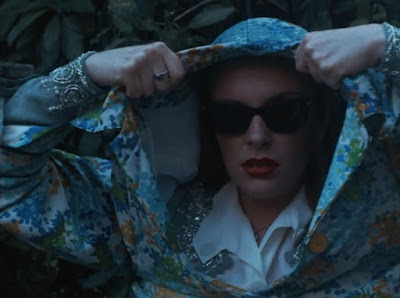 And now, to help with your productivity, I gathered some of the fine Clockwatchers office-muzak soundtrack for you to file your papers by. May you get permanent status and a letter of recommendation, always.


"Raindrops Keep Falling On My Head" - Hugo Winterhalter & His Orchestra


And in keeping with any worthwhile soul-crushing existential office crisis, plenty of offerings from the Paris Musette.

Email ThisBlogThis!Share to TwitterShare to FacebookShare to Pinterest
Labels: comedy jokes, cool girls, movie reviews you can use, the mooovies

She Mob LIVE at Up the Creek Records 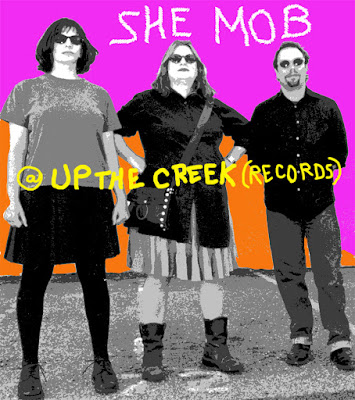 She Mob is playing a dinner show, 6 - 7:30 PM! There will be no dinner, but plenty of records and art and tchockes for sale at Up the Creek in Walnut Creek (California).

Note: there's an actual Walnut Creek in Walnut Creek, so quit making fun of its bucolic-suburb fake-sounding name! It's a former orcharding enclave with a hundred-year-old downtown that used to be a railway stop during the ranching era of Northern California land-use and settlement! That railway is now the Ironhorse Trail—a fine bike and walking trail, so be proud, Walnut Creek. Bicyclists know the score.

Up the Creek Records is in a split-level strip mall—the best kind of strip mall. 1840 Tice Valley Boulevard in BADASS Walnut Creek, California. 6 - 7:30 PM. It's a fun little shop and there's lots of live music there weekly, so check the calendar for future events.

Update: Our friend Debi took these shots of our show—thank you Debi! Great fun was had. We'll play again. Hopefully before we turn 60. 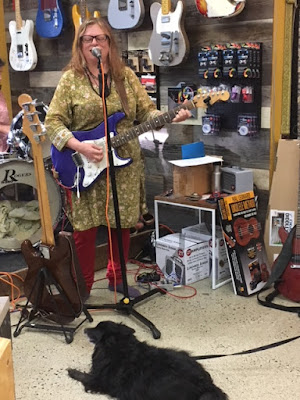 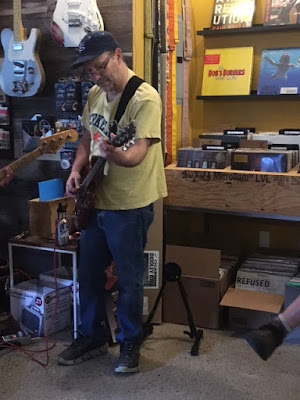 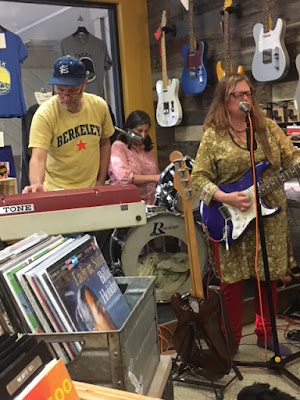 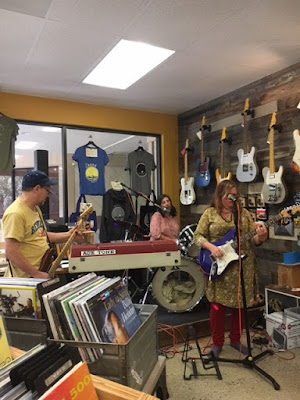 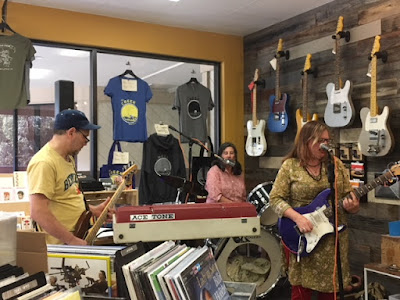