I’ve been thinking that it’s time I gathered a cartoon posse to either take over the world, or at least defend it from evil. Let superior draftsmen (and women) have their classic superhero fantasies; I just want what’s mine--a tribe of misfits to pool our talents and accomplish what current world leaders cannot--perfect universal harmony throughout the known galaxy. And to throw great parties (don’t underestimate the power of the great party). 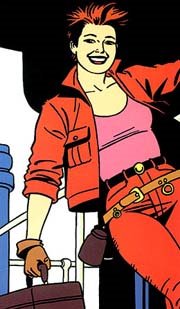 First up, Maggie Chascarillo, Jaime Hernandez’ complex creation who first appeared in Love & Rockets #1 in 1982. Love & Rockets was a bitchin’ publication of Fantagraphics Books and was written and drawn by Jaime and his brother Gilbert, or “Los Bros” as they called themselves.

The first issues effortlessly blended sci-fi, romance comics, and the southern California punk rock scene. As the series progressed, the Bros broke out of the staid genres they had warped and started really focusing on their characters. Maggie is probably the most endearing of Jaime’s universe. She started out as a cute Mexican American punk rocker/auto (and rocket!) mechanic, exploring her relationship with her mercurial pal/lover Hopey, while battling horrible crushes on boys she knew she could not have.

Over the years, she gained quite a bit of weight, drank too much, and floated from one menial job to another. She had some relationships but never as intense as the long-term Hopey friendship/affair. She even dabbled in prostitution for a short time but pulled herself out of that rut to hang out with a bunch of lady wrestlers. She can currently be seen in the NY Times Sunday magazine in a serialized story featuring one of those wrestlers, who is now elderly and may be battling dementia.

Maggie is not fearless. In fact, she is often quite fearful, especially when dealing with her emotional entanglements and attractions, but she’s a very good person, naturally sweet-tempered and has excellent taste in music. She’s had a lot of 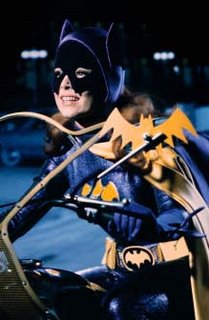 tragedy in her life, broken home, childhood neglect, the loss of her best friend in a car accident. But somehow she just keeps plowing forth. And if breaking into a spontaneous drunken dance keeps her going, we can only wish her the best.

OK, the next one is not a cartoon per se. She's actually 60s B-movie actress Yvonne Craig playing Batgirl--but it's my posse and I get to pick 'em. Yvonne Craig was the first person who made me sit up in front of the TV and think, va va va voom! When she took off her oversized librarian eyeglasses and donned that red wig and skin-tight purple jumpsuit, then whipped out of her secret bat-lair upon her bat cycle to go join fatherly Batman (Adam West) and brotherly Robin (ol' what's his name), well, the results were breathtaking on my childhood psyche.

Back then, there weren't a lot of female cartoon characters who were as action-packed as Batgirl. Lynda Carter's Wonderwoman was a few years away and she was kind of bulky for a superhero--what was with those gold bracelets that deflected bullets--c'mon! Batgirl was of this world. No invisible airplane for her. She shelved books for a living, and presumably read them as well. She was the commissioner's daughter but she was always in trouble. But she sometimes got Batman out of trouble too and she looked hot while doing it. And that red wig--gaaah! I love you Batgirl! Mwa! Mwa! (kissing noises). Head on over to Yvonne's Web site to hear the Batgirl theme song (Yeeeeeeah--whose baby are you? Batgirl!) and order an autographed photo of Batgirl for only $25. 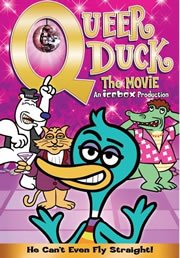 I know you're dying to know who's next. And I think you'll be pleasantly surprised. It's Queer Duck! Queer Duck started out as an Internet cartoon on icebox.com and now he's graduated to his own straight-to-dvd film: Queer Duck, The Movie.

Queer Duck lives in a colorful universe that looks and seems strangely like the 80s, surrounded by his animal friends and lovers, Openly Gator (who sounds a lot like Harvey Fierstein), Oscar Wildcat and Bi-Polar Bear. The film revolves around Queer Duck wondering if his life would be any easier if he were straight. He meets an old stage diva and considers marrying her. What are the consequences of Queer Duck's actions? And what of his 18-month relationship with Openly Gator? These are the questions we must ask ourselves as Queer Duck's drama unfolds.

Queer Duck is hilarious. Written by Simpson's alum, Mike Reiss, the Queer Duck universe is perverse, brightly satirical, and well, queer. Shockingly Reiss admits on the dvd's extras that He's. Not. Gay. In fact, apparently the only gay person who works on Queer Duck is the voice of Queer Duck, Jim J. Bullock. I'm still kind of confused by this confession. Oh well, it's funny.

OK, now I'm going to zip through the rest of this because I've been trying to complete this blog entry for something like a week-and-a-half. The whole idea is starting to get stale in my head by this time. We'll wrap up with Buttercup from The Power Puff Girls, whose time seems to have come and gone. I'm not sure I would have liked the Power Puff Girls when I was a girl. They're kind of violent in a not-so-fun way, although the show is generally very funny. My kid watched it once and kept asking me why they were always fighting so much. I had to explain the concept of super-heroes and bad guys to him. He's still not sure why bad guys are bad. Bad guys don't make sense to him yet. I guess they don't make sense to me either, if I think about it. Anyway, here's Buttercup, the badass of the Power Puff Girls. I like her innate anger and I like how she channels that anger into violently opposing bad guys. She really kicks them in the head. She's not dainty in any way, shape or form. She's a little disturbing.

This is Neon, a belly dance instructor and videographer, originally from Moscow. She kind of looks like a transexual who happens to teach belly dance. She's not a cartoon, but she's certainly a persona of sorts. It's really important to stay in shape when you're fighting crime and Neon will help us keep our womanly figures (sorry Queer Duck) and get us in touch with our shimmy muscles. Plus her costumes are just fab.

Finally, I present Jaquee, my Land's End Virtual Model. I typed up some of my specs on the Land's End Web site and picked out some hair color and a face shape, and wah-la! Jaquee. Jaquee is really only good for trying on

clothes but since I hate doing that myself, she can have the job full-time. And she can shop for them too, because in my world, that's almost as bad as trying them on. By acting as a personal shopper Jaquee will be saving my cartoon posse hours of time that can be better spent doing almost anything but shopping. And you'll be glad to know that Jacquee has been hitting the virtual gym a little more often lately so maybe her clothes size can go down by summer's end. Go go Jaquee!

That's my cartoon posse. I think we'll throw ourselves a little booze-soaked belly-dance fightin' party and maybe get some clothes out of the deal. Then we'll work hard to impeach Bush.

Hot Fun in the Summertime

Fold some paper
Expand your pop-culture knowledge-base
Get rid of your crap. Get more crap for free
You're a little tense--embark upon a meditation retreat
Take a road trip
Study up on vintage garbage trucks
Learn more about "B" movies--what if there's a test? 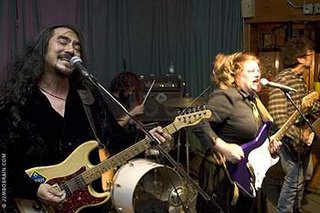 Go see my band Death by Stork at the Starry Plough in Berkeley, Friday, July 28 at 9:30. We're opening for Brian Kenney Fresno and the Fuzzy Cousins. I've never seen these acts, but apparently they rock. Therefore it's quite the night of rock. The Starry Plough is at 3101 Shattuck Ave.
Posted by Miss Lisa at 1:07 PM 1 comment: