To Eastern Canada and Back, Part 1: Niagra Falls and Toronto

Greetings! It's been too long over here in this blogspot. I'm going to lay out our last big journey here, in case anyone is looking for an enriching cultural road trip in the northern regions of the North American continent. Let's go!

Back at the tail end of summer, we landed late at night in Buffalo, NY, and drove the 25 minutes or so to cross the border--on the other side of the poetically named Rainbow Bridge.

It was after midnight when we arrived in Ontario, a block from the Niagra Falls (town of) strip, known as Clifton Hill. At some point in time, a demon-from-hell developer showed up on the banks of spectacular Niagra Falls (the actual falls) and visualized the most demonic tourist trap one block away from one of nature's natural wonders. By dawn's early light it was our first impression of eastern Canada, and it was, and I'm being diplomatic here, a massive bummer.

We could walk to the Falls from our hotel and the first indication that something was amiss on our stroll, was this upside-down house. We've visited upside-down houses before (at least one that I can recall). This one was very tidy in comparison, but somewhat sterile in scope. 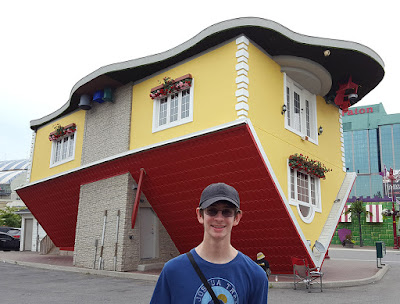 Here's the view on the way to the Falls.

Perhaps reflecting its origin-from-hell, Clifton Hill has an abundance of haunted-house attractions, including Dracula's Castle, Frankenstein's Castle, and a haunted house, which as you can see here, is air conditioned. 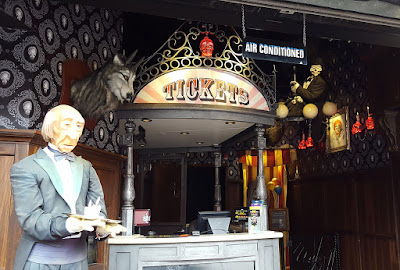 There's a lot of horror to get through--a true vision of hell that asks you to pay upon entry.


You know you're getting closer to the splendor of water and gravity when the surroundings become less of a psychedelic horror-show tourist trap and more of a misty, color-coded rain-poncho and zip-line tourist trap. Keep right on strolling past the USA Falls, which fooled me into saying out loud, "Is that all there is?"


As you continue down the boardwalk to wonder, you finally arrive at the Canadian horseshoe Falls, and it is quite a payoff. 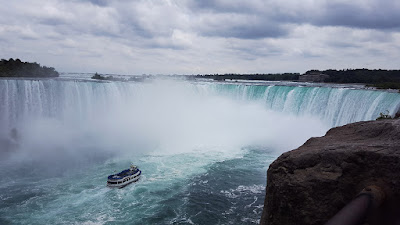 Due to the ridiculous drop-off, you can easily walk all the way to the top of the Falls and watch the Niagra River fall off the face of the Earth. Well, actually just this part of the Earth, before flowing to its way-station at Lake Ontario before becoming the St. Lawrence River on route to the Atlantic Ocean. 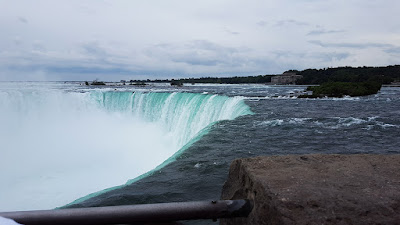 The exciting world of Niagra Falls in less than 20 seconds.


Jackson wanted to take the "Journey Behind the Falls" tour, which wasn't something we would have thought of doing, even though the tour slogan is "Witness the Wonder," which sounds pretty good. The Falls' history as a power generator in years past resulted in some some amazingly engineered tunnels beneath the Falls. They're as impressive as they are damp, if you're into civil engineering and being under one a solid curtain of endlessly falling water.


Plus there's a lookout point that Jackson made good use of.

On to Toronto--just a two-and-a-half hour drive away. The first rule of Toronto seems to be: everyone is cool. I know we only spent two-and-a-half days there, but coming from the current volatile political and cultural situation in the U.S., Toronto is a city that knows how. It's a diverse, cosmopolitan, cultured city with an international flair. And everyone is dong their thing and that's good--that's the vibe.

The other noticeable trait is pointy towers. So many pointy towers. It's as if Eastern Canada had a architectural chip on its shoulder during its foundation, and had to out-tower the tallest towers of Great Britain, and had to do it with trillions of bricks. This is something that we as Californians rarely see--bricks are not earthquake-proof building materials. 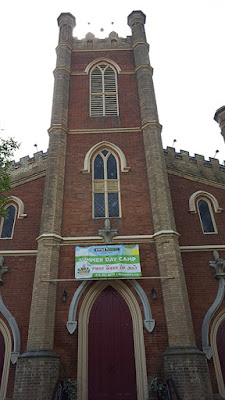 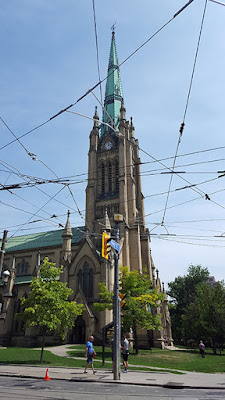 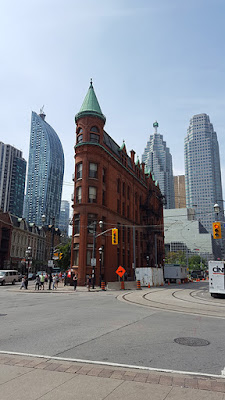 Get ready for more extra-tall pointy architecture as we make our way through Canada, but first: DOG FOUNTAIN!


Yes, it's the dog fountain of Berzcy Park and it's delightful. A stroll through the city becomes magical when city councils vote in these high-concept projects. Hail, the stellar work of landscape architect fountain designer Claude Cormier.

We split up the following day for two Toronto experiences. Keith and Jackson headed over to the Hockey Hall of Fame. Keith comes from a family of Canadian hockey players, a legacy that continues with our nephew's team's Eastern Connecticut State Championship win this year (go Eagles!). Last spring, Keith and Jackson flew across the U.S. for a three-day trip to watch the Eagles' final game, so I can say with confidence: they are hockey fans.

I chose to visit the Art Gallery of Ontario (AGO), after careful consideration and no further research other than a blurb in our guidebook. So I didn't know AGO is one of the largest museums in North America, nor did I know that it would be one of my favorite museum visits ever. I just knew it had some great architecture.


There was such a wide-ranging selection of galleries and exhibits. I was lucky I had most of the day to wander around in a ecstatic daze. The sights and sounds of the Kenojuak Ashevak (1927-2013)/Timootee (Tim) Pitsiulak (1967-2013) retrospective, were colorful, stylized and inspirational. Stonecut prints, stencils, pastels, colored pencil, India ink, paper--these humble tools in the hands of masters like Ashevak and her nephew Pitsiulak inhabit an Inuit world of bird spirits, sun faces, arctic creatures, snow equipment, the cockpit of a small aircraft--all so impeccably rendered in fluid, colorful simplicity and power. A reverberating soundtrack of poetry, wind- and whale-song echoed throughout the extensive exhibit. A true celebration of artful and spiritual expression.


Without knowing what lay ahead, I wandered into a back-corner gallery and found a retrospective of one of my favorite portraitists, Kathe Kollwitz (1867-1945). Kollwitz was another illustrative magician with her charcoal, pencils and etchings. She studied human faces and never looked away from human suffering, poverty and mortality, including child mortality. She is dark, but then, so is life. One of art world's great humanitarians.

More wandering around brought more surprises. Here's John Scott's Trans Am Apocalypse No. 3 (1998-2000), a 1980 Pontiac painted in black house paint with the entire text of the Biblical Revelation of St. John the Divine etched into its exterior. It was being restored throughout the summer months in full view as part of its exhibit. I don't know in what ways this piece affected me, but it did, and even though this was made in Canada, I think it's a brilliant method for U.S. citizens to read their Bibles. 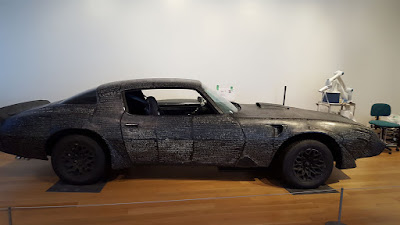 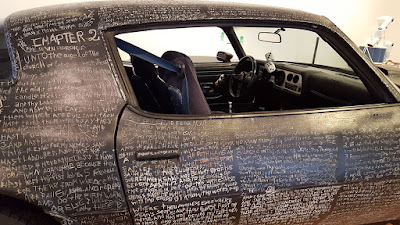 Rebecca Belmore's solo show "Facing the Monumental" was truly monumental. She is a multidisciplinary force to be reckoned with--sculptor, photographer, videographer, installation artist, performance artist--this 30-year retrospective was a museum in itself. Some artists are world creators. Belmore is that as well as a world truth-teller. She makes you face the world, even its hidden parts we rarely hear about in our information age. Her work says, "Look at this. Think about this. Know this."

Belmore is a member of the Lac Seul First Nation (Anishinaabe), and after spending some time with her work, I have a much deeper understanding of the injustices suffered by Canada's indigenous people, particularly the women. This is only amplified because I know the U.S. is a mirror image of Canadian policies. I'm still waiting for our government to address this publicly and to make amends.

Belmore uses nature as part of her materials. I can't do Fountain justice, but this dark room featuring a video projected onto a wall of falling water, was an immersive experience. You could hear it throughout the gallery--a whooshing tremendous rainstorm of a sound. Upon entering the room, the pipes and spigots and trough that make up the projection screen take up an entire wall. The force of the falling water into the trough sends drops up and around the screen and there's puddles on the floor from this upward water motion. That alone is stupefying. Projected onto the water screen is a video of the shoreline, Belmore herself in the ocean, a bucket, and blood. It's just amazing--cinematic, yet of nature and the elements.

A tiny snippet from the video:

What is the overriding theme of an AGO experience? All the contemporary artists are Canadian. And they aren't messing around.


More pointy buildings of Toronto. From the delightful Kensington Market neighborhood--an entire neighborhood, closed to cars, featuring vintage architecture, murals, restaurants, produce markets and shops--this is a thing in Canada and I highly recommend it, city planners of the world. 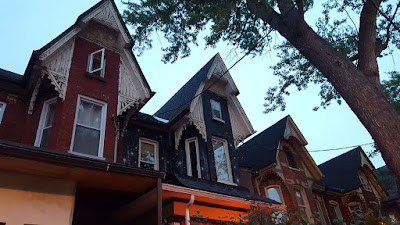 Email ThisBlogThis!Share to TwitterShare to FacebookShare to Pinterest
Labels: art for what ails ya, family time, photos, road trippin'

She Mob Plays Live at The Octopus Literary Salon 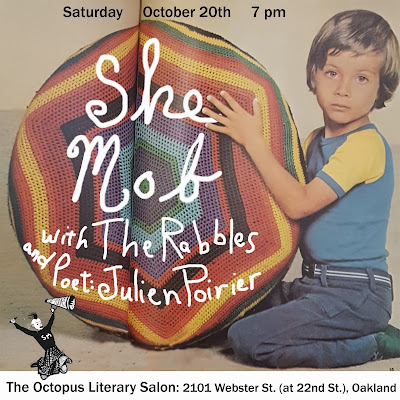 She Mob opens for The Rabbles and poet Julien Poirier at Oakland's Octopus Literary Salon on Saturday, October 20th. Show starts at 7 p.m. -- a very humane time for a live-music/poetry show. Rock out, poets!
Posted by Miss Lisa at 7:17 PM No comments:

Email ThisBlogThis!Share to TwitterShare to FacebookShare to Pinterest
Labels: Oakland, reading is free, She Mob, the music is the message
Newer Posts Older Posts Home
Subscribe to: Posts (Atom)