I don't call out gender in music too often lately but once in awhile I'm compelled to ponder the reality that while growing up, there were very few women in rock until the late 70s. Before that there were plenty of supreme singers and performers, and a few rock iconoclasts (Janice, Tina, Grace, Genya Ravan, the group Fanny—who am I forgetting—help me out Internet, it's late and this week has been full of horrific gun violence that has scrambled my synapses). But thank god for the late 70s and early 80s were a goldmine of women began rocking out. I mean, rocking. Out.

It was thrilling to discover more and more of these women on college radio, in magazines and books (books!) and from people you just happened to meet at a friend's house, at a party, or at school, who pushed an album into your hands and said, "You have to listen to this! She's my favorite! You can borrow it if you want." (Bless you for that, generous friends with your adventuresome album collections.)

Kristin Hersh - "Like a Hurricane"
You might not realize that Hersh has been songwriting and rocking on the guitar since she was 14 years old in 1983. Back then I had an early Throwing Muses EP with its stop/start tempo-changing artfulness, but lost track of her and her groups over the years. Then a couple years ago my friend and bandmate Joy called me up and told me Throwing Muses had reformed and we should go see them.

I was like, "I'm 50 years old. I don't need any dissonant chord changes in my life right now, but thanks." But Joy insisted and  we both realize that when one of us insists on something cultural, especially musically cultural, the other should comply—or suffer the consequences of a barren existence. So I bought my ticket and went to the JCC in some nondescript San Francisco neighborhood.

AND IT WAS ONE OF THE BEST SHOWS OF MY LIFE.

Kristin Hersh is the real deal. She did things on the guitar that blew my mind several times over. Her confidence and poise onstage is astounding. She is my Bob Dylan. The moral is, if Kristin Hersh comes to town, GO SEE HER. Wait for her guitar to truly kick in here. She can wail in more ways than one.


Here's Neil Young doing his great "Like a Hurricane." I've seen Young play live with Crazy Horse several times, and it's just like this, with the plaid shirt and the wind in his hair and everything. Neil Young is a national treasure. Here you can see his huge influence on the grunge scene to come. Without meaning to, he influenced an entire generation of disaffected northwestern youth, who were all tuning into his wavelength around the same time, having heard him on the radio growing up. That was cool how that happened sort of accidentally, through the force of his musical vision, prolonging his career well into the 90s.

Barbara Manning - "Rickity Tickity Tin"
This is Barbara's take on a Tom Lehrer folk parody (see below). Who is Tom Lehrer? Oh, he's great. Check him out. So is Barbara Manning. She writes, she plays, she sings like an angel. She makes the song her own for her psychologically dark rock-opera album 1212, even changing the title of Lehrer's song. And it works.


Tom Lehrer - "The Irish Ballad"
My son is a big Lehrer fan. Lehrer retired long ago from songwriting and performing and taught math at UC Santa Cruz where he still lives, perhaps among the redwoods, which I wish he'd write a song about.

The Go-Go's - "Our Lips are Sealed"
I've never known what the genesis of this song was until Wikipedia set me straight (hopefully—you know how it goes on Wikipedia sometimes). I always thought this was a cover of a Fun Boy Three song, but they were released in the U.S. and the UK around the same time in the early 80s, so how was I to know conclusively?

It turns out it was co-written by Jane Wiedlin and Specials/Fun Boy Three singer Terry Hall (with drumming and backup vocals provided by The Mo-dettes'  June Miles-Kingston on his version), and while the Go-Go's version did well in the States, the Fun Boy Three arrangement was the one that rose to the top of the charts in the UK. Go figure. Anyway, according to Wiki, Wiedlin and Hall were having a "thing" while their bands were touring together and he had a girlfriend at the time, and you how that goes...


Fun Boy Three - "Our Lips are Sealed"
I think we can all agree, Belinda Carlisle is the cutest lead singer (of all time perhaps), but the Fun Boy Three arrangement definitely has its haunting charms.

The Pretenders - "Stop Your Sobbing"
It's a Ray Davies/Kinks song. He wrote so many great ones. Later he and Chrissie Hynde would be married, for a time. Hynde deserves many props for her iconoclastic tough-girl with the smooth voice persona back in the late 70s when she was writing music journalism in the UK (having fled Ohio for a more interesting life) before starting her band.

The Pretenders were a great group, absorbing the dynamic musical convergence that were going on in the UK at the time—spurring each other on to heights of musical experimentation within the pop-punk genre. I don't think Hynde ever got over the tragic early deaths of guitarist James Honeyman-Scott and bassist and "Brass in Pocket" muse Pete Farndon. Her edges softened once she moved back to the States and I just don't find her as interesting now. But that voice. That voice.


The Kinks - "Stop Your Sobbing"


BONUS: The Pretenders - "I Go To Sleep"
Another Davies song, only released as a demo by The Kinks.

Email ThisBlogThis!Share to TwitterShare to FacebookShare to Pinterest
Labels: cool girls, cool guys, the music is the message

I love ya, America 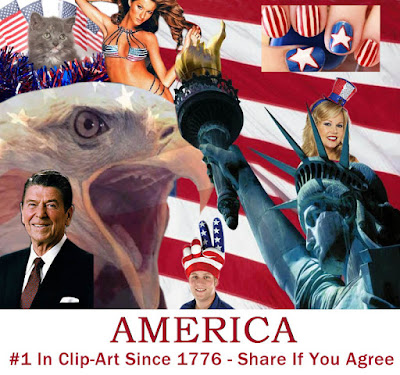 What's extra special about this is it contains no actual clip art.
Posted by Miss Lisa at 10:50 PM No comments: