I wanted something to post after Christmas, just to wipe the slate clean here. I mean, look at all the Christmas posts--there's way too many. But I got...nothing. So this photo of Sean Connery from ZARDOZ will have to do. Sorry about this. 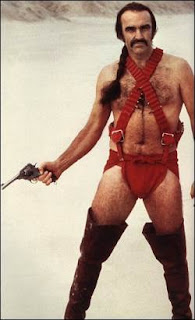 But it worked, eh? You're not thinking about Christmas any more, are you? I guess NOT. 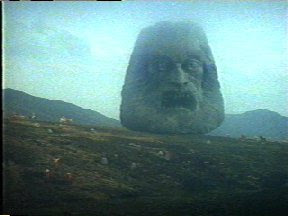 I once saw this head in my parents' garage, floating a few inches above the floor one night when everyone was out and I was housesitting. It looked up at me and said, "Ruh, ruh, ruh," a few times. I stared at it with complete incomprehension until it moved slightly, wagging its tail, and I realized it was our new neighbor's Scottish Terrier, which had somehow gotten trapped in our garage. If you ever come across a Scottish Terrier in a darkened area, it will appear to be all head and no feet. It's a cool ZARDOZ visual effect I won't soon forget. That's movie magic.
Posted by Miss Lisa at 9:26 PM 2 comments:

Email ThisBlogThis!Share to TwitterShare to FacebookShare to Pinterest
Labels: the mooovies, What the 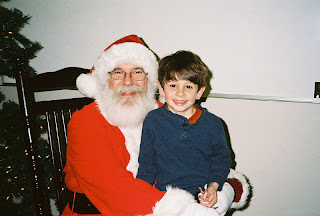 He asked Santa for a coffee maker for Christmas. It's a toy that actually drips. Santa doesn't have to know, and if he brings a real one, no one around here will complain.
Posted by Miss Lisa at 10:21 PM No comments:

A couple of weeks ago we rode the Holiday Express train--the Southern Pacific Daylight X4449--along the Willamette River for a 45-minute tour (with Santa aboard). We researched the weather to find the one sunny day this month and we went for it. Built in 1941 and retired in 1957, the SP4449 took passengers from Los Angeles to San Francisco in style. It's considered by many to be the most beautiful steam engine ever to run the rails. 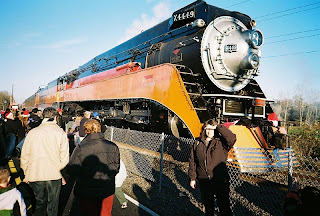 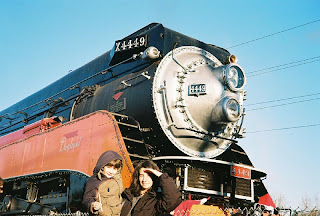 I have to admit: it's exciting to ride a steam engine. It's all that puffy steam and the haunting sound of the train whistle and the clickety clack sounds as you pass from car to car. The SP4449 was donated to Portland a few decades ago and is still looking for a permanent home. Volunteers keep her running. I found a nice YouTube video of her as she glides past a Northwest train crossing. Listen to me! I'm like an old codger. Steam trains will possess you!

source
Posted by Miss Lisa at 9:37 PM No comments:

Celebrate the birth of Jesus (estimated) at uglychristmaslights.com. 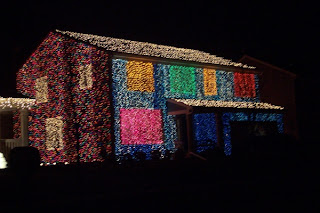 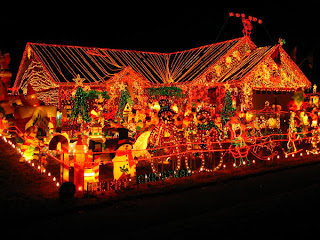 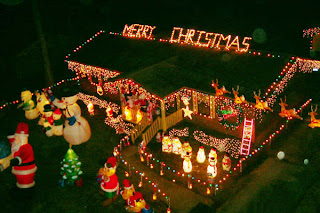 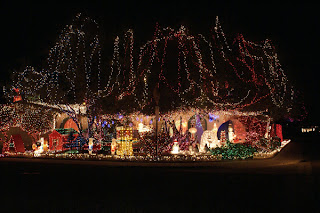 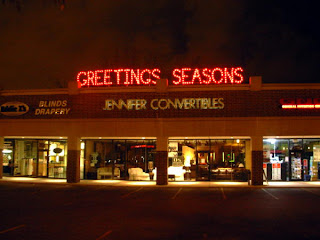 
Thank you Jezebel for turning me on to John Roberts and Clay Weiner. Source: YouTube
Posted by Miss Lisa at 9:44 PM No comments:

Plasti Dip for the Holiday

A new 35mm print of the 1982 indie hit, Diva, is touring the country. Is it coming to your town? Check the schedule here (and watch the trailer). It's been too long for me to remember all my impressions of this film, other than: very colorful, very arty, very opera. The Ironwood Cafe in San Francisco where I worked for a couple of years would play the experimental soundtrack to chase people out of the restaurant when they lingered past closing time. We all loved that soundtrack because it meant the bosses wanted us to clean up and go home for the night. That's the power of art. 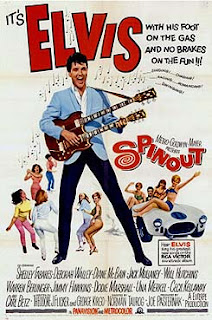 What's your desert-island Elvis film? Hey, quit laughing. Mine's Spinout. Not because it's good, because it definitely isn't (what Elvis film is?), but because it's entertainingly bad. That's a rare accomplishment in the Presley film pantheon. Elvis auteur, Norman Taurog, was almost 70 years old when he directed Spinout in 1966—the perfect guy to shape another winning Presley performance, featuring the world's leading rock sex symbol as a drugged out, neutered version of himself.

Taurog and Presley had an ongoing working relationship, having made Blue Hawaii, G.I. Blues, and Girls! Girls! Girls! together. They'd go on to create Double Trouble, Speedway, and Live a Little, Love a Little; none of which is as ca-razy fun as Spinout, in my opinion. How do I know this? Because back in the day, before cable TV, there was a little show called "The 3:30 Movie," and when you came home from school, you could watch this if your mom wasn't uptight about your viewing habits (mine wasn't—she loves TV and is a big influence on my life). At times I would give in and watch an Elvis film, though they were never as good or cool as "monster movie week," or the occasional Hitchcock festival (always featuring The Birds, which guaranteed that you would ask your friends the next day, "Did you see that guy with his eyes pecked out?!?").

Spinout was probably my first bad film that I liked because it featured such an inane plot with supposedly grown-up themes. A barely awake Presley plays Mike McCoy—alpha-male, race-car driver, rock band leader. The plot is basically swiped from an "Our Gang" comedy. Picture a chubby little boy saying, "Awwww, girls! Who needs 'em?" and a Buster-Brown-haired little girl retorting back, "Just you wait—you'll change your mind!" Only with an all-adult cast aggressively dressed in go-go attire, and that's Spinout.

Memorable moments: The drummer in McCoy's band is a girl who everyone thinks is a guy. She has to keep reminding them, "I'm a GIRL—not a GUY!" She's also a gourmet cook and serves the band meals on fine china in the middle of their bohemian campground when they're between gigs. There's also some great (now-vintage) instruments in the film: a double-neck guitar; Elvis plays a really groovy 12-string in one scene. Too bad the songs suck and are more like cabaret than rock, but you gotta admire the look of it all. Also, the film really should have been called FRUG OUT, since every musical number consists of a hundred or so blessedly wide-hipped women, frugging to the crazy cabaret beat. It's like the choreographer shouted, "That's it! Keeeep frugging—yes! Follow Elvis around the pool. Keep FRUGGING, DAMMIT! Never! Stop! The FRUG!"

Perhaps Spinout endears because it contains a grain of truth about the life of its star. Even sleepy and a little pudgy, Elvis really did have nearly everyone around him in a sexual frenzy at all times during his young-adult life. He sleepwalks through his role with a bemused smile, a lazy (slurry?) drawl and a bit of his younger-self charm. He makes an effort to move his arms around a little when he performs his terrible songs (memorable chorus: I'm just wild about Smorgasbord, I'm just crazy about Smorgasbord.). He was down, but not yet out. The frugging hadn't completely trampled his spirit. And now:

The Mitchell Report is out and it contends that baseball is tainted. Tainted! Who knew? Apparently, everyone: the commissioners, the player's union, the owners and the fans. Howard Stern has always had a good take on the rumors of steroid abuse in major league baseball. He thinks baseball should start a steroid league and be done with it. What a welcoming idea. That way we don't have to feel bad about all the cheating and deceit and corruption. Here's my design for the hat. 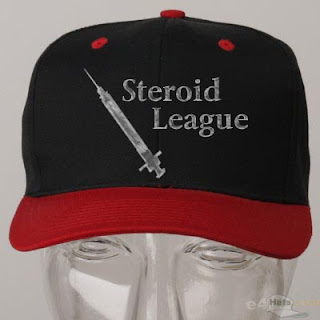 By the by, George Mitchell is the former democratic senator from Maine who chaired negotiations for the Belfast Peace Agreement in Northern Ireland in 1998. What a champion.

source: drugfree.org
Posted by Miss Lisa at 2:41 PM No comments:

My cousin Frank Quirarte took some rad shots of surfer Darryl Virostko (Flea) surviving the wipe-out of his life along the Pacific coast. Mavericks is a strange phenomena: skyscraper waves too far out to see very clearly from the shore. Everyone jet-skies to these monsters. My cousin co-founded the Mavsurfer site, which features all information on the Mavericks surf-contest and many more of his photos. I don't really get the whole Zen-surfer thing. It seems kind of macho to me, but here are some shots, featured on SFGate (along with the story by Bruce Jenkins) Amazing. I know my cousin goes by Frank but he's still Frankie to me (I think). 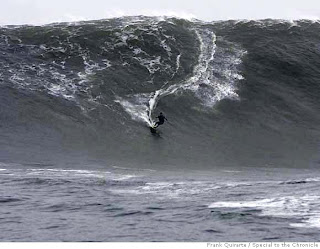 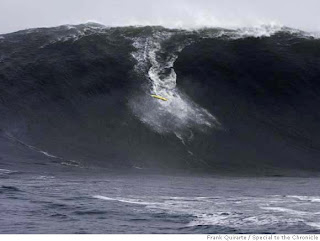 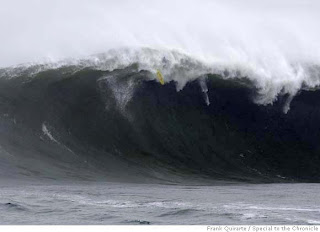 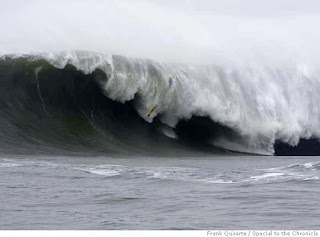 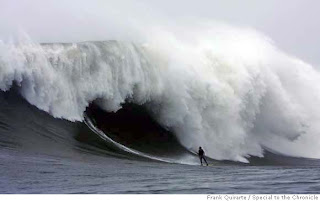 Oregon Sure is Pretty

Some photos from October, 2007. We drove along the Columbia Gorge Scenic Highway to partake in some waterfall watching. The fall foliage was amazing and long-lived this year and we wanted to soak up all its ambiance within a 35-mile range of our home. We were foliage-greedy. 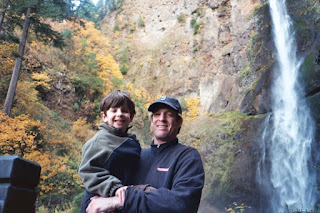 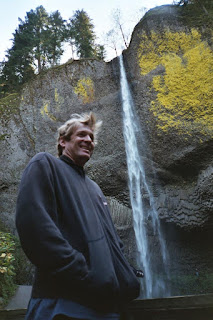 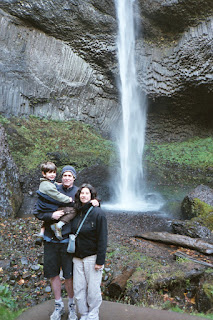 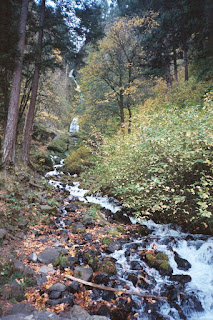 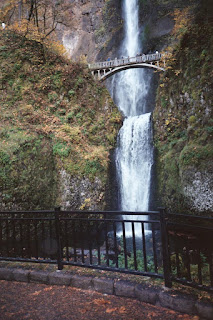 My parents visited us and we insisted that they enfold themselves into the cramped back seat of our car so we could drag them to the Portland Japanese Garden for another foliage-soak. It was worth the claustrophobic drive. This is my favorite garden ever. So peaceful and artistically tended. 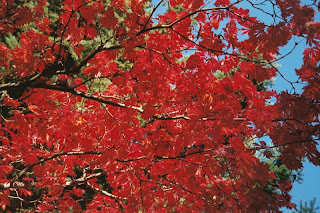 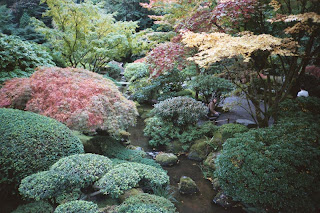 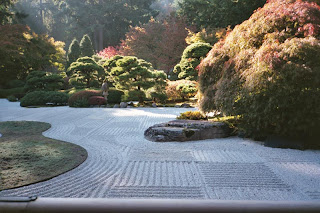 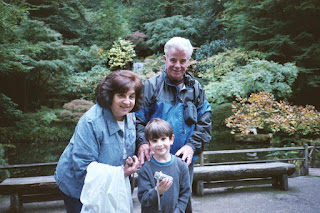 Modern Christmas music is quite the slog. I guess all the major themes, religious and secular, have been touched upon before. This Cracker

tune is not too painful though. A bittersweet memory of a love affair that couldn't last--all the major David Lowery themes.

Over at JasonHare.com, Jason and his blog friend, Jeff, are celebrating the 25 days of Mellowmas: a daily countdown of shitty Christmas music with commentary. Don't miss their take on a "Jim Nabors Christmas" (Jeff's quote: This is like Christmas with your grandparents, if your grandparents hate you.).

And For total secular-craft fun, make a digital snowflake.
Posted by Miss Lisa at 1:50 PM No comments:

Phyllis Diller on TMZ discusses her art, her muse (Mr. Cat), and the Phyllis Diller rose. Her deadpan take on Britney Spears is equally refreshing. Phyllis Diller: keeping it real for more than four decades. 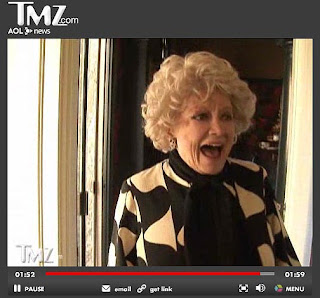