Well, the Jolie-Pitt's have a new addition to the family, Shiloh Nouvel Jolie-Pitt, born May 27, 2006. It's going to be tough to buy that kid a personalized pencil.
Posted by Miss Lisa at 10:38 PM 2 comments: 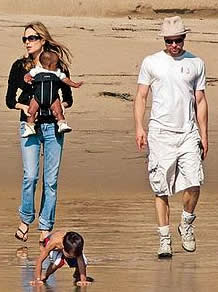 These are heady times. Our country is fighting a war over weapons that don't exist. Our president is a sociopath without the ability to effectively lead a poodle on a leash, much less a world super-power. Avian Bird Flu has landed in New Jersey and is about to become a made-for-TV movie. And Angelina Jolie is a U.N. goodwill ambassador and fighting for children’s education throughout the world. I bet Danny Glover would kill for that job, but it was offered to Angelina and she stepped up to the plate. Now the woman who would wear a vial of Billy Bob Thornton’s blood around her neck will tend to the world’s ills. We wish her well on her journey of self-, er, world-discovery. The other night when I was wide awake between the hours of 3 and 4:30 a.m. (even the MacArthur Freeway is quiet then), I couldn’t stop thinking of baby names for Brangelina’s upcoming offspring, which is set to debut this month. This sad little window to my mind merited the following entries. I really care about the world!

Ayn Rand (for a girl)
Atlas Shrugged (boy) - great promotion if the two decide to star in the rumored film of the book.

Jim (it’s weird but I think it works)

Maybe this week the couple will be blessed with a genetically endowed baby. Good luck Angelina. Giving birth is very cool. Stay hydrated. Know that in my insomniac state, I think of you...
Posted by Miss Lisa at 10:19 PM 2 comments:

Email ThisBlogThis!Share to TwitterShare to FacebookShare to Pinterest
Labels: blog-arrific

Let's Talk About Me

I'm such an id'jit that I forgot to post that my old band, She Mob, was playing a live broadcast at KFJC last Saturday night. I told a couple of people who I knew could get the Foothill College station in the South Bay, only to be reminded the next day by my friend and former Web guru, Tuckers, that KFJC is online. So I could have told the WORLD to listen in. Oh well. I definitely haven't been running on all six cylinders lately. Be sure to listen to this station regardless because it's definitely one of the best around. I haven't heard the recording of us yet. Apparently there was some sound problems with our vocals, but the noise came through just fine. It was nice to play with Alan Korn again, which I haven't done in a while.

Meanwhile, Sue Hutchinson and I, founding members of She Mob, have formed a new band with two guys, Andrew and Tony, called Death by Stork. We're trying to get a show together for July, probably in San Fran. And so until then Tony has placed some rehearsal recordings on our obligatory My Space site. The hi-fidelity Radioshack mono recordings will have to hold the public over until our big record deal comes through. I think I've done enough self-promoting for one night. I'll slink off to bed now...
Posted by Miss Lisa at 11:34 PM 2 comments:

Email ThisBlogThis!Share to TwitterShare to FacebookShare to Pinterest
Labels: She Mob

Proactive and In Your Face

Thank you Stephen Colbert.
Posted by Miss Lisa at 11:15 PM No comments: