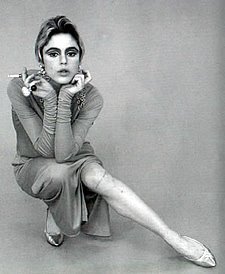 Every five years or so I re-read Edie - An American Biography by Jean Stein & George Plimpton. I don't know why--it's one of the most depressing biographies on record. But there's something so fascinating/repellent about the whole Andy Warhol 60s scene. I gather new things from the book every time I get through it. When I bought it back in the 80s I just drank it all in. The whole upper-crust privilege, artist muse and downfall trajectory. Then I got into the Edie persona: beautiful damned and doomed. Then I got into Andy Warhol and found out all about him (uh, gee, I'm a fan!). As of this reading, I'm seeing how mental illness runs in families and how devastating it can be. As deadly as any genetic mishap or cancer. Poor Edie really wasn't long for this world and at least she got to go out as a former creative force of sorts.

The Stein book makes Warhol into a villain--a social vampire feeding on the poor souls that are drawn to his banal charisma, using them up then spitting them out onto the dirty sidewalks of New York where they are incapable of getting sober and living productive 60s lives as house-wives and house-husbands. I think not. He was genius at surrounding himself with extremely creative people who were never going to fit in to society no-way no-how. And he gave them outlets for their crazy amphetamine-fueled energies. And they had a great time, which is sort of hinted at in the book, but mostly in a house-of-horrors way. Like any creative collaboration, there are good times with the bad. Otherwise the Happenings just wouldn't uh, happen.

Now Warhol is revered by writers and critics as one of this country's greatest artists. Sometimes that happens. The 80s were not appreciative of his celebrity-fawning and Studio 54-going ways. But his take on American culture was pretty astute and extremely deadpan funny and macabre. What would he make of us now I wonder? Andy Warhol was taken away a little too soon: bummer. Interpret our culture as you will, you won't have Andy Warhol to help you out any more.

That said, always remember: Speed kills. And turns you into an asshole just before you die. So stay off that stuff.
Posted by Miss Lisa at 10:26 PM

Email ThisBlogThis!Share to TwitterShare to FacebookShare to Pinterest
Labels: art for what ails ya, cool girls, cool guys

Warhol. Was he Satan? Or a profit? He's so intriguing that I can't get enough of him.

I remember reading Edie. I think you lent it to me. It is a fascinating look at the self immolating.

I was searching blogs,and I found your site.Please,
accept my congratulations for your excellent work!
If you have a moment, please visit my site:
diet home
It pretty much covers diet home related issues.
Have a good day!