The Fabulous 80s New Wave Fashions of "Edge of Seventeen"

Edge of Seventeen isn't just a Stevie Nicks song that is now stuck in your head for the next 17 hours—it's also a coming-out coming-of-age film directed by David Moreton, set in Sandusky, Ohio in 1984. If that doesn't pique your interest, I don't know what's wrong with you. Did you not catch that?—coming-of-age, 1984, Sandusky, OHIO?

Made in 1998 and timelessly reflecting gay youth experiences in small towns across the nation, Edge of Seventeen was an audience favorite at Sundance. Although it starts out slow, the emotional threads ring true, thanks to the strong cast and "every teen" status of its lead, Eric, played by Chris Stafford. And most thrillingly for me, the new-wave fashions are not merely an 80s set piece for us to point to and snicker at, but a creative indicator of Eric's state of mind as he figures out his sexuality among family, friends and new-found gay cohorts. As Eric finds his true self, his style begins to reflect his sense of joy, wonder and freedom. The 80s, with its genuine underground music scene and party-fueled fashion sense, is a perfect cinematic setting to do so. 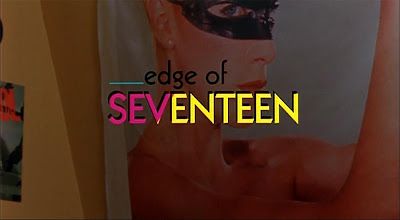 When we first see Eric get dressed (this is a fashion post, after all), he's clad in a drab polyester uniform, ready to start his summer job in the restaurant of the local amusement park. Futilely trying to iron out the creases in his pants, Eric is powerless to control his outward appearance in a conformist society. 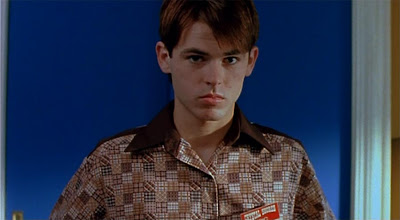 Eric's typical middle-class teen home life is established in the looks of Mom and brothers in one shot (featuring a 110 instamatic camera—a nice touch from the props department). 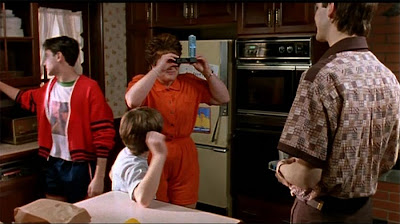 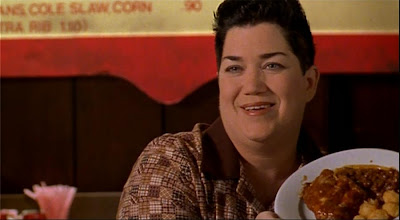 After a new haircut and dye job, via his best friend Maggie, Eric embraces his passion for new-wave fashion, to the consternation of his mom, a loving but very straight-edge lady with zero style points to her name.

The mean girls and non-ironic proto-preppies of high school can't get down with Eric and Maggie's personal forms of self-expression. 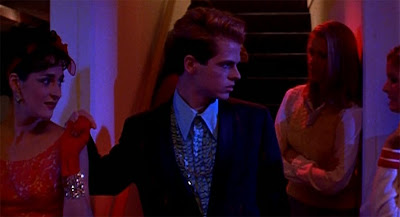 Even though they are clearly the coolest kids in Sandusky. 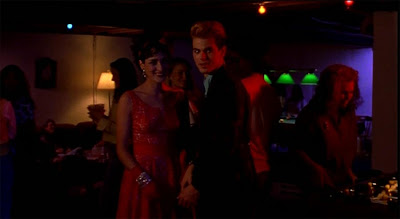 And when Eric deals with his sense of social isolation with excellent emotive dancing to the only synth-pop song of the night, the galumphing drones turn on him. 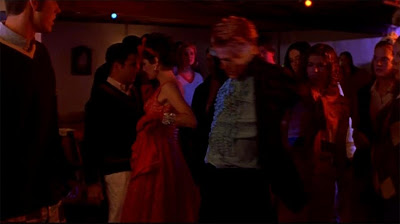 Thank God for Angie's new gay bar, The Fruit & Nut Company, located at the edge of town off of highway...whatever. It's here that Eric meets his new posse. 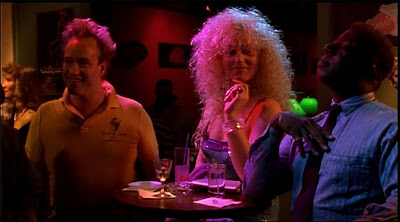 Where dancing is FUN—not a form of ostracization. 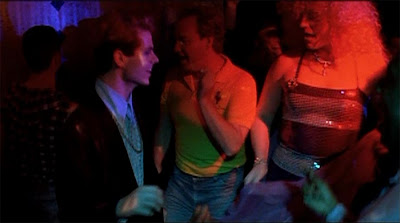 With his new-found friends and potential boyfriend(s), Eric has got a new spring to his step. In fact, he becomes so buoyant, I can barely capture him in a movie still. But I will try. Ties were big in the 80s. This one is bigger than most. 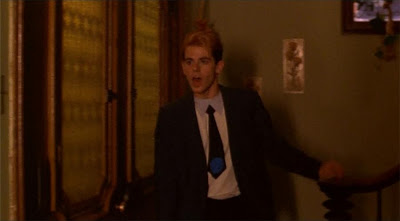 Every human being who ever went out in the 80s had to first style up with a jar of Dippity-do. It was REQUIRED. 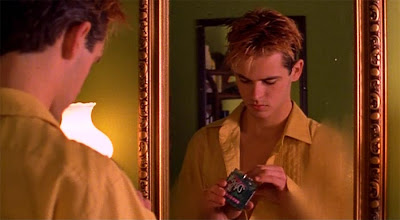 Eric's parents are beginning to wonder what exactly is going on with their son. He can't possibly be going over to Maggie's house this often, especially wearing this: 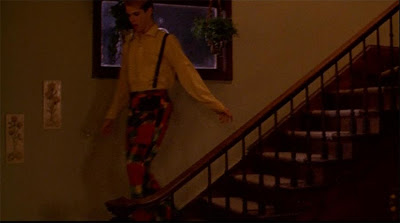 Thrift-store shopping is another fine activity for 80s teens to partake in. Better than drugs and in 1984, much cheaper too. 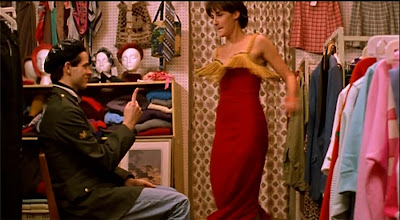 This is a telephone, not exactly a fashion accessory, but now that I think of it... 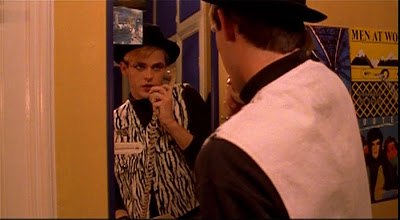 Eric is looking fine and patiently awaiting the ticking clock of senior year so he can blow this popsicle stand and escape to New York City. 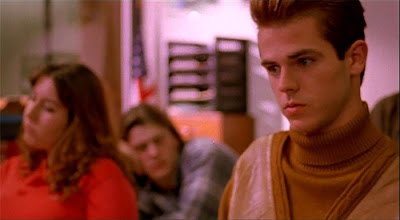 Believe it or not, in the 80s you could get laid while wearing this outfit. It was that kind of era. 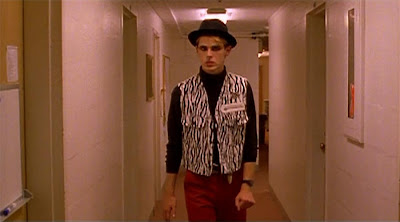 The fabulous Angie entertains in a classic 70s-junior-prom tuxedo shirt. I will never tire of this look. 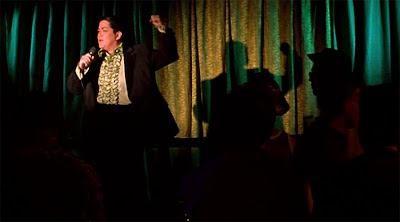 Angie's club—I want to go there. 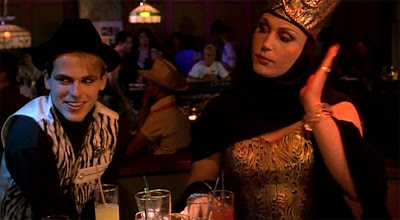 Maggie isn't so sure. She tries a little too hard to make an impression, but "A" for effort. 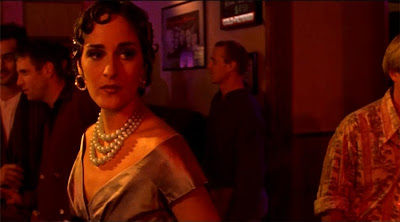 The horror of Eric's mom's ensemble adds an extra dimension of tension in this confrontational scene. How is this woman ever going to understand her son? If clothing is a message, the message is not good. 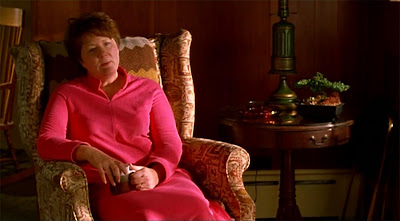 Even when brooding alone in his room, Eric makes a point of dressing right. 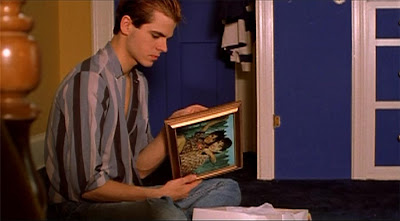 Low-budget lighting doesn't allow for the full glory of Angie's smoking jacket to come through here, but a decent vintage smoking jacket was de rigueur for every stylish hipster of the 80s. 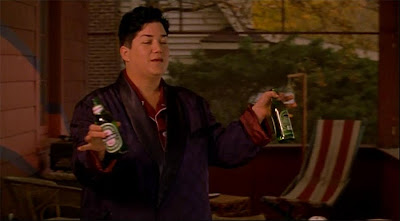 And buttons! You had to have at least seven political, musical and/or satirical buttons on your lapel area. They were the essence of your very being! 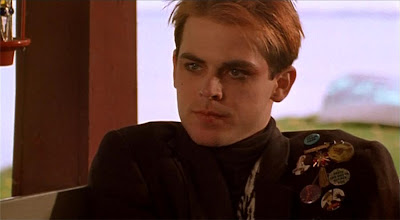 Maggie's vintage sweater and pedal-pushers—spot on for the era. 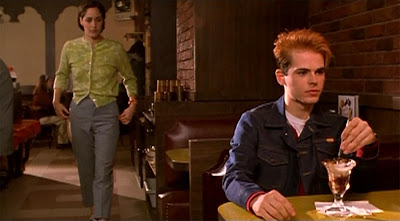 As Eric truly accepts who he is, his shirt gets extra sparkly with golden significance. Bonne chance, Eric! 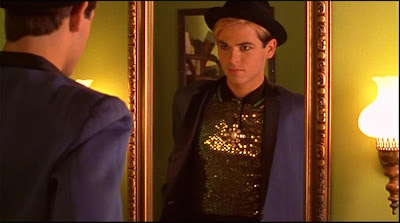 Let's end with some classic menswear and a song. 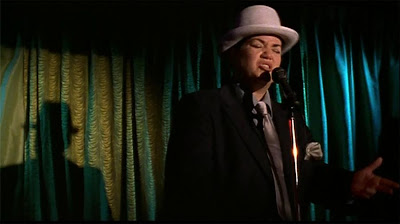 Email ThisBlogThis!Share to TwitterShare to FacebookShare to Pinterest
Labels: fashion accessories, gay, movie reviews you can use, the mooovies, time travel

Where do you find this stuff!? My favorite line:
I will never tire of this look
!!!