It's been ten years since Dig! won the documentary Grand Jury Prize at Sundance and bedazzled the world with its grainy brilliance. (It has a 90% approval rating on Rotten Tomatoes—that's a critical storm.) Some of you may have missed this absorbing portrayal of two bands who started out as friends but didn't remain so. And to you I say, check it out. It captures the hidden world of rock in all its unholy glory. If you have seen it, it's worth a re-watch. It's aged like fine wine (that's down to the dregs with a few cigarette butts floating in the bottle).

When we think about visions of rock & roll in feature-length form, The Song Remains the Same, Woodstock, Gimme Shelter, or Don't Look Back, may come to mind—films that were financed and produced because their musical movements had become or were in the process of becoming wildly popular. Dig! is the world of rock in the underground trenches, where bands trudge forth—lugging amps and guitar cases from dingy club to town-hall rec room, loading up a rattly old van in the middle of the night, eating substandard road food, and busking on the highways of America, where rock is not exactly dying, just sort of languishing at the moment.

At the time of its release Dig! got a lot of media attention, some might say at the expense of the bands it portrays. The most vocal critics being the bands themselves, the Dandy Warhols and the Brian Jonestown Massacre. In its narrative arc, the film casts Dandy's leader Courtney Taylor-Taylor as the corporate (if struggling) shill, while BJM's musical genius, Anton Newcombe is the violent artistic madman, sinking into the mire of drug abuse and general all-around abuse, causing his band to implode on impact. It's engrossing, but I can empathize with the bands' disgruntlement at their portrayals. No one wants to see their very worst behavior caught on film for all eternity—an award-winning film at that. It's damning.

With seven years' worth of footage to edit down, tenacious director Ondi Timoner had 2,500 hours to cull a theater-ready tale of the rise and plateau and fall and plateau of two unique and worthy-of-our-time independent bands. At the time of its release, critics appreciated this insider look the music industry—its hopefuls and its malcontents. The second coming of psychedelic pop-rock has come and gone (again—there was an initial resurgence of this genre in the early 80s—a "paisley underground," based on 60s-era garage rock of the "Nuggets" compilations and a combination of drugs, Reagan-era nihilism, and a appreciation for velvet pantsuits.). Why revisit Dig! you may wonder.

Like a big fat biography of its time, it's worth checking out every few years. Here's why:
Ultimately, this is not just a film. This is rock on film—a subject that's near-impossible to capture. Whether it's a fair portrait of its subjects or not, it reveals the last gasp of a bloated music-industry system and the bands who attempted careers within it. It's a story that's occurred countless times, but never on such a dry, bemused, you-are-there level. Some further thoughts, not in any particular filmic order will follow. And now: 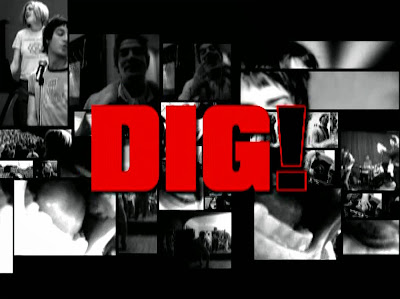 We begin with Anton Newcombe. His band, The Brian Jonestown Massacre has gone through something like 40 incarnations since its beginnings in 1990. A red flag. What keeps band members coming back for more musical mayhem is Newcombe's canny synthesis of 60s psychedelia with themes of alienation and mind expansion, and some great big guitar hooks. Back in the 90s, all his guitarists playing dark psychedelia together created an endorphin-releasing harmonic convergence.

I saw this particular lineup on several occasions and they were quite the group. Once before a show in San Francisco, they had a guy tuning an entire billiard table covered with their guitars before the show. Seeing all those guitars, including multiple twelve-strings, was almost as exciting as the show itself.

If Dig! is missing one important element, it's the thrill of a good BJM show. And all the shows I saw were really good. No ass-kicking, no bottle-throwing, no destruction—not as the movie would have you believe. But I have to admit, the first night I saw them play was when my band She Mob opened for them at the Purple Onion in North Beach and one of my bandmates saw Anton getting a blow job before the show, right on the floor in the back of the tiny basement club. I was already intimidated that they were named after both Brian Jones and the Jonestown Massacre (man, that's dark). Although my band was dressed for our own self-professed "fake glam" night, we were not prepared for the rock-style onslaught that was upon us.

Such was their infamy that when Anton asked to borrow one of our mic stands for his set, I must have looked momentarily unsure (normally when the headliner asks to borrow your mic stand, the proper response is to exclaim, "Sure!" and hand it over). "I promise we'll be careful with it and it won't be destroyed," he pleaded. He was so sincere in a sort of anguished way that I felt compelled to reply, "You better be careful because it cost us thirty dollars!" Instead of laughing at my cheapjack mic-stand humor, he looked at me like I was completely out of my mind. So let that be my legacy—I freaked out Anton Newcombe without meaning to. And they were very careful with our thirty-dollar mic stand. And played a damn fine show.


Meanwhile, over on the Dandy Warhols' stage, they're also reveling in the 60s in a poppier, brighter, more speedy way. The Dandy's are like the BJM's more popular cousins who get invited to all the house parties where jocks and cheerleaders mingle with burnouts and would-be intellectuals who just finished reading On The Road for the first time. They're more uplifting but conventional—fluffier. 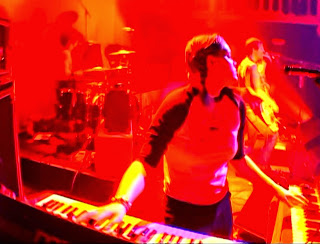 Singer/songwriter Taylor is a clever fellow but not quite as clever as he believes. I mean, look at this video set—just look at it. All the trappings of too much too soon. 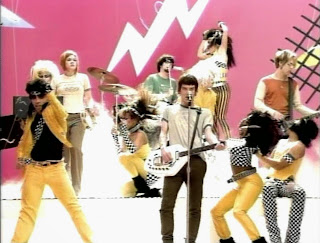 Here's the music video, with dancing syringes, for "Not If You Were The Last Junkie on Earth," a song that BJM (rightly) mocks outright. Just my opinion, but this was probably not the best use of Capitol Records' $400,000 marketing budget.


BJM guitarist and my personal style icon, Jeff Davies, asks at the video shoot, "Is this all for the Dandy's?" It's a pertinent question. 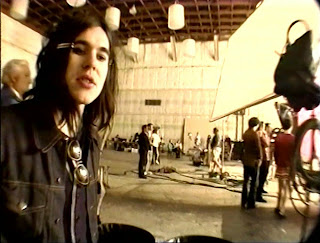 And it's contrasted with a BJM tour where this happens. It's the wee hours for what looks like four people at a hall used for hosting communist meetings, if I recall. Still the band plays on. They are professionals after all. 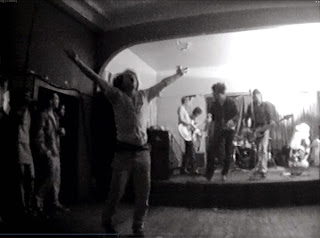 A fan-made video for BJM's "Anemone," from the Strung Out in Heaven album, released on TVT, a big deal that didn't pan out ultimately.

No matter how dry his narrative delivery, Taylor is obviously enamored with Newcombe's songwriting prowess. They start out as mutual cheerleaders but their friendship degenerates into a rivalry that turns toxic and nasty by film's end. 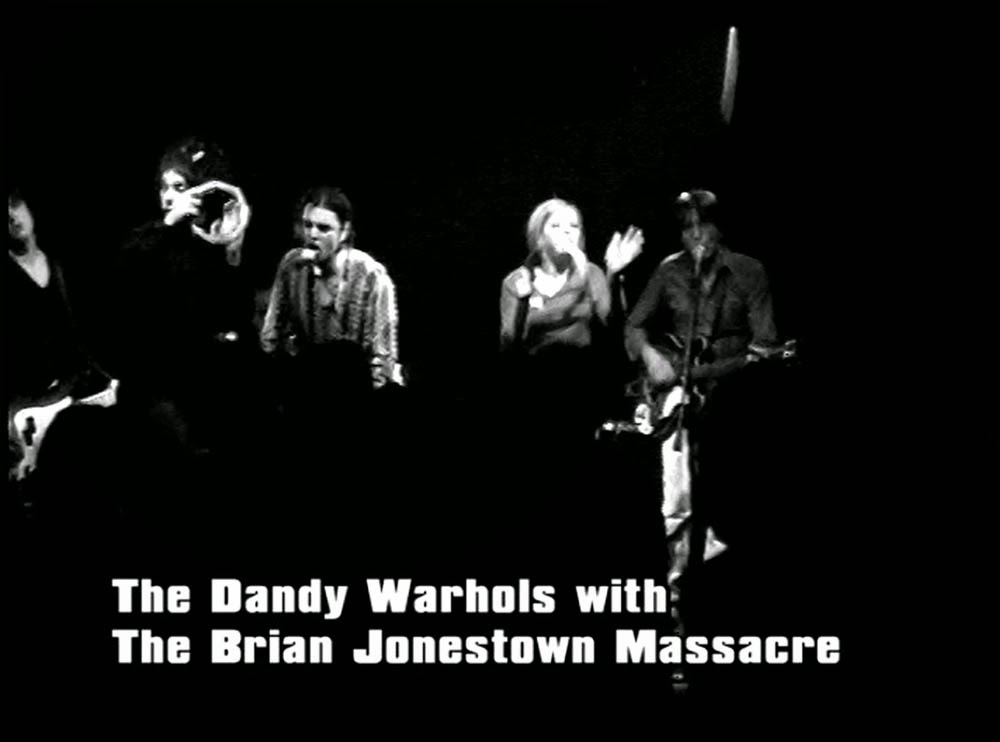 The BJM household in Los Angeles where Harry Dean Stanton shows up for a party. The following day (apparently) the Dandy Warhols, flush with record-industry per diem, show up for a photo shoot in the decrepit band house, mocking the abject poverty of its inhabitants who groggily confront their frenemies by cooly informing them, "That's not cool." 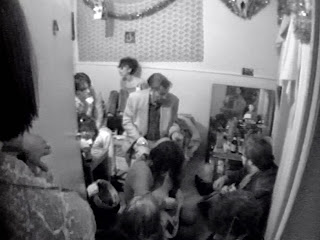 BJM lined up and grooving. 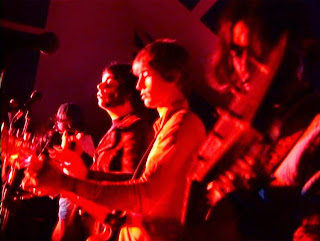 Stirring up a psychedelic stew. 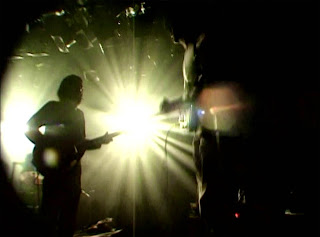 Have you ever edited a big video shoot? I helped edit an improvised drama once, shot on Beta (so long ago). There was about two hundred hours of footage to log, dub and condense down into a feature-length film that was not only cohesive but dramatically compelling. Even though the film got made, the goal was impossible. Timoner had seven years' worth of footage, 2,500 hours total. CAN YOU IMAGINE? That this film was even completed is a sort of crazy miracle. It's a good film too. Kudos. 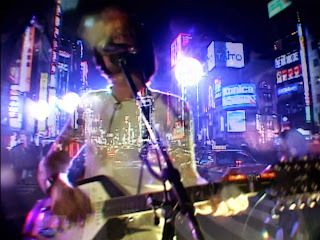 Anton and Joel playing the subways and streets of New York City before a CMJ conference. The Dandy Warhols meanwhile were struggling to sell albums in the U.S. but while touring, discovered that Europeans were going crazy over them. Perhaps the U.S. wasn't ready to go retro. Interestingly, Newcombe now lives in Berlin and tours on that side of the world in a successful manner. 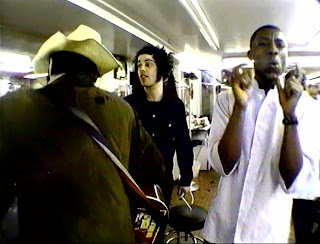 The BJM fight in front of record-label reps at the Viper Room in Los Angeles, blowing a chance to get signed to a big-time label. This was some Spinal Tap ultra-violence, ending in the infamous lament, "They fucking broke my sitar, motherfuckers!" Some might say Newcombe was more afraid of success than failure, drunkenly pummeling his own bandmates during a crucial show, but I think he was more interested in control. The ultimate control freak.

Genesis P'orridge has something to say about major-label industry executives. My favorite quote: "I dread to think what they're like in bed trying to have sex because, you know, their mind and body are not connected." 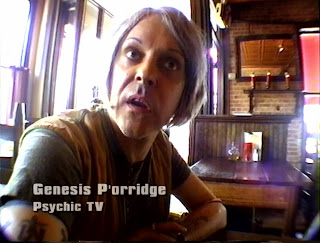 Jeff Davies is my spirit animal. Where are you, Jeff? Get back onstage already. 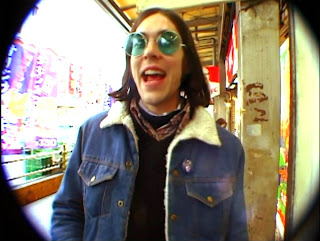 Just a little reminiscing with Joel Gion. He's a born entertainer and a damn fine percussionist. 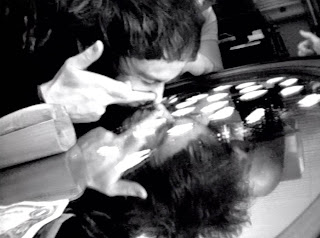 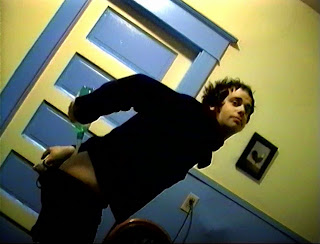 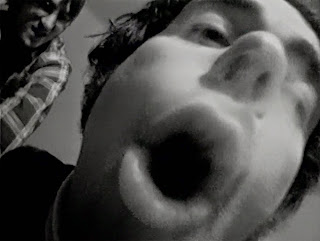 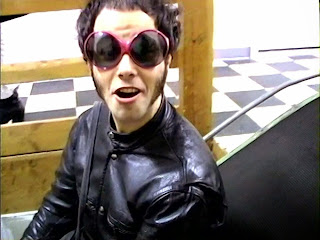 So where are they now? There's a bonus material DVD should you care, with more interviews a few years after the film. Everyone's alive, which is the best kind of spoiler, and marriages, house-purchases, babies, co-op music studio/brewpubs in Portland, second and third band formations were all on the horizon for everyone involved.

Ultimately this is a film about performance. Everyone in these two bands are performers to varying degree. They all agreed to be in the film, at least initially. They were in a sense performing for the entire seven years, no matter how forgetful or fuzzy-headed they may have been in front of the camera. Should they balk at Timoner's narrative devices? Had she let the 2,500 hours of footage unfold to everyone's delight, it would be a mess of a film. By crafting it as a band vs. band vs. music industry vs. inner demons, she gave us a universal rock film for the ages. All the messy ugly parts along with the harmonic clarity. The bands did the hard work and hard partying, Timoner gave them a story—maybe not the story they wanted or believed in, but it's a good one.


Bonus! Enjoy this 1999 band-therapy segment from VH1's "Rock Candy," hosted by Jim Gaffigan, featuring more delightfully dysfunctional footage of the Brian Jonestown Massacre working on their issues. My band and I made a special point of watching this—we were fans. Thanks to lovelykate for uploading this lost gem.

Email ThisBlogThis!Share to TwitterShare to FacebookShare to Pinterest
Labels: movie reviews you can use, the mooovies, the music is the message

I love the hell out of this movie. Have been meaning to get the DVD just to check out the 2nd disc, this has spurred me into action!

Enjoy, Grebo. I'm glad I was there, watching this unfold. The film holds a place in my musical heart. Youth's lost fervor--forever enshrined.