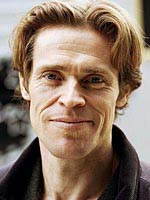 There's a lot of celebrity and movie-fandom blogging in cyber-landia, but who among us has paid homage to Willem Dafoe's hair? His luxuriant locks, such a contrast to his odd, rough-hewn Midwestern features (he was originally christened "William" just so you know), are such a gigantic part of his screen persona--weird character actor/weird leading man--that any time they are shorn, or covered, the film cannot hold up. That's my theory anyway. The mesmerizing quality of Willem Dafoe's hair is follicle star power that will not be denied. So directors, do yourself and your films a favor: heavily feature this man's hair. Women are jealous of it; men want some of it for their own. It catches the film lights so expertly. Where will Willem Dafoe's hair be in the coming digital age? We cannot know, but I'll be there, watching. 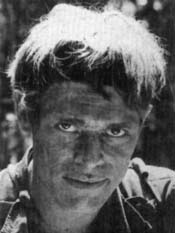 Platoon - Cast against type, Willem is the hero as his innocent, golden mane attests. See how it frames his cranium like a halo. A stunning debut by hair. 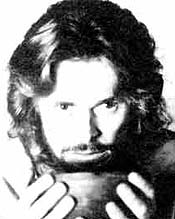 The Last Temptation of Christ - This Jesus is of the "shiny, wavy-haired" variety--the kind we baby-boomer Catholics grew up with. See how it flows from his forehead like a fountain of truth, beauty and moral fortitude. The shine reflects all the good that Jesus will provide for mankind. And if he happens to resemble a young man who attended junior high in Appleton, Wisconsin, just suspend your disbelief and check out those bouncy waves! 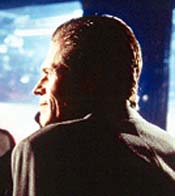 American Psycho - Slicked back and sleazy. Nobody's hair does it better. 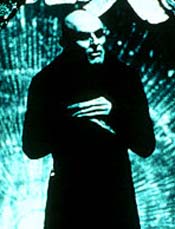 Shadow of the Vampire - I don't care if he was nominated for an Academy Award, there's no hair and that's bad! Really bad. I guess when you're playing Max Schrek you have to be authentic. He was one of film's all-time weirdoes (imagine), creating the memorable Nosferatu out of his own bizarre psyche, but it just hurts so much to see a bald Willem. Like Julia Roberts without the smile; Tom Cruise without the arrogance; George Clooney without the knowing smirk; Willem Dafoe IS his hair. Let's move on. 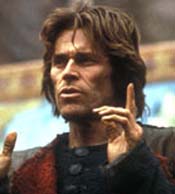 The Reckoning - I've never seen this medieval thriller. In fact, I haven't seen a lot of these films. I'm just reviewing hair. I'm going to guess that this hair represents an authoritative, slightly manic character with some dark secrets of its own. Secrets that will be revealed before the film's allotted feature-length scenario plays out. I do like the chestnut hue, but the lack of highlights is disappointing. Don't quash the highlights--I don't care if you're from the middle ages! I'm supposing this film failed at the box-office, but it's only a guess based on this layered look, which is more Mick Jagger than 14th-century England, unless Jagger stole his look from some ancient wood-cut or something. 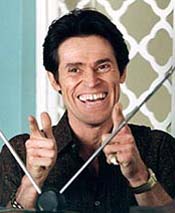 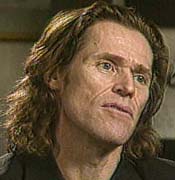 Affliction - Please, do not emotionally torture me with your dysfunctional addictions! Excellent wayward-son look. Kind of back to Jesus too. This tormented hair sure is pretty, and rather femme. 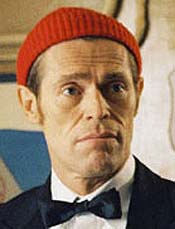 The Life Aquatic with Steve Zissou - No, no, no! Do not make Willem Dafoe wear a twee little beanie. Director Wes Anderson's arrogance is out of control if he thought the American public would be denied another fine performance featuring Dafoe's hair. This is like asking Nicole Kidman to wrinkle her forehead, or Scarlett Johansson to play a demure nun. It's just unfortunate. No wonder this film was a critical flop. 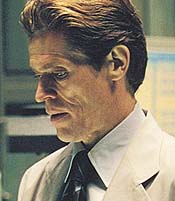 Spiderman - Bow down before my incredible body and shine, Peter Parker! Your sticky little webs are no match for my scientific know-how and big-hair bravado! My hairdresser comes straight to my mansion three weeks on the dot, and you can't even afford Supercuts super sale week! Plus I own stock in Clairol and L'Oreal. And your girlfriend Kirsten Dunst is not only not believable as a great stage actress, she has terrible hair! My afghan hound has more personal style... (Action sequence drowns out rest of dialogue). 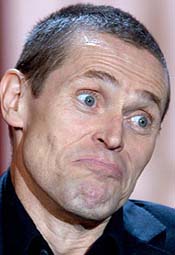 Hmmmm, what have we here? This buzz-cut can mean only one thing: eminent retirement. Say it isn't so Willem! Despite all my nitpicking, you really are a fine actor--an American treasure. Please don't give up. You've made over 10,000 films. You're the Joyce Carol Oates of filmmaking--don't leave us wanting more. I can't wait to see your hair fade into the sunset. Please Willem, I beg you, I need to see you go gray, gain forehead inches, maybe a tiny bald spot in the back--or, not. You might be one of those distinguished old guys with the snowy white hair. I just saw one on the 40th Street median strip yesterday, crossing over to Broadway. I nearly crashed my car, his hair was so blinding and it was held at the nape of his neck in a tiny, rebellious ponytail. Just consider it for some future role--I leave you with this: 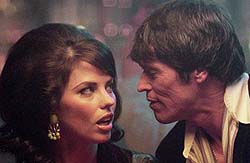 Get that awful hair away from me!
Posted by Miss Lisa at 4:04 PM

Ok. Do you have enough to occupy your time? You obviously spent waaaay to much time researching this. Or did his hair show up in a vision after a bout of bad tempeh?

No review of Wilhelm is complete without a quote from the band Bongwater's song "Folk Song". "It's much easier to accept Jesus Christ as your personal savior when he looks like Wilhem Dafoe".