"...like in real life, people were not to be trusted." 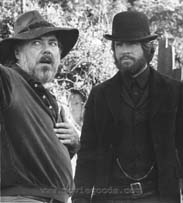 Robert Altman died. The film historian David Thomson has some good words about his career here (that's his quote in the title above). I've always been a big Altman fan, although I realize he's not for everyone. I love "The Long Goodbye." So dark, yet so brightly, strangely Los Angeles at the same time. I think that was Altman--dark guy, dealing with L.A. all the time. Did such a good job. Hail, hail American artist--you will be missed.

Here Altman directs Warren Beatty in "McCabe & Mrs. Miller," perhaps the all-time most cynical western ever. If you haven't seen this one, go on, it's good for you. And here is a photo of the town Altman had built outside of Vancouver just for the film (torn down 7 months later). Julie Christie as an opium addict: see it twice! 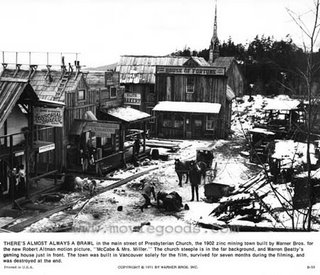