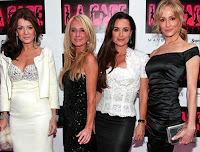 I hate myself but here's the half-ass recap of Real Housewives of Beverly Hills Part Deux (ode to Cedric). So I was really tired and getting over a cold when this aired on Tuesday and I was doing an art assignment in the dark of my bedroom the whole time--typical half-assed TV watching as usual.

The housewives of Part 2 were really shiny with lots of sparkly diamond-looking things around their necks, wrists and earlobes. I guess they were wearing the same outfits as last week, but I didn't even notice then because I was so busy yawning and reading a great book of interviews with comedians called Satiristas: Comedians, Contrarians, Raconteurs & Vulgarians

by Paul Provenza that is changing my whole existence and entertaining me at the same time. Not like this show, Bravo. Well, changing my life for the worse, I suppose. Where was I? Oh yes, bitching and complaining over my cable TV habit.

The show started off with NYC fight of the century recap: Kim telling everyone that Kyle had asked Camille a bunch of questions about going to Hawaii and was Kelsey going and so forth, and then Kyle just started crying. And Kim was all, "What's WRONG?" And then there was endless fighting and watching of softporn films starring Camille in her 20s and that sort of thing. So we'll never know what really happened between Camille and Kyle in New York. And perhaps we're all better for it.

There was some more Camille-shaming as she was shown in a hot tub in a sky-blue bikini, comparing herself to Jesus. If only Catholic Mass was more like that! Camille sheepishly said, "Uff, Jesus, right. Sorry 'bout that everybody."

On to Cedric-gate. It turns out that Lisa's permanently buffed and ensconced house guest Cedric was a conman, freeloader and overall despicable person. Of course, when Lisa's husband Ken calls him despicable in his proper British accent, it sounds like the worst thing a person could ever be. Not like when an American says it.

Anyway, the Vanderpump/Todd household had been asking Cedric to move out throughout the entire show but he kept bringing up his abandonment issues, even though he's close to 40 years old. A very beautiful-looking almost-40 but still... So even though he had to sleep between his prostitute mother and her boyfriends at the tender age of seven to "keep her from being raped," as he explained over Lisa's daughter's birthday dinner, Cedric had to go. Except he wouldn't. Lisa explained that she one day asked him to pick up his clothes and he freaked out, packed up, and ran off into the mean streets of Beverly Hills. He then insisted on meeting at Ken's office at dawn and tried to "get something from them" or he would "tell all." What a masher! And it turns out he does have family after all. 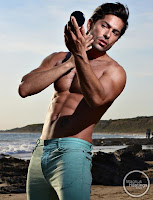 How could Lisa be so stupid? "I don't know, I must be stupid," she explains. Everyone had warned her about Cedric taking advantage, but I guess his abandoned-in-a-phone-booth-in-Paris back-story really worked on the Vanderpump/Todds, at least for a while. Well, it was interesting watching Lisa try to move her face to match her grief. I was rooting for her to make a proper facial expression and it almost happened.

Then Cedric had his say, interviewed in an unbuttoned shirt which made him look extra conman-like while at acting class. He says that he wasn't thrown out, he left of his own accord and that Lisa was really demanding and she would call him every morning to go work out in the home gym and he was basically her rent-free companion. Jesus--the poor man. And she's a big phony and she's hanging out with people who aren't even her old friends and just you wait, America, the real Vanderpump will show her true colors soon enough and he'll be vindicated. Then he goes back to acting class. To act. We'll miss you Cedric. Oh not really.

Who was next on the chopping block? Taylor and her despicable marriage to Russell. The implication throughout the season was that Taylor married for money and now she's miserable. She and Russell (can I just call him Asperger's Russell? I know that's offensive, but he seriously seems to have it) went to Mexico to work on themselves and they had talks. FASCINATING. They will stay together for the sake of their daughter, I guess. Taylor continues to look miserable. Russell looks blank and uncomfortable.

Intrepid host Andy Cohen then asks Adrian if she would set up one of her brothers with Kim. Adrian: "Eh, no. They're so busy and you're so stand-offish right now, Kim." Kim nods. Great. That wasn't humiliating in the least.

Kyle bullying montage: Kyle is shown throughout the season making fun of Kim's housing and cheese-buying choices. This escalates into accusations of craziness, drunkenness and a slap fight in the back of a limo with Adrian trying to run interference and a camera crew holding everything surprisingly steady. Very professional of the camera crew--I would have been shaking like a leaf in that limo of purgatory. So Kyle looks somewhat mortified while watching her tirade of evil while Kim, across the room crumples further into a Kleenex-dabbing ball. Kyle wishes she could take back everything from "that night." She trades places with Camille to sit next to her sister and while Kim says "I love you and want to work things out with you," Kyle nods but never reciprocates the love thing. She claims Kim never supported their family as she said that night. Oh, sisters. They're delightful.

Lisa defends Kyle and Taylor brings up Kim's drinking gain. Oh, friends. They're the best. Kim refuses to talk about "that night" or her drinking or anything personal. Well, that just proves she's crazy. If she won't admit it, she must be. It's Catch-22, reversed (Catch-44?) and you're living it, Kim Richards. Perhaps she should try becoming a satirist. There's plenty to work with here.

On to Camille's crazy dinner party with the sadistically drunken medium! You know that TV show that just got cancelled starring Patricia Arquette, "Medium"? Well, the real medium that the show is based on, Allison Dubois, was sitting right across from the Housewives at Camille's party, sucking on an electric cigarette and giving Kyle the what-for, I tell you. You missed it? It was the talk of the Internet, dahlings. But in my half-assery, I barely paid attention to that episode and missed most of the dinner party. Then the parts I saw were so excruciatingly uncomfortable that I couldn't bring myself to watch the whole thing. But basically Kyle demanded a psychic reading and Allison in her drunken craziness complied by saying Kyle's husband would never fulfill her and their marriage was doomed and she could tell when and how she would die and all kinds of cool futuristic things.

Then afer the housewives left, Allison predicted bad stuff for their children and Camille said that Kyle's hot husband and Grammer-realtor, Mauricio, had flirted with her. It was the dinner party of the century, dahlings! So back to the present day, Kyle thought she was set up and Camille denies that but thinks Allison was reading her future with Kelsey, like the psychic wiring of the night must have gotten mixed up over cocktails or something. And I think that's the best "read" of the whole show. Not that Allison was a fucking bitch from hell, but that she read the psychic signals wrong. Lisa puts forth her theory that she was a fucking bitch from hell (but in more polite terms) and we wrap up the show with regrets:

Yes, there were regrets, but what an experience, declares Kim. And what great new friends! The other housewives grunt in unison.

Do I regret recapping the final episodes of a reality show from wealthy-lady hell? No, I live for this moment. Thank you for sharing it with me. Cheers! (*holding up a mug of tea while doing spell-check*) Yes, this is truly living!

I made the effort and recapped Part 1 before I realized it was a two-parter. Otherwise, I probably wouldn't have bothered, dahlings.

Thank you Vulture for your helpful and acidic chronology since I refuse to take notes when I watch shiny-garbage TV.
Posted by Miss Lisa at 9:57 AM

I love Ms. Adreine Maloof, she is a class act and doesn't act as rich as she is. She is from my Home town Albuquerque, New Mexico and her family are very generous. Her father was a smart business man and made them earn everything they have. Very proud of all the Maloofs, Joe,Gavin,Phil,George and the prettiest...Adreine! Collen Maloof is a Great Mom as well...

Wow, it sounds so much better from your erudite summary than the actual hours of wasted time I spent watching it. I have deleted this from my DVR, I can't stand one more minute.

I need more "It's Always Sunny in Philidelphia" in my life :)