Movies You May Have Missed - "Smithereens" 1982

In her first feature, Smithereens, Susan Seidelman focuses on Wren (Susan Berman, who was first spotted in an off-off-Broadway theater audience)—one of cinema's true narcissists. Seidelman says in her DVD commentary that before any characterization was set, she always visualized the red sneakered feet of Wren, endlessly walking the sidewalks of the city—a sort of new-wave bag lady and hanger-on to a dying music scene. The film is a testament to Seidelman's artistic eye, which is definitely attuned to visual storytelling.

Why she chose such an unlikable character, she won't say. Smithereens is an unspoken criticism of the fringe dwellers of a scene, particularly when it loses its artistic edge and is about to turn into something easily commodified. In this case, when punk merged into new wave. 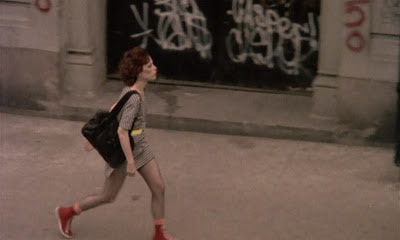 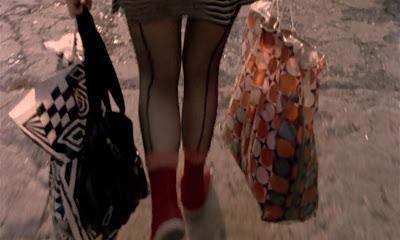 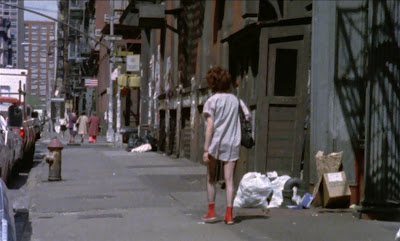 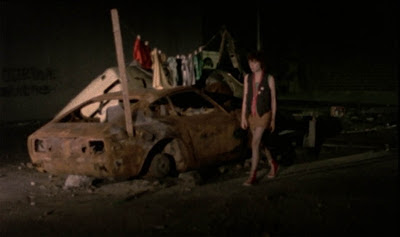 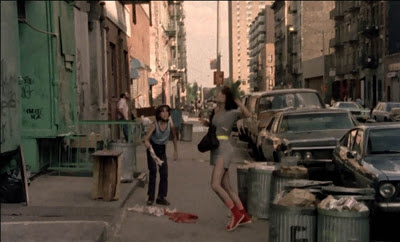 Wren isn't a successful hanger-on. She can't get any kind of action, not even the groupie kind. The musicians at the Peppermint Lounge won't put up with her, their antenna finely tuned to her parasitic type. Her sister's nightmarish family in New Jersey knows better than to loan her money. Her landlady evicts her for not paying her rent, and her co-worker won't take her in. Only Paul, passing through from Montana, living in his graffiti van before heading to the woods of New Hampshire, shows any interest in her before realizing he's made a terrible error in judgment. 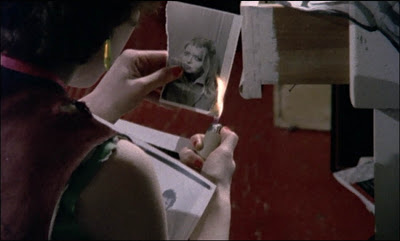 It's a bleak world Seidelman creates, despite the bright colors and youthful energy that fuels the underground. In the opening shot with no dialogue, with no faces in fact, Wren is cast as a petty thief with petty desires. Constantly in motion, seemingly going nowhere, Wren's search for a patron or cohort, or at at the least an acquaintance, is that universal and generally repugnant quest for fame—without noticeable talent or application. Plastering photocopies of her face throughout the subways and abandoned buildings of the city is her first course of action, until she can latch onto someone more successful. 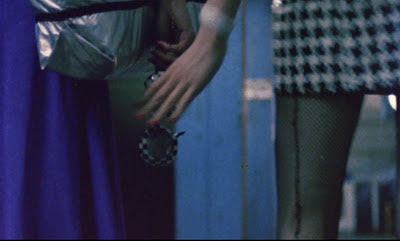 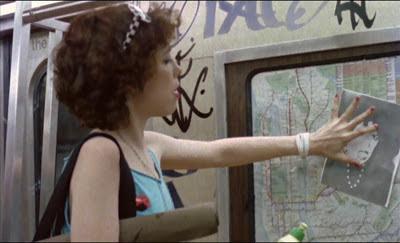 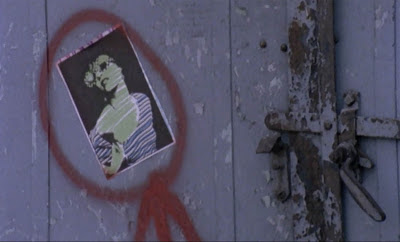 Enter Richard Hell as Eric, a musician trying to make a record deal in Los Angeles. Casting Hell in the film gives it some needed punch. Eric is every skinny, cute musician who not only can't be relied upon, but might actually land you in jail. Fighting the demons of addiction and punk-rock burnout at the time, Hell saunters through the artist's loft of his mind with mischievous charisma intact. In his DVD interview, he regrets playing such a money-grubbing user when he was a committed artist at the time, but the film would probably tank without his presence.

Everyone in the cast does a good job of staying in character—even after a long delay in filming (noticeable in Wren's altered hair lengths), but Hell lends an authenticity to the desperate Bohemianism. You can read more about Hell's musical contributions and how he voluntarily dropped out of the scene in his autobiography, I Dreamed I Was a Very Clean Tramp

. It will put you in the right frame of mind to commit artistic mayhem. 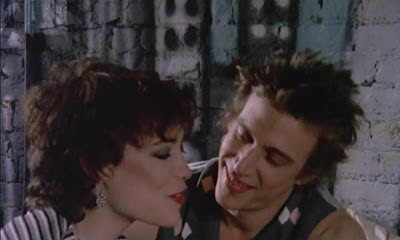 Wren, who Seidelman calls (without rancor) a cockroach, just keeps going, and will not be denied her dose of rock star limelight. Or so she hopes. Midwestern Paul stands by, sullen, while fending off prostitutes who are probably all better companions than Wren. Street pimps, creepy roommates, and assorted "it" girls pass through, adding their timeless ambiance to a vanished world. Most of us could now never afford to live in the neighborhoods shot on the sly in Smithereens, and that's my answer to the question: why watch it at all? 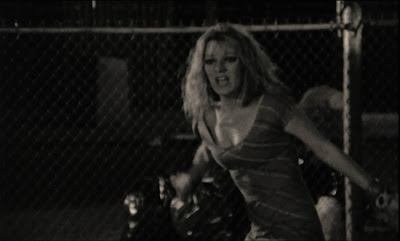 Seidelman was part of the 70s-era underground film scene in the city, where musicians and amateur filmmakers converged among bombed-out blocks of rubble and decay. It was an artists' paradise, if you could get the film lab to defer payments long enough to complete your project starring all your friends. And it's gone now, gutted for gentrification. 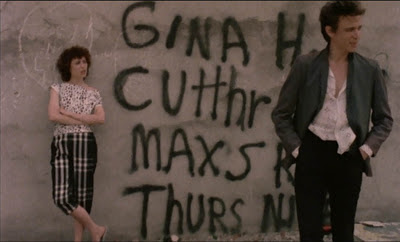 Another plus is that Seidelman had originally studied fashion design but hated sewing, and so ended up applying all her style to her new-found love of film. Smitherens is rich with images that can only come from an artist's eye. Every low-budget shot in this $60,000 feature is composed with color, texture and painterly qualities in mind. When I can't take Wren and her self-centered mind-set anymore, I just focus on her patterned, spray-painted world and I'm very content to do so.

Wren was inspired by Giulietta Masina in Fellini's Nights of Cabiria, and similar to Godard's rootless pop-culture protagonists in his early films. Seidelman's quirky new-wave character study hides an existential European sensibility in plain sight. Those expecting wacky hair-gel high-jinks—this is not the film for you. Those of us who came of age in the late 70s and early 80s—maybe we've misremembered the bad times in that foggy neon glow, but here they are, for your consideration. Smithereens was the first independent film to go to competition in Cannes, setting a precedent and launching Seidelman's career. Here's to her tenacious independent vision, and that wonderful, stylistic eye. 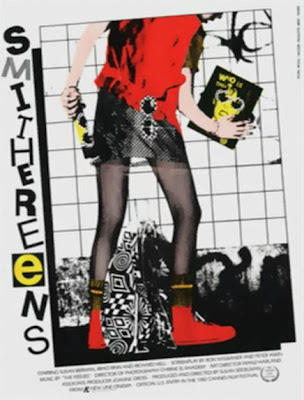 The trailer features some of the Feelies-heavy soundtrack. The Feelies' consistently nervous rhythms connect us with the year 1982 and Wren's restless search for something outside herself.

Email ThisBlogThis!Share to TwitterShare to FacebookShare to Pinterest
Labels: art for what ails ya, movie reviews you can use, the mooovies, time travel, uncool girls