David Bowie, known for many a fine grand entrance, is gone. We mourn. He leaves behind a huge artistic legacy, including his many fashion looks, imitable but never to pack the punch of their initial impact on our senses. Someone dressed as David Bowie will always be someone dressed as David Bowie and nothing more. Maybe that's why so few celebrity-types have attempted it. They're all busy trying to fly their own freak flag and good luck with that.

Still, let's enjoy some celebrity David Bowie cosplay. This was going to be a tossed-off post while I figure out what I really want to write about. It's become more of a David Bowie fashion rabbit hole and I'm just not prepared to go there. It would take years to properly write about Bowie's world of characters and the clothes they wore and the people he collaborated with to achieve those goals. This is not that post.


Currie related to Bowie as a power symbol after she experienced a traumatic incident as a young teen. 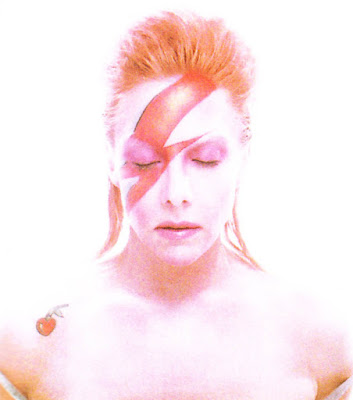 Kate Moss, who was Bowie's friend, wore his actual Ziggy Stardust bunny-rabbit playsuit to collect his 2014 Brit Award as best male singer. She looks great. But she could make a frock made of dish rags look stunning. Best to leave this look to the professionals. 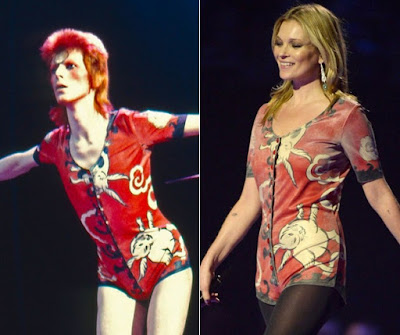 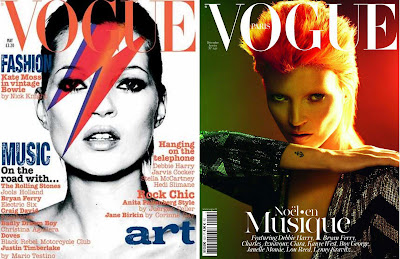 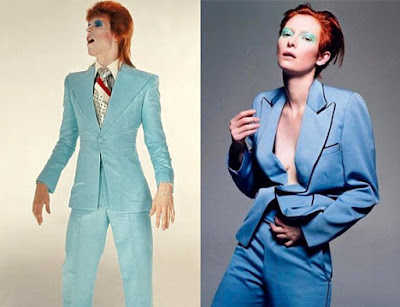 Jean Paul Gaultier's 2013 spring/summer ready-to-wear show featured a slew of pop-music characters you may recall—most from the 80s, and one design based on a 70s' icon.

And finally here's Lady Gaga Exposed's channel's SUPER-INTENSE look at everyone Lady Gaga's ever copied (or paid homage to, depending on your reading of her multiple ch-ch-ch-changes), including Bowie, but just about everyone else on the planet as well. This took a lot of research and features one INTENSE techno track, so give it up, for "Lady Gaga Copies/EXPOSED/Grammys 2010."


And if you'd rather listen to something else while watching Lady Gaga copy or pay homage to everyone who's ever existed, here's an alternative soundtrack to play. Don't say I never gave you options.

Email ThisBlogThis!Share to TwitterShare to FacebookShare to Pinterest
Labels: art for what ails ya, cool girls, cool guys, fashion accessories, the music is the message