What We Do in the Shadows arrived from Netflix, causing me some puzzlement—a vampire film I had put in my queue, but why? There are so many vampire films. At this point, without making a grand announcement, I had quietly retired from watching any more. Upon reading the Netflix envelope summary, I realized that Jermaine Clement from the charmingly deadpan HBO series "Flight of the Conchords" was a co-writer/director/star in the ensemble cast of New Zealanders—therefore, this was comic in nature. But who I wondered is co-writer/director/star Taika Waititi?

After finally watching this pseudo-documentary of New Zealand's underground world of irritable vampire housemates, I'm pleased to report that Taika Waititi is my new favorite actor/director. He's known in New Zealand and on the festival circuit for writing, directing and starring in a truly wonderful semi-biographical film called Boy, which I'll write about in another post. But since my introduction to him was this accidental DVD rental and it's almost All Hollows Eve, here's a brief review of this clever, dark and mirthful character study. If the characters happened to be creatures of the night. 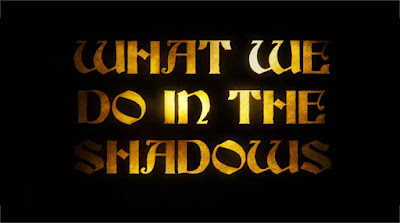 An anonymous documentary crew is given safeguarded permission by a Wellington household of vampire roommates to film their undead lives, the highlights and petty squabbles. I know what you're thinking: oh, another one of these mockumentary things. But this is a clever film, so go with it—it works.

Waititi is Viago, a fussy but good-natured dandy in a ruffled blouse who would like his vampire friends to honor the household chore wheel at least once every five years. Which is imperative as he has the unfortunate habit of hitting messy arteries when he brings his dates home. He leads us through his shadowy abode, introducing us to his roommates.

There's Deacon (Jonny Brugh), the "bad boy" of the house, who refuses to wash dishes or pay rent.


And Vladislav (Clement), a "bit of a pervert" with a torture dungeon who's lost some of his vampire mojo since battling with his nemesis, known as "The Beast."


And the basement-dweller, Petyr (Ben Fransham), who, despite his bucktoothed fangs, is scary as shit. "There's a lot of stuff down here," coos Viago, delicately stepping around the bloody debris strewn about Petyr's horrific lair, "Oh, a spinal column!"

Also of note, Jackie (Jackie van Beek), Deacon's aging human servant, urgently vying for immortality because she argues,"At this point, I'm the best I'll ever be." Deacon makes vague assurances before sending her out to get his dry cleaning.

Dumb bloke Nick (played with deadpan genius by Cori Gonzalez-Macuer) shows up for a dinner party of would-be virgin victims. The blend of horror-comedy becomes much more acute from that point on.


Nick and his ever-present and even more deadpan friend Stu, a systems analyst, change the centuries-old household dynamic, bringing it into the modern age. Suddenly local nightclubs full of drunken dancing youth are available due to Nick's doorman connections (doormen who wouldn't invite the vampires into their clubs had previously stymied former attempts at wild night-life in the worst way). Stu brings technology into the house, introducing the New World to the Old. And a host of quick gags involving our stupid online obsessions.

But Nick's thoughtless man-about-town presence is disruptive, as anyone who's ever shared living quarters with insecure misfits will recognize. The unity of these dopey blood-thirsty sociopaths is threatened.

The offhand tone of this supernatural world is a fresh look at our collective vampire-film consciousness. Scenes of Old World demons struggling through social mishaps in modern-day Wellington were improvised from a script by Clement and Waititi, and edited down to its comic essence to create an absurd but believable world unto itself.

I'm enamored with the visual effects that never call attention to themselves other than to enhance this comic world. Vampire arguments devolve into brutal battles splaying over all surface-areas of the house, even involving aerial maneuvers in the silliest possible configurations. And yet the darkness, the blood, the shrugged-off homicidal tendencies, the macabre montages of historic monster illustrations set to a musically knowledgeable soundtrack, make for some genuinely scary moments before another well-timed gag kicks in.

If you're a Shaun of the Dead / American Werewolf in London kind of horror-comedy appreciator, then you absolutely must see this film. I insist. 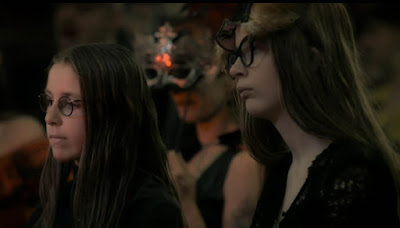 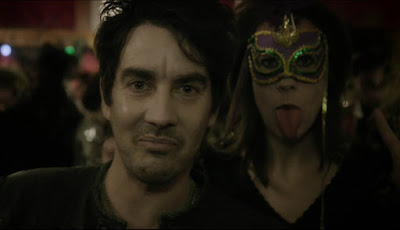 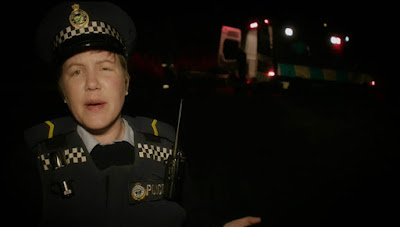 A gem of a vampire comedy. 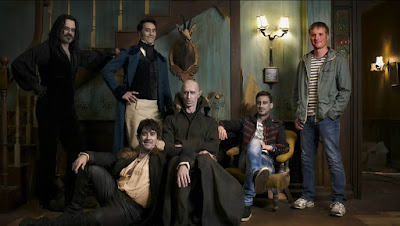 Email ThisBlogThis!Share to TwitterShare to FacebookShare to Pinterest
Labels: comedy jokes, cool guys, movie reviews you can use, the mooovies