"I just saw the stupidest movie," my Mom reported while giggling during one of our frequent phone calls. I sat up at attention. My Mom picks good stupid movies. "Kings of the Sun, starring Yul Brynner and George Chakiris,"  she continued.

"Kings of the SUN," She continued.

I'm bad with names. And I had never heard of this movie.

"It's about this Mayan tribe and they sail to America and Yul Brynner is a Native American and they get attacked by another tribe and the warriors hold their swords above their heads during the entire fight scene. I couldn't stop laughing," she said.

"The Sun Kings?" I was so perplexed. Not only from her description, which made it sound like she was hallucinating on prescription drugs (note: my Mom has been clean and sober from birth), but I've been watching (on purpose) bad films for decades. I'm a real bad-film junkie, and I was completely going blank on this one.

And it was about Mayans? Where have I been? I've been to Mayan country. I have some kind of indigenous background in my genetic brew. And there's an awful Hollywood epic about Mayans and Native Americans that takes place before the European conquest that I've never heard of? How did this get green-lighted?

I had to see this film. Tippy-type went my fingers onto the computer keyboard, and sure enough, Netflix carries it. Oh, thank the Gods of DVD distribution!

I'd love to review the super-bad Kings of the Sun, but it's dull. So dull, that you don't need to know. What is not dull are the hats. Someone over at United Artists costuming had herself a ball, designing this Mayan (and indeterminate Native American) headwear, and it shows. So I'm going to celebrate this dubious but entertaining concept. If you've looked at as many Mayan glyphs as I have, seeing a 1963 Hollywood rendition of that is darn entertaining. Bad, but in a good way.


Pretty much all you need to know is in the trailer. George Chakiris is stiff-as-a-stone-glyph Mayan Emperor, Balam (Balam?). Half-nude Yul Brynner poses up a storm as Chief Black Eagle, from an indeterminate Native American tribe—some kind of blend of Iroquois and I don't know...Plains Indian perhaps? There's talk of hunting buffalo, they live in tepees, yet they're nomadic and are camping out somewhere near the coast of what will become Texas or perhaps Mississippi.

It's pre-Spanish conquest, so it's pre-horse days. You try hunting buffalo in the southern gulf without a horse. Plus everyone speaks English and understands one another perfectly. In fact, aquamarine-eyed Shirley Anne Field, as fish-mongering Princess Ixchel, speaks with a mellifluous British accent.  It's all very confusing!

There's some Mexican extras in the crowd, but most of the leads are played by guys who look like they were taken off the line of a Midwestern meat-packing plant, their skin coated with enough bronzer to fill to Gulf of Mexico. The love triangle is conceived as a would-be soft-porn prisoner/nurse-mate scenario between gleaming Brynner and somnolent Field, with the wooden Chakiris wandering about, like he could really give a shit.

Perhaps journeyman director J. Lee Thompson might have directed the battle scenes differently if the metal swords of the opposing tribe didn't flap around like cardboard covered in tinfoil. But having the soldiers hold them high overhead was not the best creative choice. There are some flashes of an attempt to parlay fictional history into something riveting. But if the hats are the best thing going in your movie, you need to step it up a bit.

Mostly you get actors standing around, wearing ridiculous costumes and hairstyles, robotically intoning dialogue as if they had wooden swords up their butts. And what dialogue! Prepare yourself for conflict consisting of: "But why do your soldiers take our fish?"

The crux of the matter is this: will the Mayans ever learn to stop building pyramids in order to sacrifice their own for the Gods? Will the tribe living near the Mississippi Delta teach them a better way? I don't know because I'm too busy enjoying the psychedelic hats. And now, the headwear of:

We're off to a good start with these high priests atop the pyramid at Chichen Itza, looking just like it does today. This was before CGI, of course. And apparently before United Artists would OK the matte-painting budget. Look at these guys—they're trippy all right! The big teamster on the right has a tongue sticking out of his chapeau—he must be the king.

Here, you got your priests...

You got your main priest, waving his stone phallus around a human-sacrifice-to-be.

It's time for some human sacrifice, or the crops won't grow. Very serious now. Ha ha ha! Look at that priest on the right—he's got a manga frog-thing on his head.

Close-up. Whoa—dude on the right has two faces on his head. The left—some kind of Mr. Toad situation. This is some crazy shit on a pyramid. 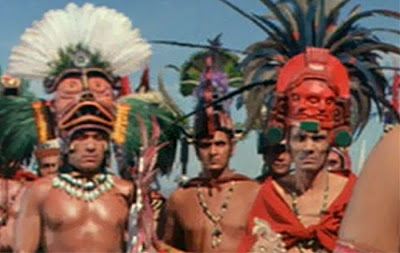 Bunch of worshipers down below. They could use some help with their crops, it appears. That low visual-effects budget makes it look like the great Mayan Civilization settled in the middle of Burning Man, like a bunch of dummies.

Poor Richard Basehart as Priest Ah Min! (In the man-bun.) Give everyone an award for staying cool during this scene with its inane ponytails and bouffants! Multiple takes of laugh-filled bloopers must have taken up the entire shooting day.

Warriors with flower-pots on your heads, attack!

Flower-pot warriors search in vain for secret passageways. You will never find your quarry, and your botanical warrior-garb makes you the laughing-stock of the Yucatan Peninsula!

Uh-oh, here comes Leo Gordon as the bloodthirsty Hunac Ceel, commanding the smurf on the left to water his flower-pot warriors.

Did I say pre-Hispanic? The blank eyes of Shirley Anne Field beg to differ.

Oh, shit—Hunac Ceel is back to settle the score. He commanded his vast army of flower-pot soldiers to sail across unknown seas to kill Balam and let everyone else go. That makes a lot of sense. But the guy is wearing a LEGO lizard on his head and some kind of plasticine tile-work for armor, so logic is not of the essence.

There are many priests with hats again!

Phallic scepter coming for Yul Brynner now. Note the gentleman behind Bryner is in a band called El Devo.

And keeps triple-face priest at bay with a "look at this fucking hipster" stare-down.

More awards for straight faces and Xychel's Betty Page look atop a make-shift new-world pyramid. And hey, let's hear it for foregoing human sacrifice, ladies and gentlemen. Was all that voluntary bloodshed really necessary for your crops after all? Balam doesn't think so and convinces everyone to agree with him. That's why he's king! A very silly looking king!

Swords of metal! In the air! For the entire battle!

We end on a fashionable note. King Balam is dressed for success in his chic jaguar cape. What do you think his armor is made of? Non-slip bathtub-mat was my first guess. Recycled inner tube? Shrinky dinks? Pure pleather from the Mines of Moria? Let the speculation begin!

Email ThisBlogThis!Share to TwitterShare to FacebookShare to Pinterest
Labels: fashion accessories, movie reviews you can use, the mooovies, What the

Gif of the month