From the Department of Bad to Worse - Tonto Smurf 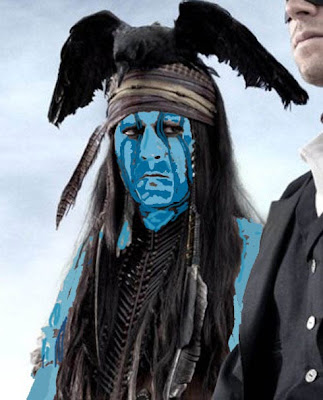 Yes, the cards were stacked against this one. And then The Smurfs 2 came along, and turned the cute little patriarchal caricatures into box-office poobah. This, after the first Smurfs movie brought in hundreds of millions. Hundreds of millions, I tell ya! I just thought...well, I can't make things any worse, can I?

What if...hear me out...Johnny Depp in The Smurfs 3 - Redemption. I think he's ready to stretch his costume and makeup choices in the ultimate role, as Tonto Smurf. He doesn't need the Lone Ranger and no one cares about the Lone Ranger anyway (industry executives, make a note of it). He just needs a bunch of CGI pals to have adventures with. The sidekick gets some sidekicks. It'll bring in the patient Depp fans that are still out there, plus the kids, plus the kids' reluctant parents. The Smurfs can teach Tonto Smurf how to use pronouns and he can help them blow up trains.

Yes, it's deeply offensive. But so was that bird on his head. That was so unnecessary. Unnecessary, like a $250 million remake of The Lone Ranger.
Posted by Miss Lisa at 6:29 PM