Acquanetta - not to be trifled with 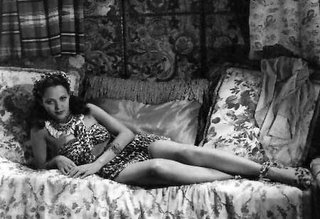 Here is a fine photo of Burnu Acquanetta, also known as the Gorilla Girl in the Hollywood extravaganza "Captive Wild Woman." Burnu Acquanetta was in reality Mildred Davenport, born in 1921 in Ozone, Wyoming; a young model blessed with (by Hollywood standards) exotic good looks. Although she was part Arapaho, Universal Studios gave her the title, "Venezualan Volcano." She went on to star as the Leopard Woman, the Jungle Woman, and the Gorilla Girl in a series of "B" films, mostly in the 40s. She died on August 16, 2004 from complications from Alzheimers.

Although her Hollywood career did not take off as her publicists might have hoped, I must admit that I find her classic Hollywood studio story fascinating. In the 40s and 50s dark hair plus light skin = some sort of half woman/half animal I guess. Having dark hair and light skin myself, I grew up watching old movies on our black & white TV when I was little and by the time I was four, I was convinced that dark hair meant: evil. Blonde hair: good. So I figured I would simply become blonde when I grew up, because I knew I wasn't evil. What did I know? I was four.

I can't help but wonder what it was like for all the dark-haired beauties of that era who actually played those evil, exotic, sexy creatures; the ones who lured the upstanding hero away from his blonde good-girlfriend, and usually ended up dead or exiled by the end of the film. It must have sucked! But hopefully the pay was good. And I don't know, playing the villain has its moments I'm sure, but every single role?!

So here's to you Burnu Acquanetta/Mildred Davenport. You quit the movies to move to Mesa, Arizona, had four boys, and published a book of poems. You leveraged your beauty and charm to raise money for many worthy causes over the years and although I've never seen your films and I'm not even sure if they're available on video (forget DVD), I admire you from afar, if only for your leopard-skin bikini and photographic dignity. That's a slam-dunk in my book.
Posted by Miss Lisa at 3:19 PM

Interesting when stereotypes reverse to polar opposites. Both ends seem to be an illusion. It's an interesting possibility.