Hey guess what? We live in the age of advertising. I'm sure in ancient times there were the

publicity men who painted the signs for Akbar's Tofu Hut and placed them along the mountain path, but today we are bombarded with ads to an alarming degree as never before. Because our eyes, ears and senses are ever-alert and tuned for survival (innately at least) we cannot help but be affected by advertising.

How to distinguish your brand from all the rest? Why not create the perfect icon to represent everything that is good and wholesome and suave and beguiling about your product? You can love or hate advertising icons but you can't really be indifferent to them. They exist to enter your mind and stay there, either by some unusual physical trait, or a catch phrase, or a jingle. Some will be more welcome than others. Elsie the Borden Cow will probably never outright offend anyone with her smiling cow face. The partying breakfast elves Snap, Crackle, and Pop are pretty inoffensive. Who could hate their good-natured rivalry and crackling product made of rice? Or the Gerber baby? So innocent and timeless with its little open mouth, awaiting nourishment.

But some icons are truly hateful. It's not that they're overtly obnoxious but there's something despicable about their role in advertising. They represent to me all that is pushy and invasive in the psychology of product branding. They are designed to manipulate at full-throttle and there is usually no escaping their presence until mercifully, someone at the company pulls the plug. But by then--it's too late. The icons have invaded our consciousness and we cannot shut them out completely.

On the soft side of hate is Snuggle Bear. At first you may wonder, ho 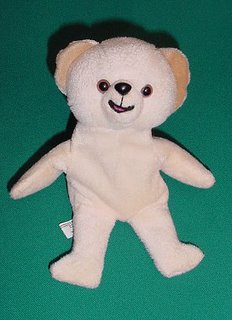 w can you despise the Snuggle Bear? Isn't he cuddly and fluffy and presumably nicely scented? It's not the image that offends so much. That slo-mo backwards dive that he used to do into the fluffy towels at the end of his commercials is even kind of cool. It's the voice. The voice of Snuggle is high-pitched and REALLY CUTE. And one step removed from softly hissing Satanic crooning.

Get back Snuggle Bear before I disembowel you with a pen knife! At least that's what I've thought in the past upon hearing a Snuggle commercial. Even if you turn the sound off, he's still pretty creepy. He's recently been spotted bouncing up and down in a field of flowers. It just doesn't look like anything you'd ever want to see in reality. And if you did, then you'd surely know you were losing your mind, or had been dosed with really bad drugs. And if Snuggle happened to come running at you in a field of flowers, or pop up from your laundry basket, you'd definitely tear off screaming in the opposite direction. Teddy bears are not supposed make any sudden moves or croon phrases that invoke anything other than security. 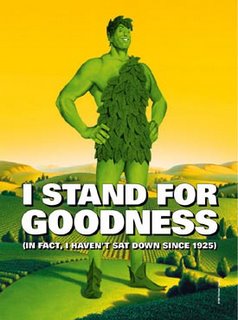 Way over on the other end of the spectrum lives the Jolly Green Giant. He's big, green, and doesn't have much to say. He's wearing a hat and a toga made of leaves. And he's just creepy. He's another nightmare-like vision that someone back in the depression thought would make a great spokesperson for peas and other items from God's green Earth. Even though he only says, "Ho ho ho," and seems to be perpetually standing in the same valley, year after year, I find him threatening. That wide-legged stance with hands on his hips. I guess he's supposed to look confident and instill confidence in you, the canned-food buying consumer. But he's so very green! And he's not expressive enough to make that somehow seem OK. He looks radioactive and as likely to squash you underfoot as sell you some spinach. HO HO HO! (squish!) Green Giant.

In the 70s, Green Giant introduced Little Green Sprout, his non-threatening side-kick who was round and cartoony and the size of a child. Green Sprout has yet to emerge from the Giant's shadow, which is really long, especially at sunset. Gaaaah! Wake me up from this vegetable nightmare!

Into the deep pockets of hatred I reserve for ignorance and sociopathy lives Joe Camel. He's been retired, presumably because he was a cartoon figure that catered to children, the future smokers of the world, but my theory is that he just failed as an icon all around. He seemed to be around forever even though it was only a decade throughout the 90s, but R.J. Reynolds spent millions to implant him into our psyches and there he has stayed. 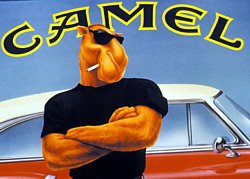 Is it is overtly cool persona? His penis face (or literally his fuck-face)? His weird construct: cartoon character/hipster adult with a camel head? What is so hateful about Joe Camel? I think he's just really ugly and gross. And I think most kids and adults would agree with that assessment and even though sales of Camels went way up during his tenure, I think people thought he was ugly and gross the entire time we were bombarded with his billboards and magazine ads and posters. I don't know what made everyone buy more Camels. I think Camels were just the alternate brand you smoked other than Marlboros, whose "Marlboro Man" made that company trillions in profits. If you wanted to be a hipster, you grabbed your pack of Camels and left the highschool crowd behind. You don't smoke 'em because Joe Camel is so cool, because he's not. He's ugly and gross. And he's mercifully gone from advertising but not from our collective unconsious, where "cool" guys function as tools to make us all a little bit more insecure about ourselves.

So finally, on to Ronald McDonald. I'll be brief. He has a condiment face. He looks like he's made of mustard, ketchup and mayonaise. That's unappealing. He's obviously a fat and salt pusher to little children. That's appalling. And for several years now he's become really "cool" like Joe Camel, but for kids. He skateboards and plays soccer and shoots hoops. You could say that the geniuses behind Ronald McDonald just want to atone for all the obese children they've helped create through their ad campaigns, and are now featuring an active and healthy clown, but come on--he's a CLOWN. Clowns are supposed to be funny and subversive. They pull tricks and are slightly scary (or downright scary, depending on the clown). Some are lyrical and artistic but Ronald doesn't fall under that category. He shills burgers and fries with his condiment face and doesn't really stand in for the healthy active lifestyle that could save so many children from a lifetime of suffering with diabetes and heart disease. He's a villain in make-up and I wish he'd go away, but not in my lifetime, or yours, or yours, or yours, and so on into infinity. 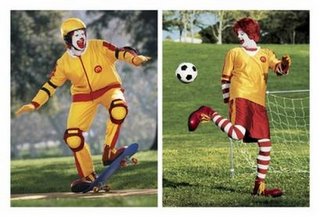 Kids: this is NOT COOL. Your first instincts are correct. This is ugly and gross.
Posted by Miss Lisa at 8:54 PM

I always thought the green giant was kind of virile and strong. I was always curious about the peas in his pod.