The Replacements: All Over But...

Quick read: The Replacements: All Over But the Shouting: An Oral History

by Jim Walsh. Oral histories are not always the best way to go. Would it have killed Jim Walsh to include a little editorial commentary per chapter to give us a sense of the times that The Replacements were shouting about? How about a discography? Or even a few photos of the actual album covers, since they're heavily featured in the book? In these regards, the book is a little too cool for school, which is the philosophy (along with massive drug and alcohol consumption) that hastened the disintegration of the classic 80s garage band. They actually rehearsed in a basement, which you can kind of hear in their beer-soaked, ashtray-scented sound. 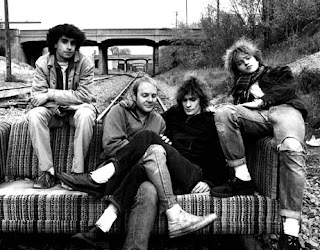 Oh well, I tore through this book like a speed-reader, or a reader on speed. Too many memories of "I was (insert place, time, age) when I first heard the Replacements," are included, and nearly nothing about the early upbringing of the 'Mats (unless you want to know the birth weight of the Stinson brothers). People (and editors, wherever you are): we really don't care. I don't remember where I was at all at that moment in time. Probably in the bowels of SF State U.'s basement where our college radio station played this dirty-sounding rawk day and night for a few glorious years. Or probably my friend Alan Korn told me about the Replacements, just like he told me about Nick Drake and The Plastic People of the Universe. If you wanted to know anything of musical importance in the early 80s, all you had to know was Alan Korn. I did learn from the book that these guys grew up in a Catholic neighborhood and that Paul Westerberg attended Catholic schools right up until he co-founded the band at age 19. That explains a lot (to me, anyway).

I clearly remember the Replacements shows in San Francisco. I got yelled at by a Bill Graham goon once at the Fillmore for dancing on a table. "Hey!" he bellowed incredulously. "Get DOWN from there!" It seemed like a natural thing to do at the time. Maybe it wasn't allowed in the balcony; lawsuits and things.

That was the night I later found out that a former bandmate of mine had sex with Bob Stinson in the supply closet of the dressing room. I had seen Bob leave the closet, sweat-drenched and wearing a man-sized diaper, making his way toward the stage, but no one else in the room looked twice at him. I just thought he was doing coke. Well, it was quite an evening. Tommy Stinson and I nearly ran into each other while crossing paths in a darkened hallway and we did a double-take when we realized we both seemed to be wearing the same shade of red lipstick. He was so much better looking in it than I, of course.

They used to play at the IBeam on Haight Street too. Those shows were more intimate. And weird--the IBeam was a combination 80s dance club/indie rock hangout, full of gigantic revolving disco lights that hung precariously from the ceiling. These always looked out of place during Butthole Surfer shows, but I digress. Paul Westerberg was often hanging out at the bar, and drinks went all around, especially if you were a tall, willowy blond, sitting nearby (I wasn't; not even).

I guess my point is...what is my point? At that time, during the Reagan reign, here was a group of Midwesterners yelling: This society is so full of shit--we have no place in it! Yet they yelled, not in anger (like all the little punk bands that we lost interest in, long ago), but with a sense of bemused sarcasm. And a delicate hope for some kind of human connection. That describes my state of mind in the early 80s, especially working in jobs, pre-Internet (oh, the humanity). They used humor as a weapon and a shield and numbed themselves with more substances than I could ever keep up with. They were supermen with instruments, who, of course, could not endure their own personal problems, or their anti-corporate stance. That's why Paul Westerberg is currently writing ad-copy for Intel. Kidding! He's a solo artist. And he's the reason people still care about the band. He couldn't have done it without their camaraderie and the gonzo guitar of Bob Stinson, but basically his songs and outsider vision have influenced a lot of people.

Here's some old and later stuff. The fast and furious live show is from 1981(!) when they released their first, album, "Sorry Ma..." The more commercial video was made for MTV. MTV just loved that sort of thing.

Find more artists like The Replacements at Myspace Music

Find more artists like The Replacements at Myspace Music

Goddamn Job and Junior's Got A Gun


Bastards of Young video is critiqued.

Email ThisBlogThis!Share to TwitterShare to FacebookShare to Pinterest
Labels: reading is free, the music is the message

great post. i totally agree about the book. for a story supposedly about outsiders, i felt like the outsider while reading it. i don't care what the fuck these other people were doing. i want to read about the BAND