No one was more shocked by the success of The Brady Bunch than Robert Reed. He had taken the job of Mike Brady, thinking the show—with its cornball sentimentality and sophomoric humor—would be cancelled immediately. Instead he was forced to play the Brady patriarch for five seasons of polyester-clad purgatory, plus sequels and variety-show embarrassment for years to come. He didn't know the power of the tail-end of baby boomer mass viewership. But we're not here to ponder Robert Reed's economically motivated thespian hell.

This is a second-season look into the dark psyche of the only member of the bunch who's considered to be somewhat of a misfit. If she had been born a few years later, she might have expressed her inarticulate disgruntlement while living amongst the cheerful middle-class suburban bourgeoisie with the angry sounds of punk rock. I'm talking about Jan, of course, would-be dark middle-child, trapped in a sisterhood, all with hair of gold—like their mother. (The youngest one in curls.)

Jan's existential dilemma was not just having a weak sense of identity, but having to live within a clan who refuses to acknowledge that such a thing could hold any importance for her. Her stories revolve around anxiety of the self—of misplacement. And are doubly troubling because her exterior is a perfect example of acceptable Southern California girlhood of 1971, when this was aired. With her long blonde hair, blue eyes, and apple-cheeked American-girl looks, she should have been living it up, sunshine-state style. But because she was sandwiched between a relentlessly groovy older sister and overtly babyish younger sister, she was destined to be unsure of her importance in the world—forever questioning the qualities that made her unique. The making of an artist, if you will.

A feeling that would be expressed so well around the same time by bedraggled boy-men in wigs, spandex, and makeup.


Since twelve-year-old Jan wasn't about to run away to follow The New York Dolls (although what an episode that would be!), she could only try to alter her exterior to match her interior turmoil. With tragic results that only magnify her isolation—as we shall see. And now, Carol Brady, in a cheerful pantsuit, surrounded by wood paneling, welcomes you back to the 70s! 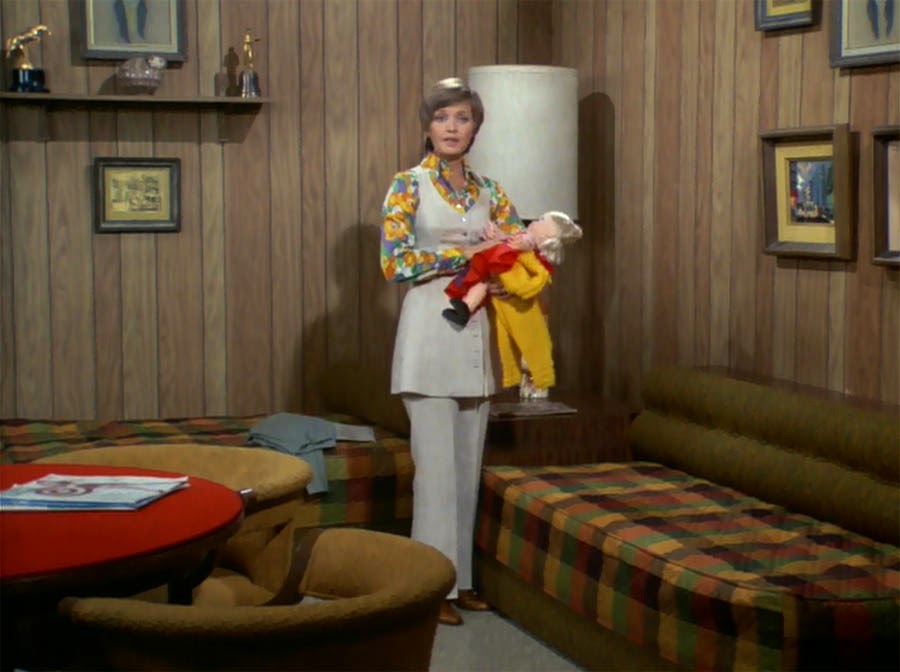 With special-guest star, the late, great Marcia Wallace, who I believe was a big influence on my art, as "Saleswoman." 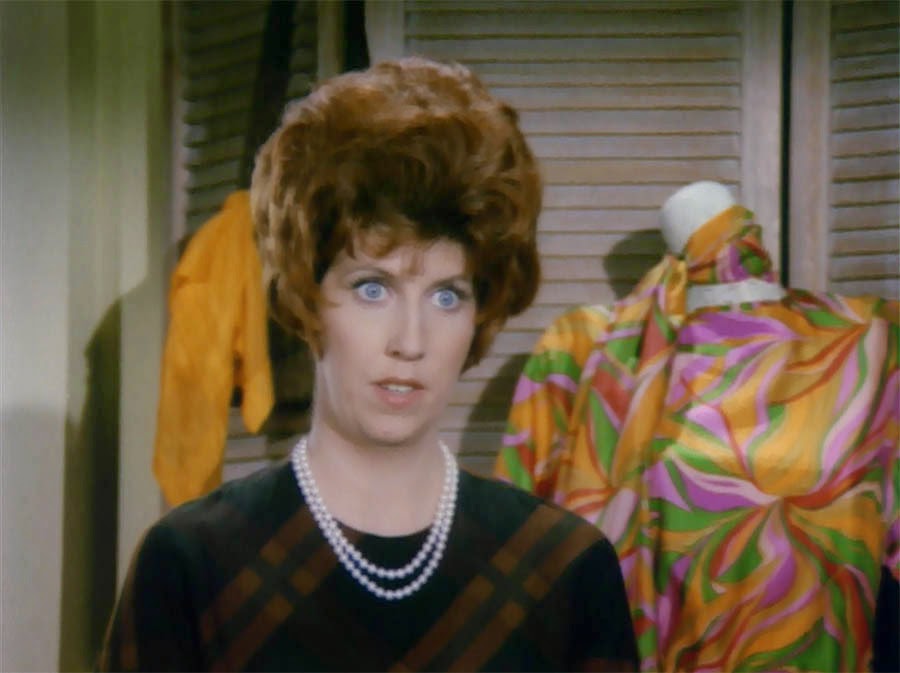 It all starts when Jan receives an invitation to Lucy Winters' birthday party. Hooray—apparently Jan's no wallflower. But, Jesus Christ, what's this? her supposed friend addressed the envelope to Marcia, even though the invitation was for Jan. That's weird—who does that? Was Lucy subconsciously wishing Marcia would come to her party? Was she thinking of Marcia the entire time she addressed the invite? Does she have some kind of crush on Marcia (understandable, who didn't?). In any case, it triggers something deep and disturbing in Jan's psyche. And she's pissed.


She tries to explain her feeling of invisibility and unimportance to her mom, but Carol, like so many socially successful people, doesn't get it. She tells Jan she's overreacting and after all, the invitation was for her, not Marcia. Jan's not convinced.


She searches a nearby magazine for answers and there, in marketing-speak, is her salvation. Or so she thinks. WHICH ONE STANDS OUT IN A CROWD? 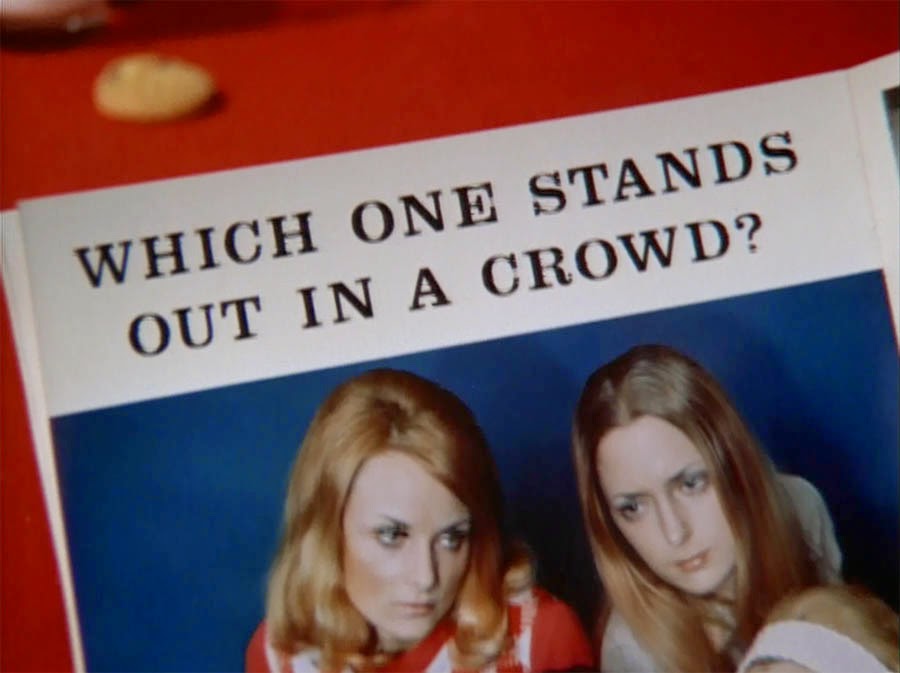 Why, the BRUNETTE, of course.


This advertisement for something that involves GLITTER, in sparkly surround-font, portrays exactly what Jan's problem is. Yes, a hint of delusional thinking—we'll get to that soon. It's HAIR. Hers is the wrong color.

Do I have to spell it out? These are the psychological implications of wrong-colored hair. And as a life-long brunette, I know of what I speak:


Jan's blonde angst has all the hallmarks of a budding punk misfit. But instead of picking up a guitar, she totes her little purse to the nearby department store to buy a wig. That's right—a wig. Jan will seize the day and stand out in the crowd with synthetic hair as her trademark. Nowadays, she would just dip her hair in pink Kool-Aid and be done with it, but she's a little too ahead-of-her-time yet behind the times for that.


The awesome Marcia Wallace, ladies and gentlemen, always ready for a little caustic underplaying no matter what the situation. 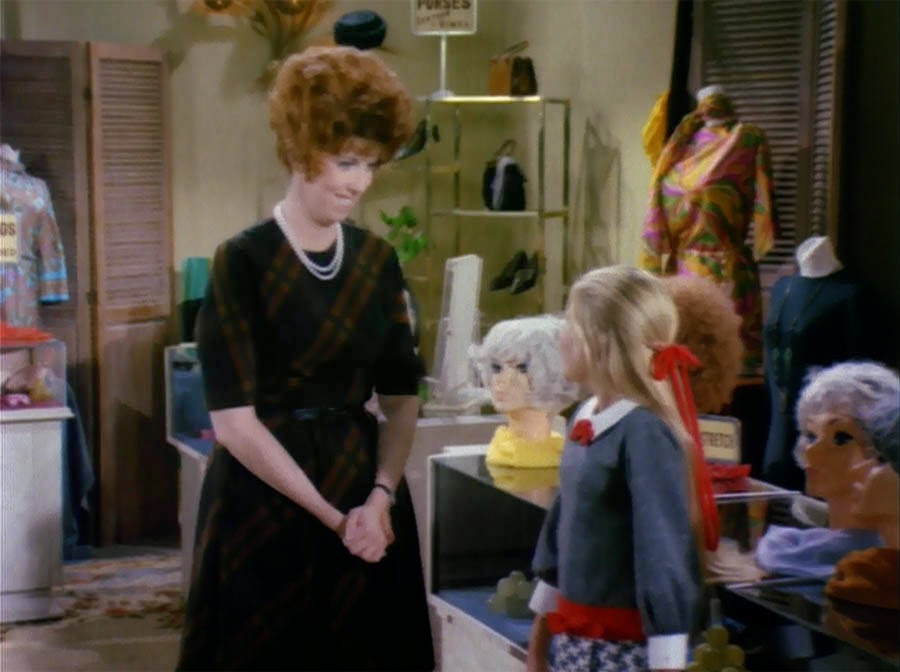 Unlike Carol Brady, she grasps Jan's problem immediately and promises to remedy her fixation with a shot of endorphin-producing consumer-based impulse gratification. The interplay between Jan and Saleswoman is the best and funniest part of this episode, but that's no surprise. Wallace was a warm presence with the ability to reveal all her sardonic thoughts beneath her quirky exterior. Just think if she had played Carol Brady. The implications are implosive to my brain. 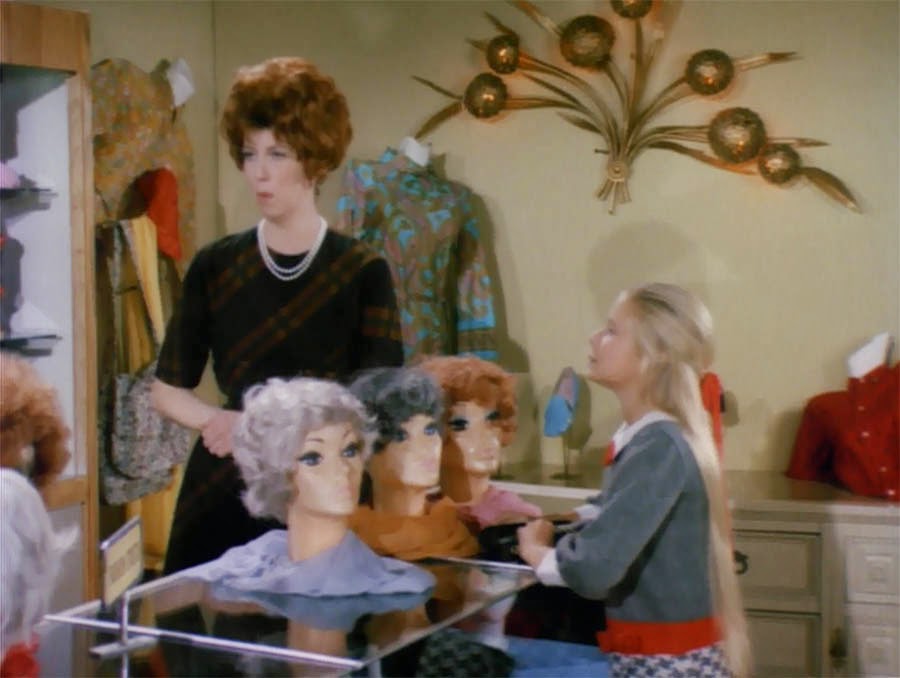 As a child, I thought this wig was kind of cool. It's called Midnight Persuasion, or something like that. It's not right for Jan's coloring but it fits her mood pretty well. Still, even the Saleswoman admits it's too sophisticated for our protagonist. She's apparently not that desperate to make a sale. 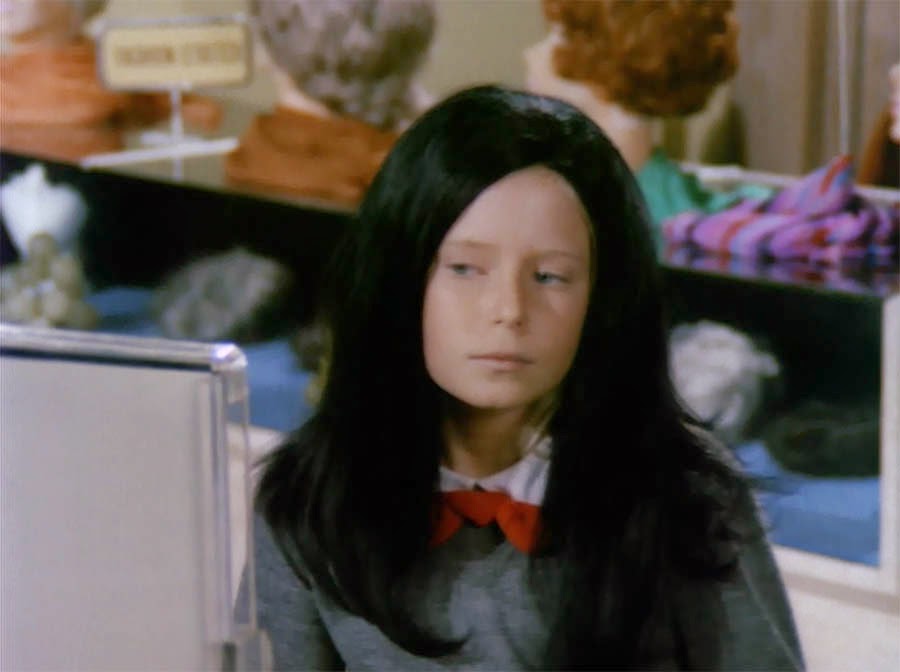 I'll admit that this scene had some kind of profound effect on me that inspired a lifelong fascination with false hair and persona. It's a good thing I ended up in a band who appreciates the power that comes from wearing a good wig. I was lucky. Jan, not so much so.

There's a number of ways Jan could have gone with this wig-wearing thing. 1971 was not the most radically fashionable year, but let's explore the possibilities available to a young girl, searching for a sense of self at that time. (Please excuse my poor Photoshop—it's not like I'm on salary here.)

She could maybe pull off Cher, during one of Cher's variety-show musical introductions. 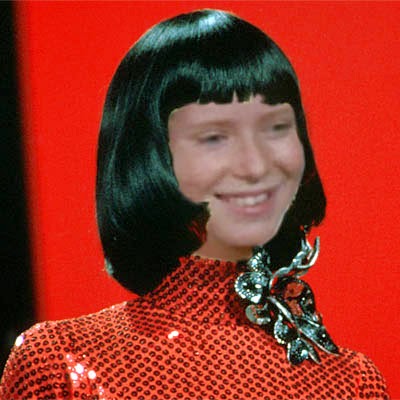 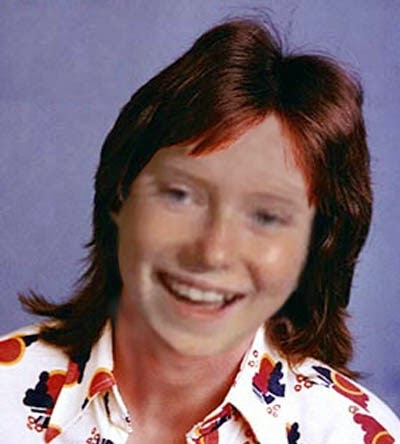 Or really stepped it up and do it up in a Raquel Welch-inspired do. Coincidentally Raquel Welch is known for her line of wigs. How cool if she had had a wig reference so long ago?


But maybe that wig saleswoman was desperate for a sale, because here's what Jan settled on:


And even worse—she LOVES it. Kudos to Eve Plumb for the power of her acting imagination, because she sells us on the idea that Jan thinks she looks terrific in this wig. Even in the face of harsh criticism from her sisters.


And condemnation from her parents, as well as ridicule from Greg and Bobby (but notably not Peter, who has his own B-plot issues in this episode). Jan believes in this wig and demands to be able to wear it to Lucy Winters' party, as a showcase of her new identity.


First of all, your friend's birthday party is not the time nor place for such a gesture—it's not about you, Jan. Second of all—things are getting pretty scary here, mental-health wise. This is delusional thinking to an extreme degree. But it was 1971 and no one cared. Do your thing!—that was our motto. Let it all hang out! Flip your wig! (See celebrity hairstyles above.) Mr. and Mrs. Brady, instead of riffling through the yellow pages for a competent child psychologist, capitulate and let Jan find out the hard way that suburban twelve-year-olds are the biggest conformists of all.

Here we see Jan's full-on psychosis in effect. She's totally into her new identity, which would work in John Waters' "Female Trouble," but is under-appreciated in the Brady universe.


Check it out, she's got a MIRROR to admire her new look. The Brady girls, although dismissive of their sister, carry on with their card game—the game of DENIAL.


While Jan's desire for her own look is played for laughs, the producers of The Brady Bunch continued to dye Mike Lookinland's blond hair so he would match his brothers.  Et tu, Sherwood Schwartz? 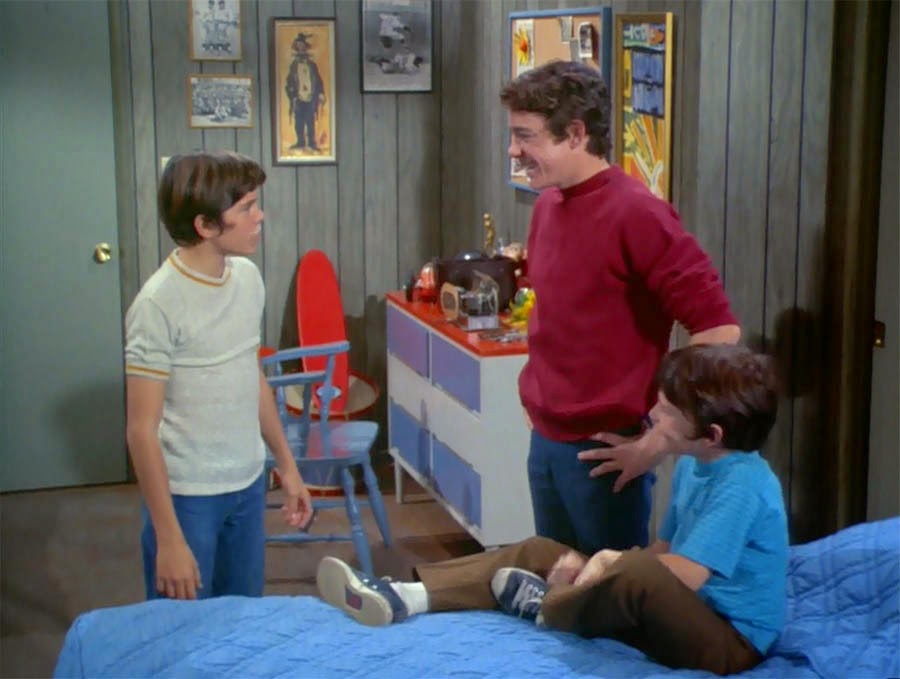 The night of the party arrives! Jan makes a grand entrance on Lucy Winters' porch. Jan wouldn't have come across as a complete lunatic if it had been her own birthday party, but oh well. On top of all her other problems, she's got narcissistic tendencies (probably the root cause of her issues, but I'm not rewriting this now). 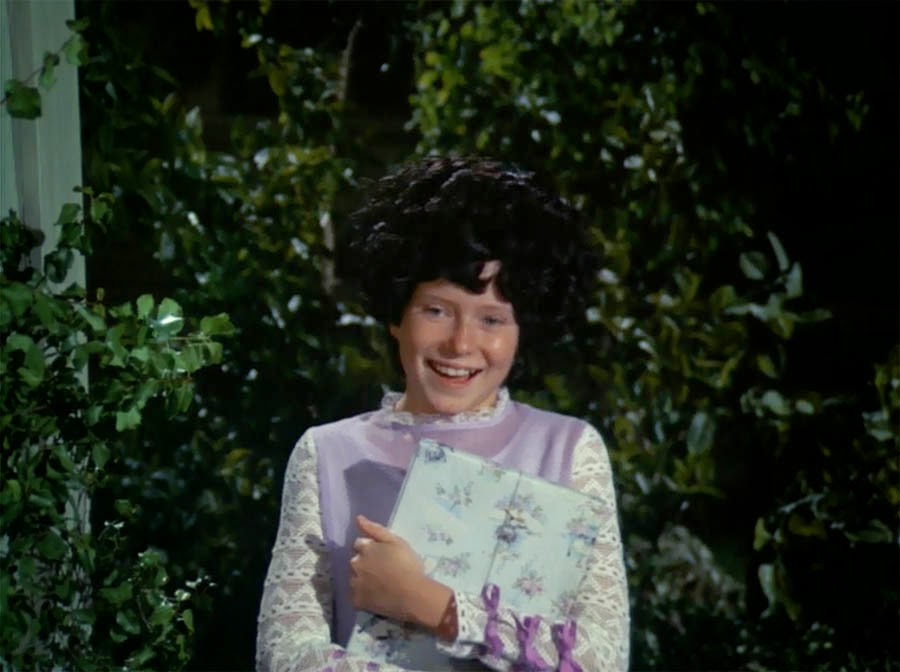 It does not go well. Lucy (played by ubiquitous child actress of the 70s, Pamelyn Ferdin) thinks it's the best joke Jan's ever played. And since Jan's never played a joke, nor ever shown a sense of humor during the series' run, this stings. Ruining Lucy's party, but not caring one iota, Jan runs home in tears (more good acting by Eve Plumb—it's a shame she felt compelled to follow up on the Bradys with with schlocky Dawn, Portrait of a Teenage Runaway—another Hollywood dream bubble popped). 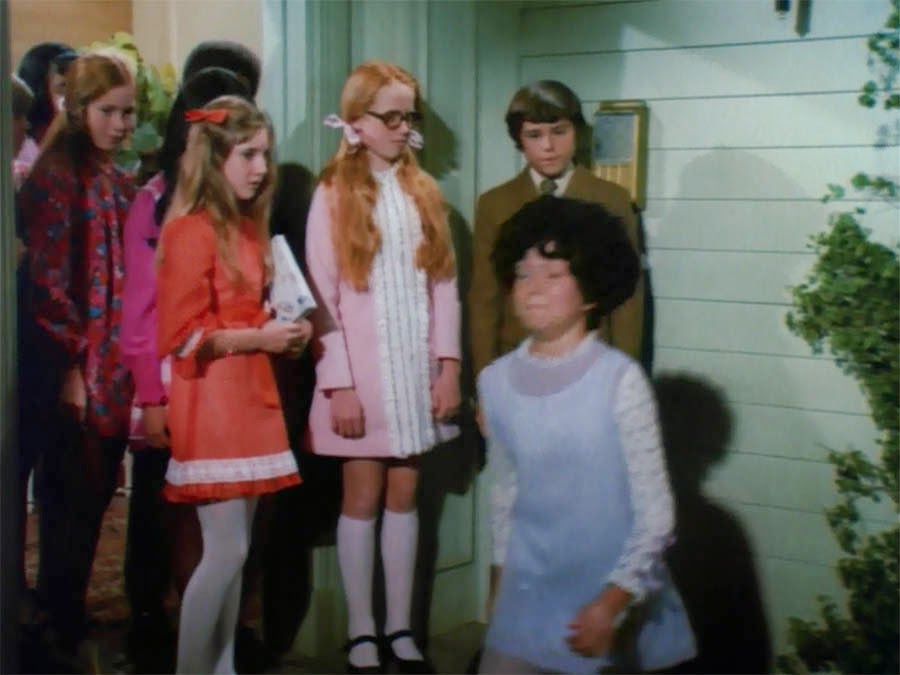 Peter, having to contend with obsessive lovesick stalker, Margie Rimple, is powerless to step in and mediate this tense social situation. 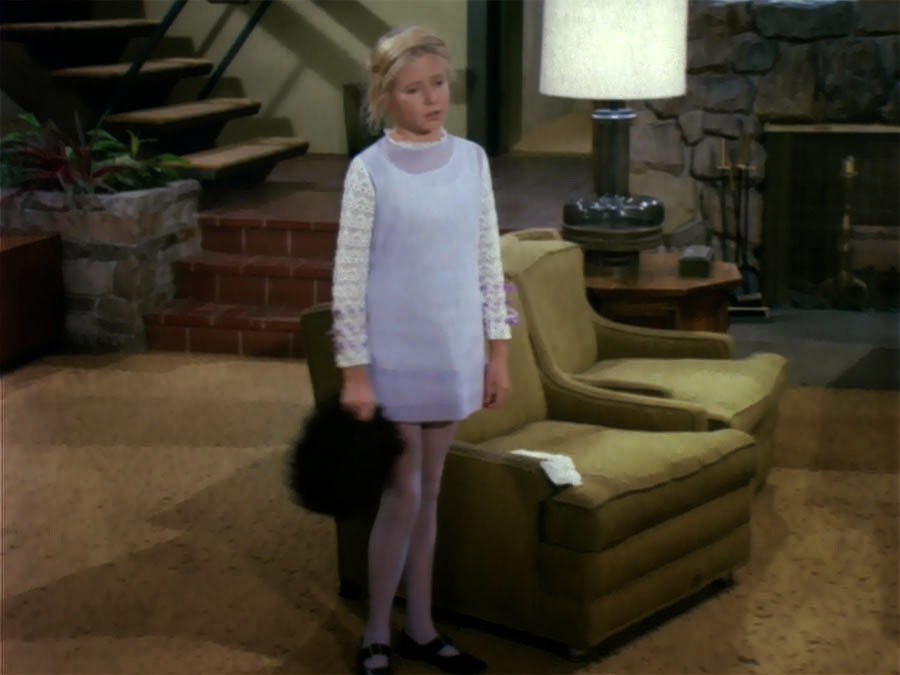 Don't worry—middle boy child, Peter, who understands where Jan's coming from—intervenes. Lucy has to leave her birthday celebration to apologize and beg Jan to come back, assuring her that everyone's envious of her real hair. Jan's all, "Wellll, I guess I'd like that." Then the gang, including Peter's stalker, head back for cake and punch. You know Jan's not getting invited next year. 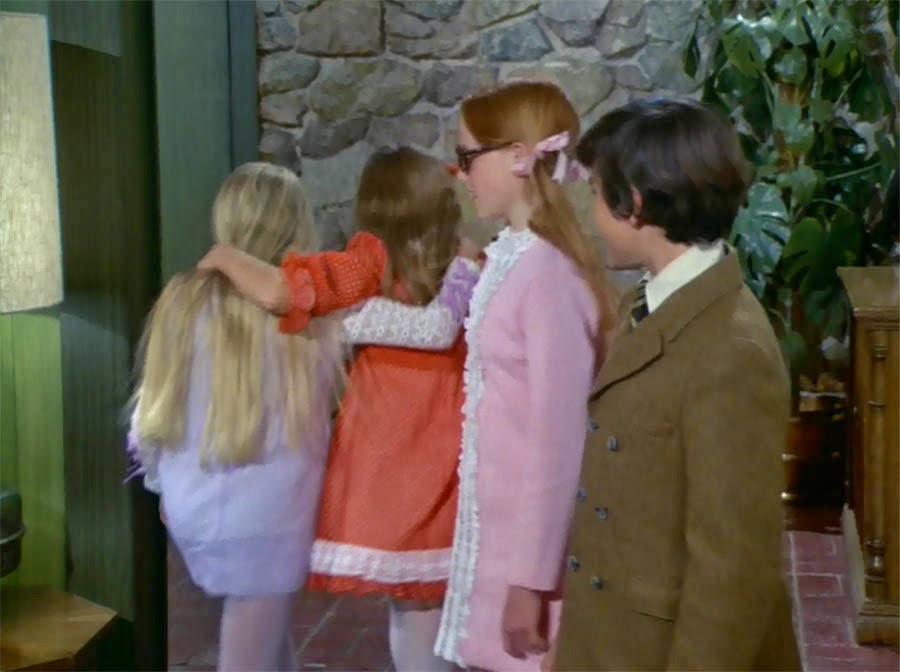 Carol and Mike are all, "We are the BEST PARENTS EVER." 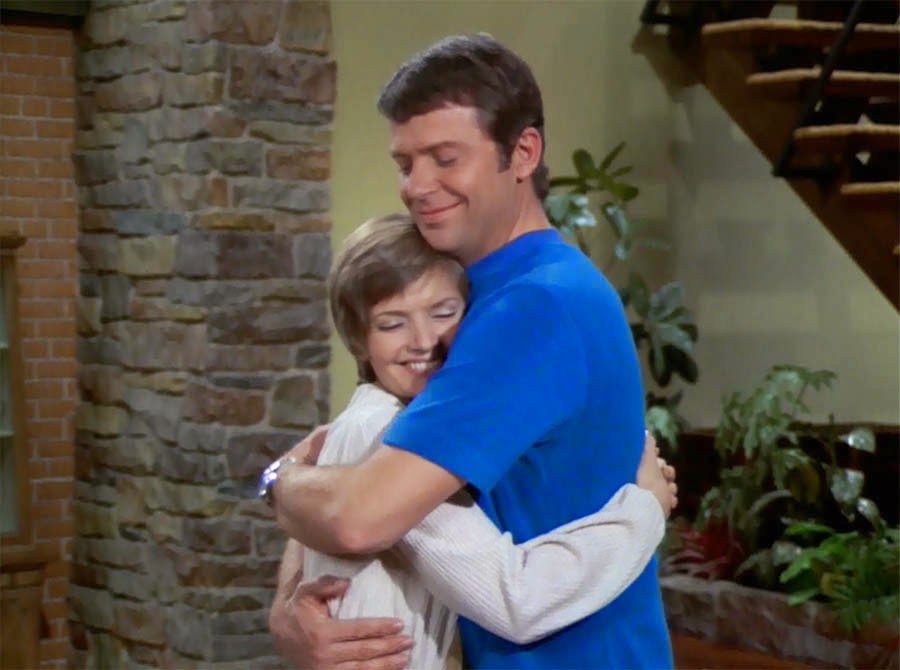 And the wig? Jan lets it go. She passes it on to Alice, who brandishes it like a wig of power, to the everlasting horror of the Bradys. The wig lives on in perpetuity, as do all synthetic hairpieces. 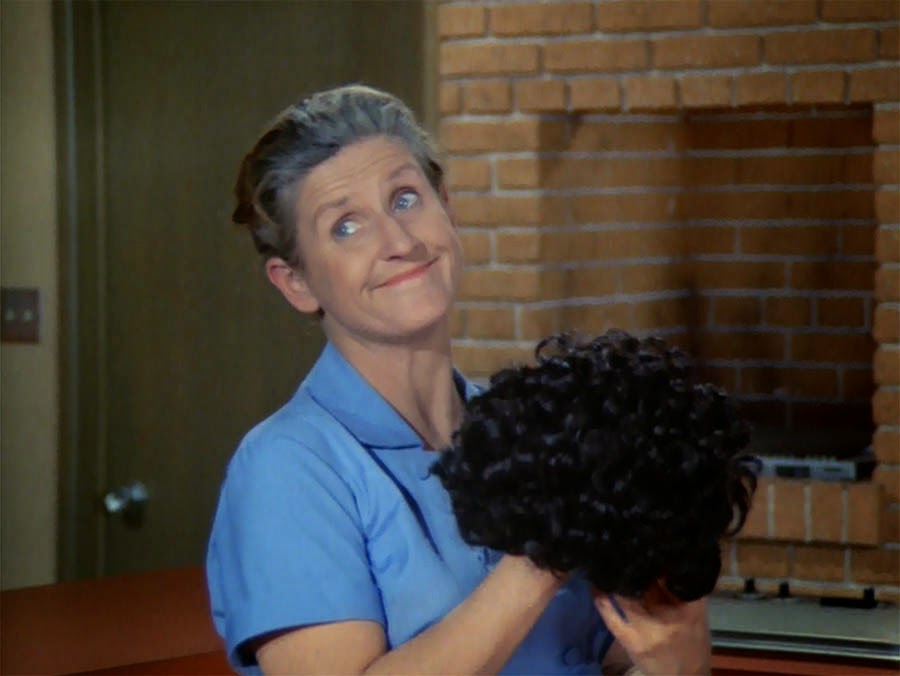 Now that we've analyzed that problem, what's up with this lamp?

Email ThisBlogThis!Share to TwitterShare to FacebookShare to Pinterest
Labels: Brady Bunch much?, time travel, TV party tonight, What the

Pamelyn Ferdin was in EVERYTHING.