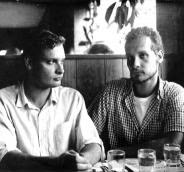 I'm breaking my "no blogging on the weekend" rule to encourage Portlanders to attend the final Kuchar Brothers showing at The Clinton Street Theater tonight. George was presenting his recent films last weekend and Mike will be there tonight to show "The Fornicators" and five other shorts.

I went last night. I was sorry to miss George's nights but I've seen some of his work and Mike's is usually harder to come by. He's a tall man with a Bronx accent and heavy-duty beard. He looks at his shoes a lot when he talks but he has a really friendly, open manner. An unusual speaker who laughs at himself. There's a metaphysical, meditative air about this guy, who has lived his whole life compulsively creating art, without worrying about the "how" and the "why" of it.

Also shown, a rare documentary about his aged and dying mother that was very moving.

Some tidbits from Mike Kuchar's talk:
- Filmmaking is a hobby, a vocation for him.
- He doesn't like to work from a complete script, preferring to film intuitively as he goes. But he's also a control freak who wants to be in charge of the entire production. His brother George works more loosely but Mike says the chaos of that scares him too much. He's afraid the cast would take over.
- He's worked as a cinematographer on regular film crews but found the sets "cruel" and would rather do his own thing.
- He loves drawing and painting and is particularly interested in the fairy portraits of the Victorian painters of the 1800's.
- Sometimes a person will come up to him and want to make something and he'll be inspired by their personality, or the inspiration will come from a book of poems on the set, or even a terrible wig, worn by one of his actresses. He has built a film around a black, corkscrew-curled wig.
- He edits on Macro System's Casablanca editing system, which allows him to use his TV set as a monitor, and not need a computer. He bought the latest edition after he and his brother were awarded $50,000 grant for their historic contribution to underground film.
- He says artists shouldn't worry about having money to make art because it's not the important thing.
- He doesn't make the campy sci-fi films of his 60s-era youth because he's not that guy any more. At his age, his libido tends to take over when he films. (He looked down at his shoes and laughed when he said this.)


"Sins of the Fleshapoids" trailer (1965) - Mike's most famous film; written with George, who also stars.


Many of Mike Kuchar's newer videos are available for viewing (in Apple Quicktime format) at the Video Data Bank.


"It Came From Kuchar" - a feature-length documentary in the making by Jennifer M. Kroot about the Kuchar brothers. Great trailer shows George filming a giant spider attack at the San Francisco Art Institute with his class, narrating over a series of paintings featuring attacks by mythical monsters, and interviews with Mike and John Waters--ha-larious.
Posted by Miss Lisa at 11:52 AM

Email ThisBlogThis!Share to TwitterShare to FacebookShare to Pinterest
Labels: art for what ails ya, cool guys, gay, the mooovies