The Fabulous Dames of "The Big Sleep"

Until this week I had never seen the 1946 Howard Hawks classic. If that makes me a film-buff tosser, so be it—I have my reasons. But it was one of those films that haunted me in a "what if you die in a car crash and haven't seen The Big Sleep" way, so I bit the bullet and took a look.

It's super-dialogue heavy, but if you're a Raymond Chandler fan, that's definitely a good thing. The happy surprise for me was scene after scene of fabulous dames. Not just Lauren Bacall as possibly duplicitous Vivian Rutledge, and Martha Vickers as her doped-up, thumb-sucking sister, Carmen Sternwood, but dame after dame above and beyond these two fine-looking ladies.

And they're all completely turned on by Bogey as Philip Marlowe, who was 40 at the time, experiencing marital difficulties combined with a drinking problem, and having a love thing with 20-year-old Bacall throughout production. It must have been quite the ego-boost for a film icon heading into midlife (whatever gets you through the aging process). "The Big Sleep" would presage the James Bond franchise by a couple of decades, setting the stage for all kinds of heightened sexual innuendo and marvelous costuming.

I totally dig these 1945 fashions with their strong lines and luxurious textures. The shoulder pads alone could be considered adequate protective gear during a round of fisticuffs. And these dames may be trapped in a myriad of vulnerable situations, but they're tough and way sexed up throughout their various ordeals. Shooting off the metaphorical come-ons, they run circles around the Hayes censorship codes of the day.

I gathered some stills, celebrating a celebrator of strong, sexual women, and Mr. Howard Hawks (who, like a lot of his protagonists, was no angel, but that's another write-up). And now: 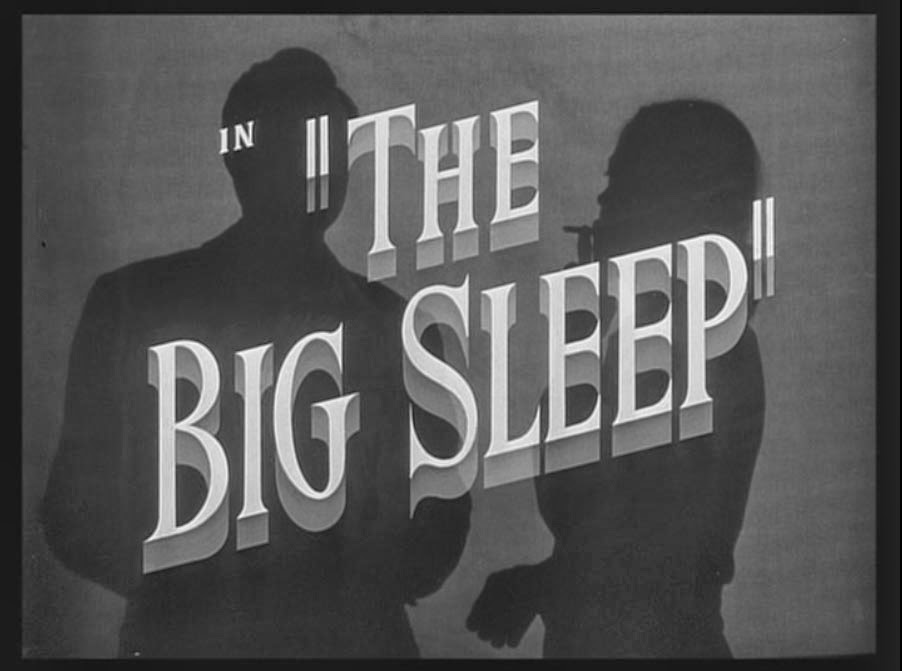 First up, Martha Vickers as Carmen. She is one hot, demented chick. Her scenes with Bogart were so good that studio execs, worried about Bacall's rising-star power, left a lot of Vickors on the proverbial cutting-room floor. Too bad! She's damn amazing. What if she and Humphrey had been an item? Her entire career trajectory might have been different and she wouldn't have had to co-star in such grade-Z fare as Captive Wild Woman. Our loss. 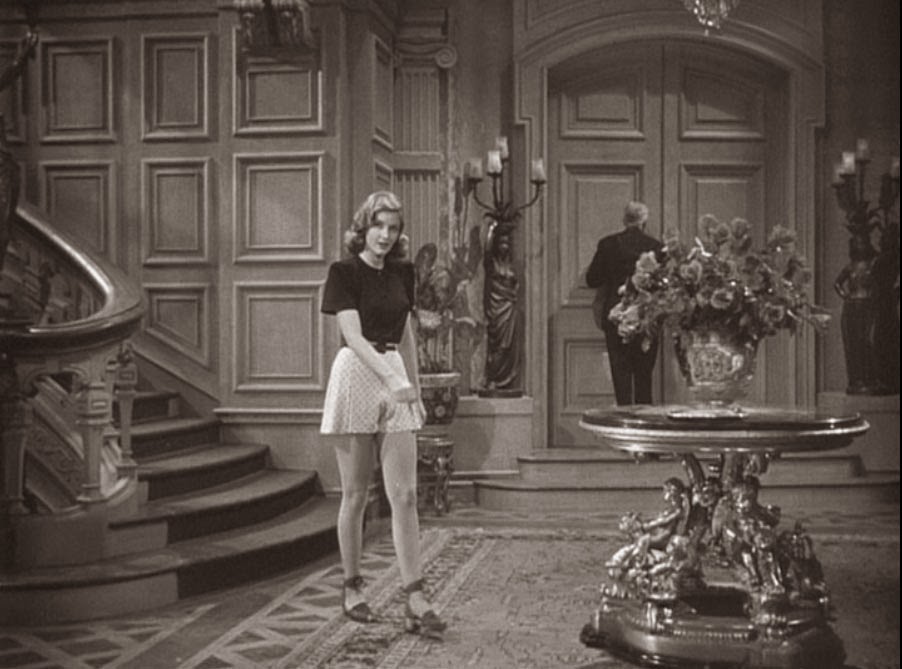 Looking to meet someone new? Try chewing your hair... 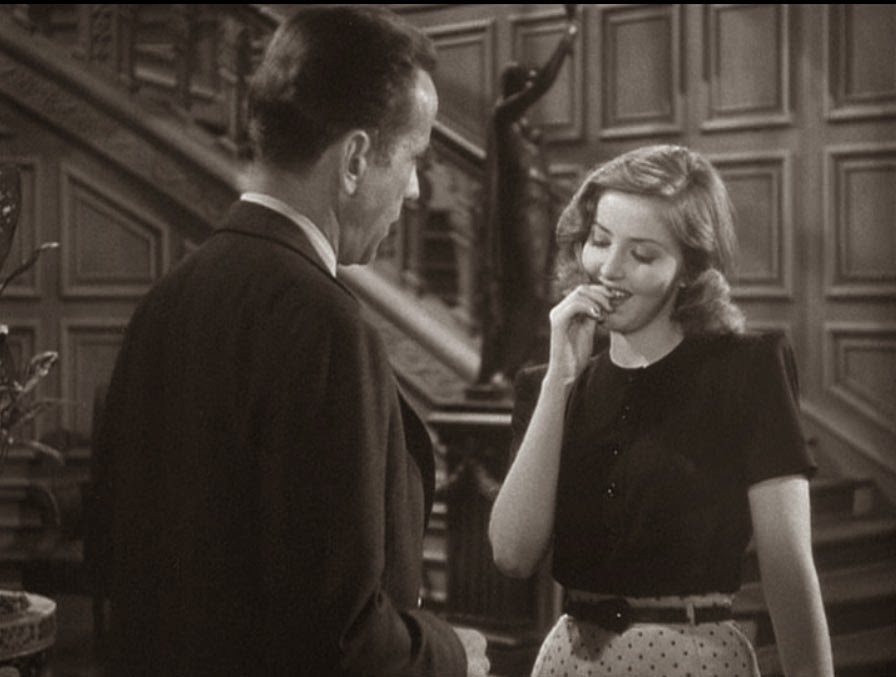 ...then fake unconsciousness. Physical contact will be made within three minutes of meeting. 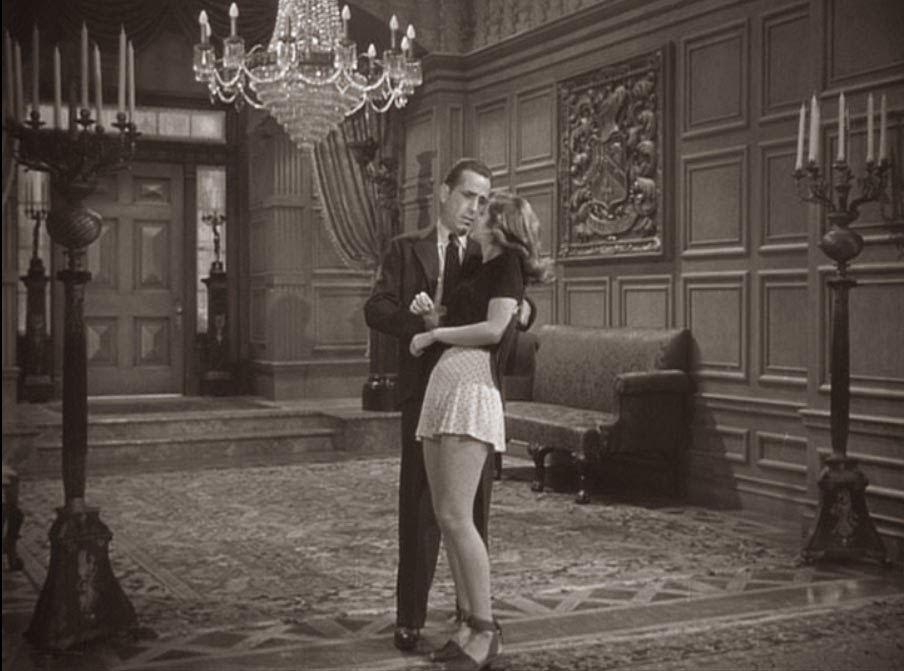 A den of iniquity, kind of toned down for 40s-era sensibilities, but the exotic decor and its hidden camera hint at all kinds of underground activities. 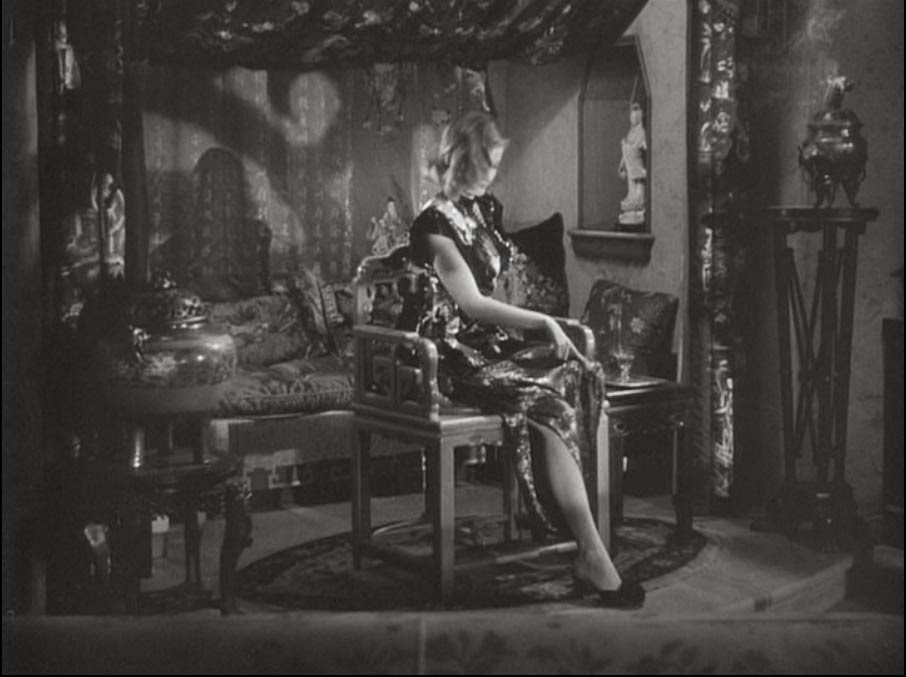 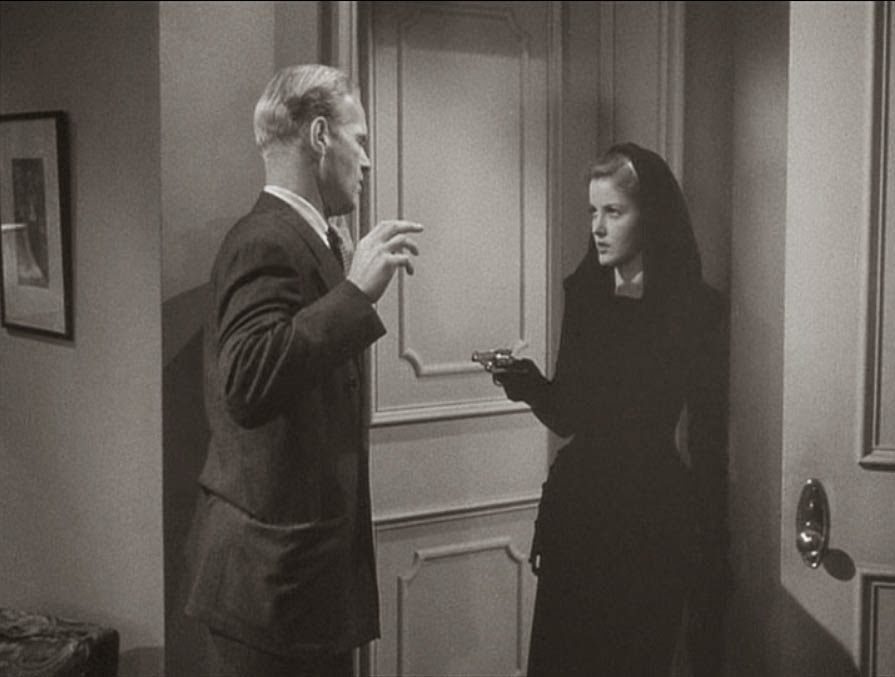 No one got as much mileage out of the recurring line, "You're cute." 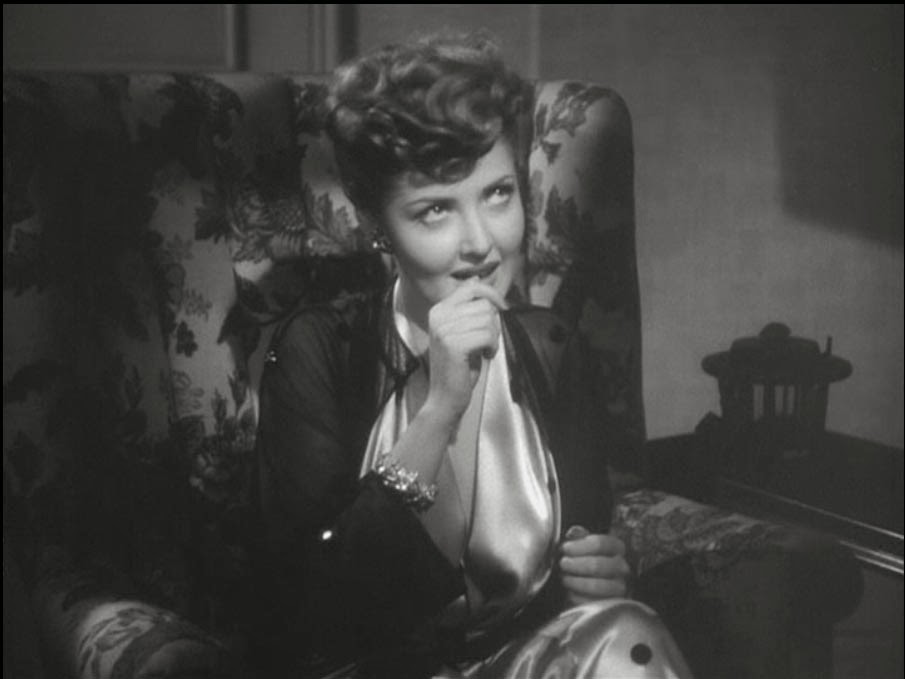 Next up, Lauren Bacall as Vivian. Love her lounge-wear--a look that would become popular again in the early 90s. I'm not a huge Bacall fan. She always does her best, but her best just isn't good enough. She was good at posing, being a professional model, but acting was tough for her. And she was only 20. Must have been scary, being groomed for stardom at something that didn't come naturally. 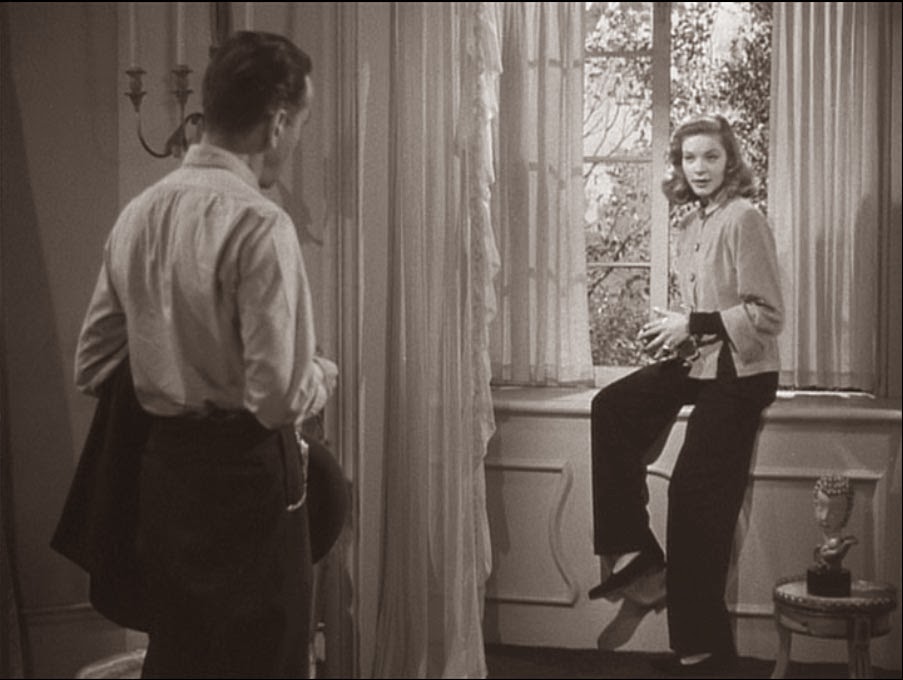 A lot of Bacall's scenes feel forced to me, and so they were. While the "The Big Sleep" release was held up during wartime, Bacall's agent begged Hawks to re-shoot a bunch of scenes with her to beef up her performance. Coming off a bad role after her stylish and powerful debut in "To Have and Have Not," he was worried that her star would rise no more.

Hawks, figuring any love scenes between his leads could only help his film, agreed and so lots of glamour shots of Vivian were inserted in what was essentially a film noir detective story. Bogart historians love this stuff but I think it detracts from the toughness of the film and overshadows the convoluted plot (not even Chandler knew who killed one of his characters). 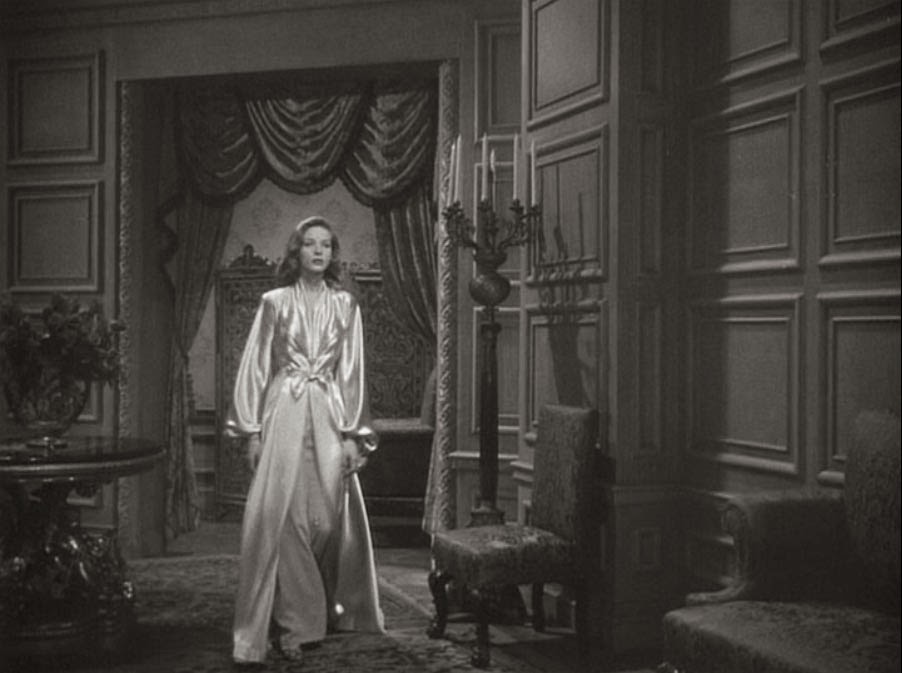 She does look good. 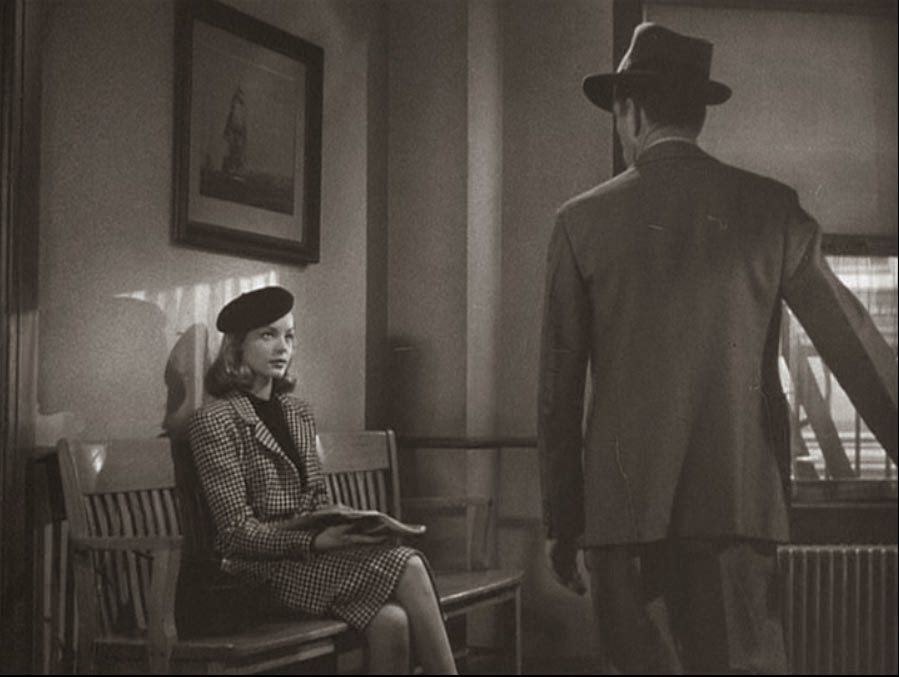 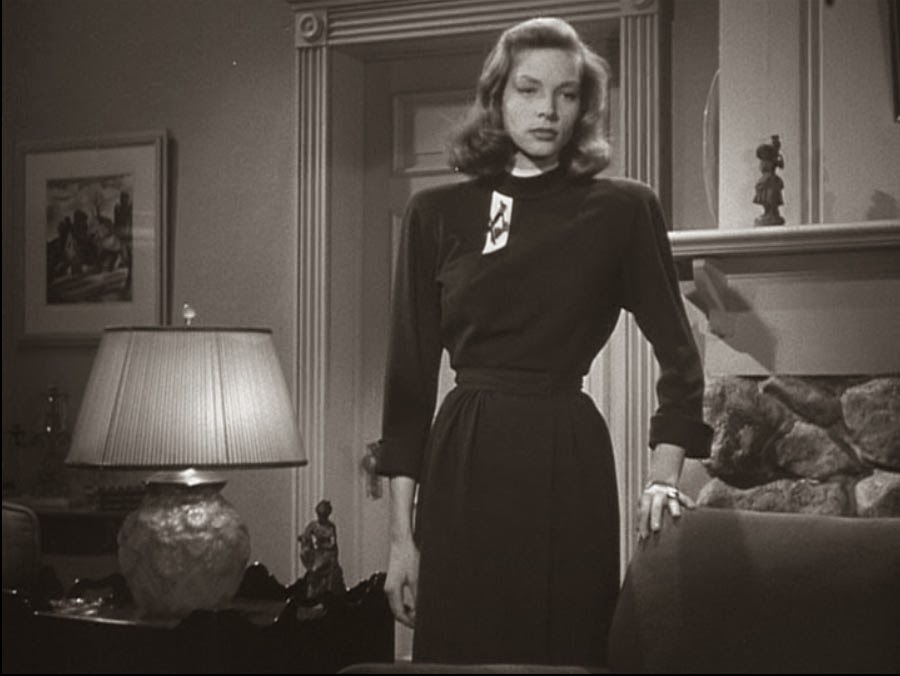 One of the big added scenes about "horse racing." Yeah, that's what they were talking about, horse racing. 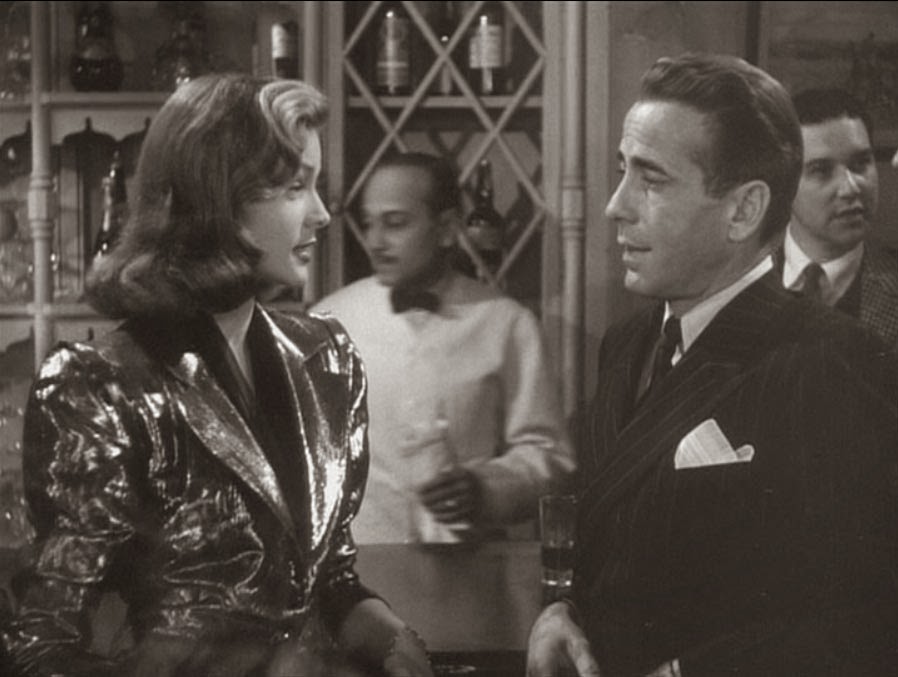 More fabulous dames make this film a stand-out. For your consideration, a rare-book dealer, played by the great Dorothy Malone. 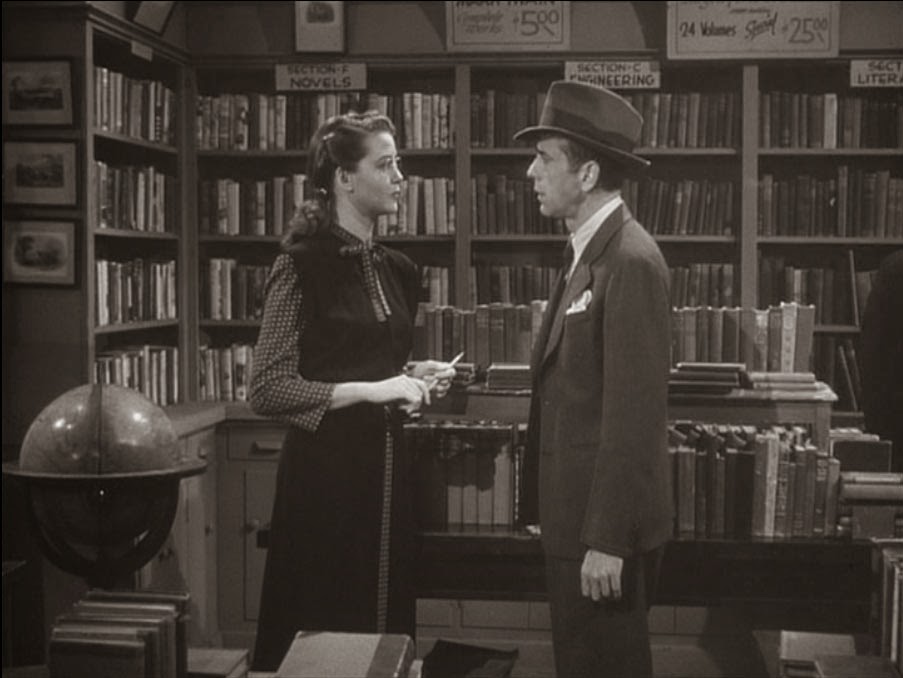 There's nothing sexier than a smart dame. 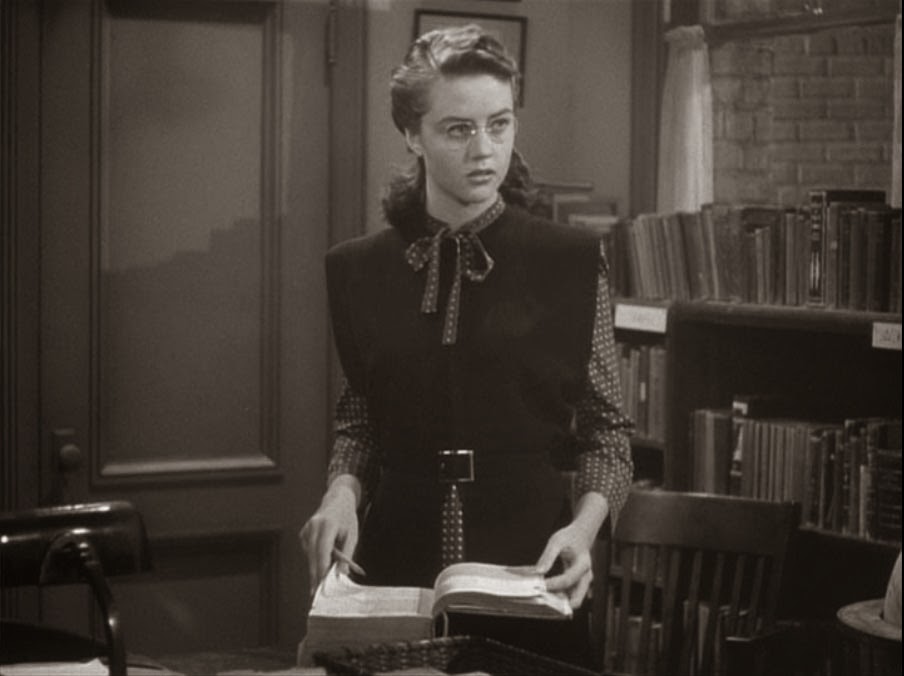 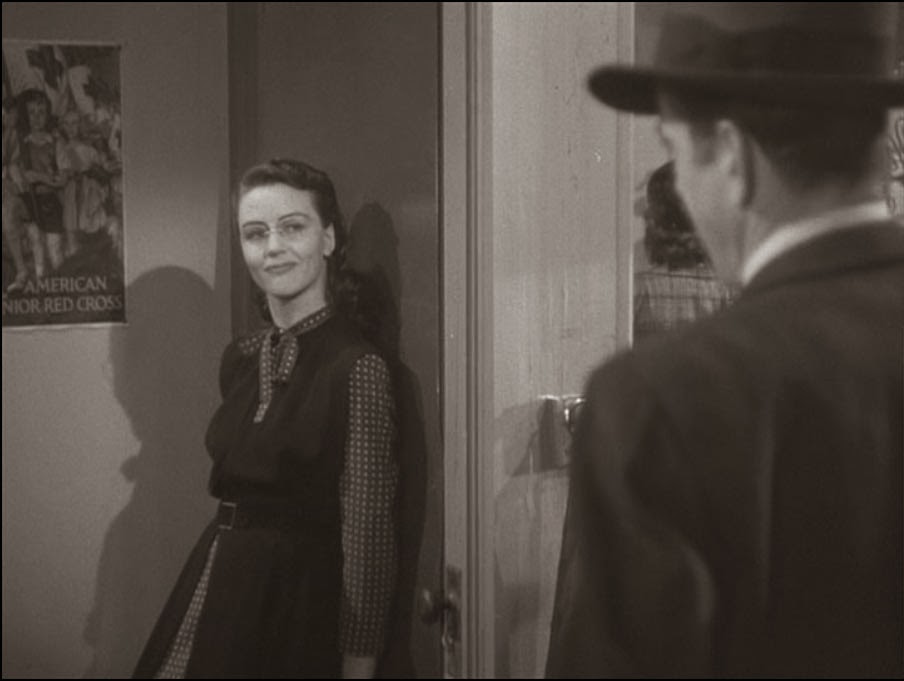 Lest anyone doubts what takes place behind closed doors during a rainstorm, this should clear it up  (fade to black). 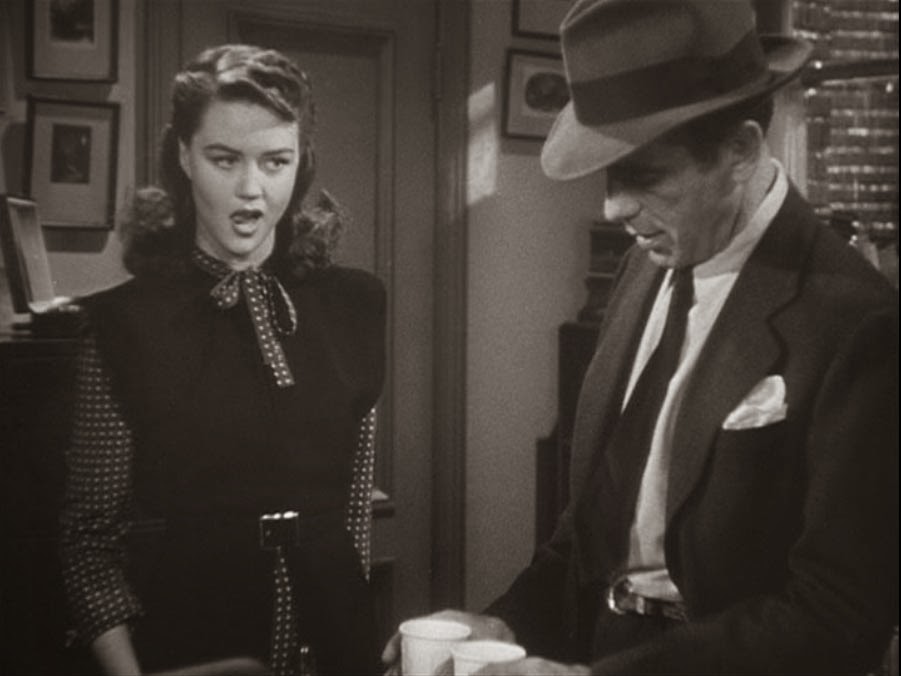 The aftermath: "Thanks, pal." And no one gets punished, not even the single woman. 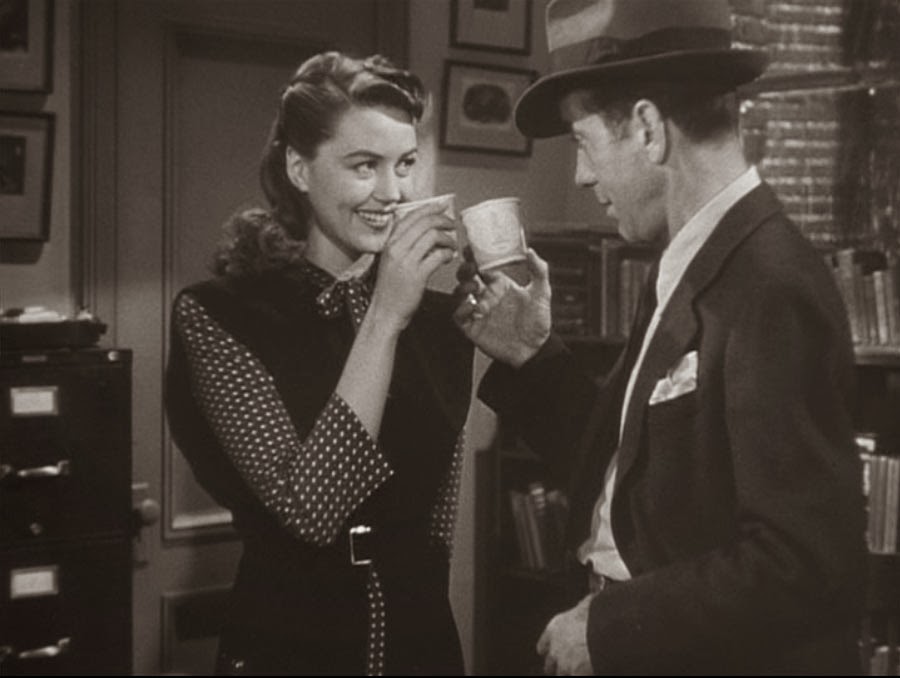 Across the street, rare books of another kind are being sold. 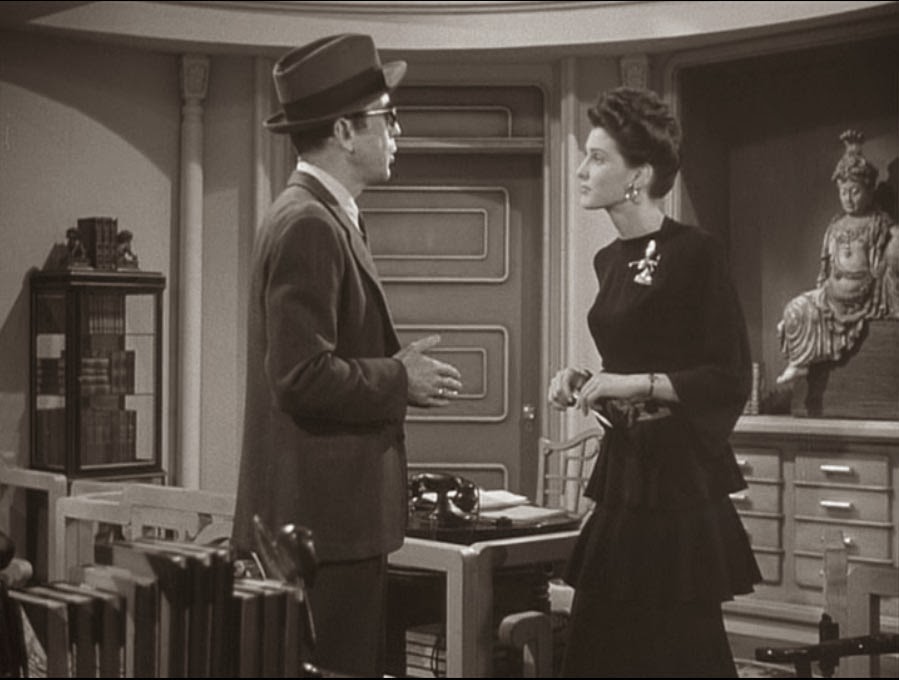 This retail employee might not know much about books, but her taste in brooches is impeccable. 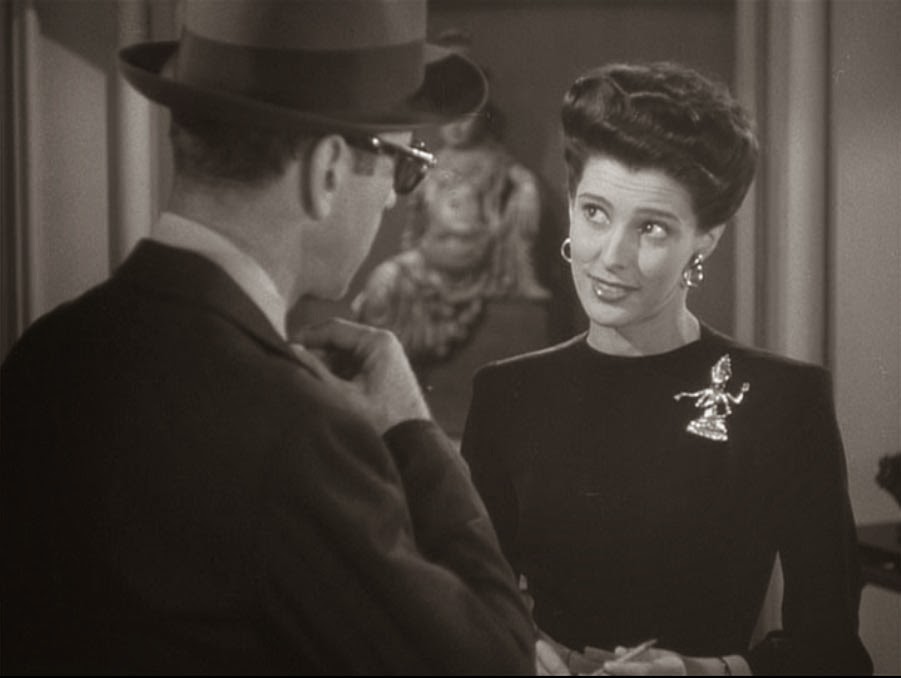 A randy cab driver, about to give Marlowe her number. 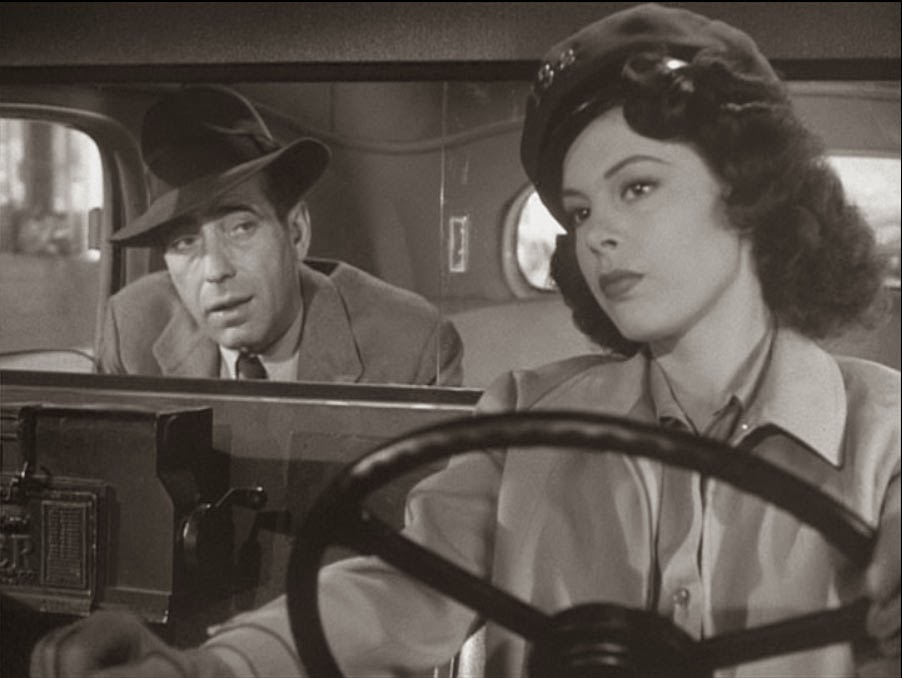 I wish we could follow the storyline of these two ladies in their tailored menswear, but they're extras, destined to fade into the distance of our imaginations. 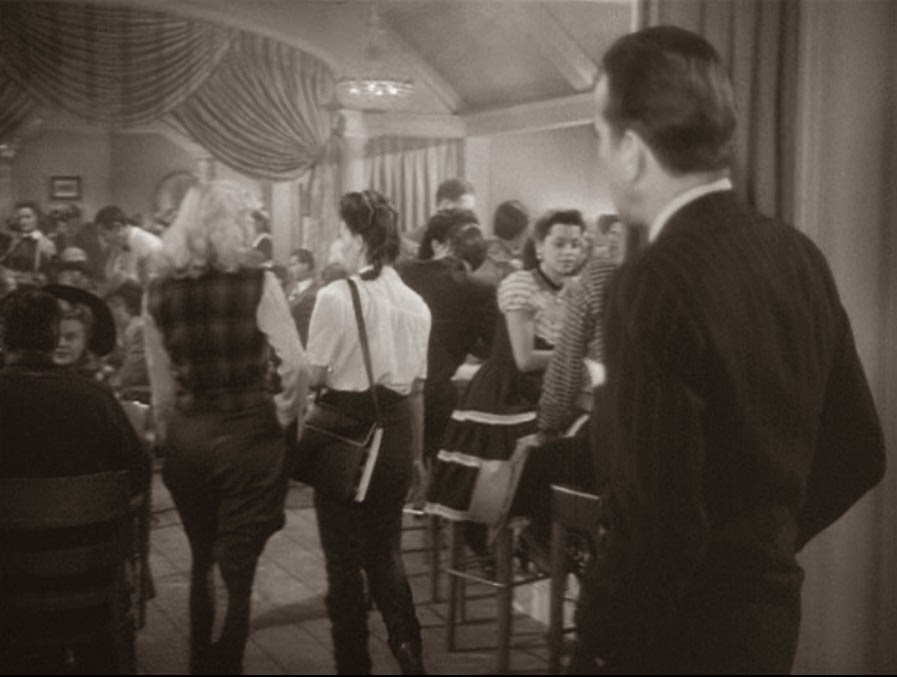 The Acme Bookstore is a sexy place.

Email ThisBlogThis!Share to TwitterShare to FacebookShare to Pinterest
Labels: cool girls, movie reviews you can use, the mooovies, time travel

Thanks for this post. I think you're right: the real not-so-subterranean appeal of The Big Sleep (film) is its James Bond-ish level of sexy unreality. All the gals you list and the sense of sexual possibility they bring just kind of hit you early in the film. The audience is turned on by all that and then that changes how it perceives everything thereafter (rather in the same way that films like Saving Private Ryan or Devil in A Blue Dress open with something utterly horrific and the inner cowering that leaves you with then changes how you respond to everything afterwards).

Overall, The Big Sleep feels to me a little style-less and under-directed. I get the impression that Hawks was a little flummoxed or even intimidated by the source material and s/play, by Chandler/Faulkner, etc.. It's as though he felt like he had no choice given that material but to, as it were, just put a camera in place and let the actors rip... But having made that possibly fateful decision, Hawk engineered a kind of amazing save by loading every corner with a feisty looker/fabulous dame esp. early in the picture. The heat coming from the screen gets us in Marlowe's head almost for free, i.e., without any big camera or editing tricks. Note that Altman's revisionist '70s take on Marlowe in The Long Goodbye changed lots but it kept The Big Sleep's, establishing, quasi-Bond-ish sense of ambient, pervasive sexual possibility. I know that there are lots of more high-minded reasons to watch and to like these films, but sexy-LA-ness is reason enough.