A Walk Into the Sea: Danny Williams and the Warhol Factory (2006)

Who was Danny Williams and what happened to him at age 27 when he parked his mother's car near the Atlantic Sea next to a pile of his clothes? That's the question probed by Esther Robinson, in her documentary A Walk Into the Sea: Danny Williams and the Warhol Factory. Williams was her uncle and his disappearance after a family gathering in Massachusetts in 1966 was never solved. Most likely he did end up in the sea, (his body was never recovered), and this film sets out to find out what led to this tragic conclusion of a promising filmmaker.


This summary on the film's website is excellent. I can't really top it. I'll just put in my own words what this film brings to the ongoing study of Warhol's Factory scene and how it remedies a very unfortunate oversight on the part of biographers and historians in regards to Williams' role in that chapter in America's artistic underground. One of the reasons Robinson made the film is because of the silence within her family about her Uncle, and the lack of information on him in Warhol documents. When 20 films by Williams surfaced in the Warhol archives and his family finally saw his work, Robinson felt this film should be made. 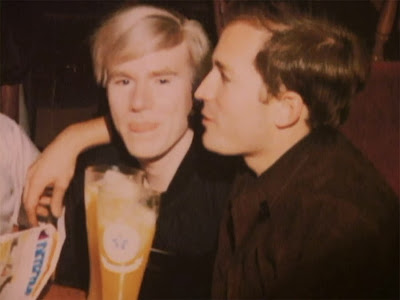 You don't get to see any of Williams' film work until about halfway through the documentary and when you do, you will understand what motivated his niece. Williams came from the Harvard crowd that descended on the Factory through Edie Sedgwick's friend Chuck Wein. They were already partying pretty hard before joining Andy Warhol in his creative endeavors, but once ensconced in New York City, there was copious amounts of speed-freaking. This started out as motivating and fun, but for many, ended in tears.

At age 24 Williams had already edited feature-length documentaries for the Maysles brothers, and had designed complex light shows for the Velvet Underground for Warhol's Exploding Plastic Inevitable. He was also Warhol's boyfriend for a time. Warhol described him as a "Harvard electrician," causing interviewee and Warhol cohort Danny Fields to sardonically ask, "What coinage! Whoever heard of an electrician from Harvard?"

Through interviews with Factory collaborators, including Brigid Berlin, John Cale, Gerard Malanga, Paul Morrissey, Billy Name, and Williams' mother, archival photos and a sure, artistic hand, Robinson creates an evocative portrait of her talented Uncle. Sadly, we will never see more of what his wondrous eye for light and shadow would have captured on film.

What led to Danny Williams' disappearance? Family conflict, drugs, depression, infighting for power at the Factory. Once someone got too strung-out or demanded some form of financial compensation for their work, the top-tier in Warhol's circle would cut them out, leaving behind people without a job, home, or social-support net. With strobe and high contrast, this pop-art scene, in all its manic creativity and psychological horror, is laid bare—haunting. Stills are from Williams' 16mm film Factory.

Warhol was a bit of a cult leader in the early 60s. Look at his halo. 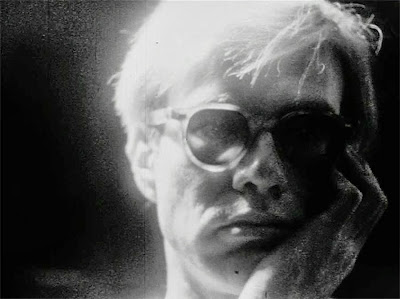 Andy, like many quiet people, loved talking on the phone. 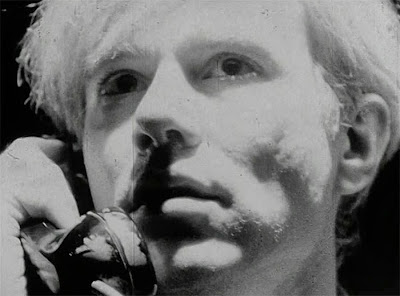 Billy Name, designer and photographer, at the Factory. 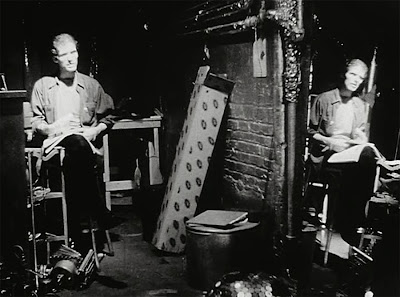 Brigid Berlin, on the pay phone. 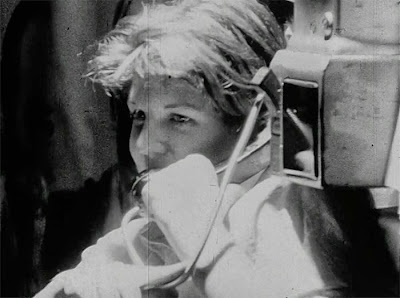 Edie Sedgwick, living it up with painter Harold Stevenson and Brigid Berlin. 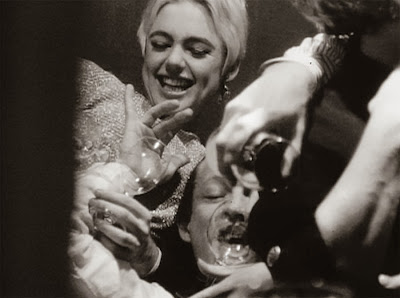 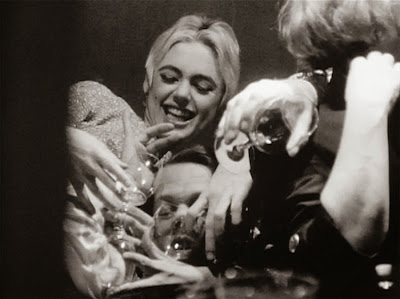 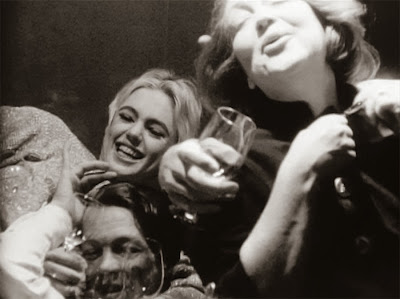 Harold Stevenson, glorified for his exuberance and physical expressiveness. You don't get this in a Warhol production with its indifferent camera-stare. This is clearly Williams' vision. 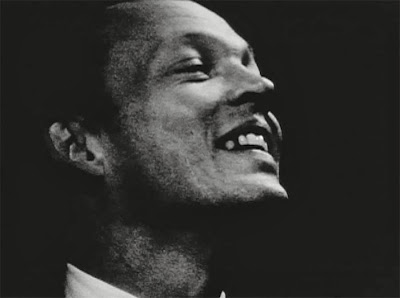 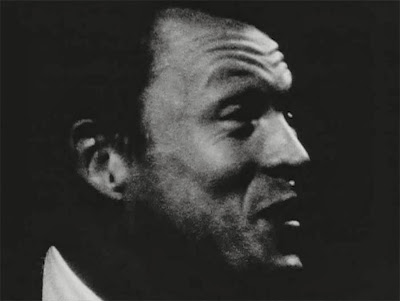 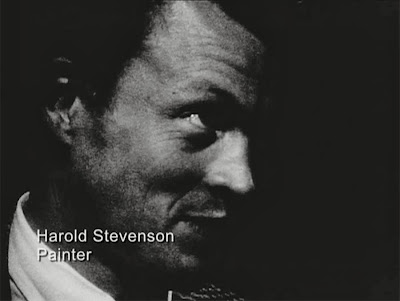 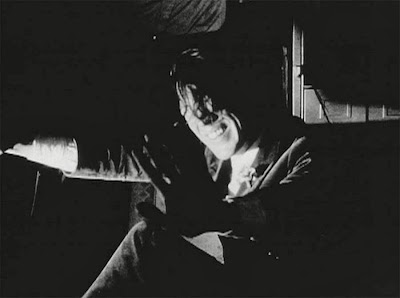 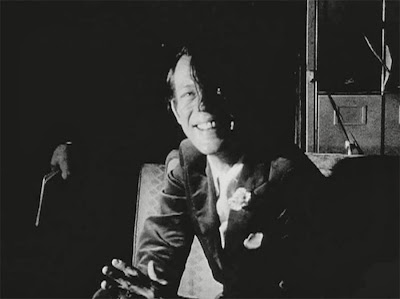 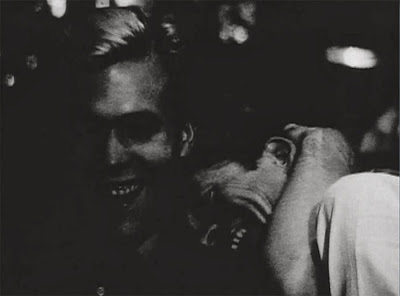 A diabolical Henry Geldzahler. Like someone from David Lynch's world. 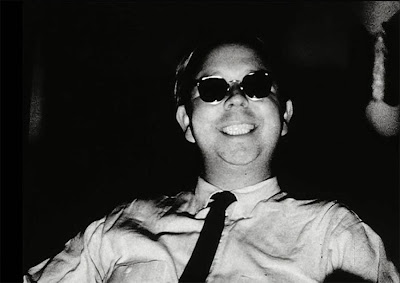 Lou Reed in what may be the earliest footage of the Velvet Underground. 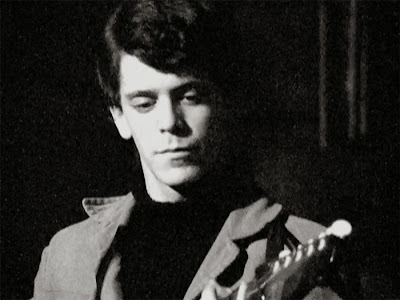 John Cale, who gives good insight for the documentary on the cold, cold world of Andy Warhol. 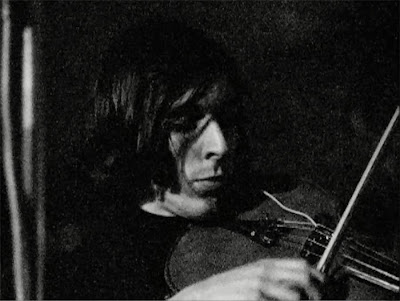 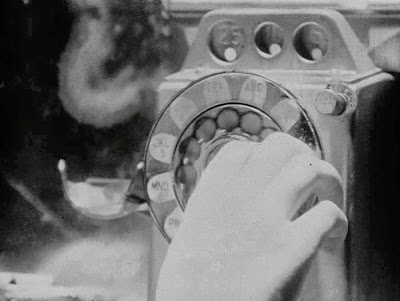 Factory excerpt, from the documentary.

Email ThisBlogThis!Share to TwitterShare to FacebookShare to Pinterest
Labels: art for what ails ya, movie reviews you can use, the mooovies, time travel