Hello and welcome! It's time once again for another thrilling retro romance comics adventure. Today we explore the twisted, masochistic world of Hollywood stardom in the life of April O'Day, Hollywood Starlet!. This super-charged, two-parter is complete in this issue of Girls' Love Stories, No. 112, July, 1965 and despite its abundance of action-verbs, is weirdly not featured on the cover.

Instead, this rather mundane love-triangle tale of suburban heartache is featured, with blue-screen background (lazy illustration!). I don't know whose editorial decision this was but it was a poor one. 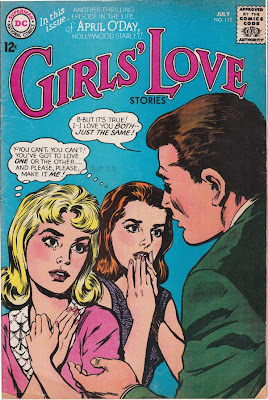 I mean, look at the inside-cover page of "Please Take My Heartbreak!" 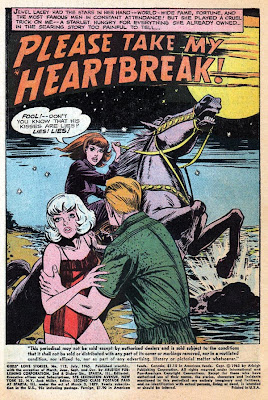 The horse-riding lunatic screeching "Fool!—Don't you know that his kisses are lies? LIES! LIES!" while crazily terrorizing the young couple with her black stallion on the beach of churning emotions would have made a great cover. Perhaps DC Comics didn't want to alienate its reading public with this sordid Hollywood morality tale. Even the title "Please Take My Heartbreak!" has the ring of hopeless masochism in it. Hey, lady, put your heartbreak in the file-cabinet of forgotten dreams and move on. Nobody's put on the planet to simply "take it away" from you, no matter how politely you ask.

So, where were we? Oh yes, Roy and April are aspiring movie stars, on the set of the new Jewel Lacey feature film. Jewel has it all, but for some reason she cannot accept the growing love between her acting underlings that blossoms on camera. 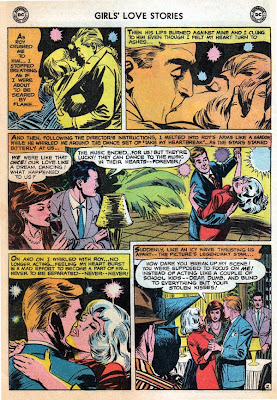 Great use of verbs throughout attempt to describe the rush of infatuation as Roy and April act out their small parts. April is crushed, seared, burned and finally feels her heart turn to ashes as Roy kisses her on the dance floor. She would make a great barbecue-cookbook writer. But wait, she also melts and whirls before the icy wave that is Jewel thrusts herself between them, breaking up the scene with one of her legendary temper tantrums. Exciting! 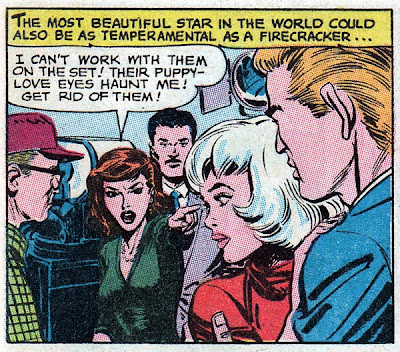 Nobody wants puppy-love eyes on her set (Jewel is a great role for Madonna, by the way, who's due a come-back on the big screen). Jewel has April and Roy thrown from the set, the director shrugs it off since she has final cast approval. She is all-powerful indeed, especially considering this takes place in 1965. I wonder how many young readers actually related to Jewel and hoped that one day, they would be the ones to throw actors off their movie sets?  Dreams!

April, her dreams of stardom smashed to smithereens, is understandably upset. But the girls back at the apartment throw her and Roy a wild beach party to cheer them up. There's even a portable record player on the sand for a round of swinging dance tunes. California is so awesome. Even the beaches have electrical outlets. 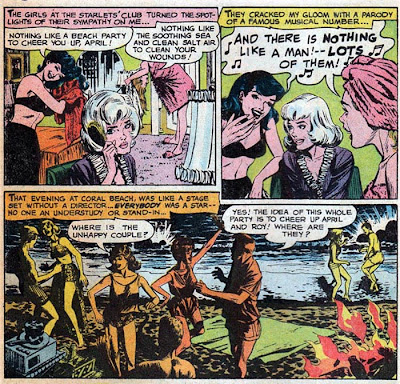 But April and Roy have their own remedy for curing misery and it involves burning lips for a fit of grilled-love fever.

But not so fast, kids! Jewel Lacey has a bone to pick with you from atop her juiced-up horsey.


April decides to take the proactive approach and simpers her way toward Jewel's fabulous beach house, ready to beg for their roles in the movie.


This goes as well as can be expected. Jewel's dagger-like voice, demanding that April and Roy BEG for their jobs, causes foreground and background colors to change from orange to code red! 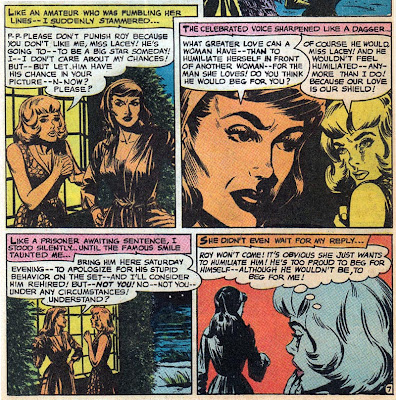 Meanwhile, back at the drive-in, April and Roy discuss their future careers while making out in triplicate. Roy is completely obsessed with the idea that it could be HIS face on the big screen, macking with a star as big as Jewel. April's uneasy heartbeats are mercilessly smothered by his lips. Sheesh, actors... 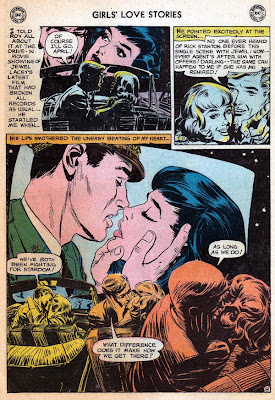 Over at Jewel's beach house, a glamorous shindig is taking place. April and Roy are invited to attend in order to suck up to Hollywood's best and brightest. There must be a catch! And there is. Jewel takes off with Roy and shoves April over to her own estranged lover, Gordon Dean. His pencil-thin mustache and white dinner-jacket are beacons of oiliness. Beware, April, beware! Hey, is that Debbie Reynolds over there by the indoor palm? Ooh! 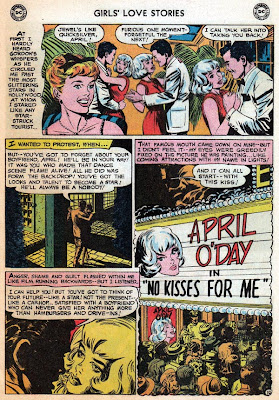 April has trouble fantasizing about her future super-stardom without bringing herself down. "No Kisses For Me" on the marquee indeed. She wakes up from this would-be scenario of prostituting herself to Gordon and tears herself away to find Roy, who NO! appears to be making his own deal with the devil. The devil being Jewel, of course.

Even party attendants like apparent Steve Allen, Danny Thomas, and Desi Arnaz and Lucille Ball cannot cheer April up at this point. Show business is a cruel mistress.

But don't worry! Outside on the beach of roiling emotions, who should come running along but formerly ambitious Roy. He claims he didn't prostitute himself either but we'll never know, will we? I mean, how long is he claiming he spent looking for April throughout the house? And who could focus on a nobody like April with the likes of apparent Danny Thomas on hand anyway?

Both lovers are crushed with shame and self-loathing before reclaiming their love and smashing their lips together once again. This can only help their acting. The waves pound the beach boulders for all of eternity and love is rekindled. For now. 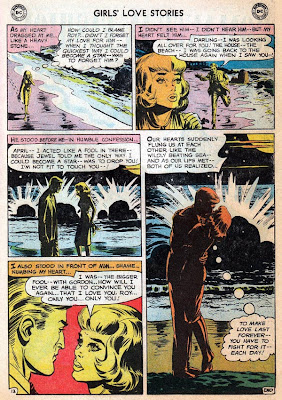 Check out the artwork on this ad. WHAT is going on with their HANDS?!