Halloween Shopping Items That Will Grab Your Eyeballs

Jackson wants to decorate the house really scary this year for Halloween. The jolly string of jack-o-lantern lights no longer appeases him. But we have quite a few little kids in our neighborhood who would not appreciate the realistic moaning animatronic flesh-eating zombies available at the drugstore. I know Halloween is supposed to be spooky, but with technological advancements, the gore factor in cheap products most likely made by child labor overseas has got me down. I mean, it's for KIDS, ultimately, who are dressed like butterflies as well as vampires in order to get their candy treats.

A touching Halloween memory: the house down the street from us in Washington was full of big guys, originally from the Ukraine. They put their hearts and souls into Halloween decorating and staged a haunted front yard every year. There were skeletons and gravestones and cobwebs and blacklights and scary sound effects. The guys dressed as monsters and leaped out from their front porch at trick-or-treaters, with one exception: when we came walking up (Jackson was five at the time), one of the guys yelled out, "LITTLE KID!" and all his brothers faded away into the shadows while their mom came to the door, dressed in her usual housewifely attire, smiling and offering candy. This went on all night, so big kids got the scares and little kids got a reprieve. That was thoughtful.

Anyway, I've been window shopping and here's some nice Halloween stuff I found. Spooky but not homicidal—that's how I like it.

I broke down and bought this really cute e.l.f. Disney Villains makeup kit, featuring Maleficent's Sinister Smoky Eyes. Also comes in Evil Queen from Snow White and Cruella de Vil—each one a palette of magnificent maliciousness. Perfect for drag queens, Halloween revelers, and girls in bands who need a little "stage presence." You're paying for a small amount of makeup in some boss packaging, but for $9.99 (at Walgreens), it's a decent impulse buy.

There's even a wee mirror because you're not only evil, but vain. The names of the eyeshadows are terrific: fog of doom, misfortune, forest of thorns and diablo, to name a few. 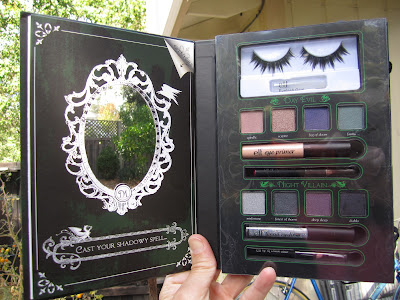 You get a day and night look because evil never sleeps. There's liner and lip pencil and check out the false eyelashes. I doubt I'll be wearing those much but they're very spiky and pretty. I tend to like to see out of my eyes with minimal obstruction (and glue). It's one of my crazy habits. 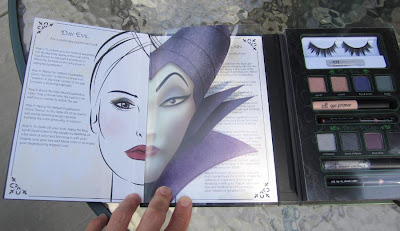 Next we're heading over to Cost Plus World Market where home decorating never ends. I like their classic, vintage, and dia de los muertos Halloween shops. More charming than terrifying and some of it is year-round goodness, especially if you're rather Goth in nature.

I would love to hang these vintage inspired figures around our front yard. They're like something out of old photos and quite dapper in their burlap duds.

Wouldn't it be awesome to serve cold-cuts from this Frankenstein Monster tray? I would use this year round. Yes, it's scary, but in a classic way.

None of the Dias de los Muertos items are made in Mexico, but the spirit (ahem!) of the season is apparent. I like the skeleton wind chimes and hanging cats sculptures. They would mark your house as the "cool one" on the block, for sure. 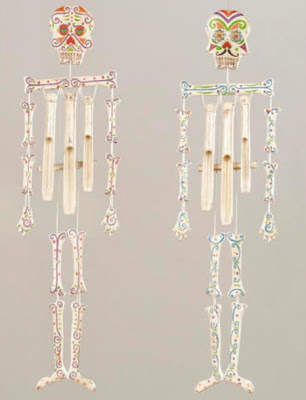 
And finally, let's window shop at the overwhelming array of gross Halloween candy at Oriental Trading Company. I would not eat any of this but it does have a certain "we have too much capitalistic fervor in our veins" attraction.