Hey, a new figurative sculpture (i.e., "statue") was just dedicated in Berkeley and The Chronicle's art critic, Kenneth Baker, figuratively barfed all over it. He didn't really vomit on the statue. It's mounted too high in the air for that. But he had some choice words, which I mentally translated as: aesthetically hurling. See what you think. I'll give you Mr. Baker's take and my own translation. Bay Area art criticism is so in need of translation; I should hire myself out.

Here it is: "Berkeley Big People" by Scott Donahue, at the pedestrian bridge at the Berkeley Marina. 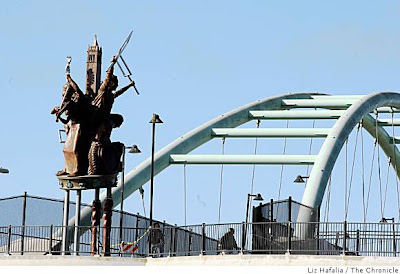 Baker: Donahue's dominant figures...represent protesters agitating for various causes. Perhaps from a vehicle...the sculpture...communicates a flash of appreciation for Berkeley's long contrarian streak. But viewed on foot, up close, it reads as caricature, and thus, as mockery. It turns any thought of activist politics into dismissive thoughts of political correctness.

Translation: East Bay piece of shit. Did I get 'political correctness' in there? (checking). Yes. Good.

Here's the close-up. My first thought: Cripes, that is a piece of shit. But what do I know? 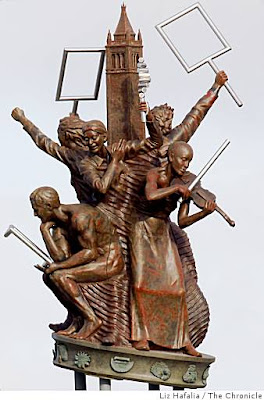 Baker: As sculpture, "Berkeley Big People" fails every test. Crucially, it ignores the fact that the best art of the past 50 years at monumental scale has systematically discredited the statuary conception of sculpture.

Translation: It's a fucking crap little statue! And a shitty one at that!
(So far Kenneth Baker and I are on the same page--CWW.) 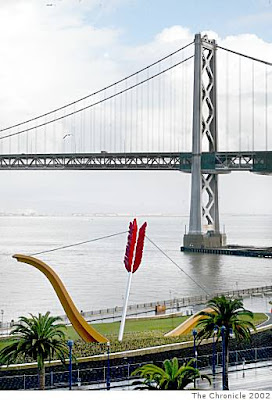 Baker: "Cupid's Span"...in San Francisco looks like representational sculpture. But its immensity, its visual echoes of the Bay Bridge and other associations - something about having one's heart pinned here, a reminiscence of Old World colonizers' masted ships - take it far from the literal impression it makes at first. I do not think "Cupid's Span" wears as well as some of the team's projects in other cities, such as "Clothespin" in Philadelphia, but it does have built into it the possibility of visual surprise on future encounters.

Translation: Why couldn't SF get "Clothespin?" Why must we get the left-overs after artists drop their best work back East? Why do I toil away on the West Coast anyway, where no one takes me seriously? I could be reviewing "Clothespin" for New York Magazine, but no, I have to come up with some kind of bullshit about pinning my heart here with a giant bow and arrow with some kind of colonizer reference to show I "get it." Like I fucking care!
(Personally, I think this looks like something from the children's department at IKEA, but I withhold all judgment until seeing it in person--something I've learned about giant art over the years - CWW.) 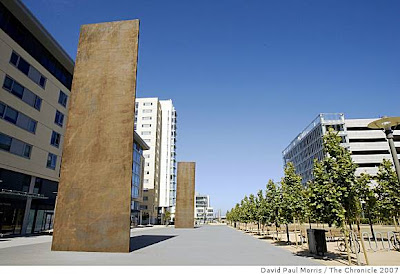 Baker: Richard Serra's "Ballast" deconstructs the statuary conception of sculpture. At a distance from the site, the work's structure appears obvious: One plate slants slightly to the north, the other to the south. Their divergence is the hallmark of the piece from outside in. But stand between them and look first at one plate, then at the other, and both appear to tilt rightward, which makes them look identical.

This simple phenomenology of "Ballast" has much to show us about the condition of vision that no representational sculpture could reveal. It concerns the embodied nature of vision, which eludes representation - even in the hands of a master such as Cézanne - and which only a viewer's direct engagement can clarify.

Baker goes on for a bit more but he lost me at "deconstruct." The word "deconstruct" should be shot and thrown into a ditch as far as I'm concerned. If you are using that in your writing about art, stop. Stop right now. Find another word, then go forth. Baker's word-fun also includes "remnant of vanquished hopes for a future of thrillingly progressive evolution in taste and thinking," and "artistic obsolescence." Whoo! Now go get that lunch, Mr. Baker; you've EARNED it.

Source: SFGate
Posted by Miss Lisa at 7:00 AM

Email ThisBlogThis!Share to TwitterShare to FacebookShare to Pinterest
Labels: art for what ails ya, California, San Francisco

holy shit! i know exactly where that is, Patrick and i used to live on 5th and Addison. Man! very ugly. Funny too. Berkeley!

Richard Serra's newer work with the giant pieces of metal just makes my blood boil! There is not another artist that gets me so Effing angry!