Not a paid endorsement. I shop at Dollar Tree (Pear's Soap--one dollar!). Since the economy's in the toilet and Keith and I are unemployed, it just makes sense. Today I was looking for fireman costume props for Jackson's costume and Dollar Tree was there for me: a plastic axe, a crow-bar, a whistle and a Fire Chief badge--all together for the low, low price of...one dollar.

I almost gave in and bought a costume for him at a (very crowded) party store. I thought for $19.99 (clearance), an all vinyl firefighter costume might do. And I wouldn't have to make anything this year. But in the end, I could not bring myself to do it. If I knew he'd play with it a lot, I would, but he's not much of a fantasy role-playing kind of guy. OK, that's not true. He still pretends to be a garbage truck, but he's never pretended to be an actual other person. And there's lots of good firefighter ideas at Coolest-homemade-costumes.com, which is where I learned how to make his last two garbage truck costumes. Now I am a pro at making a small boy look like a garbage truck. So why can't I find a decent-paying job!? That is another post all together.

Here's some Dollar Tree Halloween cheapness for the bargain shopper. Don't let the financial times get you down. There's always going to be plenty of crap available for, yes, a dollar.

Plump & Ripe! Any child would love to receive some Zit Poppers in their treat bag. Good practice for adolescence. 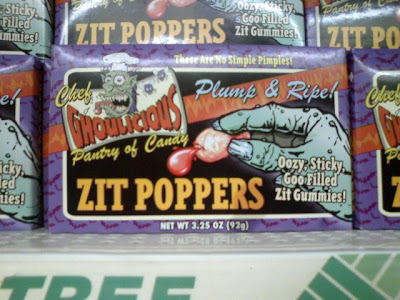 Bat Organs With Bat Brains! Do bat brains look like this? I've never dissected a bat. These kind of look like wee bitty people brains. I'll take their word for it. 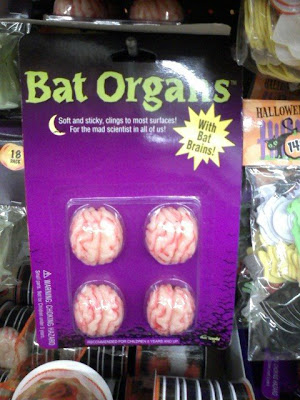 Lovely snow globes will lend an atmosphere of Gothic beauty to your desktop or fireplace mantel. 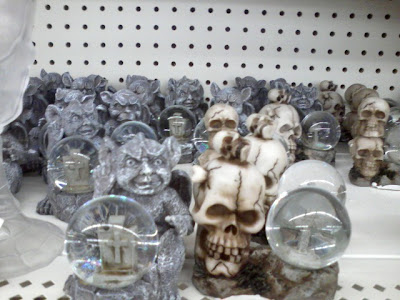 Speaking of Gothic...this collection is a screaming good deal. Our neighbors hung a bunch of these from the trees in their front yard. Festive! 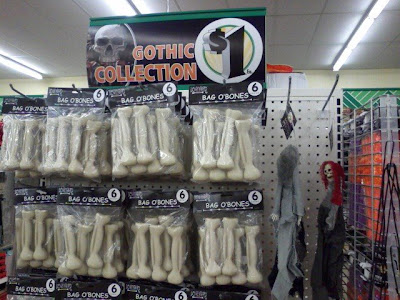 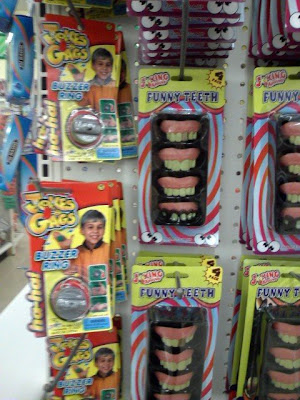 Hey, stuffed animal man, if you don't want to be snuggled, then next time go as "barbed-wire man." 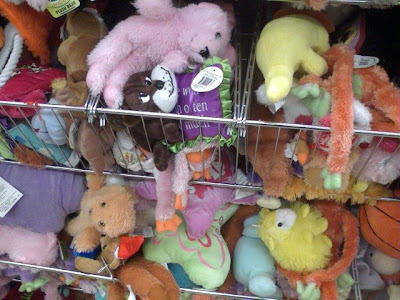 Take an empty 1-liter bottle, cover with aluminum foil, flip it upside down, attach a hose from the opening to Jackson's face. Not sure what to use for the face part that's safe. Perhaps recycle that hard plastic packaging that always encases toys?

Do you want to borrow Eric's Fire Engine costume? It's just a fire engine on suspenders. He wore a yellow rain slicker for his fire man suit. I could probably ship the fire engine to you, but I'm not sure Jackson would fit (it barely fits Eric).

Hi Morningside--thank you but no need to ship. This year Jackson will go as an actual fire MAN. Not a vehicle. It's a step in the right direction as far as I'm concerned because I don't have to transform a box into an elaborate truck with a hydraulic side-loader (as I did for the garbage trucks he went as two years in a row). I found some great fireman (and fire truck) costume-making tips here:
http://www.coolest-homemade-costumes.com/firefighter-costume.html#c4