This Halloween, Don't be a Tool

October 31st is coming and the Halloween costume supply market is cranking out the big guns--trying to convince you to BUY a costume. You don't have to BUY anything for Halloween, except maybe some candy and a big pumpkin for carving (if you're craving a gucky, perishable craft project). That's the beauty of Halloween. It's the holiday of YOUR IMAGINATION... (cue twittering birds, calliope music and sparkle graphics).

You don't have to go as a sexy Spongebob Squarepants. Even this model looks embarassed by the very concept. Is it me, or is the world getting tired of these sexy costumes? Sexy Alice in Wonderland; sexy letter carrier; sexy gothic punk-rock vampire fairy bat. OK! OK! We GET IT! You're sexy on Halloween. Now go find the guy dressed as "party in his pants" and leave us alone! 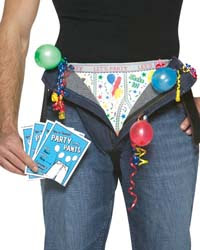 And hey guy--you don't have to buy the "party in your pants" costume. Just make a party in your own pants (or better yet--don't).

This adult taco costume costs $69.99. Think of the bags of groceries this could buy. Think of the hundreds of ACTUAL tacos it could buy. You could buy 700 tacos and throw a party. Dress up as the taco-serving guy. You will get more action--I promise you. 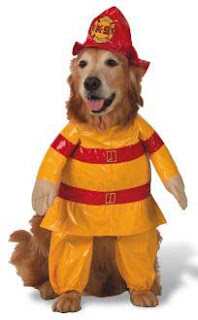 I think I would look good in that SpongeBob costume, do you think they have drag queen size?

That or the Golden retriever costume. But the fur might make me sneeze.